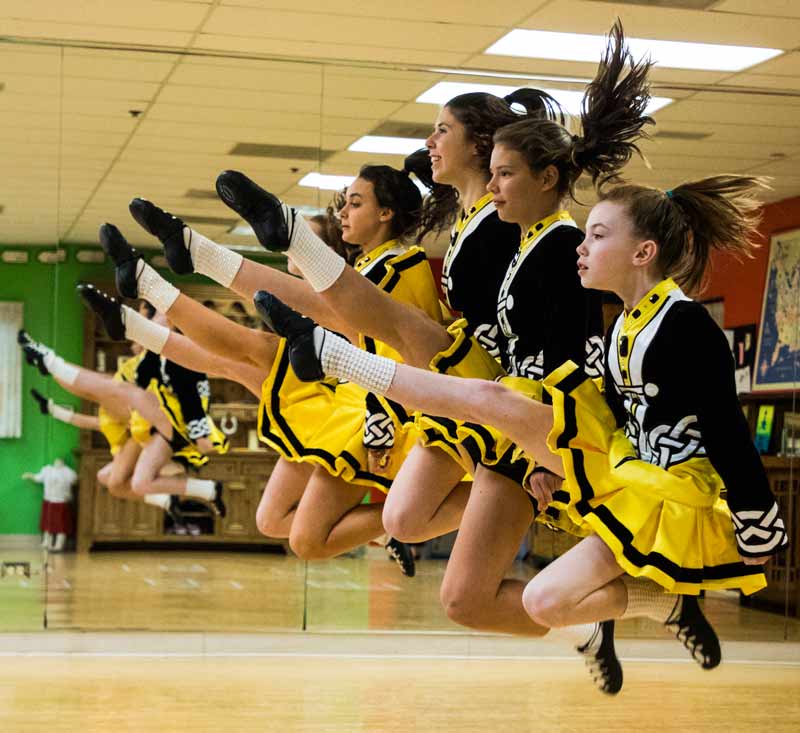 This month, a team of young champion dancers from Sheila Tully’s Academy of Irish Dance in Glenview is diligently putting the finishing touches on the slices, birdies, kick ups, boxes and click backs that, together, form the complex routine they’ll perform at the 2018 Oireachtas Rince na Cruinne.

Oireachtas Rince na Cruinne is Gaelic for the Irish World Dancing Championships, better known as “Worlds,” taking place in Glasgow from March 24- April 1. Sometimes referred to as the Olympics of Irish Dance, Worlds has been held annually in cities throughout Britain, Ireland and North America for more than 40 years. The competition regularly draws approximately 5,000 competitors and 25,000 spectators from 30-plus countries.

This year in Glasgow – the host of Worlds on four previous occasions– officials estimate the weeklong international event will boost the local economy to the tune of £14 million.

Thirty-four Tully Academy dancers, together with their parents and siblings, will spend spring break in Glasgow for the competition. In addition to shelling out thousands of dollars for airplane tickets and hotel accommodation, parents spend between $2,000 to $3,500 on the handmade Irish dancing costume, curly wig, shoes and sparkly socks worn by all female performers.

And while the competition at Worlds is fierce, parents steeped in the sub-culture said it has none of the infighting and rivalry depicted in the popular reality show Dance Moms; the spirit of Irish dancing is entirely friendly.

“From the outside, with the elaborate costumes and wigs, I can see how it looks like a pageant,” said Highland Park resident Erin Cohn, who grew up Irish dancing with her four siblings. “But it’s as much about dance as it is about friendship, discipline and respect.” 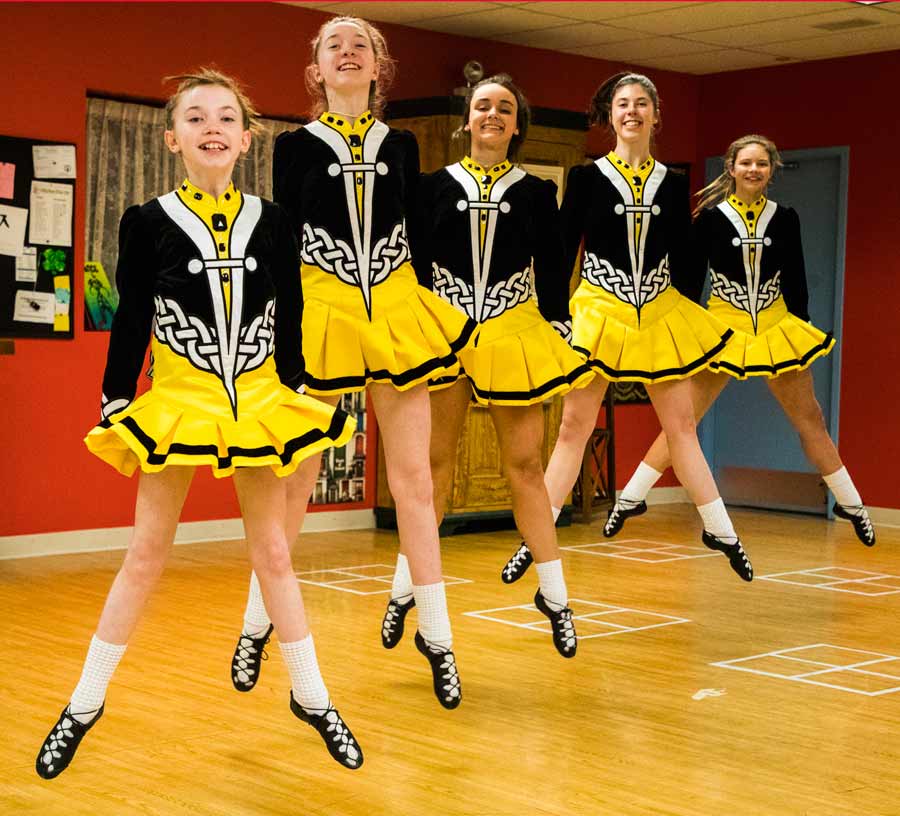 Dancers with the Sheila Tully Academy of Irish Dance. PHOTOGRAPHY BY JOEL LERNER 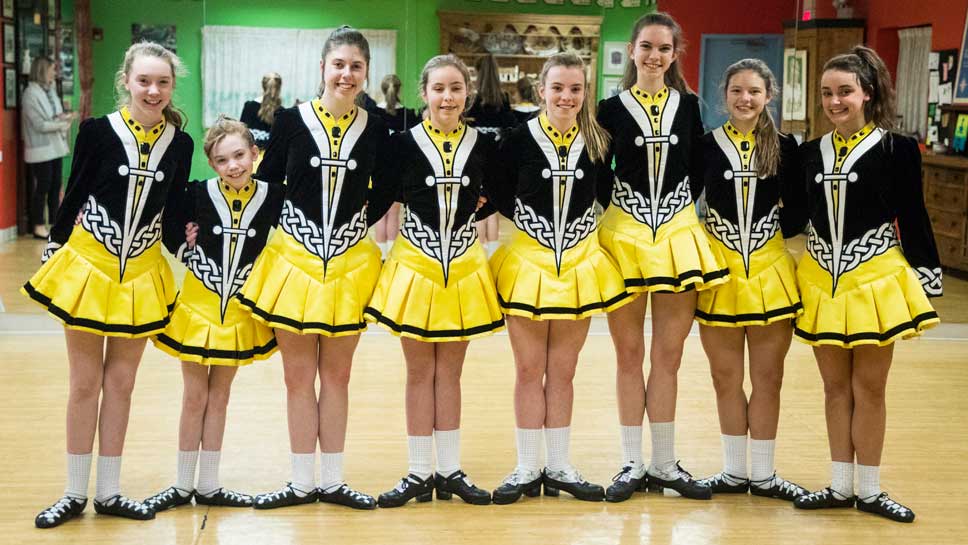 Cohn is accompanying her 16-year-old daughter Riley to Worlds for the second time; Riley also qualified as a soloist dancer in 2016.

“We have so much fun traveling as a group to watch these girls perform, said Cohn. “Everyone gets along.”

Unique to Irish dancing, said Cohn, is the “do-over” button. There’s no penalty if a dancer falters or falls during competition, as long as she recovers and begins again.

“The judges treat it as a life lesson,” said Cohn. ‘The values of Irish dance reflect how we want to raise our children. Everybody makes mistakes, but having the courage to get back up again is what counts.”

Nevertheless, the Irish dancers at Sheila Tully Academy have a long history of success. In the 2016 Worlds competition in Glasgow, Tully’s Choreography Team won first place.

“Tully dancers are always impeccable,” said Erin Cohn. “Sheila herself is such an artist and perfectionist.”

Tully Academy Instructor Sheila Healy has been teaching at the studio for 10 years. Healey began Irish dancing at the age of 3, eventually turning pro and touring the world as a member of the Trinity Irish Dancing Company. Irish dancing, said Healy, can be loosely divided into two time periods: Pre and Post-Riverdance.

“I remember watching them on TV when I was 10 years old and being totally mesmerized,” said Healy. “I started dreaming of becoming a professional Irish dancer.”

Riverdance, the wildly popular Irish dance show that burst onto the international scene after their debut at the 1994 Eurovision Song Contest, and has since appeared at more than 450 venues worldwide, marked the beginning of the Irish dancing renaissance. What had previously been considered a staid, centuries-old Irish tradition became a bold, new, modern performance art. Enrollment at Irish dancing schools soared.

For today’s young Irish dancers –many first or second generation Americans – studying, competing and performing is an expression of their cultural heritage.

Lucy McGuire, a 16-year old junior at Loyola Academy in Wilmette, has danced 4-5 times a week with Sheila Tully Academy for the better part of her life.

“When we travel and perform, I always come home knowing a little more about Ireland,” said McGuire.

Like all Irish dancers, McGuire started off in a soft, leather lace-up shoe, but gradually moved on to the more challenging hard shoe. The hard shoe closely resembles a tap shoe, but functions more like a toe shoe worn in ballet.

“Just walking across the floor in a pair of hard shoes is difficult,” said Erin Cohn.

“I love watching them perform,” said Cohn. “It never gets old.”

In their bright, embellished costumes, sparkly socks, and curly headpieces, the young dancers at Sheila Tully Academy are ready to kick up their heels in Glasgow, and maybe even bring home a trophy.

May the Luck of the Irish be with them.