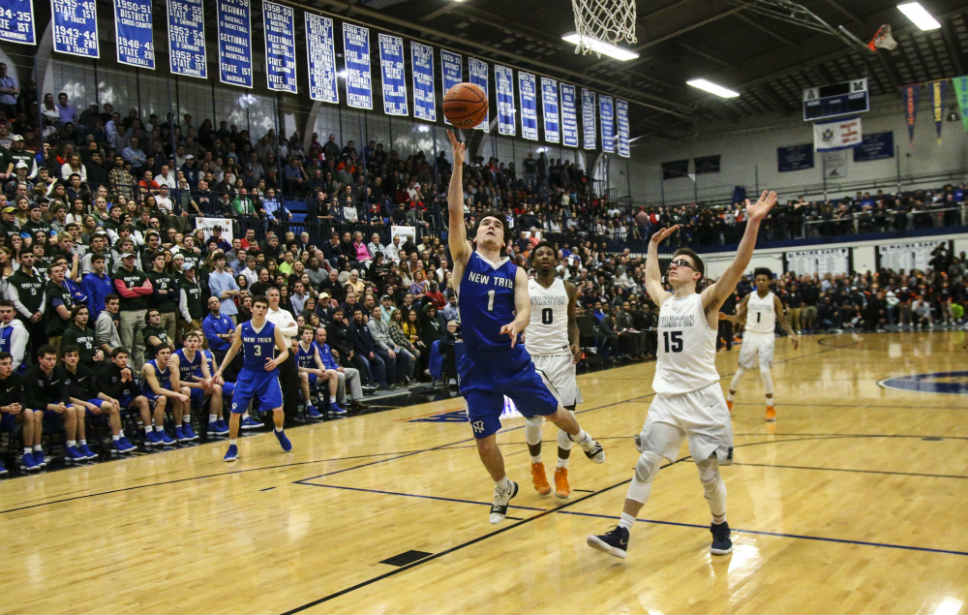 Andrew Kirkpatrick of the Trevians puts up a shot during the sectional title game at Maine East. PHOTOGRAPHY BY JOEL LERNER

Griffin Ryan, carrying a book, boarded New Trier’s boys basketball bus for a road game this winter. The senior guard/forward got teased by a teammate or two for attempting to absorb a chapter or two before tip-off.

Trevians senior point guard Andrew Kirkpatrick wasn’t one of them.

“Andrew noticed the book, and we talked about it on the way to our game,” Ryan recalls. “He was excited to discuss it with me; he had read the book three or four times.

“Andrew Kirkpatrick,” he adds, “reads … a lot [mostly fantasy and sci-fi books]. One summer, I think, he read close to 100 books. I am not exaggerating.”

Attempting to read Kirkpatrick’s face — during or after a basketball game — for clues about how New Trier was faring, or how NT had performed, was essentially futile in 2017-18, a thrilling 25-6 season that ended with a 69-57 loss to Evanston in the Class 4A Maine East Sectional final on March 9. The 6-foot-2, 170-pounder sported the same look: placid, businesslike, bordering on blank.

Picture a driver in a car waiting for the light to turn green, and you’d have a pretty good idea of what Kirkpatrick looked like in the first minute of the first quarter and in the last minute of a taut fourth quarter.

“That’s part of what a point guard should do — show a calm demeanor, at all times,” says Kirkpatrick, one of NT’s three all-Central Suburban League South selectees this winter (with Ryan and junior center Ciaran Brayboy). “I got pretty heated during games, but what good would it do to come across that way to my teammates? Everybody looks to a point guard to take care of things. You want your teammates to look at you and think, ‘OK, Andrew is not upset; we can continue to play loose basketball, and we’ll be fine.’ ”

Kirkpatrick averaged team highs in points (11.5), assists (3.6), steals (1.2) and deflections (1.6) in his third varsity season in 2017-18; he paced the 2016-17 club in the same categories. The team leader in three-pointers also shot close to 85 percent (another NT-best figure) from the free-throw line in his final season in a Trevians uniform.

“One of the best playmakers I’ve ever seen,” says Ryan, who nailed his first pair of three-pointers off passes from Kirkpatrick in Kirkpatrick’s 13-assist game against Niles North last winter. “His smart decision-making, his calming influence, we relied on him for those qualities each game. We’d see Andrew with the ball, late in a game, and knew we’d be OK.”

Kirkpatrick had the ball, late in the fourth quarter of the Maine East Sectional semifinal against Niles North on March 7, and he had a 56-second span reminiscent of the two goals the Chicago Blackhawks produced in a late 17-second stretch to stun the Boston Bruins in Game 6 and clinch the 2013 Stanley Cup Final.

Kirkpatrick hit a trey to cut Niles North’s lead to 59-57 with 1:03 left in the fourth quarter; he then made a basket to tie it at 59-59 20 seconds later; his final bucket in regulation, at the 0:07 mark, forced the first of two overtimes in a game New Trier (after trailing by 22 points late the third quarter) would win 77-72.

His expression after each clutch moment was … expressionless. The unsaid message to his teammates: Keep working, keep battling, stay laser-focused.

“He performed at a high level on the big stages,” Trevians coach Scott Fricke says of a player who scored nearly 750 points in his varsity career, while amassing more than 200 assists and ending up with more than 100 steals, 100 three-pointers and 100 rebounds. “And Andrew did a lot of things, valuable things, on a basketball court that aren’t measurable. The kid … he didn’t want to come out of any game, and he played hard, gave everything he had every minute he was out there on a court.”

On golf courses, as a junior, Kirkpatrick helped New Trier’s varsity take runner-up honors at the Class 3A state tournament in 2016. The No. 5 or No. 6 scorer on the team, he shot a round of 72 in at an invitational (won by NT) and carded consecutive 78s at regional and sectional meets.

Kirkpatrick — a son of former Northwestern University men’s cager Kip Kirkpatrick (a 6-5 guard/forward who played in 108 games for the Wildcats from 1990-94, with a career field-goal shooting percentage of 47 — chose not to go out for golf last fall and focused solely on basketball (when he wasn’t eyeballing a book’s pages) as the leaves and temperatures fell.

“We had high expectations this season,” says Kirkpatrick, who intends to attend a prep school for a year before enrolling at a college. “We had talked all year about making it to state [Final Four], because we had a lot of good returning players with experience. We knew this year could be a special one.

“We hated losing. Hated losing more than other teams did.” 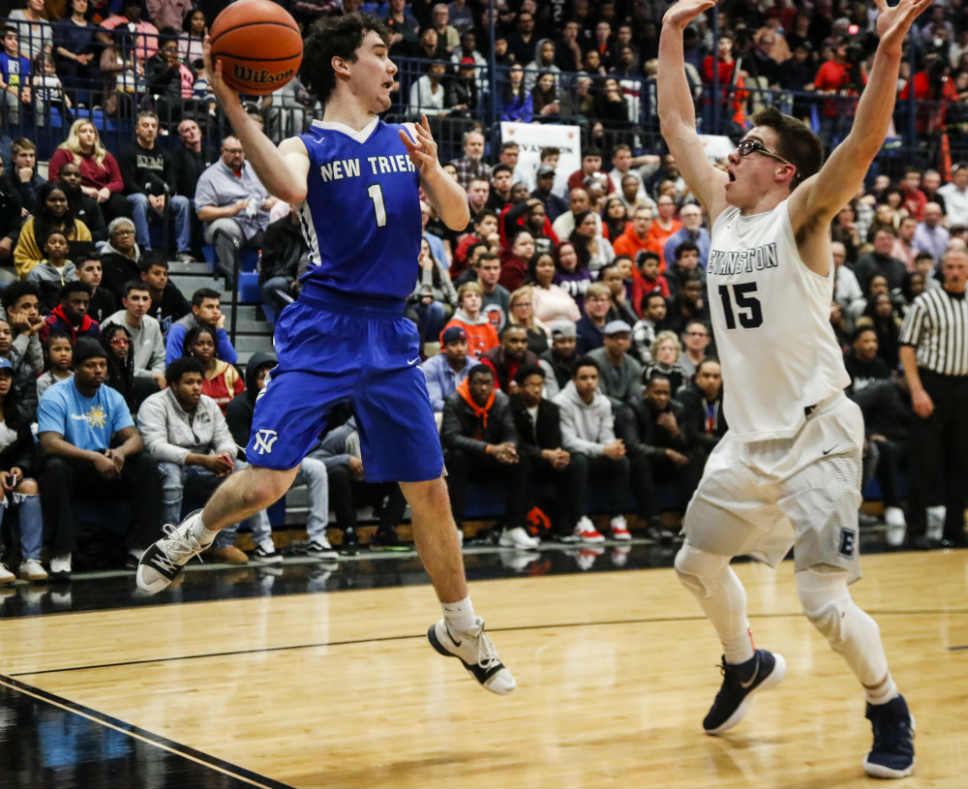 Andrew Kirkpatrick keeps the ball from going out of bounds against Evanston. PHOTOGRAPHY BY JOEL LERNER 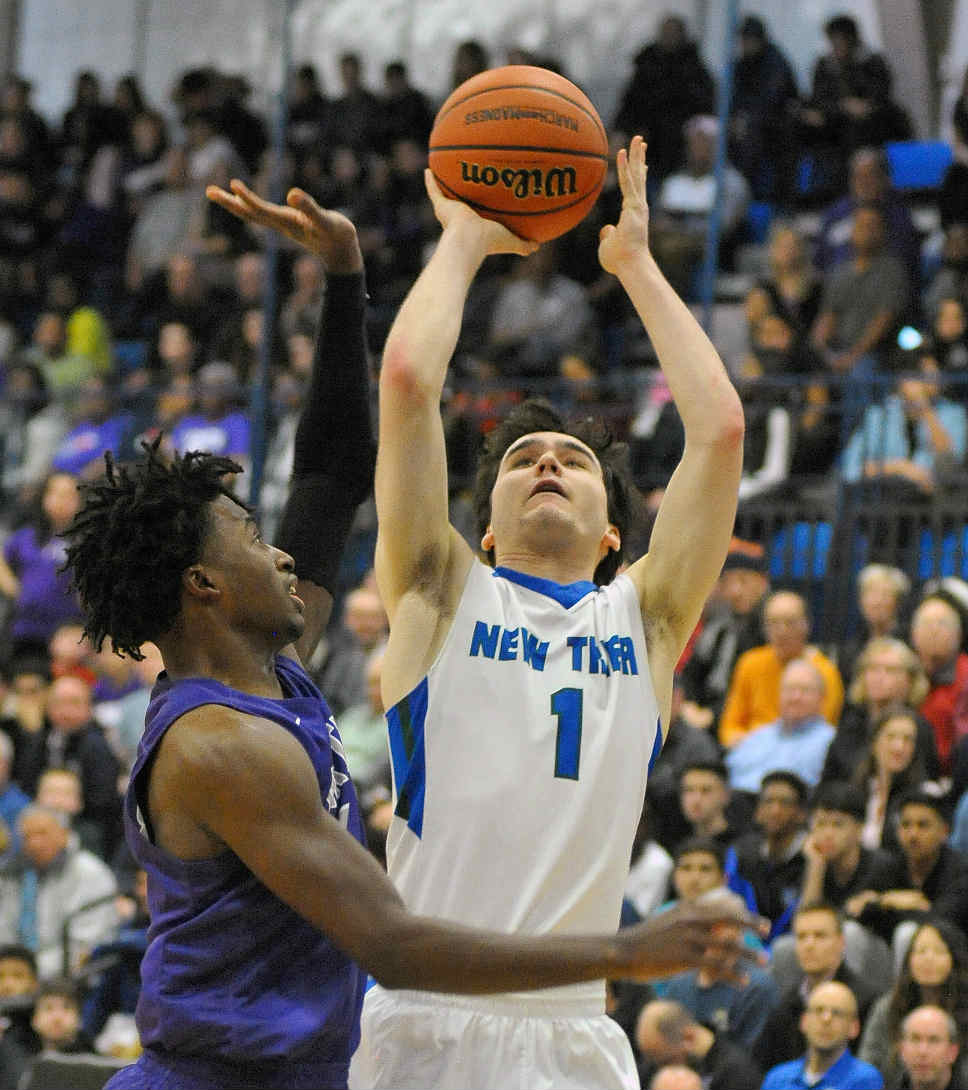 Andrew Kirkpatrick fires up a shot against Niles North in the sectional semifinal. PHOTOGRAPHY BY JUDY FIDKOWSKI 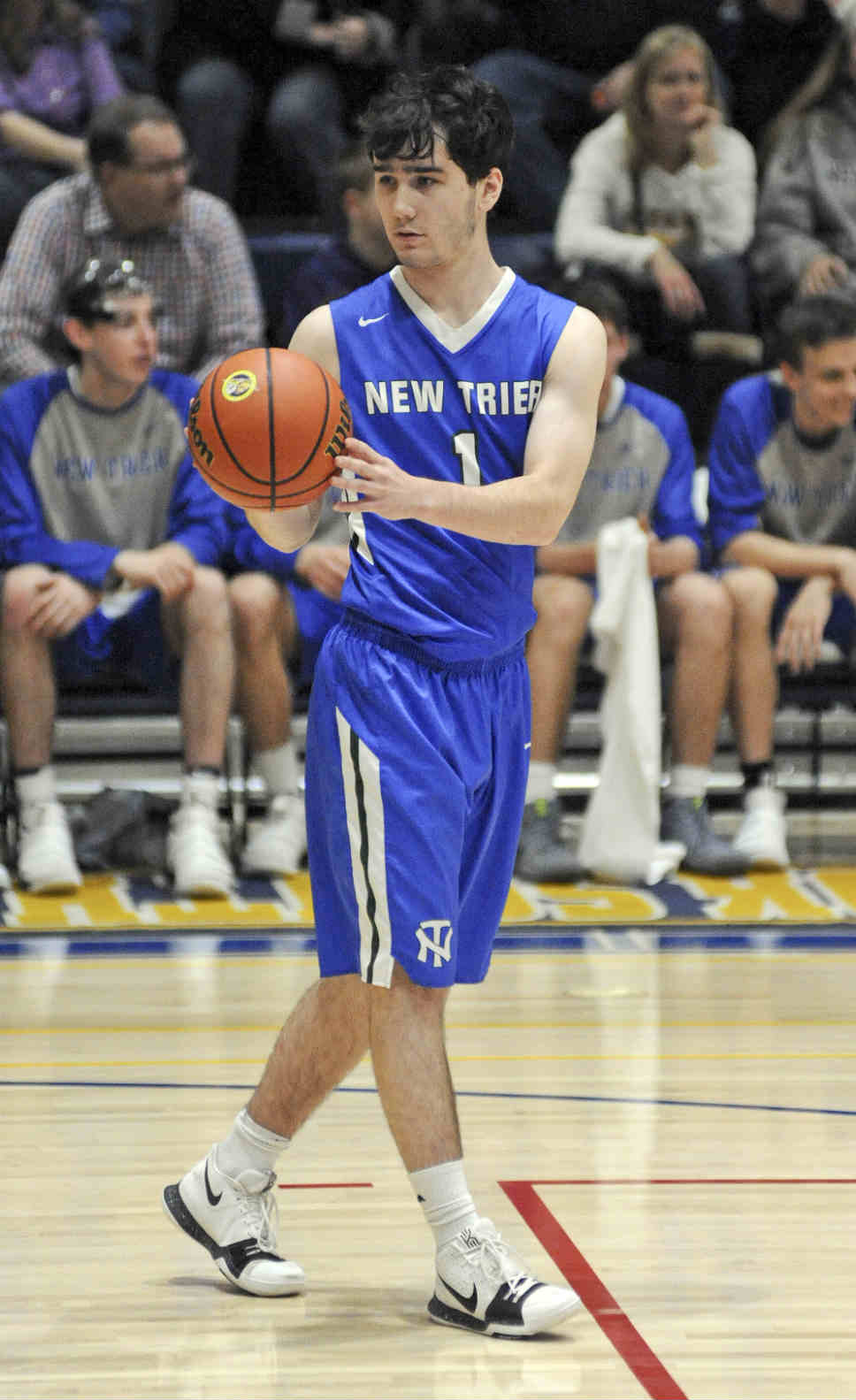 Andrew Kirkpatrick holds on to the basketball against Glenbrook South. PHOTOGRAPHY BY GEORGE PFOERTNER