Students at New Trier High School’s east and west campuses walked out on March 14 to protest gun violence and show solidarity with victims of gun violence in schools. Although there was no official headcount, hundreds and possibly a thousand students gathered on the east campus track field in Winnetka.

The protest organized by the Student Alliance and other student groups and was held at 10 a.m. for 17 minutes to coincide with a National School Walkout organized by Women’s March Youth EMPOWER, and to commemorate each life that was lost in the shooting at Marjory Stoneman Douglas High School in Parkland, Florida, a month ago today.

Students released 17 balloons into the sky and held up signs with slogans such as “Books Not Bullets” and “If Only a Student Had as Much Protection as a Gun Does in this Country.” Many students wore the color orange, the official color of the protest.

Eden Hirschfield, a senior who was behind the walkout’s official orange T-shirt, attended the event wearing one of the shirts. The orange t-shirt reads “Protect Kids Not Guns” on the front, and on the back states “Policy & Change” under a crossed out “thoughts and prayers.” Hirschfeld said that while the T-shirts were a last minute idea and only sold on-line for three days, the Amnesty International Club managed to sell over 1,300 of them to students all over the Chicago area.

“It meant a lot. I think it is awesome that so many people got to to wear these T-shirts and participate in this event,” Hirschfield said.

Aviv Crystal, a junior, also participated in the walkout. “I think it is important but with the administrative influence it loses its value,” Crystal said. Crystal was directing his comment at the school administration’s decision to create a free period in advance of the walkout, allowing students to choose to whether to join the walkout or go to other areas in the school such as the cafeteria or the library. Crystal said the walkout was aimed at achieving broader gun restrictions and more safety protocols at school.

Amelia Kittle, a junior, viewed the walkout as a success. “It was a success because there were a lot of people who joined in on the chanting and some brought signs,” she said.

Some students who are against gun control also attended the walkout to see what it was all about. Abdel Elashry said he went to a small portion of the event, but didn’t agree with some of the students’ views about gun control measures. “In general I thought the perspective showing respect to the victims was really good,” he said.

While members of the public and media were not permitted on campus — a Winnetka police car blocked off road access at the intersection of Essex Road and Winnetka Avenue beside the track field — some residents and parents stood on the sidewalk holding signs in support of the walkout.

“I think it is pretty awesome that we are taking our cue from high school kids. Something has got to be done,” said Helen April, a Wilmette resident.

Christine Guthrie, a Kenilworth resident with three children at New Trier, twins who are seniors as well as a freshman, said all of her kids participated in the walkout. “I am thrilled. I think we have woken up a dangerous generation. These kids are media savvy. They were brought up to believe that they can do anything and make a change. They shouldn’t have to live in fear,” Guthrie said. 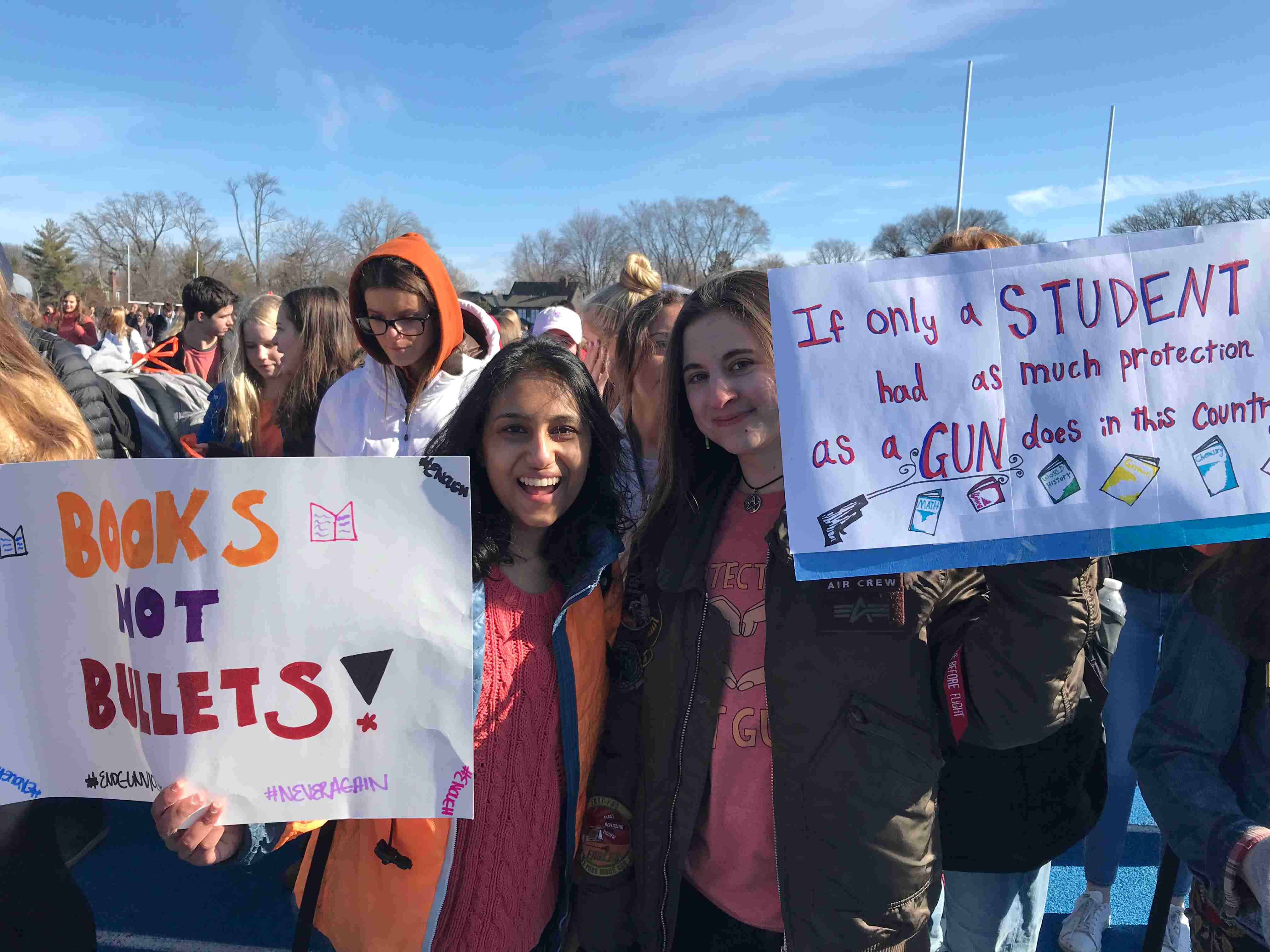 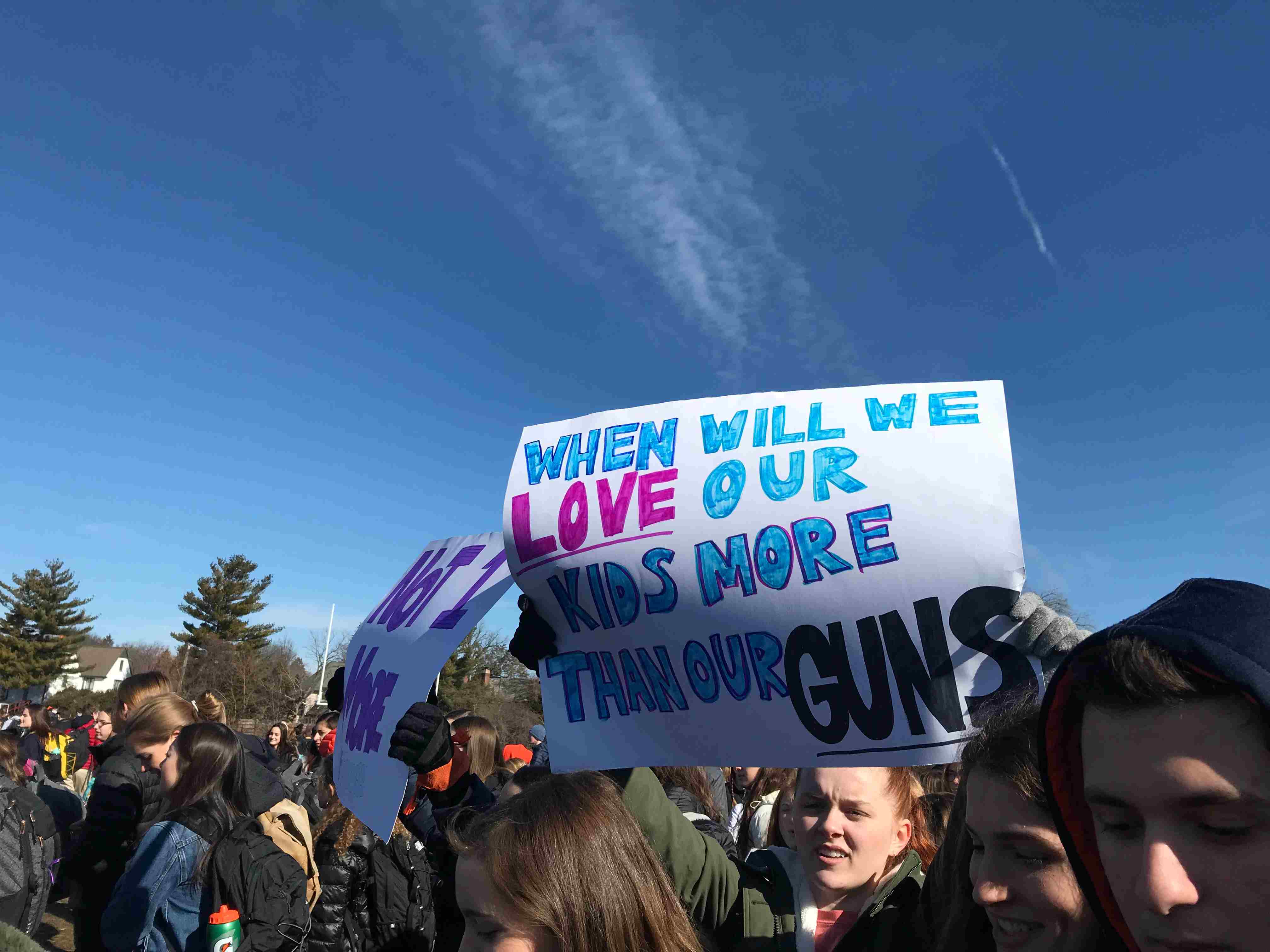 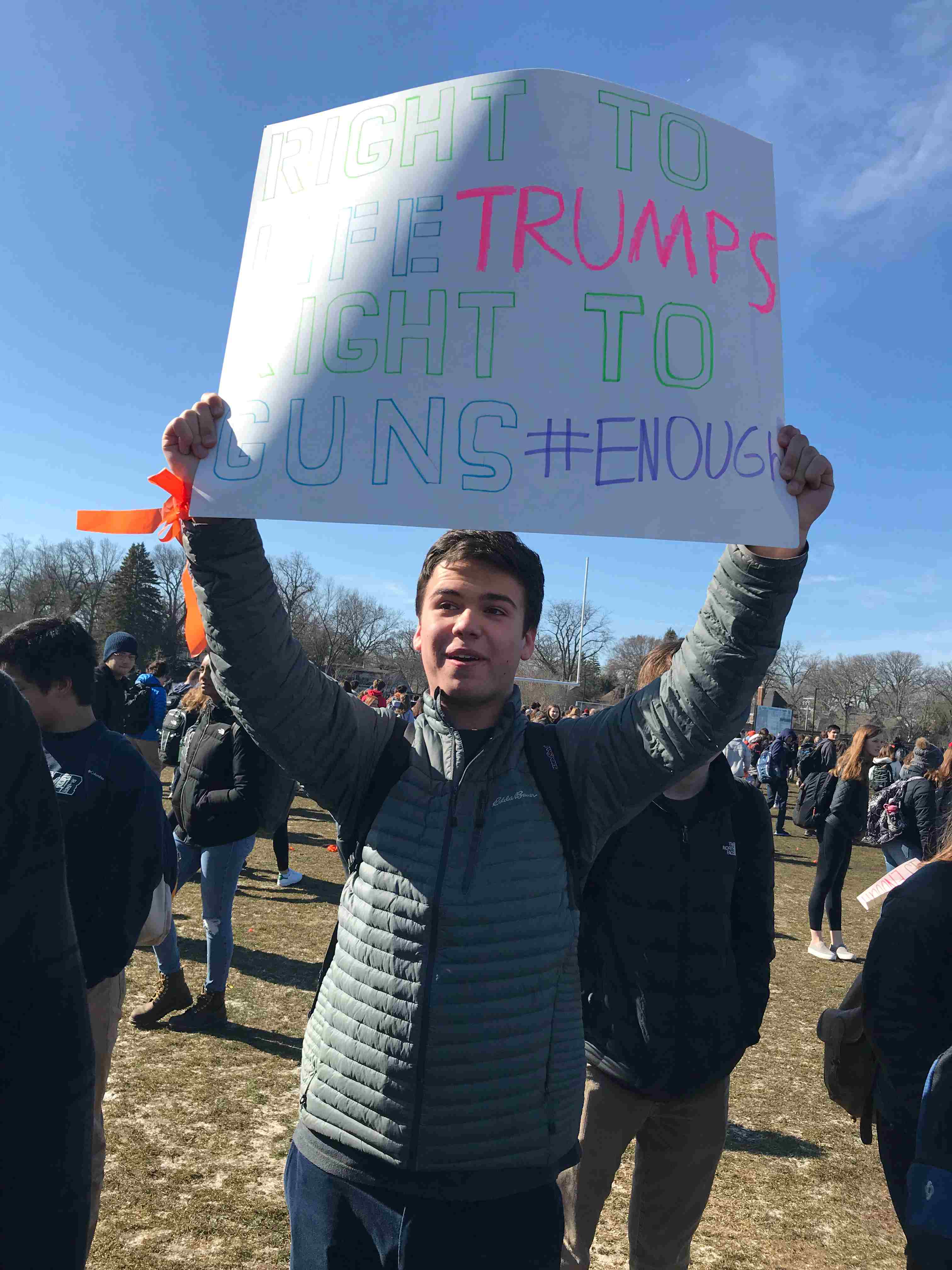 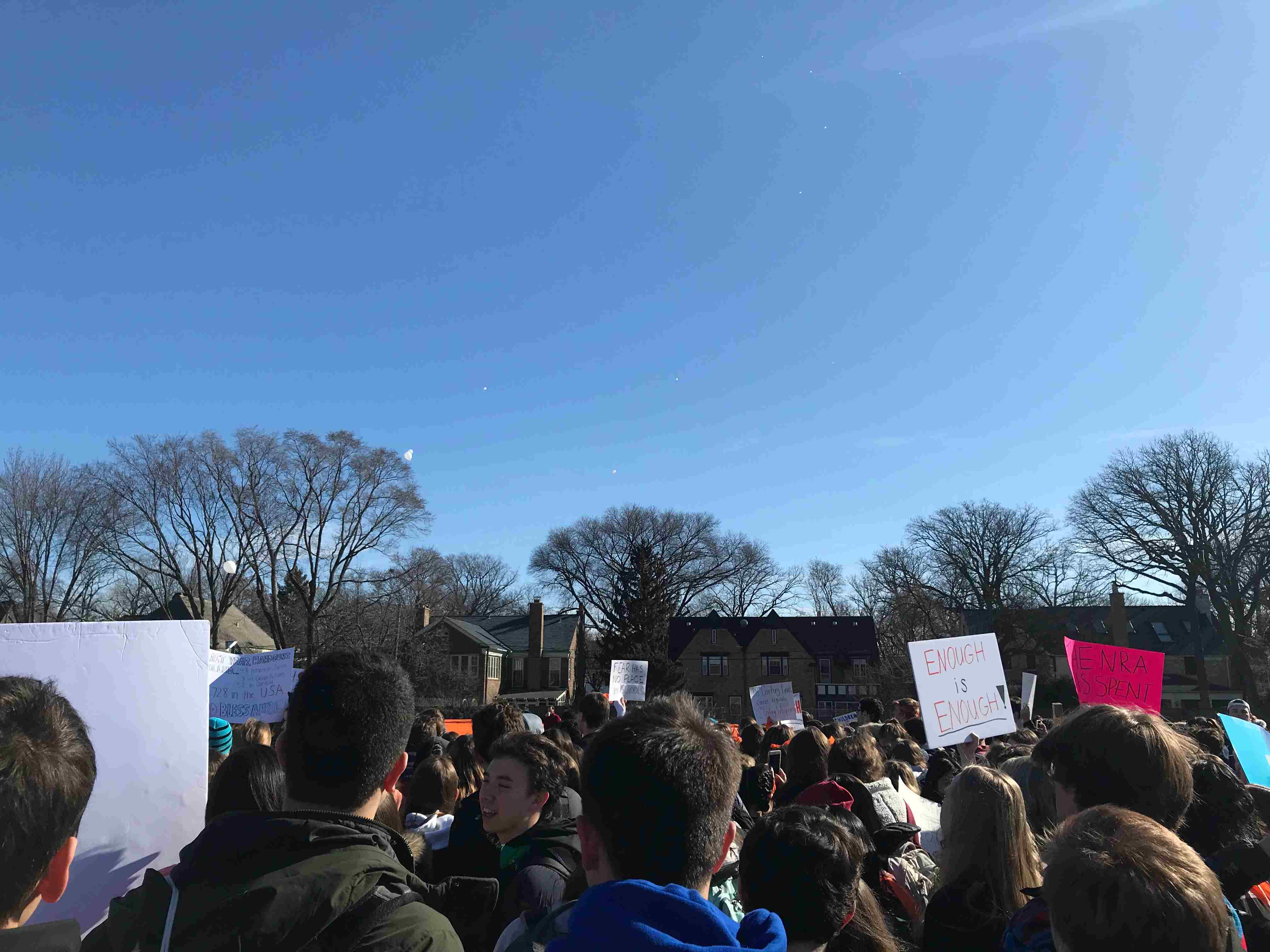 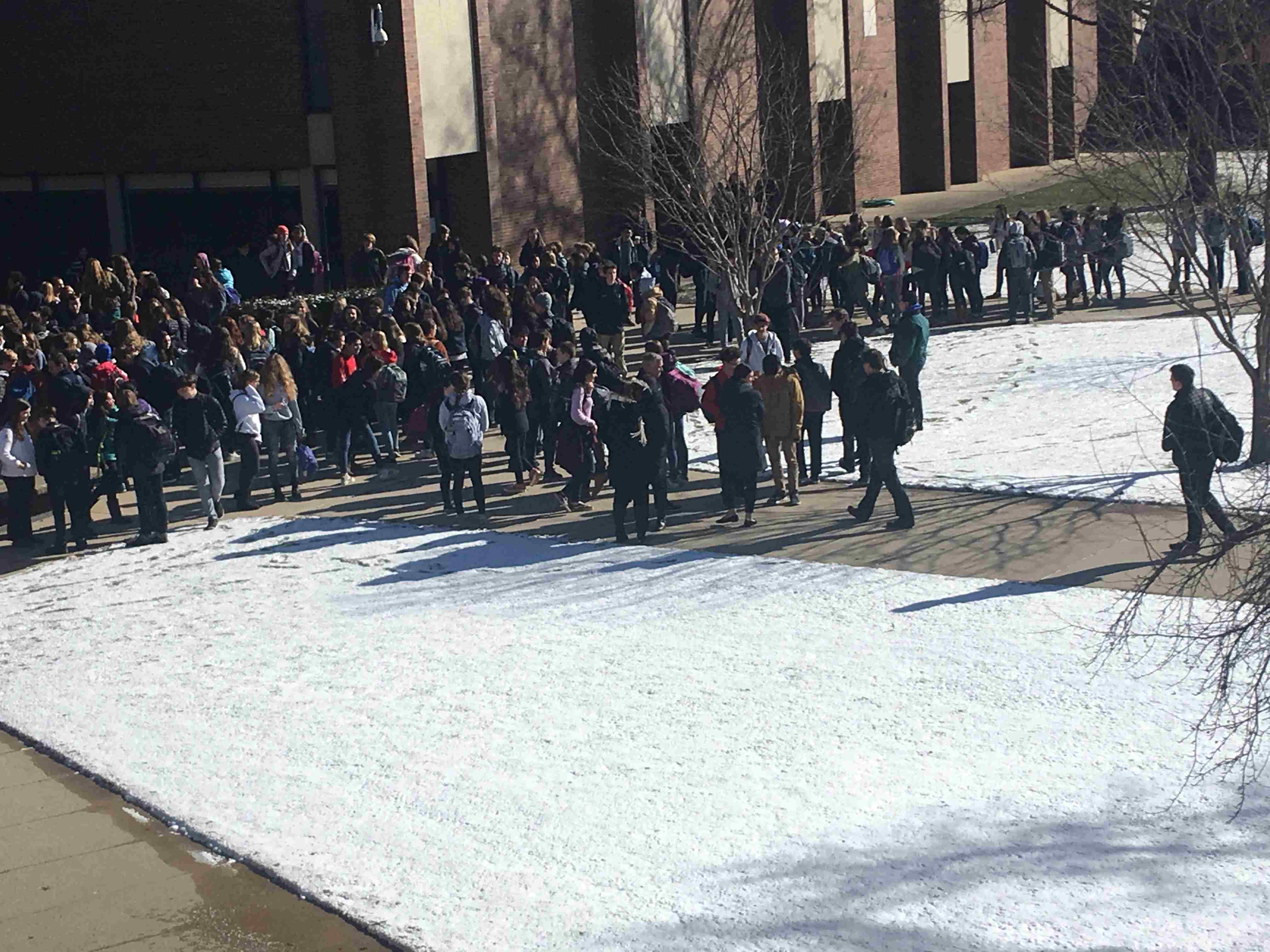 Students at the Northfields campus gathered in the student commons. Photo courtesy Rose Bacchus, a freshman at New Trier.