LAKE BLUFF — A proposed ordinance regulating short-term residential rentals in Lake Bluff is on its way to the village’s Plan Commission & Zoning Board of Appeals for a public hearing.

The Village Board of Trustees meeting as the Committee of the Whole narrowly decided March 12 at Village Hall to send the ordinance to the PCZBA with Village President Kathy O’Hara casting the deciding vote.

The PCZBA will consider the proposed ordinance and possibly make a recommendation to the board at 7 p.m. March 19 at Village Hall.

As currently written, O’Hara said the ordinance is a two-year pilot program setting limits on such things as what real estate is eligible, the minimum stay required, parking regulations and safety requirements.

“If we don’t like the way it is working we don’t have to continue it after two years,” said O’Hara.

O’Hara said the village has taken a very close look at the issue of short-term rentals over the last year. There have been a number of discussions by the board as well as a workshop session on a Saturday earlier this winter.

“Pretty much every concern that people had was addressed,” said O’Hara. “There’s a minimum two-night stay and all sorts of safety protections.”

Ankenman, who has continually advocated for a prohibition on the practice, said she wants the current policy to remain in place. People can rent residential real estate in the village as long as it is for 30 days or longer.

“People should not have to be concerned with constant turnover by their next-door neighbor,” said Ankenman. “I do not want to change the current regulation to permit anything shorter.”

The public hearing will not be the first by the PCZBA. Village Administrator Drew Irvin said when a potential short-term rental ordinance was considered by the PCZBA last summer, after two sessions it asked the board for direction.

This time Irvin said the trustees and O’Hara want the PCZBA to consider lot size, the minimum length of stay and life-safety issues. As currently written, the proposed ordinance requires all homes rented out on a short-term basis regardless of age meet 2018 safety requirements. This includes things like smoke detectors and carbon monoxide detectors.

Some of the regulations in the proposed ordinance limit rentals to a person’s primary residence not a vacation or rental home. The owner must reside there at least 275 days. There can be no more than 10 guests per night. The homeowner must register each year.

Short-term rentals cannot be booked more than 45 days or 15 times during a calendar year, whichever occurs first, according to the proposed ordinance. All parking must be on the property.

At this time, Irvin said there are no traditional bed-and-breakfast accommodations in the village. If there were, they would be governed by state law. He said if someone wants to open a bed-and-breakfast establishment, they would most likely have to apply for a special-use permit and go through the normal approval process. 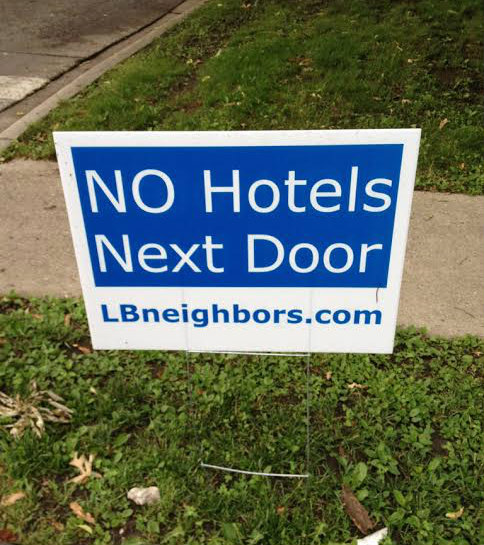 Lake Bluff residents who oppose short term rentals are posting signs like these around town.