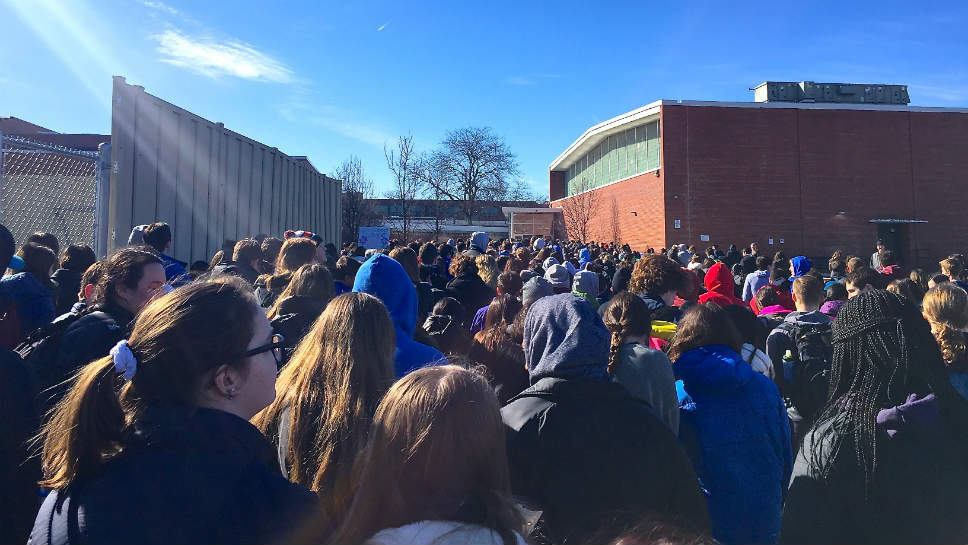 HIGHLAND PARK –  Hundreds of students attended the March 14 walkout at Highland Park High School to commemorate the the 17 students who were killed at Marjorie Stoneman Douglas High School in Parkland, Florida one month ago. The event was part of a National School Walkout organized by a branch of the Women’s March called Youth EMPOWER.

The walkout originally was scheduled to take place from 10 to 10:17 a.m. symbolizing one minute for every student who died.  But the first of two groups of students began walking out at 9:45 in order to arrive at Port Clinton Square on Central Avenue at 10 a.m.

The Highland Park Police Department was out in full force, as the campus was closed to outside visitors to ensure students’ safety. Blockades were also set up throughout downtown Highland Park.

Police Chief Louis E. Jogmen said he was very impressed with how the students handled themselves. “They were well organized and we appreciate them working with us to get the supportive message across in a safe way,” he added.

McGregor gave an impassioned speech in Port Clinton Square ending with, “We’re going to work to make a change and this is our new normal.” The students cheered amidst tears for the lives lost.

Afterward she told DailyNorthShore that the school was very uncooperative in planning the walkout.

“We had to rise up and we as students had to make this decision,” she said.

McGregor explained that during the planning stages, she and Banda Frey asked both the administrators and the students questions about what they would like to do for the walkout.

“Everyone here came out of their own free will, which is really amazing,” she said.

Banda Frey said she was nervous that people weren’t going to show up until this morning when she brought 30 posters that sold out within the first half hour. Banda Frey explained that she and McGregor decided to hold the walkout in a public space “to allow the community to come and stand with us to provide a maximum effect.” This was part of the student-led walk that the two organized and there was also a faculty-led walk.

Banda Frey described some of the most interesting signs that students carried: “One poster had paint with blood splotches on it saying: ‘This Is Enough’, which was really powerful, another had all of the names of the shooting victims, and another important message said ‘Grades Up Guns Down.’”

Prior to March 14 McGregor and Banda Frey expressed their views about the Parkland shooting to DailyNorthShore.

DNS: Why did you both decide to coordinate the walkout?

McGregor: We both were extremely affected by the tragedy of February 14th and realized there wasn’t anything being planned at the moment, so we decided to step up.

Banda Frey: I spent days crying, wishing that there was something we could do, infuriated by the fact that we, Generation Z, were fighting so hard to make a change, but those in power were attempting to ridicule and discredit us simply because of our age. We’ve tried to make sure that the feelings of the Highland Park student body are represented accurately, and have been attempting to work with HPHS staff in order to keep them in the loop.

DNS: Florida Governor Rick Scott signed a gun safety bill adding more restrictions to gun laws which includes allowing teachers to be armed if they want to, raising the minimum age to buy a rifle from 18 to 21 and outlawing bump stock. What would you like to see enacted for Illinois?

McGregor: I strongly disagree with arming teachers, however, I do approve of changing the minimum age to own a gun. I would also love to see stricter background checks on individuals interested in purchasing a firearm and regulation of private gun sales in Illinois.

Banda Frey: In no situation would it be appropriate for a teacher to draw a weapon in a school zone. If the idea is to be more protected, then they should hire more security officers with extensive training in how to handle lockdown procedures and armed shooters. A great solution would be to simply not sell assault weapons to the general public.  Furthermore, I believe there should be required classes before purchasing a firearm.

DNS: What do you think about the Parkland student gun control activists?

McGregor: I am inspired and amazed by the students of Parkland, both for rising above the tragedy and for standing up to the NRA. They’re the true heroes of our generation.

Banda Frey: I think that the activists are so inspirational. They are rebounding from this tragedy impeccably saying that they will never stand to allow another shooting like this to happen again. The fact that they are pushing through the hatred, and are ignoring those attempting to call them ‘fake news’ and ‘crisis actors’ and are continuing to fight for gun control and law change is amazing.

DNS: Are any conservative students at HPHS being ostracized for advocating for gun rights?

McGregor: HPHS is definitely more of a liberal school, and the students who are more conservative are usually aware of this. Pro-firearm opinions aren’t usually shared much throughout the school.

Banda Frey: While the conservative students are not fighting for gun rights they are attempting to ridicule the march, and undermine its effects. We are combating comments of ignorance with respect, inviting them to walk with us in solidarity for the lives lost, if not for gun control change.

On March 15, Township High School District 113 submitted the following response to DailyNorthShore, along with this link to school community letters: dist13.org/March14

“Upon learning about the National School Walkout, we have expressed how we would support all students during the event.  Our principals worked closely with our students and student groups to learn of their plans and coordinate a safe environment in which students could demonstrate.  For students who chose not to participate, we ensured meaningful learning occurred in their normally scheduled classes.  We are proud of the maturity all students displayed and believe that whether or not a student chose to participate, they were able to reflect on their own beliefs and take action in the way they found most meaningful and appropriate.”

Here are some photos of the event: 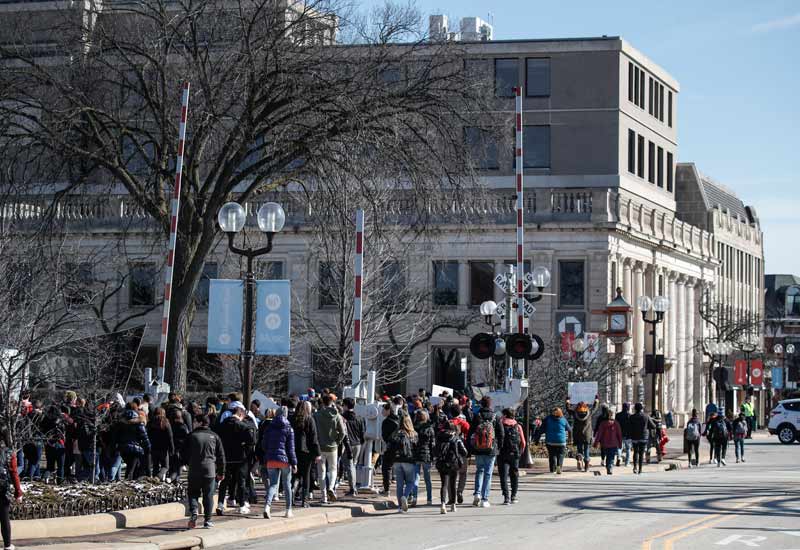 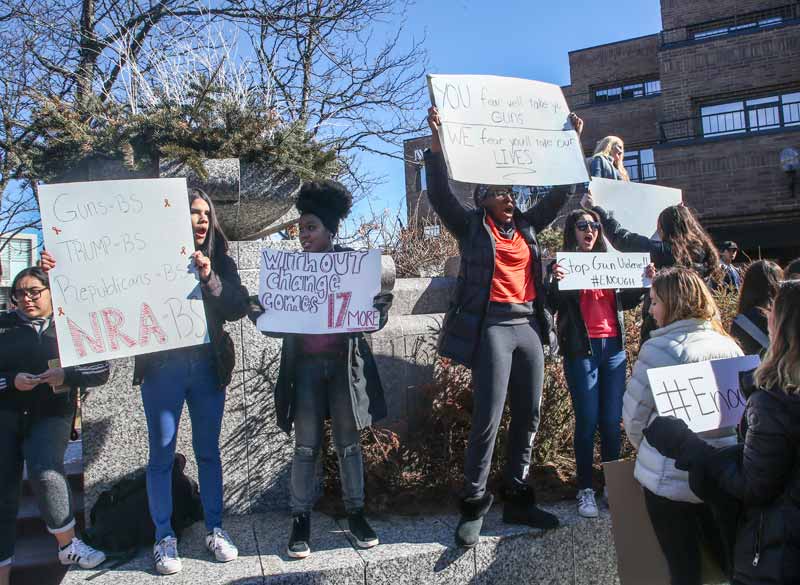 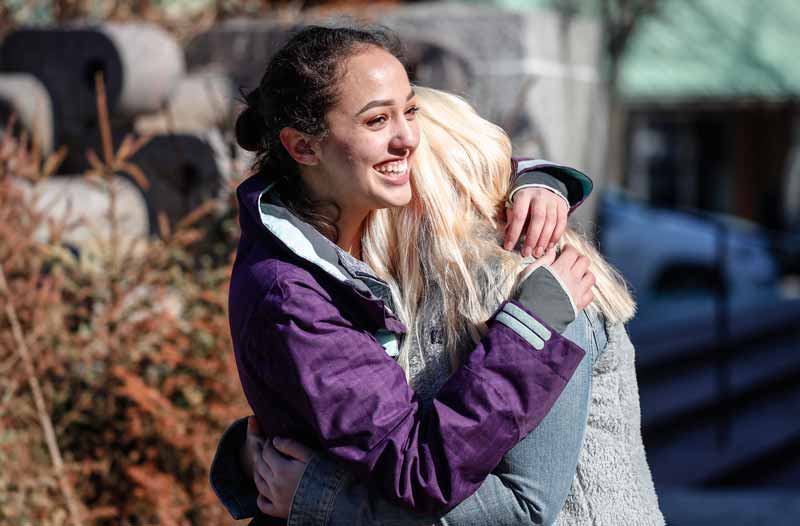 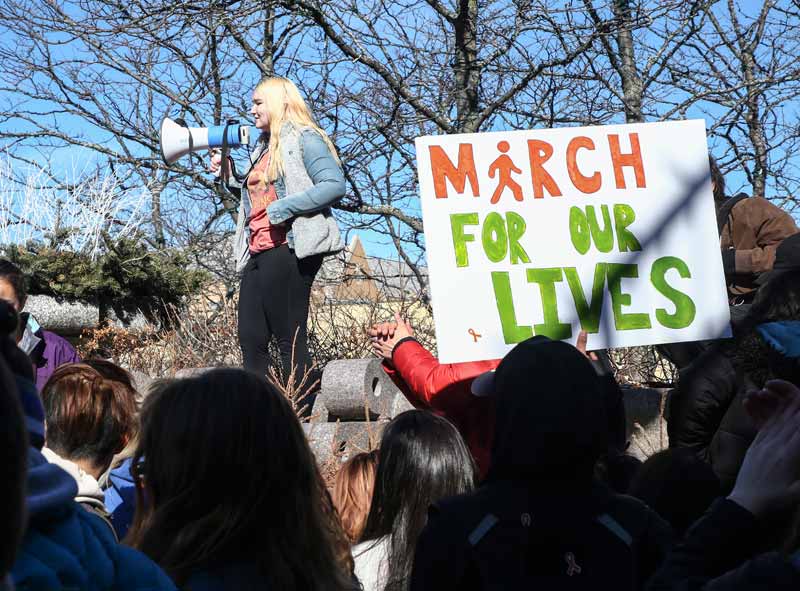 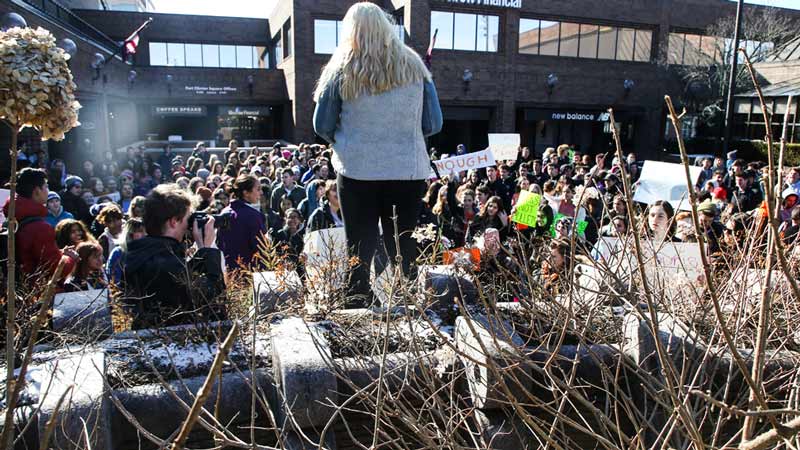 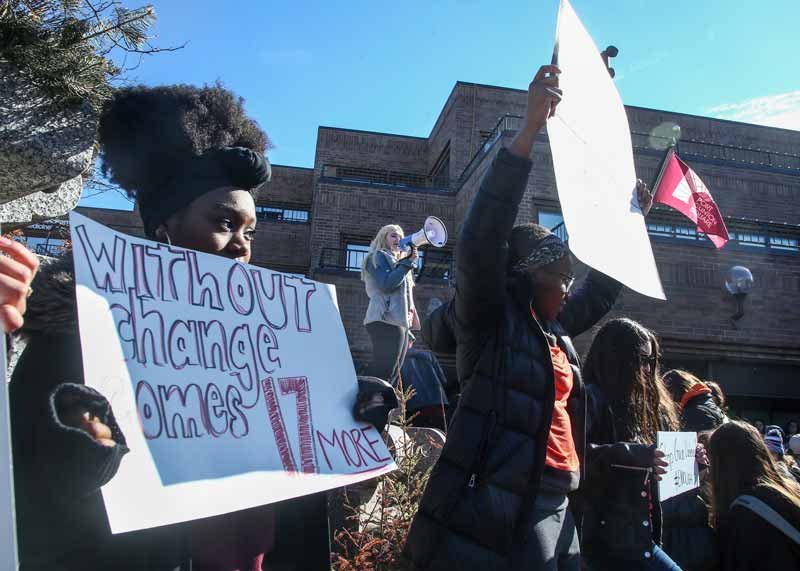 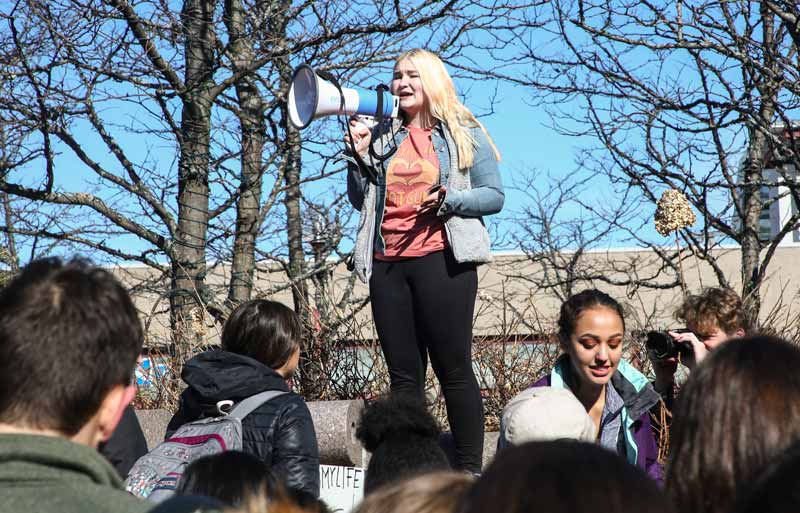 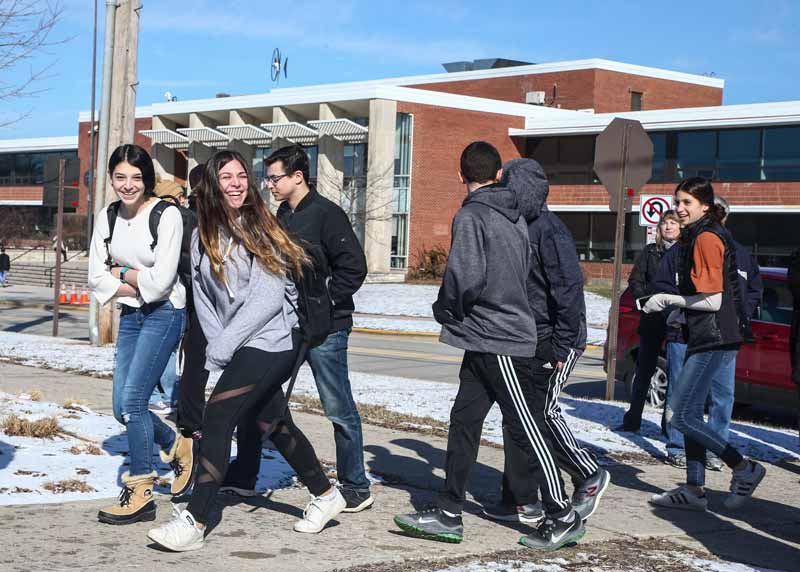 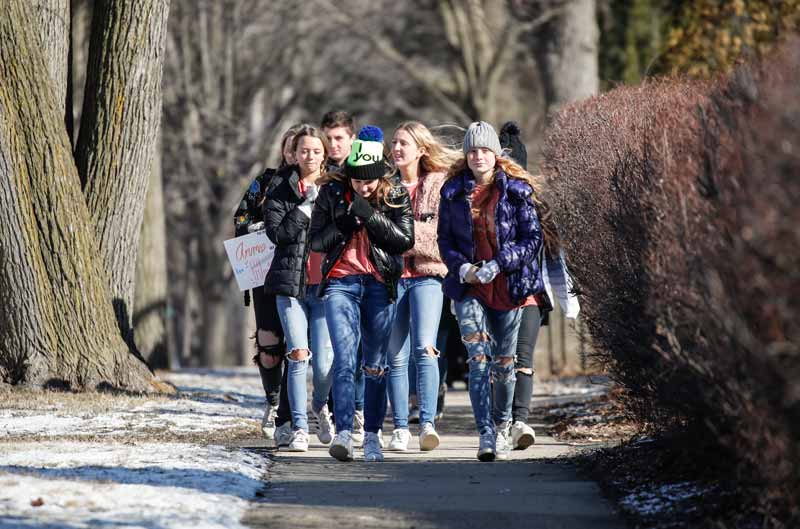 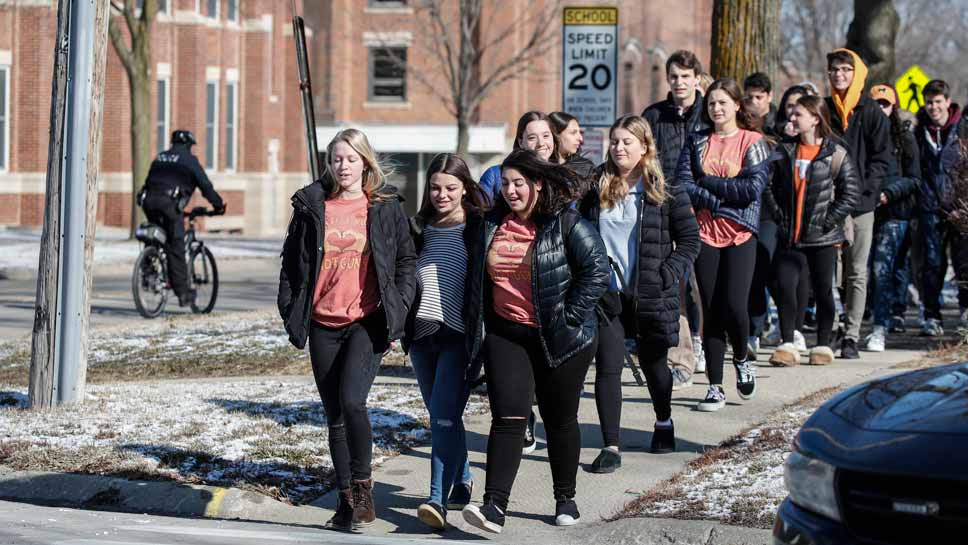