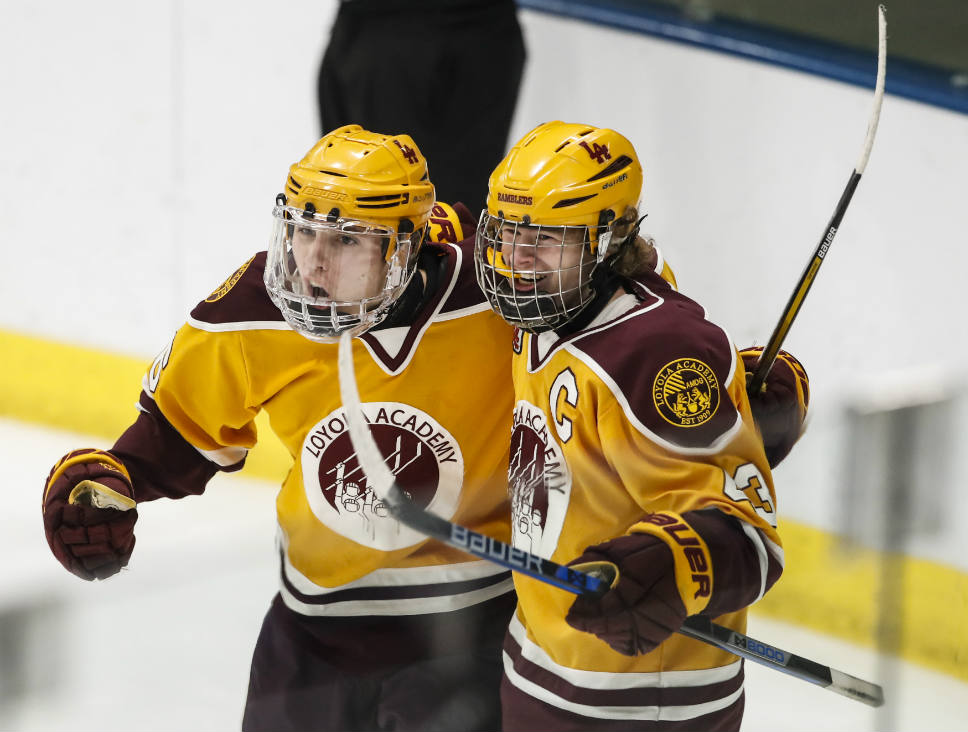 “I got the belt,” the likable, appreciative LaVarre said. “I don’t know what I did.”

The belt normally goes to LA’s player of the game. LA Gold senior forward and AHAI all-stater John Purcell had earned the distinction after Gold’s 5-1 defeat of St. Ignatius in a state quarterfinal on March 6 and presented it to LaVarre in the locker room.

“Coach deserved it,” Gold forward Brock Huber said. “He continues to lead us, continues to say the right things during games.”

Rabid fans of LaVarre’s club get to fasten their seatbelts for a trip to United Center on March 24, when top-seeded Gold (18-6-2) faces No. 3 Stevenson for the state championship. LA Gold last played for the title in 2010, falling to St. Rita.

“What a great accomplishment by our boys,” LaVarre said. “That experience at the United Center … you want your players to experience that; every coach does. The Blackhawks organization does a super job putting on the event. It’ll be the experience of a lifetime for every player.

“I have to give a lot of credit to [first-year co-coach] Blake [Sorensen, from Toronto]. Before our first game, way back on August 24, he said our goal is to win a state championship. And look where we are now tonight, a team with a chance to do just that in 12 days.”

Huber (assist) and senior forward Daniel Stevens (goal) — a pair of AHAI all-staters — connected for the first goal of the game with 6:32 remaining in the first period. Fourth-seeded Glenbrook North tied it in the fourth minute of the second period.

The third goal of the game, the clincher, scored late — really late — in the second period?

They’ll be talking about it for decades.

Stevens slid a slick lead pass to a rushing Huber, who, fully aware that time was of the essence, shot the puck quickly. The puck beat all-state goaltender Tyler Laarveld (36 saves).

“Great look by Daniel,” Huber would say later. “He was patient. Gave [the puck] to me at a great spot.”

But there was uncertainty as the teams left the ice.

The question on everybody’s mind: Did the buzzer sound before the goal?

The goal was confirmed.

“About a tick left,” LaVarre said of the time left in the period when he figured the puck crossed the goal line. “We play to the horn; we don’t stop.”

LA Gold senior goaltender Brady Hugh stopped 14 shots and enjoyed plenty of help from his gritty defensemen. Declan Darcy used his combination of speed and toughness; junior all-stater Timothy Hackett came up big; and forward Robert Gapp smothered a sizzling shot while falling to the ice with 7:18 left in the final period.

“It’s been a dream of mine, to play for my team at the United Center,” said Huber, whose brother John Huber helped New Trier Green win the last two state championships. “Stevenson is a solid team. It’s a team that can move the puck well and outwork teams.

“We’re looking forward to the game.”

Notable: LA Gold junior Aidan Finegan and senior defenseman Matthew Parma also made the AHAI all-state team. … LA Gold went 16-0 in Scholastic League play this winter. … LA Gold defeated Sandburg 6-0 and Carmel Catholic 4-0 in its first two AHAI Red Varsity division playoff games. Entering the state championship game against Stevenson on March 24, Gold has outscored its four playoff foes by a combined 17-2. … DJ LaVarre has been either the head coach or a co-coach of LA Gold since 1993. LA Gold finished state runner-up in back-to-back seasons (2008-09, 2009-10) and won its last state title in 1996 with a defeat of New Trier Green. 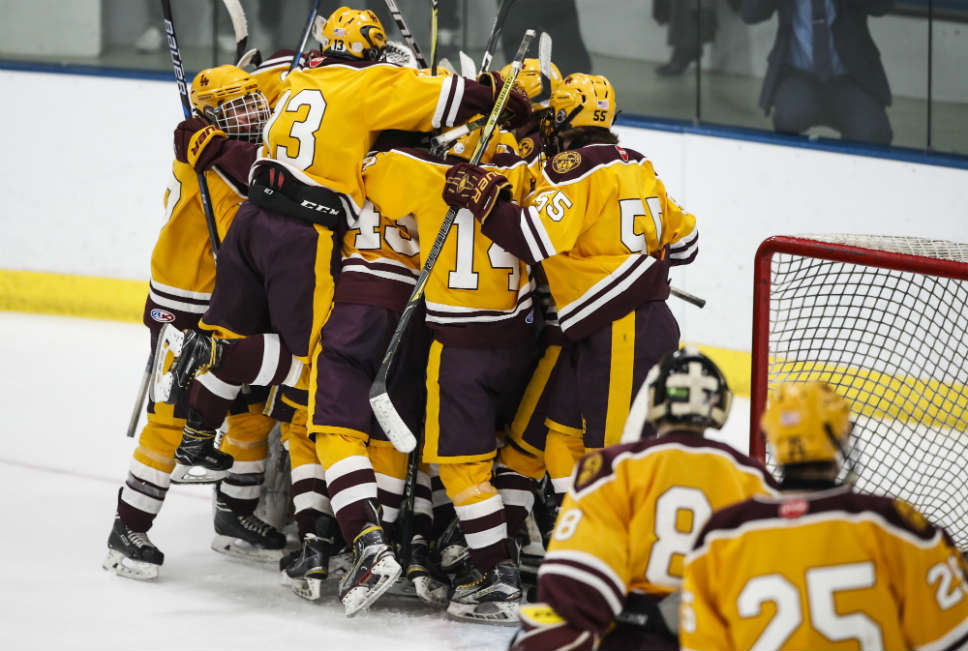 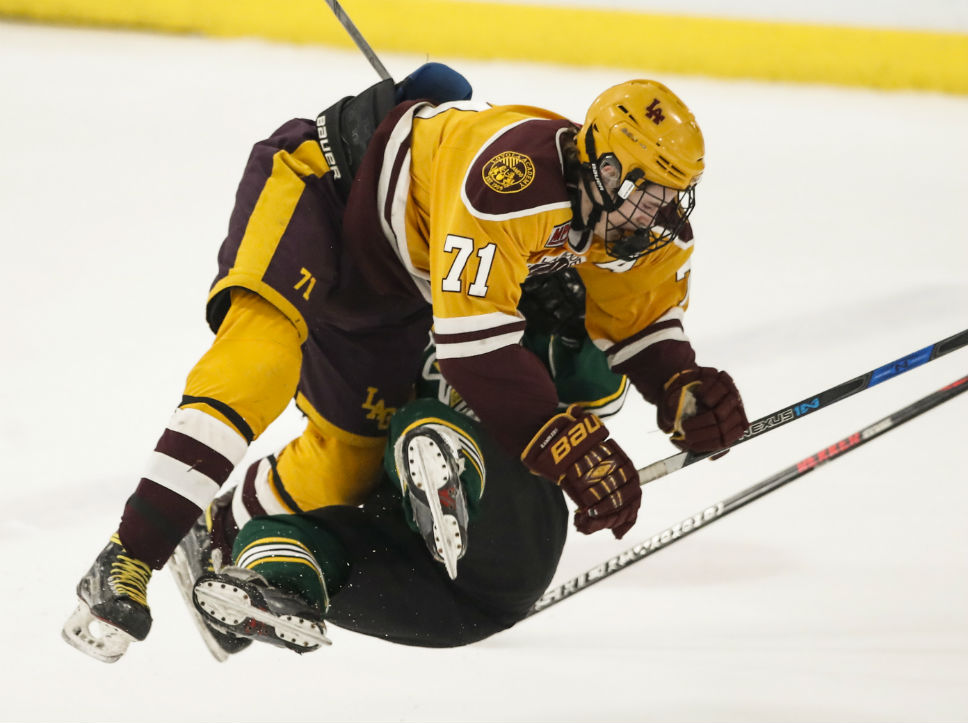 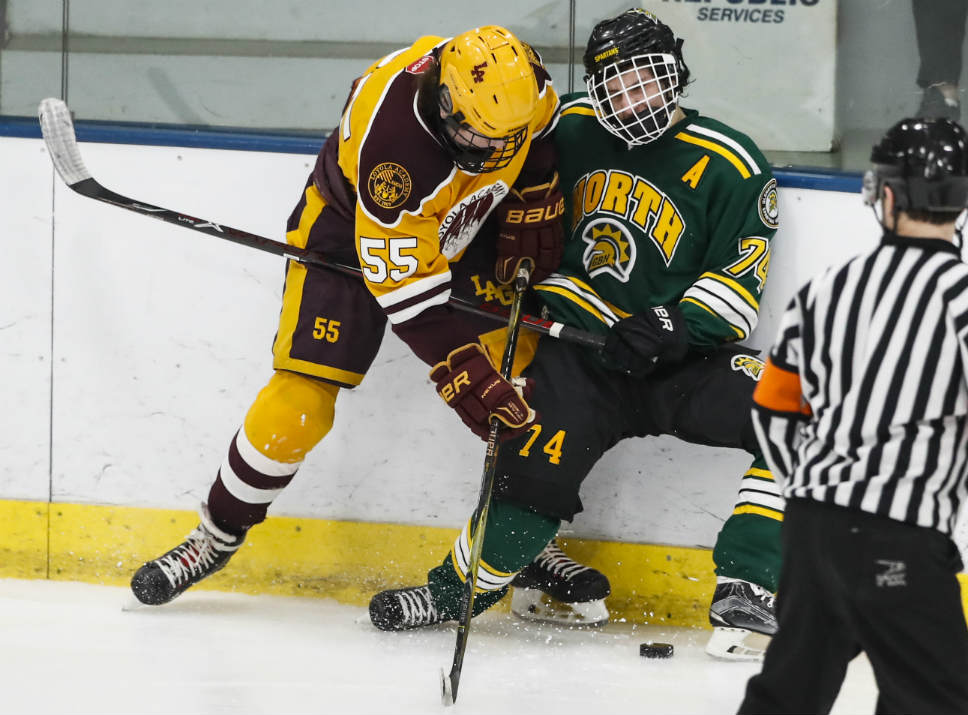 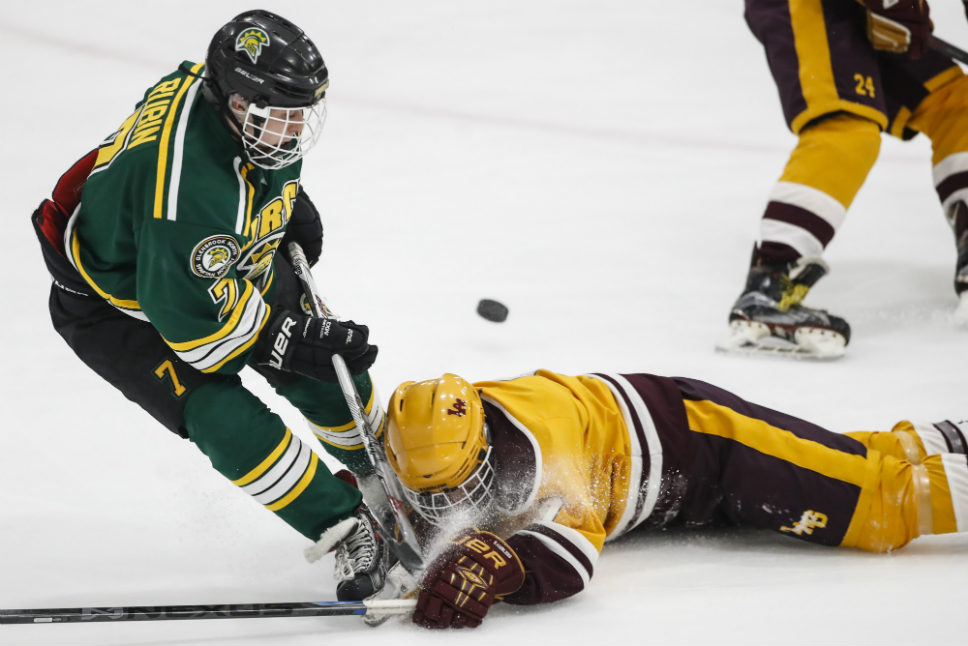 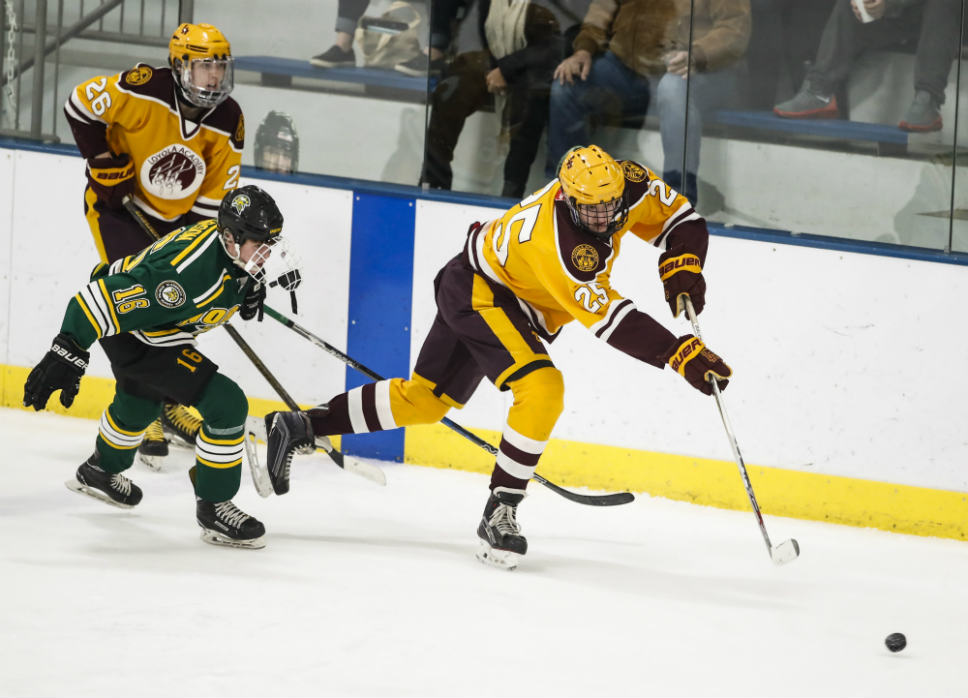 Robert Gapp of the Ramblers tracks the puck. PHOTOGRAPHY BY JOEL LERNER 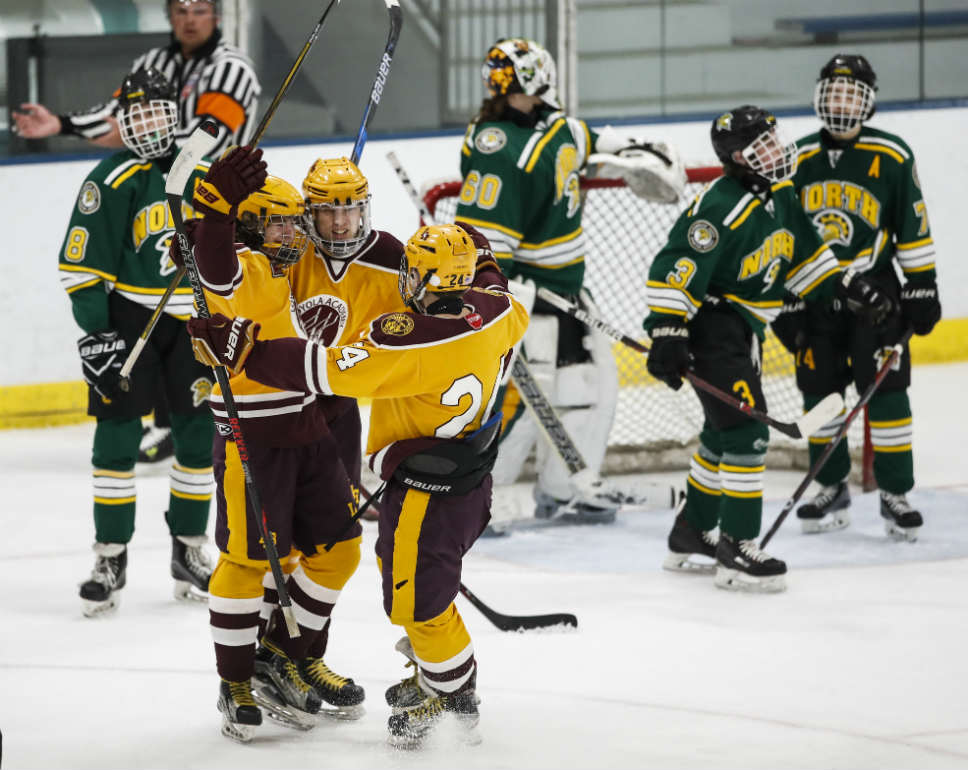 Brock Huber, Danny Stevens and Nicholas Liebers react after LA Gold scores the first goal of the game. Stevens got the goal. Huber got the assist. PHOTOGRAPHY BY JOEL LERNER 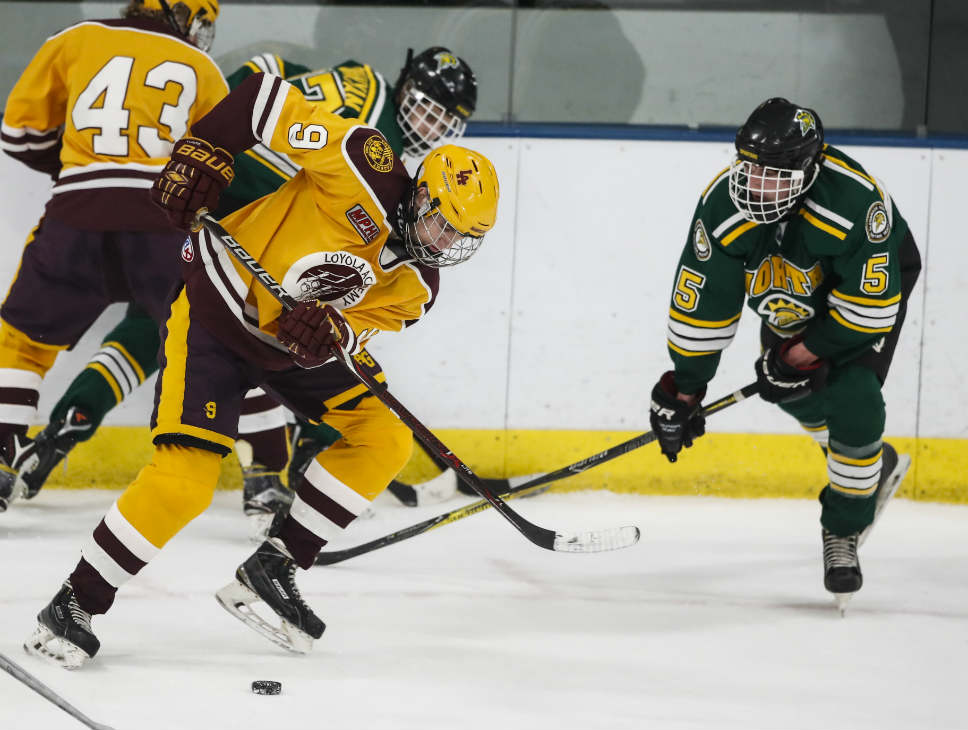 Jake Gonzalez (No. 9) of LA Gold eyes the puck. PHOTOGRAPHY BY JOEL LERNER 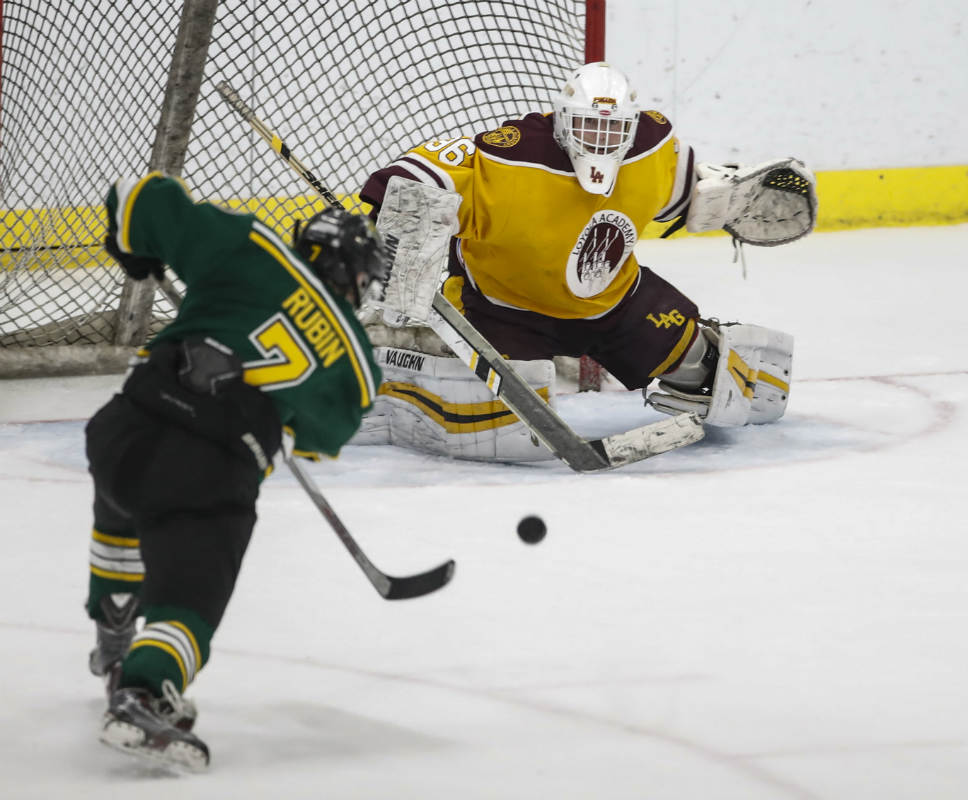 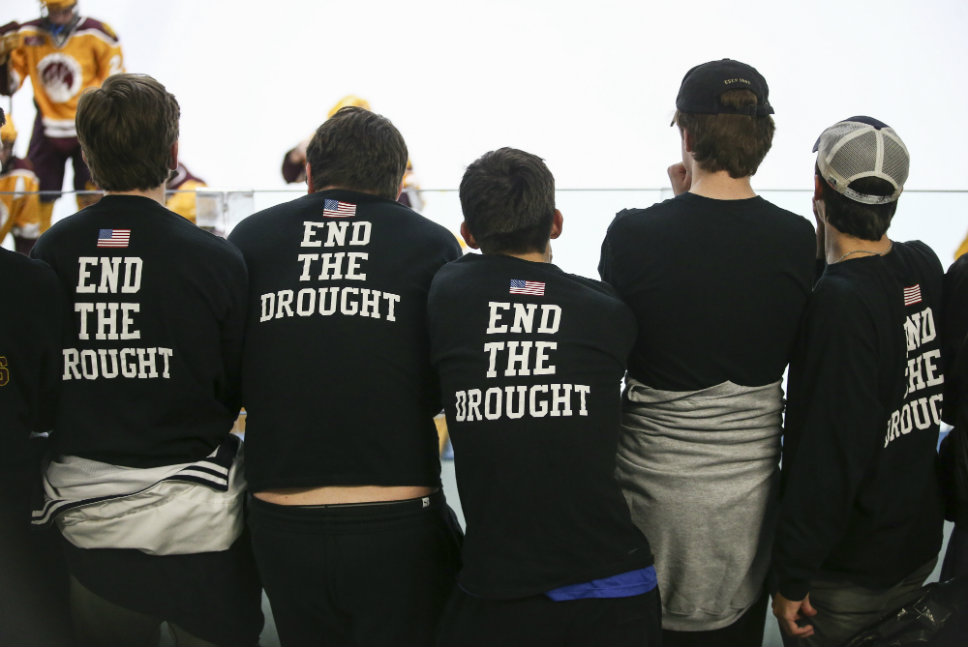