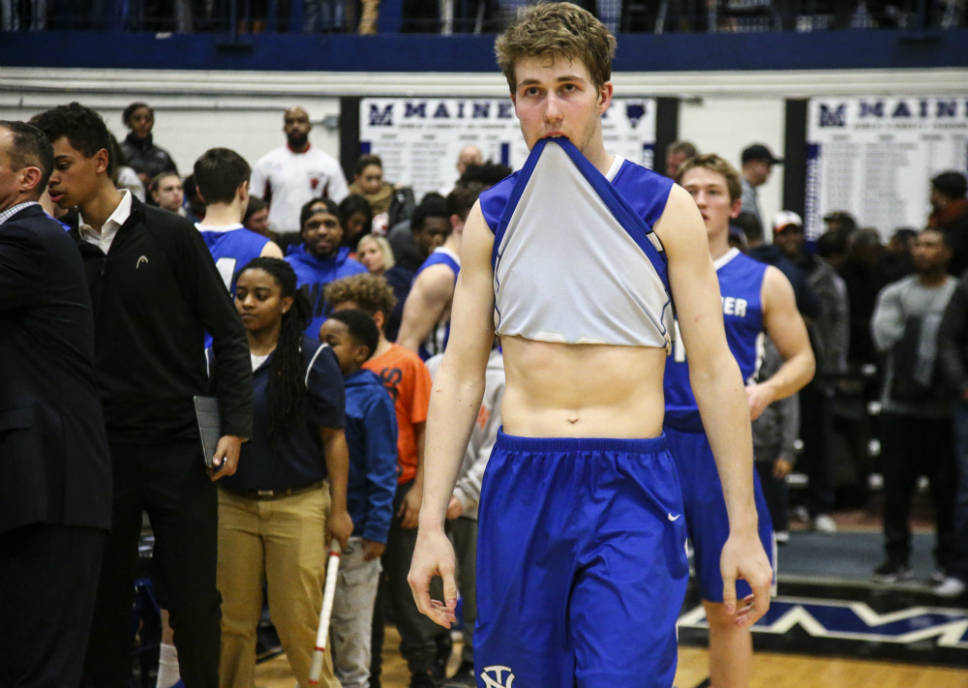 Thirty minutes after playing their final boys basketball game of the season Friday night, New Trier’s hoopsters and Trevians coach Scott Fricke climbed a couple flights of stairs and got showered — with rounds of applause.

Players’ parents and other fans had gathered to greet them warmly following NT’s 69-57 loss to Evanston in the Class 4A Maine East Sectional final on March 9.

“When I look back and think about this team, I’m going to remember how tough it was, how rugged it played,” Fricke said of his 25-6 club, which had advanced to the championship game with a 79-72 double-overtime defeat of Niles North on March 7. “The guys did not accept losing.”

Evanston fell behind 4-0 in the first minute but scored the next 11 points, with the first nine coming via a trio of three-pointers. The first-seeded Wildkits (25-5) would end up connecting on eight treys in the half and led 33-20 at the break — the identical score (with Niles North’s Vikings up) in second-seeded NT’s sectional semifinal in Park Ridge.

“No lead is safe against New Trier,” Wildkits coach Mike Ellis said three days after defeating Loyola Academy in the sectional’s first semifinal. “We learned a lesson from watching the tape [of the NT-Niles North sectional semifinal].

“Taking care of the basketball [was key],” the coach added. “We didn’t try to go too fast or too slow. When things started to turn a little, we did a good job of stemming the tide.”

Evanston held NT scoreless for nearly  four minutes in the fourth quarter but managed only one field goal in that span. The Wildkits used a 7-0 spurt to open a 60-47 advantage and then hit seven free throws in the final 1:29 to secure a Hoffman Estates Supersectional berth against Lake Zurich on March 13.

Junior center Ciaran Brayboy scored all 16 of his points in the first three quarters to pace NT and came down with a team-high 10 rebounds. NT senior guard Andrew Kirkpatrick poured in all 12 of his points in the final three frames and dished three assists; he came up with the steal of the night for his team at the end of the first half, stunning a guard who was too casual while dribbling and racing three-quarters of the court for an uncontested layup.

“It seemed we just couldn’t get anything going, and Evanston played great, taking us out of our rhythm,” Fricke said. “But we were there, right there, down by only five in the fourth quarter.

“I was proud of the way we battled.” 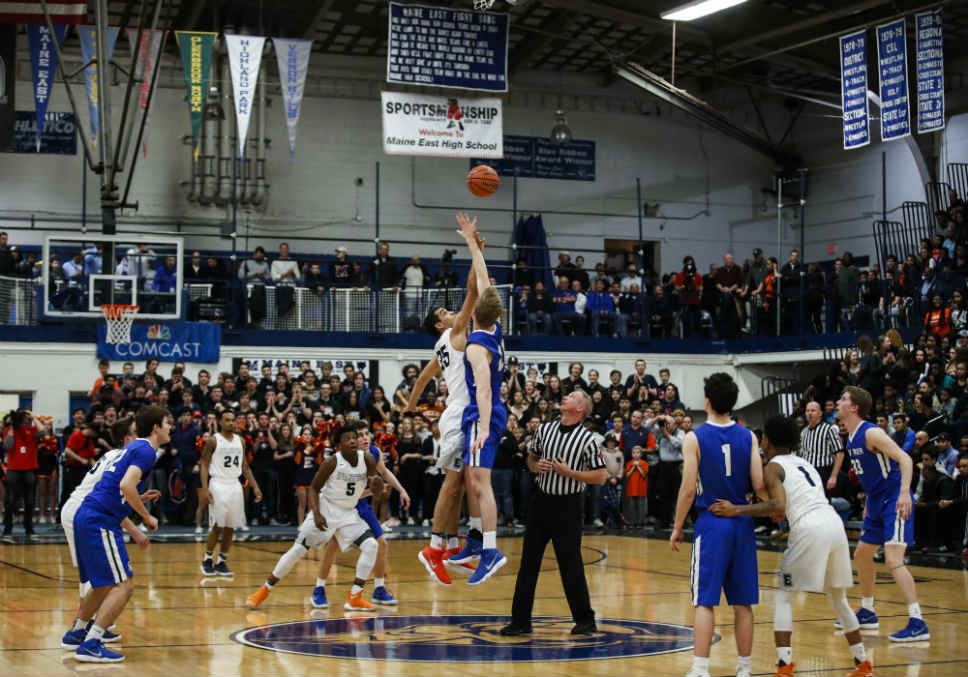 The tip-off: New Trier and Evanston played in front of a sellout crowd at Maine East High School. PHOTOGRAPHY BY JOEL LERNER 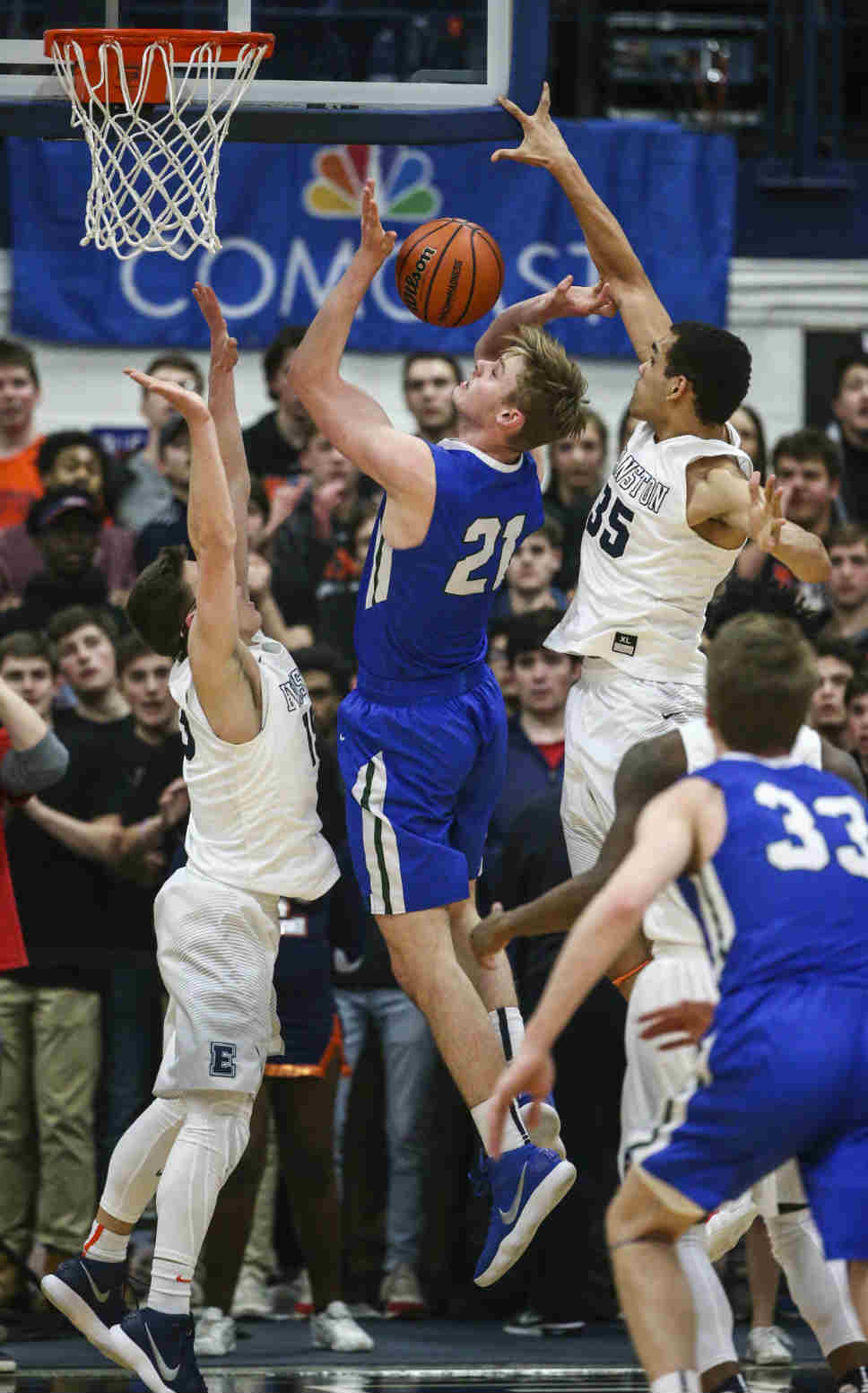 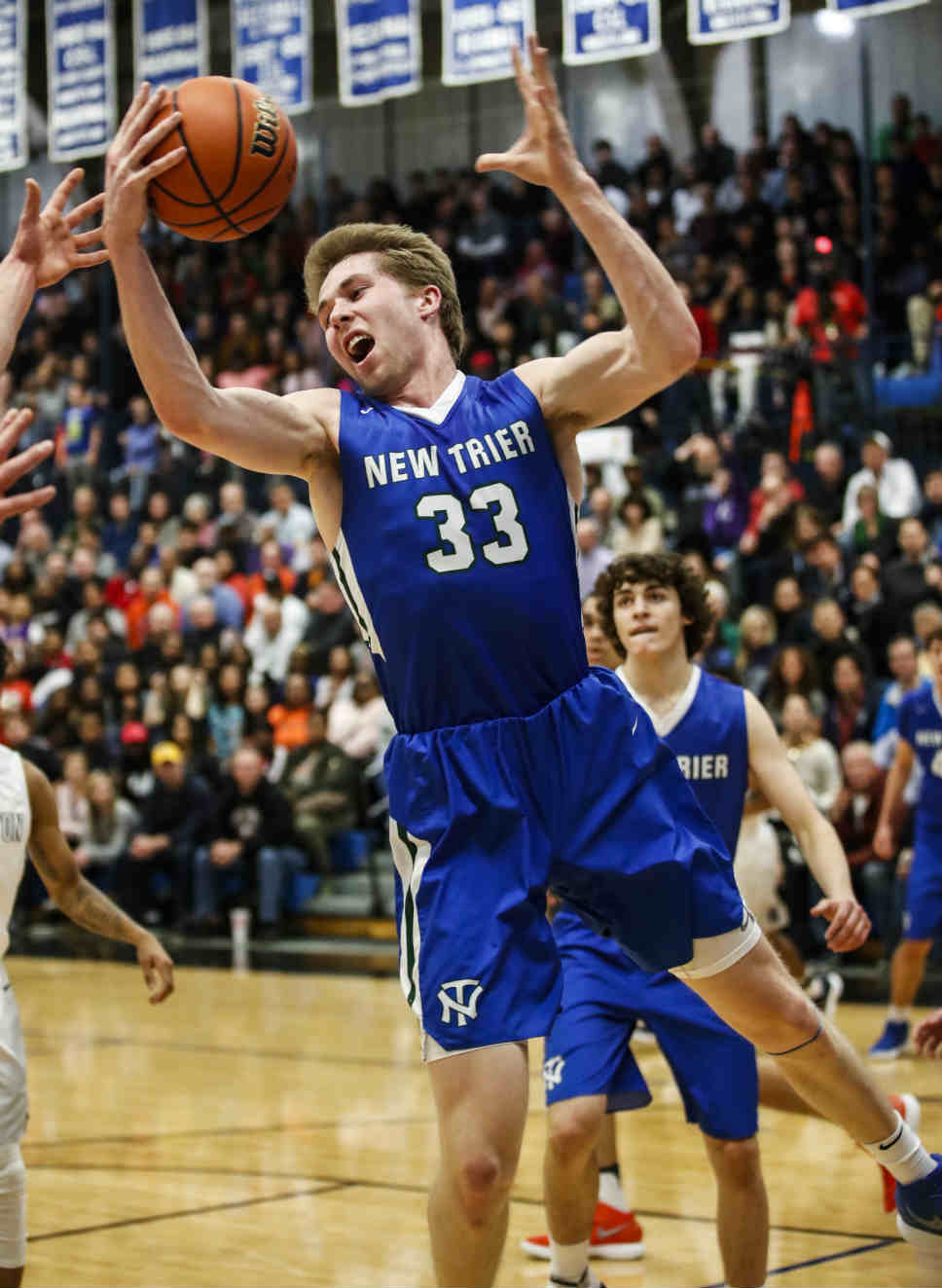 Spencer Boehm of the Trevians snags a rebound. PHOTOGRAPHY BY JOEL LERNER 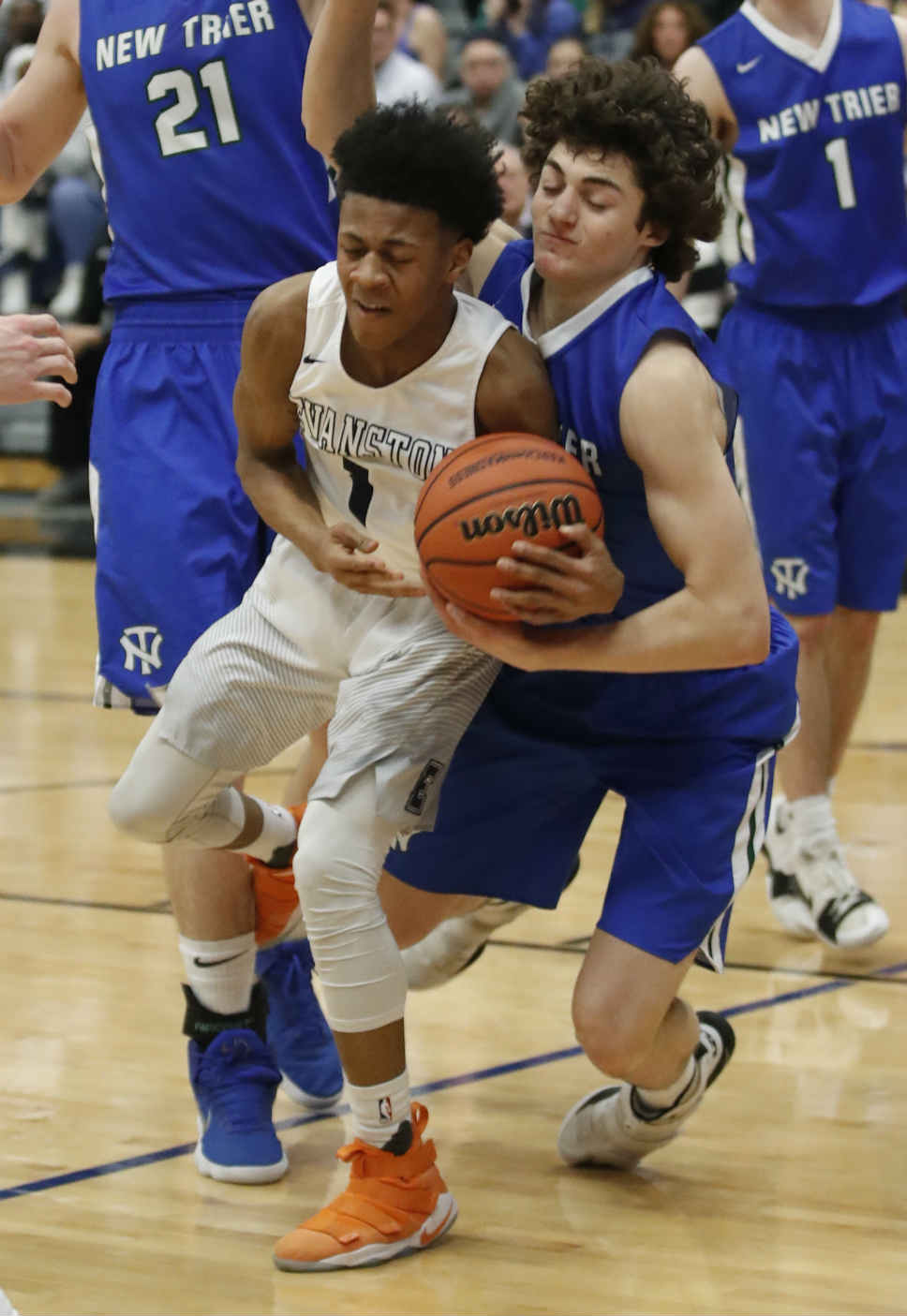 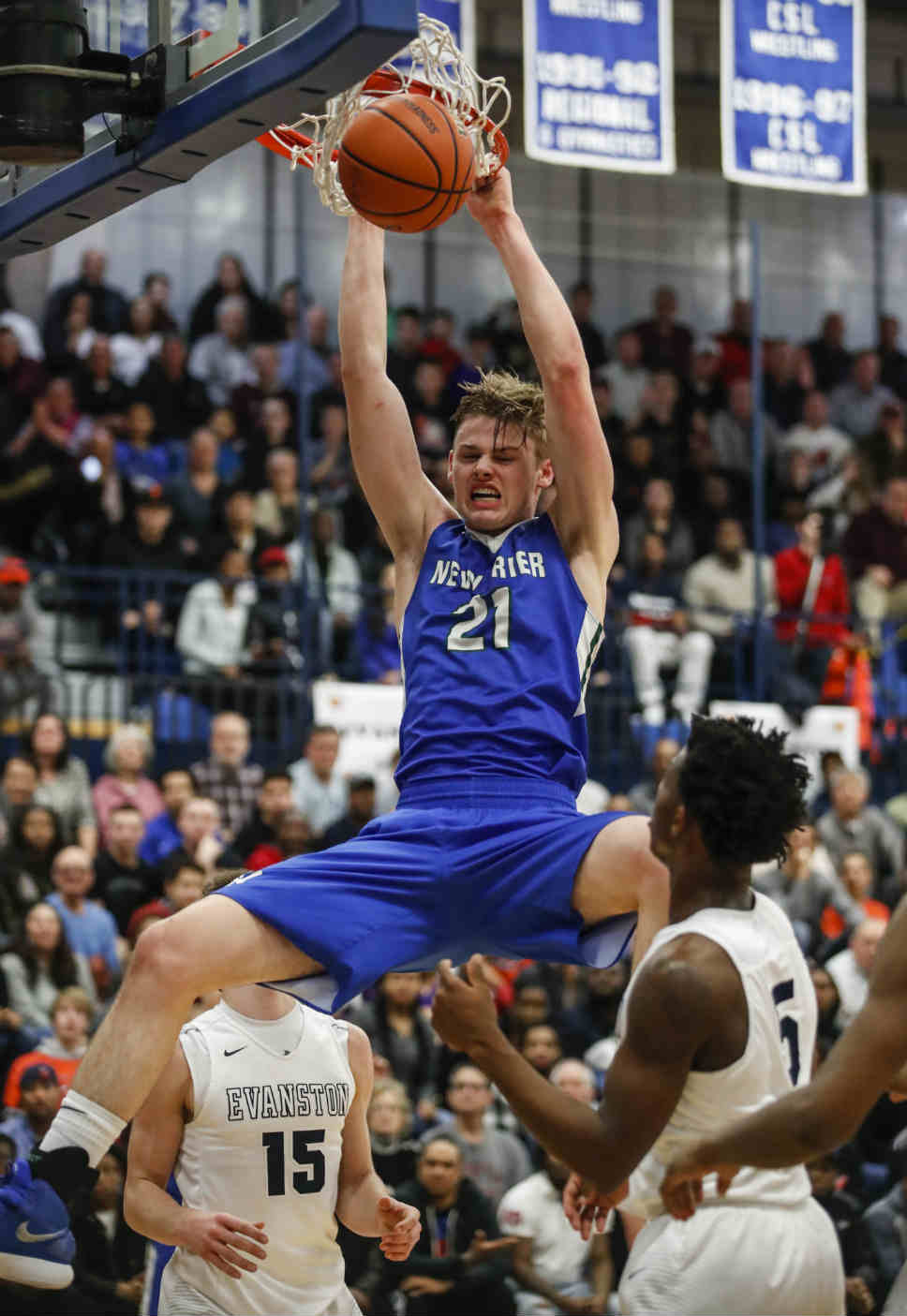 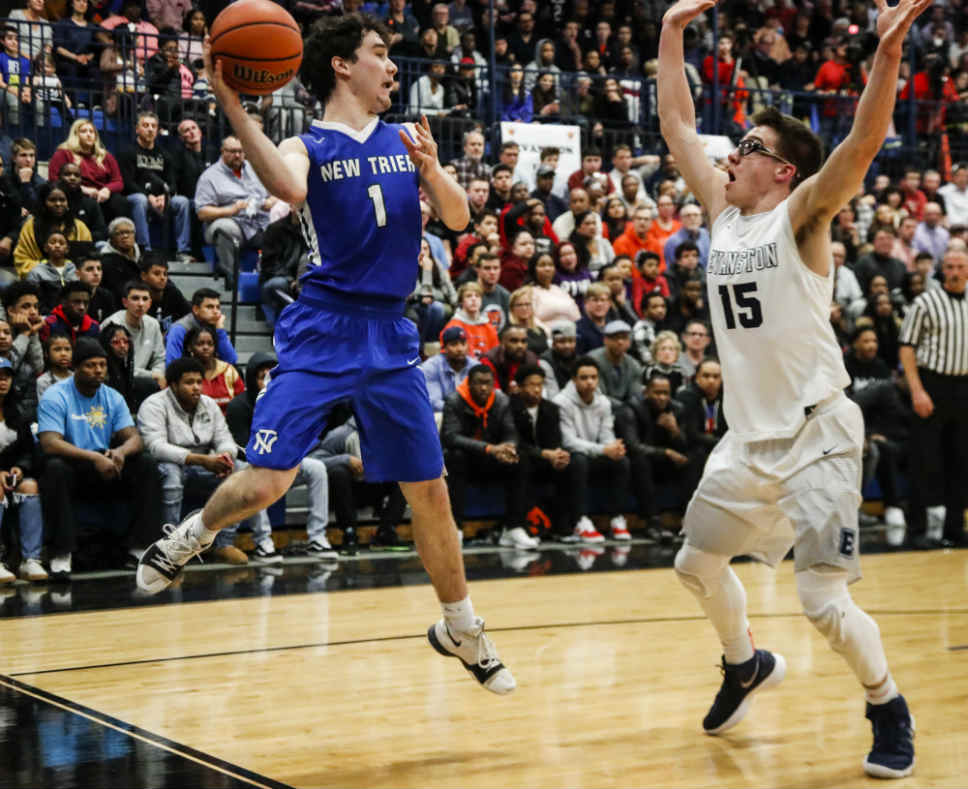 Andrew Kirkpatrick (No. 1) keeps a ball from going out of bounds as Evanston’s Blake Peters defends. PHOTOGRAPHY BY JOEL LERNER 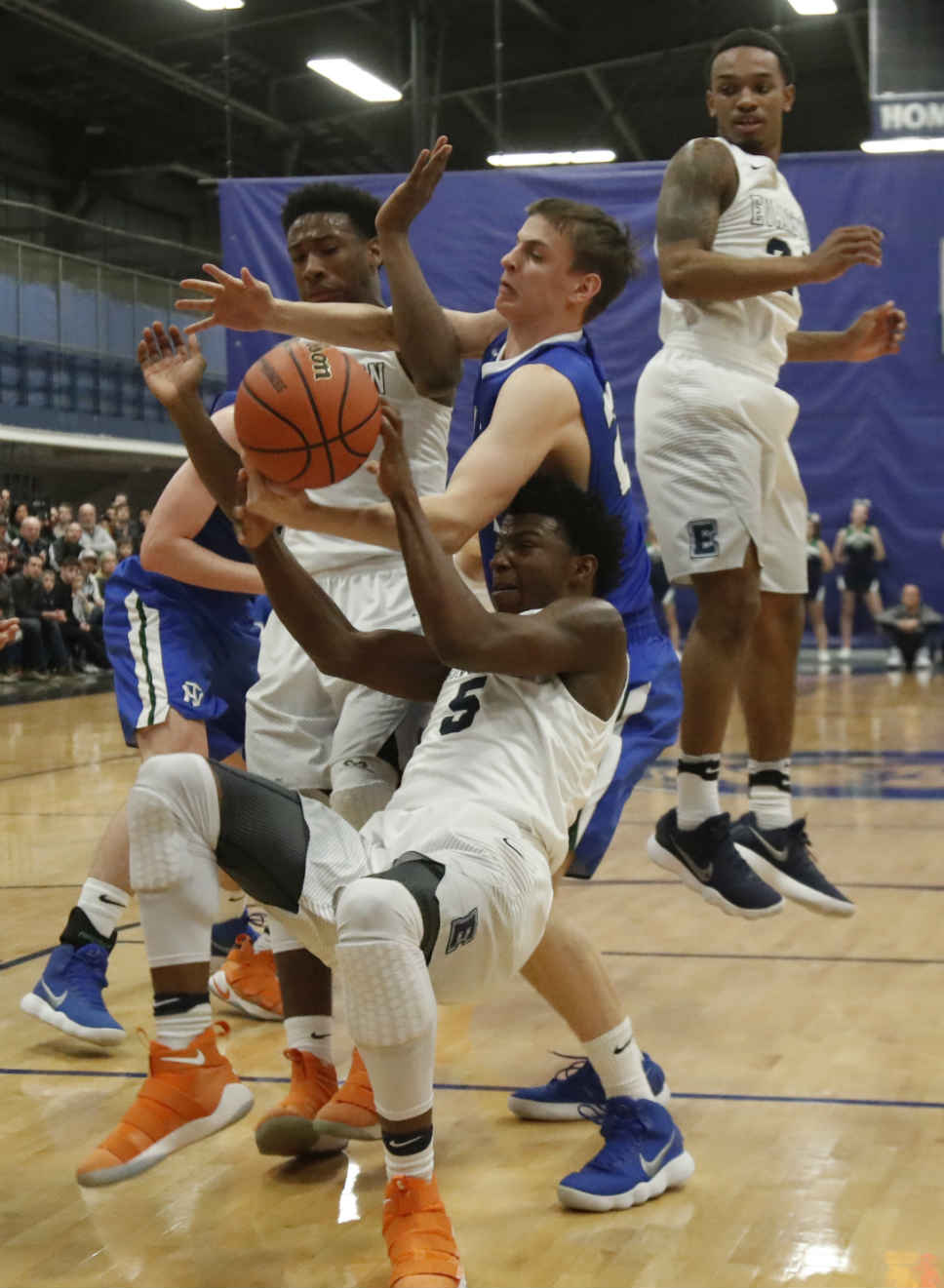 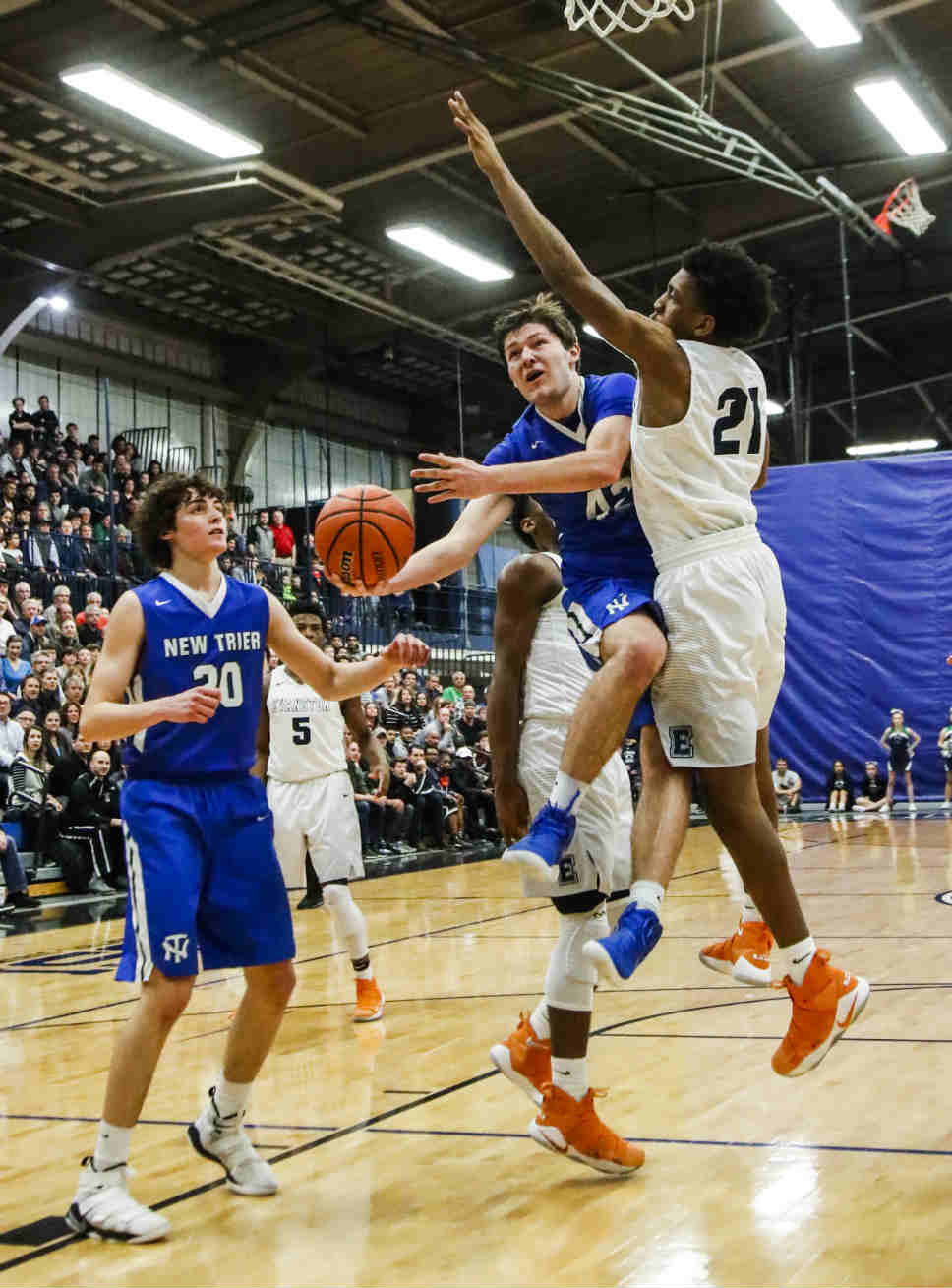 Griff Ryan of the Trevians drives to the bucket against Evanston’s Jalen Christian. PHOTOGRAPHY BY JOEL LERNER 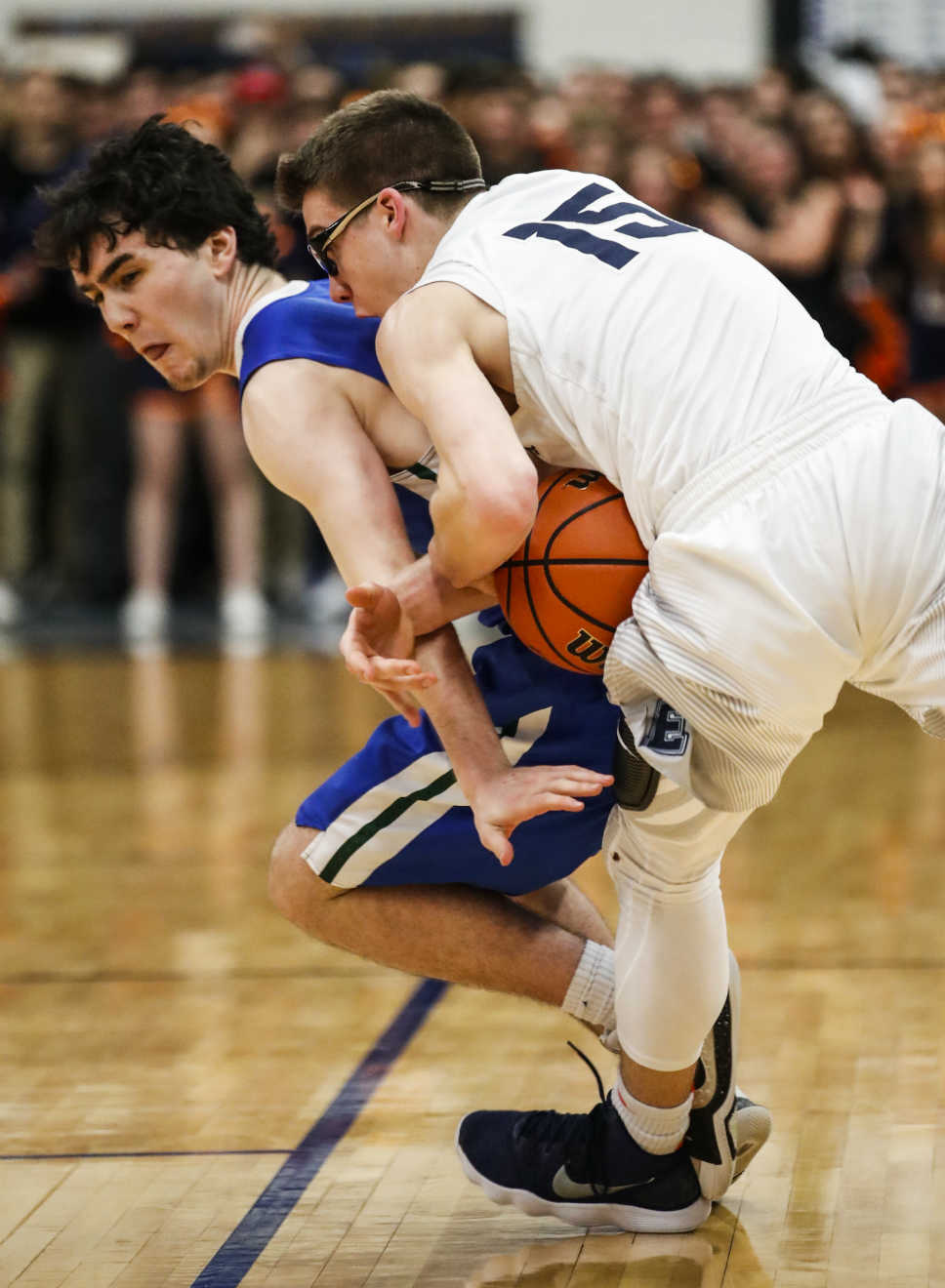 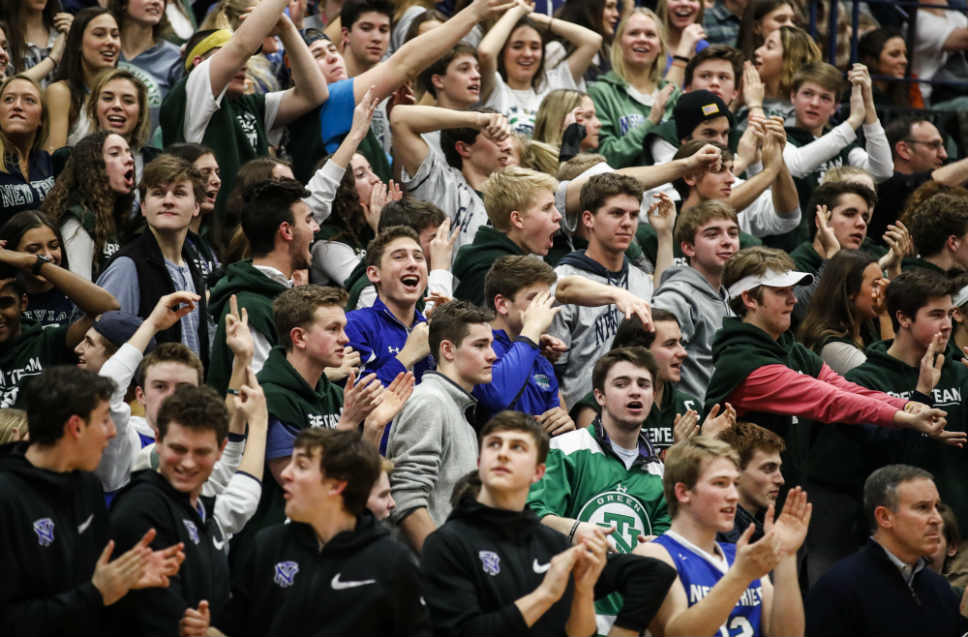 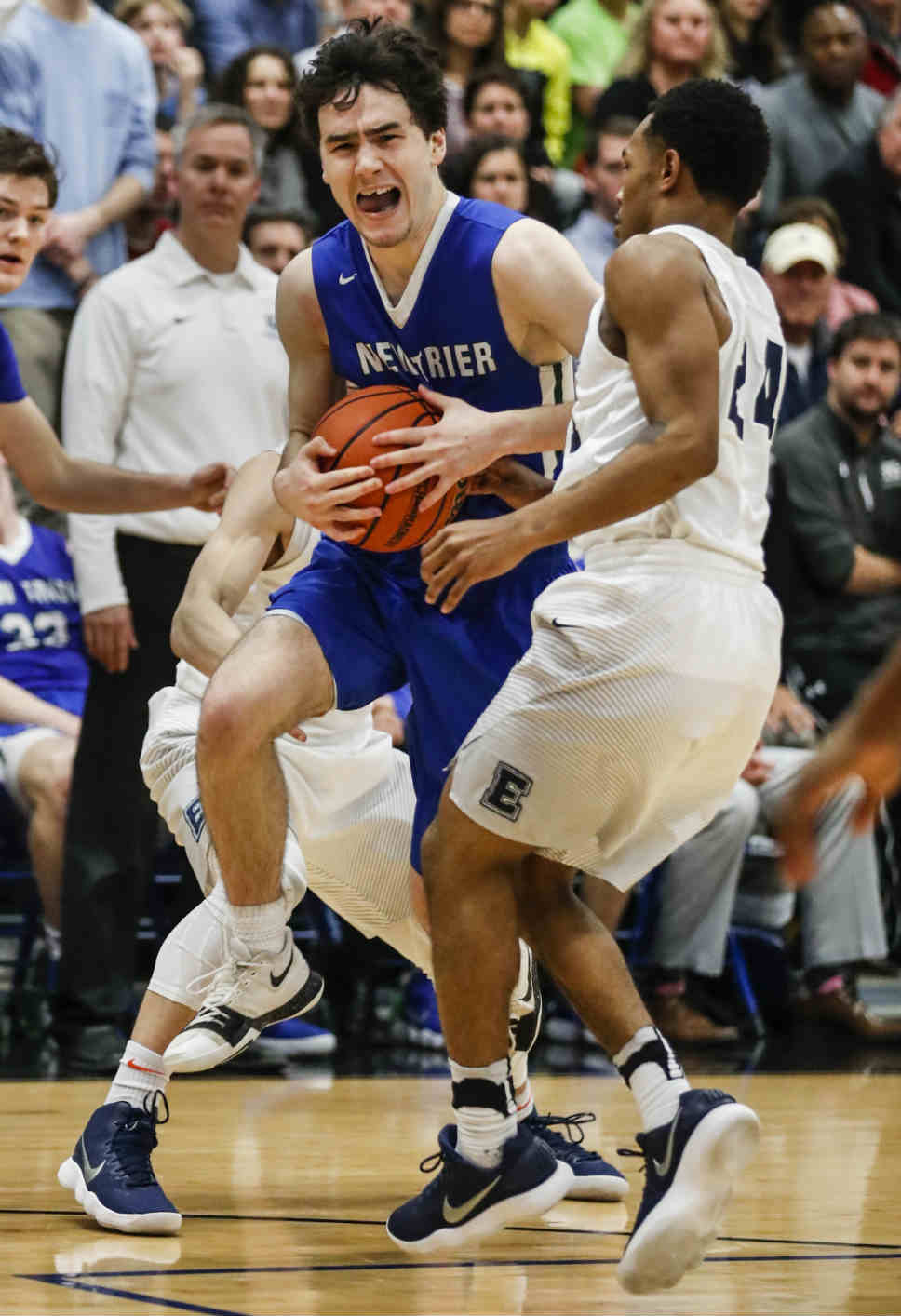 Andrew Kirkpatrick of the Trevians splits the defense while driving to the basket. PHOTOGRAPHY BY JOEL LERNER 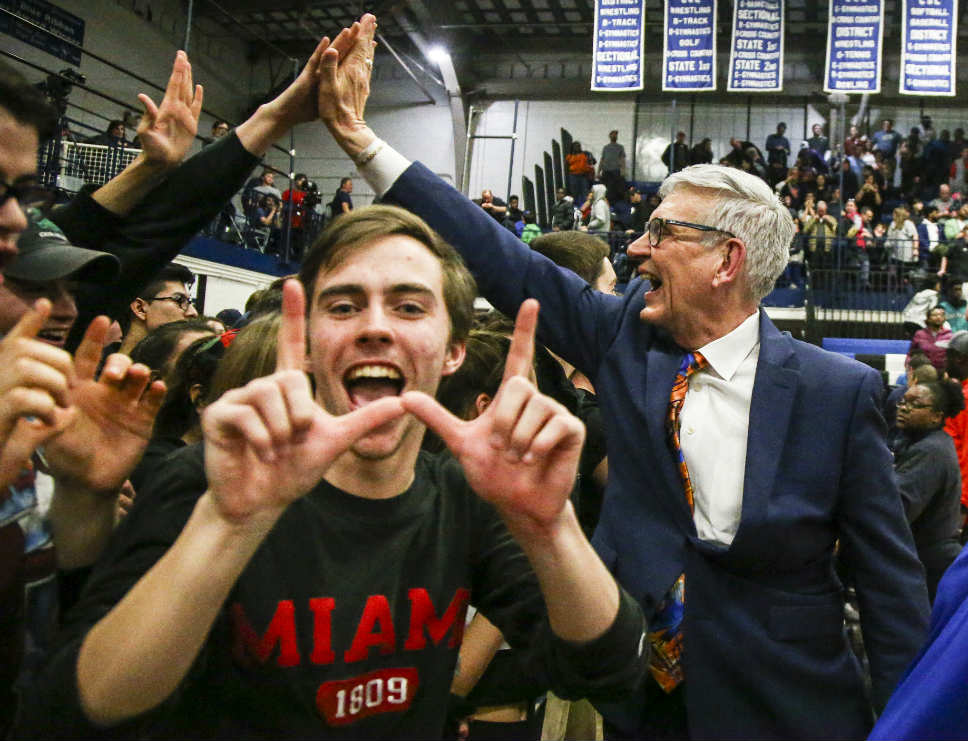 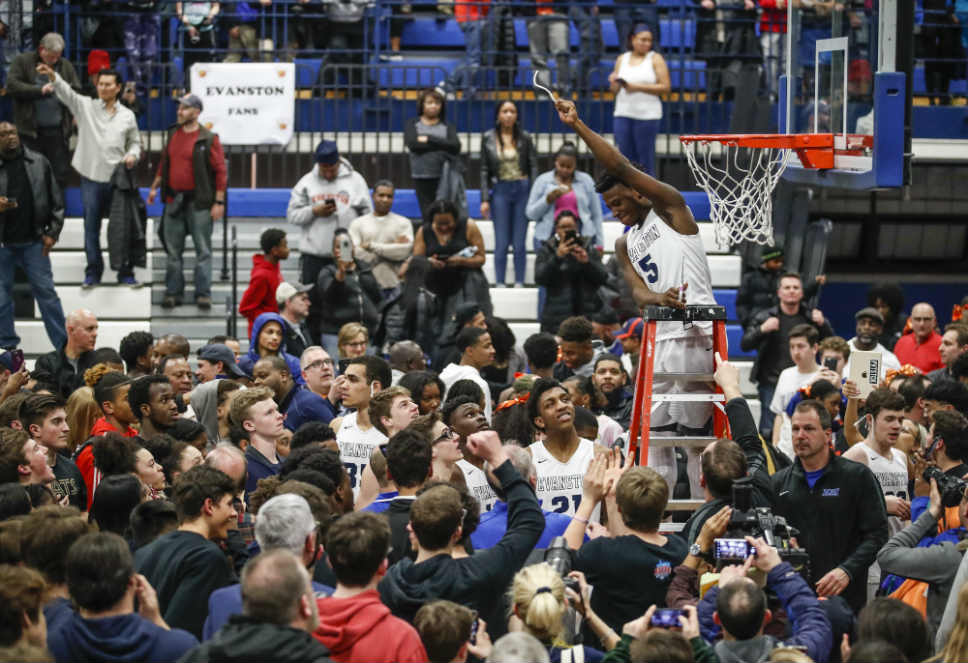 Evanston’s Lance Jones cuts a piece of the net. PHOTOGRAPHY BY JOEL LERNER