LAKE FOREST — A large number of Lake Forest High School students plan to leave the building at 10 a.m. March 14 as part of the National School Walkout.

While most of the teens will stand on the school’s front lawn with arms locked for 17 minutes remembering the 17 people gunned down February 14 at Marjory Stoneman Douglas High School in Parkland, Fla., at least 27 will march to City Hall to vote instead.

The national movement was started by Women’s March Youth EMPOWER in response to the February 14 shooting in Florida. It is an effort to get high school students across the country to walk out of class at 10 a.m. for 17 minutes.

The Lake Forest organizing effort began when LFHS junior Averi Nolan saw some of the Stoneman Douglas survivors on television talking about what happened to their schoolmates and its impact on their lives. She posted a call to action on social media and her schoolmates responded.

Nolan said she was moved by the Stoneman Douglas “students who are hoping to ensure that what happened to their peers doesn’t happen to anyone else ever again.” She also wanted to do as much as she could to depoliticize the event since she recognizes there are varying views in the school community about gun control.

“To walk out would be a chance to take a stand,” Nolan wrote in her post. “We may not all have the same views on gun control laws, but we can all choose to honor the lives of these victims.”

Elizabeth Porter, a senior and another student helping organize the event, said that once the school learned of the keen student interest, the administration set out rules.

Principal Chala Holland said in an email to the school community attendance will be taken at 9 a.m. when second period begins. Teachers will take it again at 10:45 a.m. during fourth period. Students who are gone at other times will have an unexcused absence.

Porter said students walking out will be on the front lawn locking arms in a show of solidarity. Those who elect not to participate will spend the time in the commons or the cafeteria.

At least 27 of the students walking out will be risking the consequences of an unexcused absence. Aiden Kinsella, a senior, said those students are committed to the action he is organizing to go to Lake Forest City Hall and vote that morning. He hopes the number will grow.

“We are taking real tangible action toward improving our world for the better,” said Kinsella. “Instead of just showing that we’re upset with gun violence, we are actively doing something about it by doing our duty as citizens and voting for people we believe will do what they can to make our country a better and safer place.”

Kinsella said he expects some of the time he is out of school he will be marked for an unexcused absence. He said the consequences are a price to pay for making the world a better place by voting. It will be his first time.

Though Porter said she has not decided if she is going to vote March 14 or remain on the front lawn, she said she will be casting her first vote in the March 20 primary. She looks forward to making choices fitting her values.

“Columbine Should Have Been the End of School Shootings”

Porter also said she recognizes she and her schoolmates were not alive when 12 students were gunned down at Columbine High School near Denver in 1999. She said she wants her peers to make a difference unlike others before them.

“Columbine should have been the end of school shootings but it was just the beginning,” said Porter.

When Lake Forest junior Kate Stephenson learned in late February about the walkout she said she immediately wanted to participate. She will be on the front lawn of the high school locking arms with her schoolmates but she has not been silent. She wrote a song that she performed at the LFHS Talent Show in February and posted on YouTube (the video is at the top of this story). The video was seen by more than 2,700 people as of 7:30 p.m. March 6.

Stephenson said she was in Nashville visiting Belmont University during a weekend last month. While sitting in the airport waiting for her plane home, she was watching television hearing about the Stoneman Douglas shooting. The song came to her. 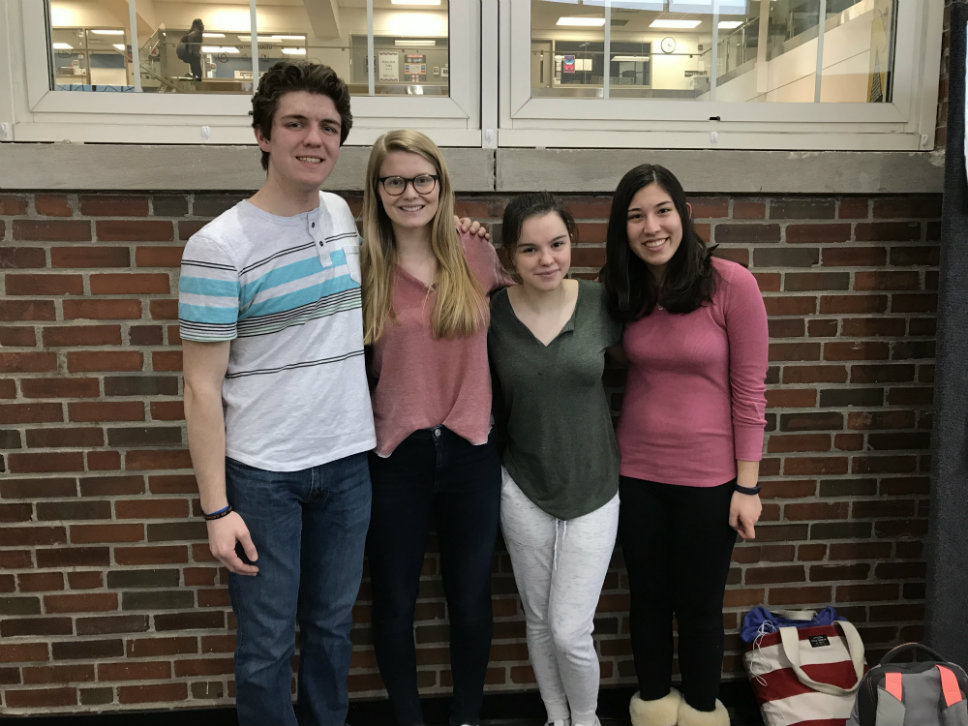