WINNETKA – Students in Jennifer Pfannerstill’s two Biology 10 classes at North Shore Country Day School have spent the past four weeks building an organism in the Science Center Atrium. Every few days, they posted a hint on the science department’s Instagram account. It’s critically endangered, lives in the water, has a tail. Then they released some cultural clues: papel picado (a decorative craft made of cut paper), some colorful buildings, more trash.

Every few days, they would post a hint on the science department’s Instagram account. It’s critically endangered, lives in the water, has a tail. Then they released some cultural clues: papel picado (a decorative craft made of cut paper), some colorful buildings, more trash.

After researching a handful of animals, including starfish, sea turtles, anglerfish and even a lion, students chose the axolotl, a small amphibian native to Lake Xochimilco in Mexico City that may hold clues to major advances in stem cell research and even a cure to cancer.

Also known as a Mexican salamander, axolotls are usually between six and 12 inches long and come in a variety of colors and patterns, including tan with gold speckles, gray, white and pale pink. They have wide faces with lidless eyes, short limbs and long digits, and they are one of few amphibians that reach adulthood without going through metamorphosis. They have gills and underdeveloped lungs, and spend their entire lives underwater. But they can do something that most other amphibians cannot do. 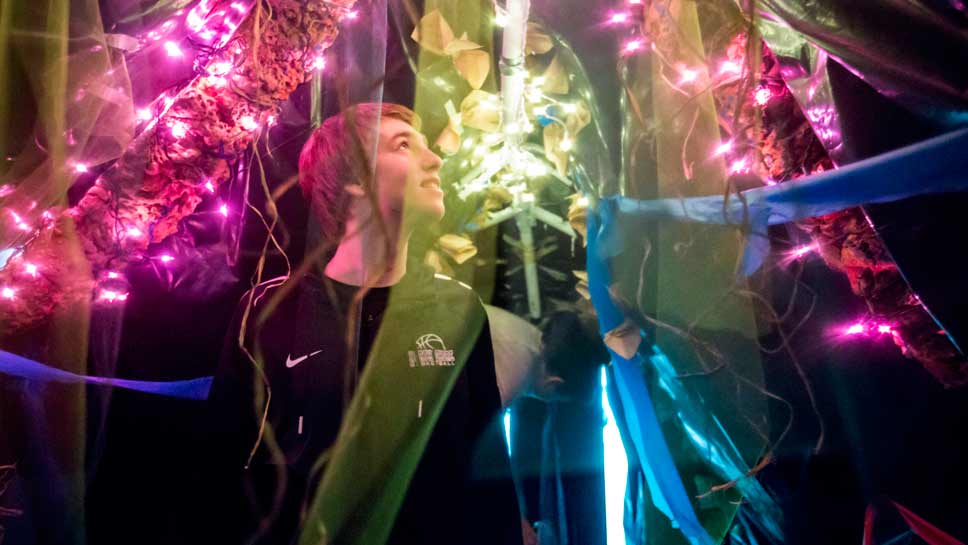 Axolotls are capable of full regeneration of limbs, Pfannerstill explained. But unlike starfish, which can also regenerate tissue, axolotls are much more complex and can regrow bones, muscles and nerves. “And so kids are starting to think about what that means,” she said. “What could that mean for somebody with a neural injury, or a spinal cord that’s severed?”

Scientists recently finished sequencing the organism’s genome, which is 10 times larger than a human’s and the largest ever to be sequenced. By studying this organism, they hope to discover how adult cells are able to revert back to stem cells and regenerate limbs and repair spinal tissue.

“Cell division is controlled by certain genes,” Pfannerstill explained. “If scientists can use axolotls to learn more about the genetic switches that turn cell division on, they should also be able to figure out how to turn cell division off. In the next unit we talk about genetics and cancer and this is the foreshadowing of that.”

There’s also an environmental component to the project. Axolotls are currently classified as critically endangered, meaning they face a high risk of extinction in the wild. And much of that is because of human interference—both through the introduction of invasive species like carp and tilapia into their natural habitat and through pollution.

“Part of the reason the axolotl is endangered is because of habitat destruction,” Pfannerstill explained. “Humans are impacting natural ecosystems by polluting the lakes and rivers with industrial fertilizers and garbage. It’s important for [the students] to see that humans have a hand in that. There’s also a cultural aspect when we think about the overpopulation in Mexico City. So we can go across disciplines and not only think about it from a biological sense, but also with a social science lens, and ask why are we polluting the rivers? Well, one of the reasons is that too many people live in Mexico City and they have no place to put their garbage.”

Junior Justin Hartley focused mainly on the human interaction piece of the project and spent most of his time working on the posters and wall art that represented Mexico City and the underwater habitat of the axolotl.

“I know that we as humans do a lot of things that aren’t OK, but learning that we could end such an amazing species that is the best example of evolution is really sad and unfortunate,” he said.

To help bring awareness to the plight of the axolotl, the students hope to design and sell t-shirts, and donate the proceeds to an organization that works to protect endangered species. They also invited the Lower School students and the Middle School science classes to tour the organism they built, explaining its anatomy and physiology as well as teaching the importance of taking care of the environment. Winder Holeman’s Lower School Spanish classes also took part in the project, writing stories and learning about the cultural significance of the axolotl.

“The idea in the end is that they become the experts and that they spread this word on to others, and they are the ones to affect change” Pfannerstill said.

The axolotl will be on display through March 2.