The videos are always a hit in the far end of the North Shore, but this year’s short has hit a chord beyond the community. It has the most views of any video on the LFHS New Media Facebook page – at more than 20,530 views by 3:40 p.m. on February 27. It even made WGN-TV’s Morning News and 10 p.m. newscast on February 26.

Why is this year’s “Lake Forest-Lake Bluff Rap Battle” going viral? The video’s producers, LFHS seniors Annalise Craig and Whitney Perschke, acknowledge the rap theme has been done many times before. But one thing they agree on at the outset of the video is that it has never (until now) been done by girls.

“I knew the video would definitely become popular in the community but I had no idea WGN would take a liking to it,” Craig told DailyNorthShore. “I can’t pinpoint why it has gotten popular outside of the community but as for going viral in Lake Forest and Lake Bluff I think it’s because this is the most over-the-top version of this particular rap battle that has ever been produced. And not only that but we had our teacher Mr.Wanninger who actually did DJ in real life in it, and we also had our wonderful principal in it as well, who is a very talented music artist too. I think it was just so funny and well produced that people in the towns took a liking to it!”

LFHS New Media instructor Steve Douglass said Craig and Perschke raised the bar on the project. “The girls spent countless hours contacting local businesses, following up with managers, coordinating extras and making sure the look and feel was consistent,” he said. “It was an awesome group effort with senior Colin Gregg leading the way on camera and sophomore Caroline Zeeman organizing all of the schedules and details. They had at least 25 different setups and solved a lot of problems along the way.”

In addition to Craig and Perschke dancing and rapping on why their community is the best, the video features several classmates and was shot at iconic local places such as Market Square, the Deer Path Inn and Market House in Lake Forest and Lake Bluff Brewing Company, Inovasi and the gazebo in Lake Bluff. It includes a surprise visit from LFHS Principal Chala Holland, who provided feedback and shared her sense of humor with the students while they were creating the video. She also gets a starring role about two-thirds of the way in and even wrote her own lyrics.

Her message: “Strongly unified, that’s when we’re at our best.” 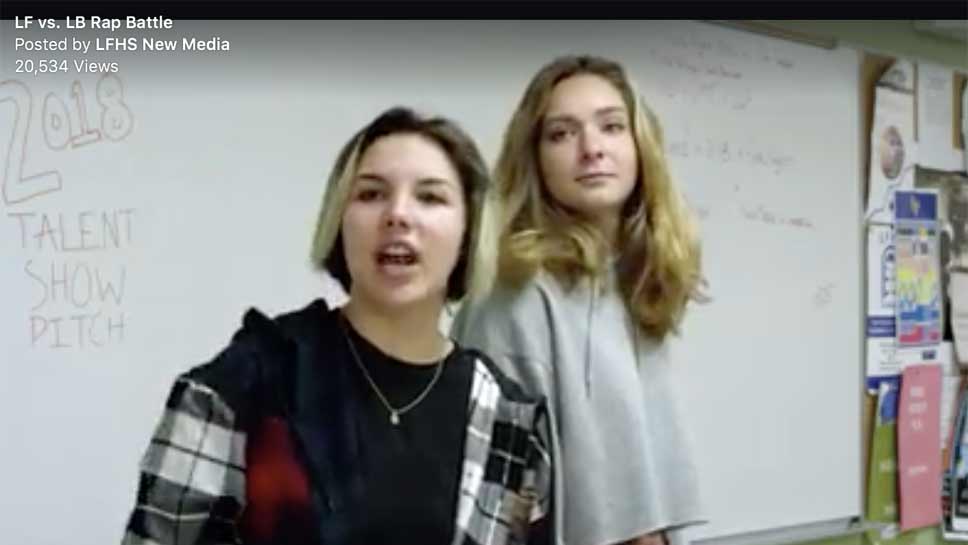 Annalise Craig and Whitney Perschke’s “LB vs LF Rap” video is going viral. To view the video, copy/paste this link into your browser: https://www.facebook.com/lfhsnewmedia/videos/1412282675563781/