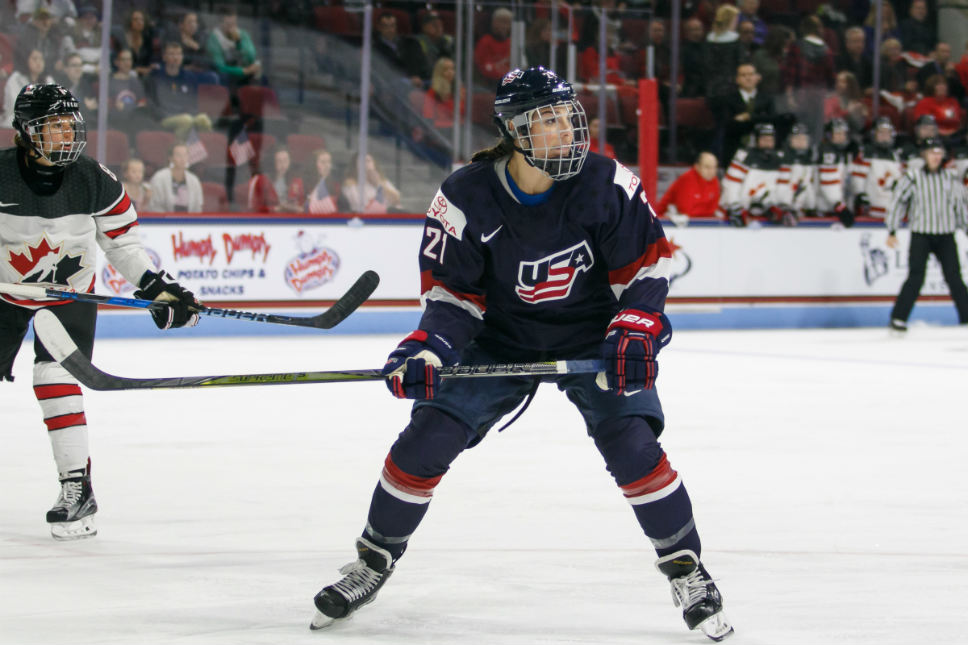 Former Lake Forest resident, Hilary Knight, was one of the stars of the USA women’s hockey team, which earned a gold medal at the 2018 PyeongChang Olympics last week.

Hilary Knight practiced with the Anaheim Ducks (formerly Mighty Ducks) of the National Hockey League in 2014.

It made international headlines.

But Knight, a former Lake Forest resident and now a 28-year-old USA women’s hockey star forward, had become mightily accustomed to skating with males way before then — as a local Falcons Hockey Association youth player. FHA teams train and compete at rinks in Highland Park, Lake Forest and Lake Bluff.

Only 10 girls, Miller figured, were FHA players in Knight’s early years on the ice.

Knight, a three-time Olympian, and her USA hockey teammates had a reason to soar in South Korea last week. The red-white-and-blue squad captured gold at the 2018 PyeongChang Olympics, edging rival Canada 3-2 in a thrilling shootout decision on Feb. 22.

New Trier sophomore left wing Mae Olshansky stayed up to watch every minute of it, including the moment the 5-foot-11 Knight redirected a shot by Sidney Morin on a power play to give Team USA a 1-0 lead with 26 seconds left in the first period.

Knight had scored her first goal of the Games in a 5-0 defeat of Finland in a semifinal on Feb. 19.

“She’s patient with the puck, and she has an insanely hard shot,” said Olshansky, who scored twice and had two assists in NT’s 10-0 defeat of Evanston in an Amateur Hockey Association Illinois (AHAI) state quarterfinal on Feb. 22.

“I’ve admired and enjoyed watching Hilary since I was 9, when I saw her do tricks with the puck and score goals for [the University of Wisconsin] on YouTube videos.”

Knight has been a part of seven IIHF gold-medal teams.

“I got to sit right behind the glass in that game,” recalled Olshansky, who also lauded Knight’s passing ability and willingness to fearlessly block shots.

Knight — who was born in Palo Alto, California, and whose cousin, Chip Knight, is a three-time Olympic alpine skier — helped the Wisconsin Badgers claim two Division I national championships (2009, 2011) before bowing for silver medals at the 2010 and 2014 Winter Games. She plays professionally for the Boston Pride of the National Women’s Hockey League.

“Hilary is a strong, hardworking player,” said Liz Zorn, coach of Scouts Hockey, a prep club of players from several schools, including Lake Forest and Highland Park high schools. “She’s a leader for her team and an ambassador for the women’s game.

“Our players look up to her and talk about her exceptional shot, especially after her performance at the NHL skills competition [at last month’s All-Star Game weekend in Tampa, Florida].”

Knight, who has played professionally for five seasons, was selected fourth overall by the Boston Blades of the Canadian Women’s Hockey League (CWHL) in 2012 and finished third in the league in scoring her rookie season en route to becoming the first American to earn league MVP honors.

“I’m impressed by all parts of her game,” Zorn said.

“That gold-medal game [in South Korea],” she added, “was an awesome match. It’s nice that the rivalry between the U.S. and Canada continues to be strong and produce competitive, physical games. Each Olympic cycle brings even more talent and growth to the sport.”

Former Lake Forest resident, Hilary Knight, was one of the stars of the USA women’s hockey team, which earned a gold medal at the 2018 PyeongChang Olympics last week.