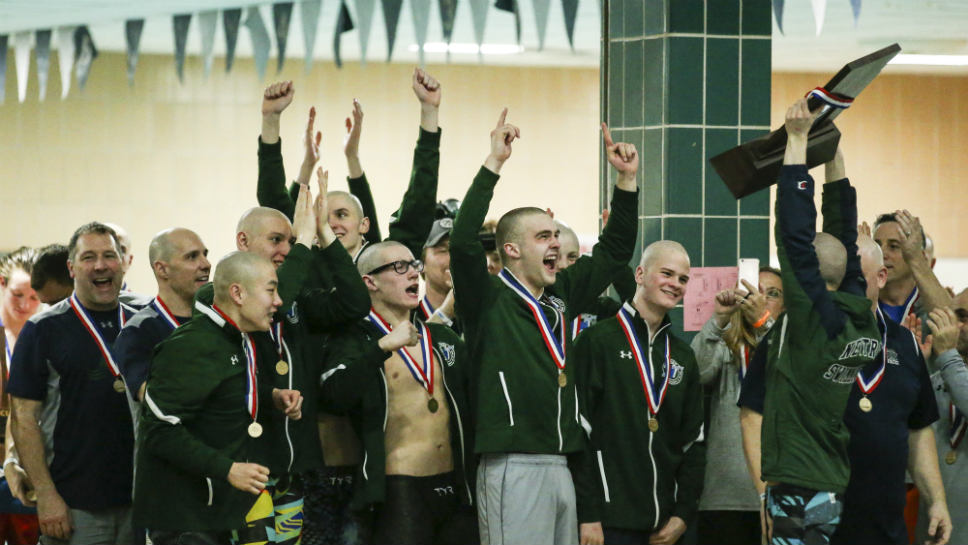 Members of the New Trier boys swim team celebrate after receiving their first-place trophy at the state meet. PHOTOGRAPHY BY JOEL LERNER

A state football champion did all he could to avoid crying near a swimming pool last weekend.

Josh Runkle failed to do so.

New Trier’s boys swimming coach — a member of a Peoria Richwoods High School Class 5A football state championship team in the 1980s — had to collect himself in front of a trio of journalists before finishing a thought at the state swimming and diving meet at Evanston Township High School on Feb. 24.

“I can’t even look at them [his seniors] now,” an emotional Runkle, with his back to NT’s seniors, said. “I came in with them [as head coach in 2014-15, also his seniors’ freshman year]. They’ve been great competitors, great kids. I’m going to miss them, all of them.

“I’d probably lose it if I look at them.

He then … lost it, briefly.

“The bus ride home is going to be hard.”

Trevians senior Charlie Scheinfeld had another magnificent state meet, winning the 100-yard breaststroke (53.72) for the third year in a row and garnering three more golds (200 IM and as a member of the 200 medley and 400 freestyle relays).

The University of Texas recruit had set the state mark in the 100 breaststroke with a 53.6 in the preliminaries session on Feb. 23.

“Such a competitor, such a horse,” Runkle said of Scheinfeld, the breaststroke leg of the state-record 200 medley unit (1:29.53 in the prelims, with seniors Patrick and Ryan Gridley and sophomore Pearce Bailey) and the anchor leg of the 400 free crew (3:01.29, with the Gridley brothers and senior Ean Vandergraaf).

“The whole weekend was fantastic; we over-performed,” Ramblers coach Mike Hengelmann said, adding each of the team’s state swim entries dropped time in the prelims. “Luke established himself as a big-time swimmer in the state. And Tommy … I thought I had seriously hurt him with a bear hug after he qualified [with a prelim clocking of 21.3] to swim [Saturday].”

An LA relay last scored at state in 2013, Hengelmann noted.

“Take it out fast and try to hang on,” Shapiro, a third-year state qualifier, said of his race plan for the 200 free. “I felt no pressure. The state meet is about having fun.”

Shapiro’s state-meet experience in each of his freshman and sophomore seasons ended after one day.

“The moment I walked in [on Day 2, Saturday, last weekend], I thought, ‘Wow, I get to be here with the best,’ ” Shapiro said. “Fridays at state are hectic; today [Saturday] is more controlled.”

Two Glenbrook South freshmen — Quinn Loughran and Max Iida — each swam in a consolation final at state and swam the middle legs of the Titans’ 200 medley relay (12th, 1:36.18, with sophomore Adam Zuiker and senior anchor Nick Shechtman). Loughran tied for 11th place in the 100 butterfly (50.41), and Iida placed 12th in the 100 breaststroke (58.13).

“I swam my heart out,” said Iida, who missed matching the school record in the 100 breaststroke last weekend by 0.25. “I won’t be as nervous next year.”

A combined four entries from Highland Park and Lake Forest high schools competed in the state prelims last weekend but did not advance to the finals session on Saturday. HP Giants junior Andrew Vorobev placed 19th in the 200 IM (1:55.76) and 32nd in the 100 fly (52.02). 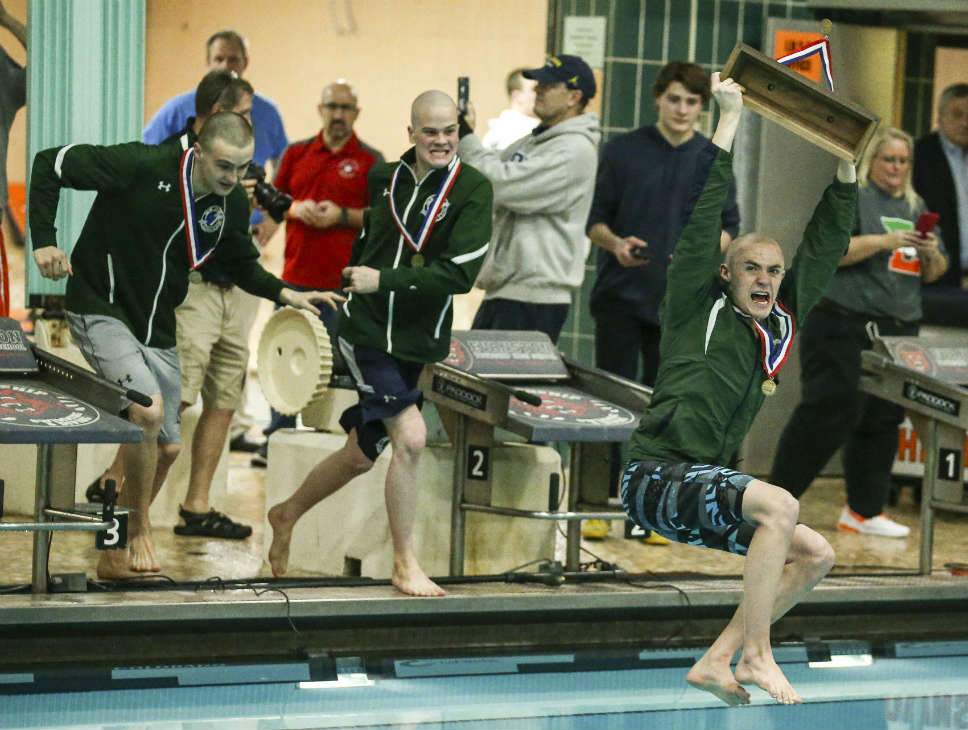 Ean Vandergraaf jumps into the pool with the first-place trophy. PHOTOGRAPHY BY JOEL LERNER 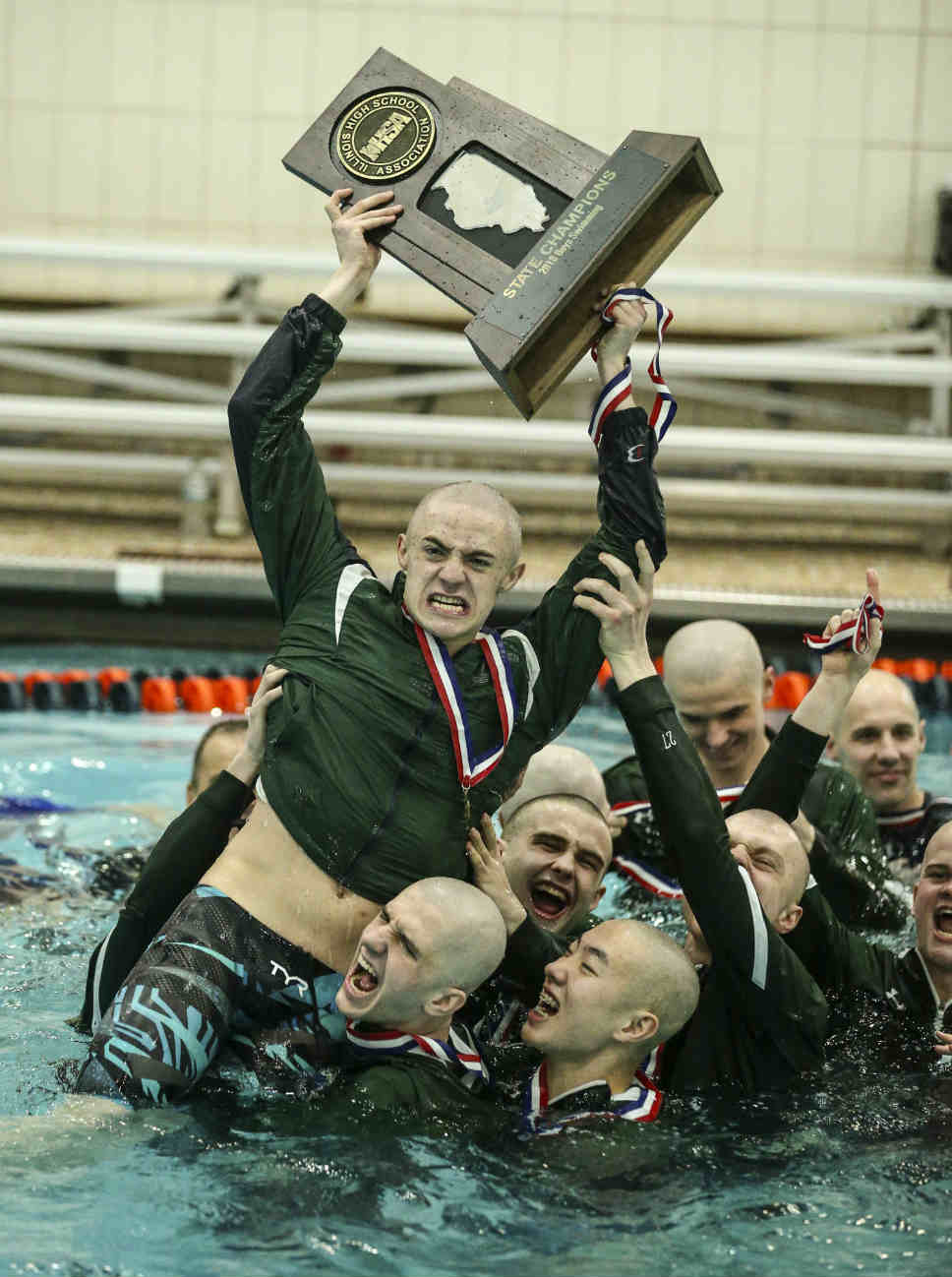 Ean Vandergraaf holds up the trophy as his teammates keep him above water. PHOTOGRAPHY BY JOEL LERNER 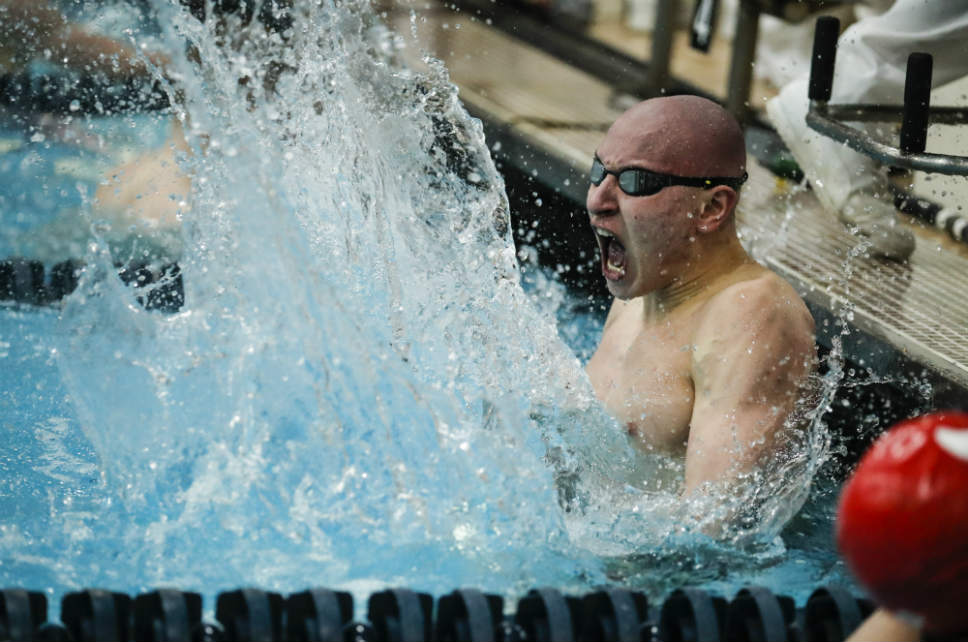 Charlie Scheinfeld of the Trevians reacts after winning the state 100 breaststroke. PHOTOGRAPHY BY JOEL LERNER 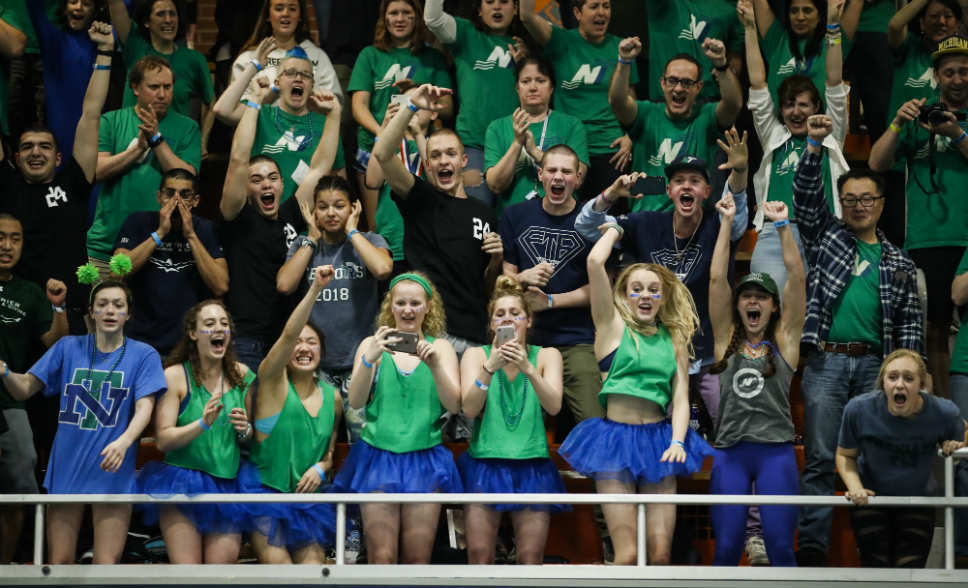 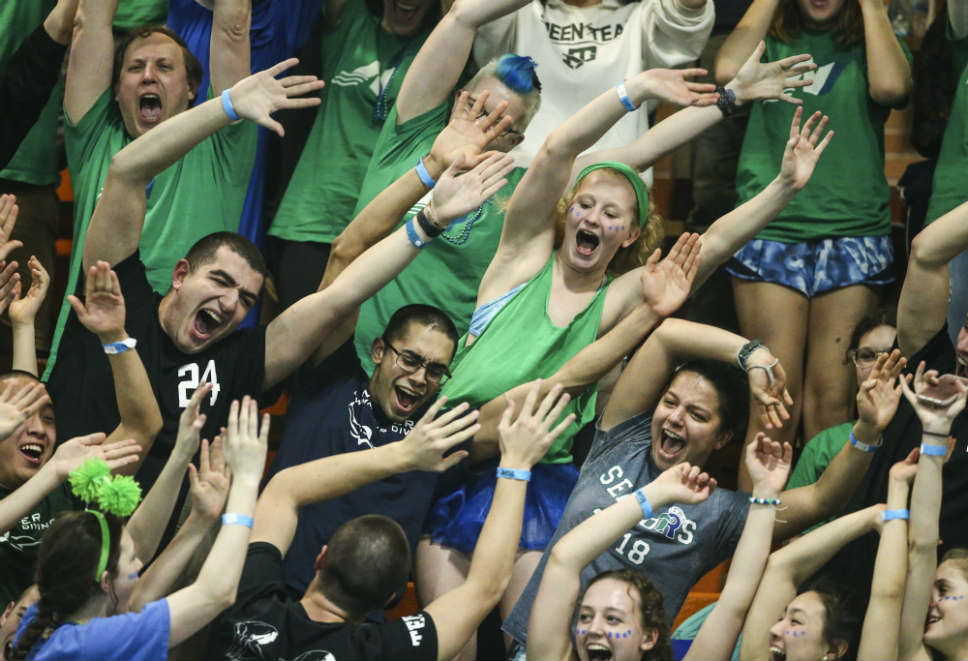 NT fans continue to cheer on their team. PHOTOGRAPHY BY JOEL LERNER 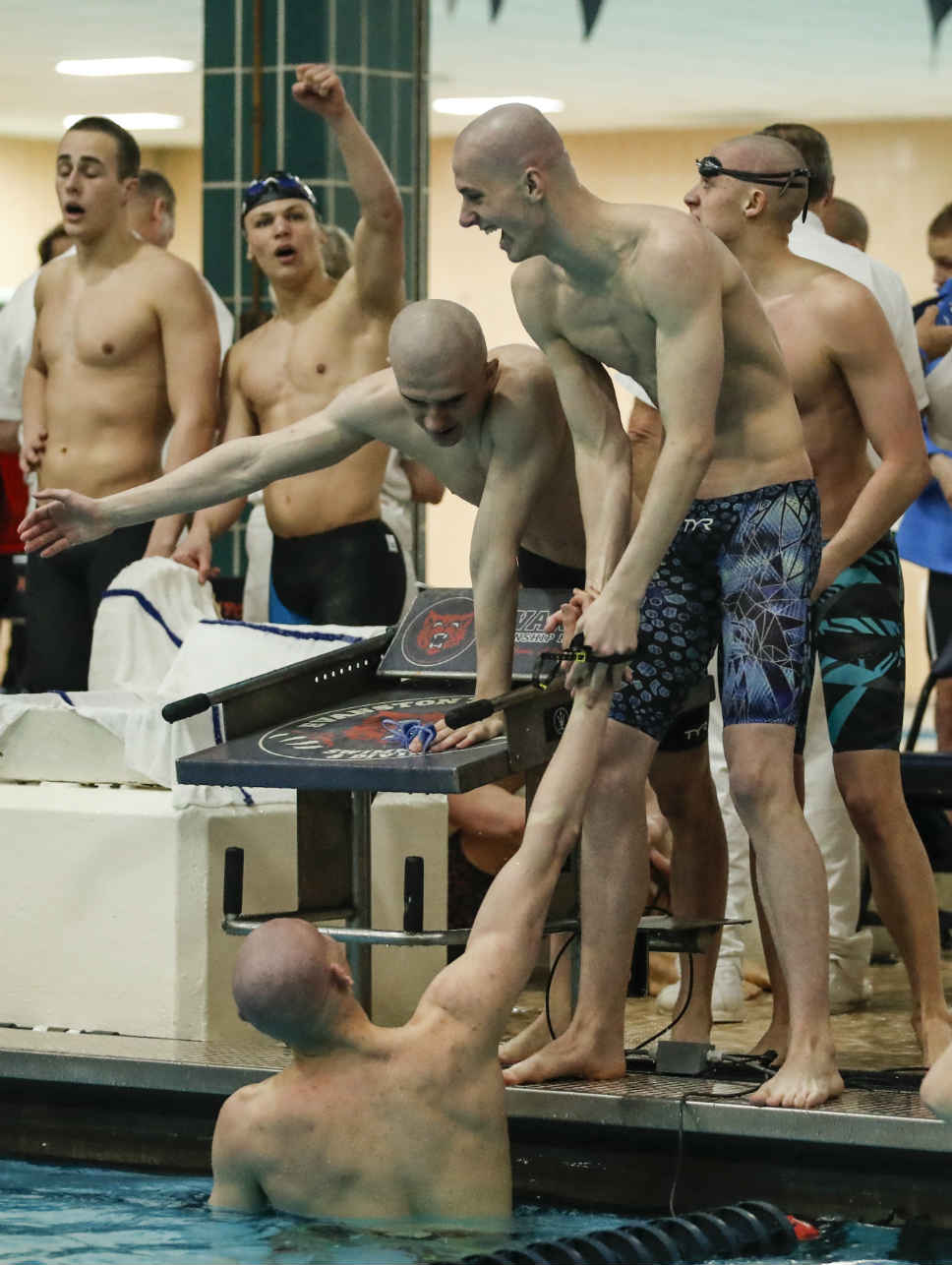 Patrick and Ryan Gridley celebrate with their 400 free relay mates as the Trevians cap off the state meet with a win. PHOTOGRAPHY BY JOEL LERNER 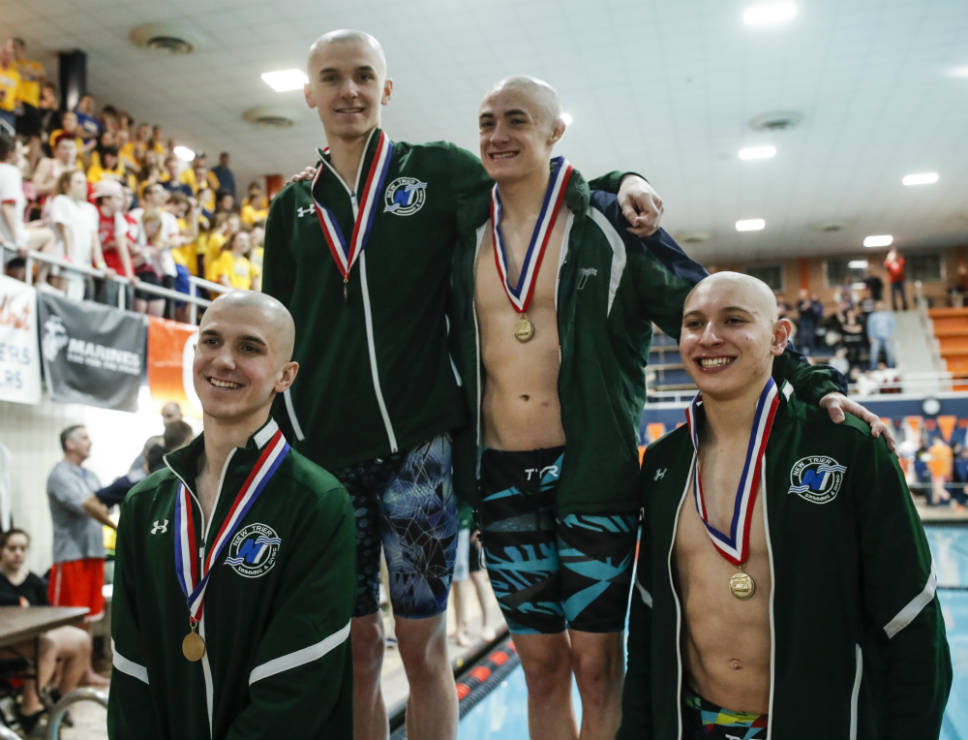 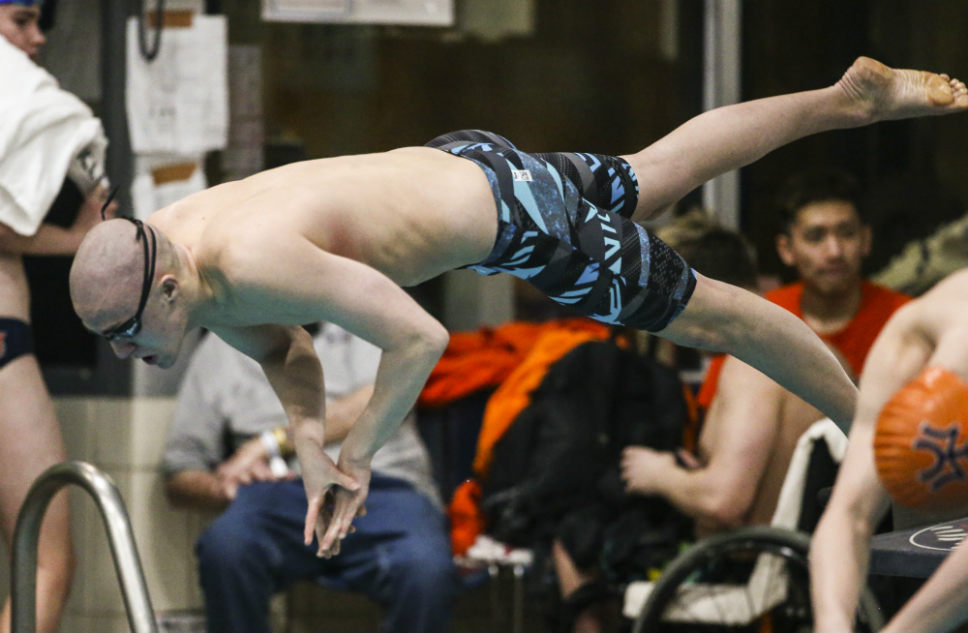 Ean Vandergraaf of the Trevians competes in the 200 freestyle. PHOTOGRAPHY BY JOEL LERNER 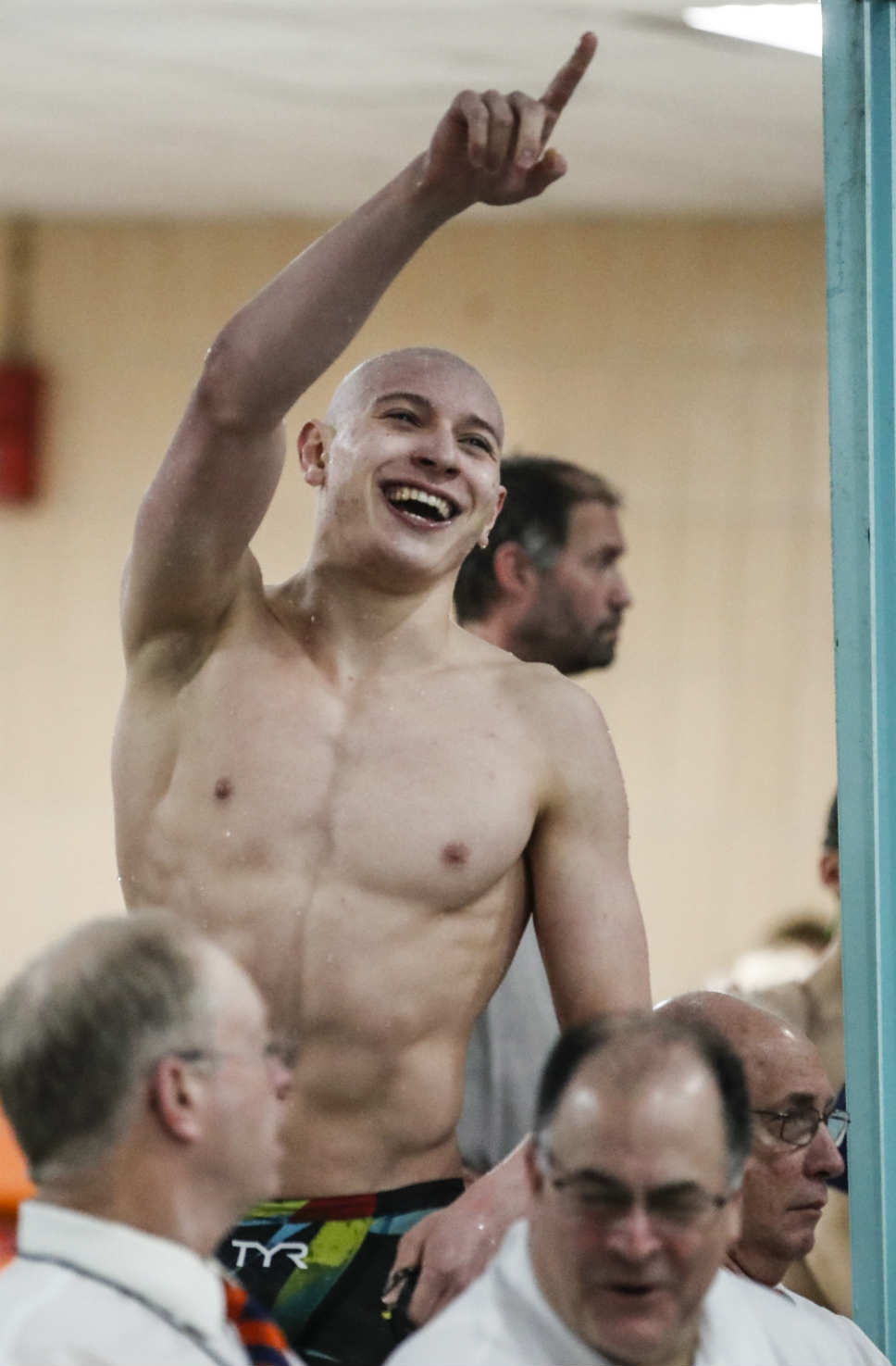 New Trier’s Charlie Scheinfeld smiles and points to the fans after winning the 200 IM at the state meet. PHOTOGRAPHY BY JOEL LERNER