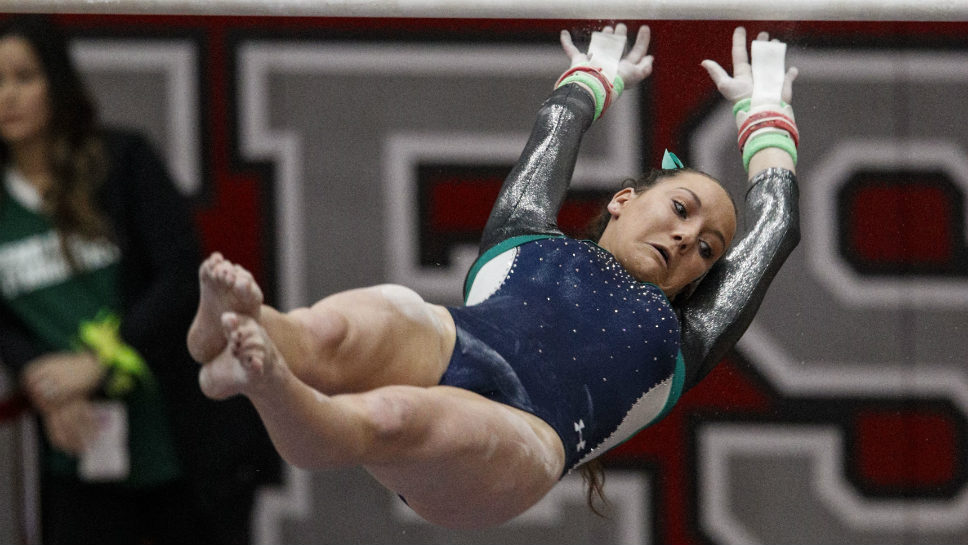 It was impossible for the three New Trier Trevians to hide their emotions at the girls gymnastics state meet at Palatine High School last weekend.

The school’s main gym had been turned into a mat-covered stage for highly athletic performers on Feb. 16-17 — without a curtain.

“We were ready, with the whole team pumped up after an awesome practice [on Feb. 13],” New Trier coach Jennifer Pistorius said near the end of the individual finals session on Feb. 17. “We weren’t happy to be here; we were here to compete for a trophy [top three finish].”

“We had some tough moments this weekend,” Pistorius admitted. “We also had a lot of highlights.”

One of the highlights: Barkal’s 9.6 vault in the state preliminary session on Feb. 16; the mark ranked fifth among all vaulters and landed her a finals berth in the event. The junior — a qualifier in the all-around and in three events — had suffered a serious right ankle injury while working on a floor-exercise dance connection at the Trevs’ practice on Valentine’s Day.

“I’d heard her described as a beast of a competitor,” Pistorius said. “It’s why she was able to compete for us this weekend. To score what she scored on vault, with that injury, with the pounding that ankles take in this sport … amazing; she was amazing. She wanted to compete in everything. The only thing we took out was her double-back on floor.”

Barkal (18th in the all-around, 36.425), alas, could not compete her vault in the finals session. She aggravated the injury later in the prelims and had to sit next to her crutches in bleachers (while wearing a protective boot) on the second day of the meet.

“She’s the toughest person I know,” said Murdock, a sophomore and the reigning balance beam state champion (with Pistorius’ daughter, Maine South’s Caleigh Pistorius) when she mounted the beam as a finalist last weekend.

Murdock (15th in the all-around, 36.675) looked strong and smooth on the beam before the start of her difficult back handspring layout/step out.

Murdock fell at the end of the maneuver and pursed her lips during her remount.

“Too archy, after being so calm and cool at the start,” Pistorius said, adding Murdock recovered nicely in her 8.8 (eighth place) routine.

Murdock had received a hug from her good friend, Caleigh Pistorius, along with a jump/double high-five from senior tri-captain Rohrer, right before her turn on beam. Rohrer had tied for 11th place on the uneven bars with a 9.35 in the previous day’s prelim segment, missing a finals slot in the event by a scant 0.025.

Pistorius’ reaction to the routine: “Gorgeous.”

Rohrer was NT’s lone senior on its state team.

Rohrer, who loves to compete as much as she loves to be a part of a team, gave her Trevs a galvanizing pep talk before the team’s last event (vault) in prelims. Rohrer landed both of her vaults but showed a side of her that Pistorius hadn’t witnessed during the Trevian’s decorated three-year career.

“She cried,” the coach said. “It hit her, hit her hard, the realization that her high school gymnastics career was over.

“You know what else was nice about this weekend?” Pistorius said. “A lot of our young gymnasts who attended this meet watched the routines from the stands and thought about adding some moves to their routines; they’re already thinking about next season.”

On Murdock’s mind, shortly after the conclusion of the finals session last weekend?

“We’ll be ready to come back here next year and … place,” she said.

Murdock’s lips were no longer pursed.

They hadn’t formed a smile, either.

Lake Forest High School: The Scouts’ lone qualifier, freshman Kristin Fisch, suffered a serious leg injury during her floor-exercise routine (7.75) at state last weekend and could not compete on vault because of it.