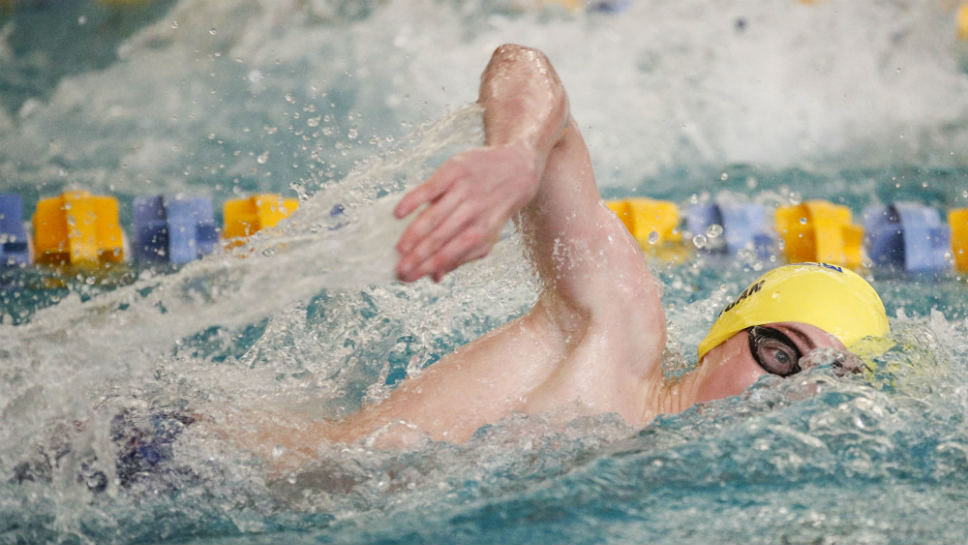 Luke Lanigan put down the golf clubs last fall and found himself in a body of water for an extended period of time.

No, the Lake Forest High School sophomore hadn’t gone fishing for an errant tee shot on some difficult golf course. He was swimming in a pool, lap after lap after lap.

“I wanted to focus on swimming,” recalls Lanigan, a competitive golfer in middle school and a member of the Scouts’ freshman golf squad in 2016.

And a serious swimmer. At a sectional meet in the home water on Feb. 17, Lanigan touched first in the 500-yard freestyle with a time of 4:49.51 — after entering the race with a seed time of 5:06 — and later qualified for state in another event (as a leg No. 2 in the 400 free relay, with senior Colin Robinson, junior Carlos Minetti and sophomore Oliver Akintade).

“He’s tenacious, just tenacious,” LFHS coach Cindy Dell says of Lanigan, whose third-place showing in the 200 free (1:45.85) missed the state cut in the event by 1.53 seconds. “Luke committed himself to swimming, became a true year-round swimmer, and now everybody can see the benefits of that decision. He’s a very efficient swimmer.

“You know what else he is?” the coach adds. “Luke is a 5-foot-7 giant, with mental toughness and no fear when he races.”

Robinson-Lanigan-Minetti-Akintade beat Libertyville’s runner-up entrant by a little more than three seconds in the final event of the sectional.

“We were all pumped up to go against Libertyville and a couple of other teams,” Lanigan says. “We’d known, since January, we had a good chance to get that relay to state. Exciting. What an exciting way to end a meet.”

What thrills Dell is the significant progress Lanigan made from his freshman season to his sophomore season. Lanigan swam a 5:04.12 in the 500 free at a sectional last year, or nearly 19 seconds slower than the 2017 state cut in the event.

“He’s less serious this year, but that’s a good thing because he’s more relaxed and more familiar with his teammates and what’s involved in a varsity season,” Dell says. “Luke has a great sense of humor, likes to joke around. But he’s also a great team guy, a guy who knows when it’s time to focus and concentrate on what he has to do as a competitor.

“We changed up his training a bit this year, diversified it,” she adds. “There’s more of a mindfulness element to it. The visualization, the relaxation … those things are helping Luke race better than ever.”

What will likely be par for the course in swimming for the former serious golfer next winter and the one after that: a state-meet appearance.

Notable: The two-day boys swimming and diving state meet starts at Evanston on Feb. 23. … Lake Forest HS finished runner-up (212 points) to Libertyville (234.5) at its sectional on Feb. 17. “I’m in awe of the boys,” Scouts coach Cindy Dell says. “To take second, at a sectional — that’s an incredible victory in my mind.”