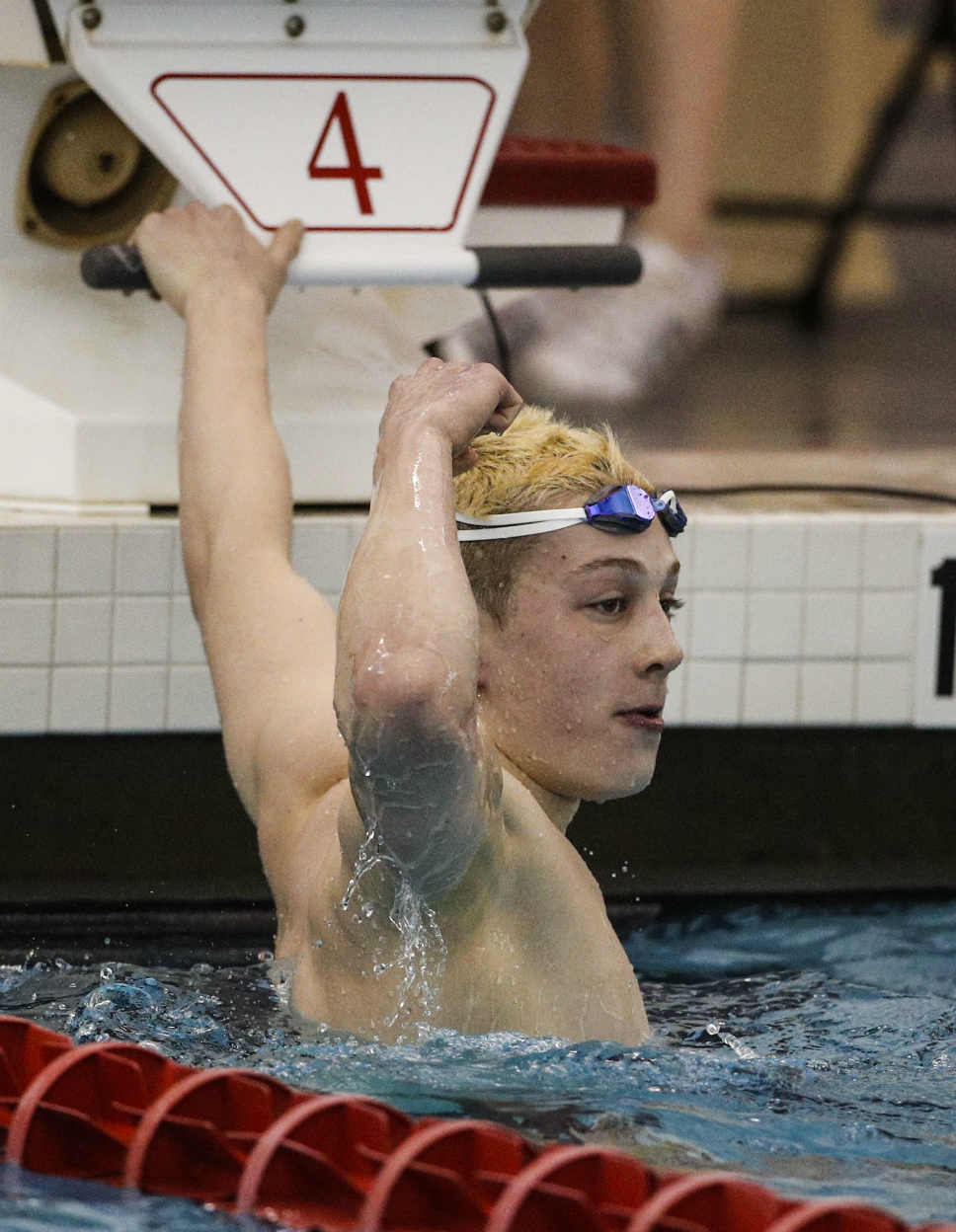 Glenbrook North’s Jake Shapiro reacts after winning the 100 freestyle in school-record time at the Deerfield Sectional. PHOTOGRAPHY BY JOEL LERNER

The world is his oyster.

That idiom — from William Shakespeare — comes off as a little trite when describing swimmer Jake Shapiro.

All that. And more. Shapiro also has a winning personality and a keen sense of humor.

Such a score is perfectly normal for someone in the Shapiro family.

His brother Daniel, who currently is majoring in biology and physics at Yale University, scored a 36 two years ago.

“It was kind of expected [of me],” said Shapiro, who was smart enough to skip eighth grade a few years ago.

He’s the math whiz in the family. As a member of the Glenbrook North Math Team, he took second place at the 2017 Illinois Council of Teachers of Mathematics (ICTM) state contest.

“Got four wrong,” said Shapiro. “The first-place finisher had a perfect score. Nothing I can do about that.”

Last November, Shapiro and some of his GBN classmates competed in the Princeton University Mathematics Competition. He shined again, coming home with a second-place finish in geometry.

His numbers on a swim stat sheet? Just as impressive.

On a day when the Spartans broke seven school records and placed second in the team standings behind Glenbrook South 248-242 at the Deerfield Sectional on Feb. 17, it was Shapiro and fellow teammate Ryan Purdy who stole the show.

Shapiro started his day by setting a school record in the 200 free in a second-place time of 1:39.48. (First-place went to St. Viator’s Michael Balcerak, who took third in state last winter).

“I didn’t think breaking those records were possible, until I started seeing my times come down in December,” said Shapiro.

GBN head coach Kirk Ziemke was ecstatic — and relieved — to see that 100 free record fall by the wayside.

To him, it was a relic. Antique-ish.

“Had to get rid of that old record. It was an embarrassment,” said a half-joking Ziemke. “Enough is enough.”

Ziemke, who is in his fourth season as GBN’s head coach, felt the same way about the school’s 400 freestyle relay record. It also was set 31 years ago.

“Records aren’t supposed to last 31 years,” said Ziemke. “I told the guys to take it down. Told them to dismantle it.”

So you can imagine Ziemke’s delight, when Shapiro, Purdy, Fabian JuJescu and Anton Ivanchenko teamed up to win the final race of the day in 3:08.71.

“Thirty-one years is an incredibly long time,” said Shapiro. “We had to break it. No reason not to.”

Shapiro’s afternoon also included a successful leg in the 200 free relay. He and three of his sidekicks — JuJesca, Daniel Kaufman and Tony Mrozowski — placed third in a state-qualifying time of 1:27.11.

Ziemke expected this kind of success from Shapiro, who earned four golds at the CSL North Meet at Maine West on Feb. 10.

“His technique is flawless,” said the GBN coach. “He trains hard. Trains smart.

“He’s a great athlete with a great feel for the water,” Ziemke added.

And his offseason training? It’s top-notch. He competes with the Glenview Titans Aquatic Club (GTAC) where he receives stroke training from one of the masters: Steve Iida.

He’s got the best of both worlds.

“I don’t focus so much on technique when I’m swimming for GBN,” said Shapiro. “It’s just training.

“Coach Kurt beats us up pretty good during the season,” he added. “It hurts. It’s horrible. And when it pays off [like it did today], it’s all worth it.”

Having a teammate like Purdy also has been beneficial for Shapiro. They not only form a potent 1-2 punch, but they also have “clicked really well” out of the pool.

“I think Jake and Ryan do a great job of feeding off one another,” said Matt Purdy — Ryan’s dad, GBN’s assistant athletic director/assistant head football and swim enthusiast. “They’re competitiveness fuels the team.”

And that Shapiro personality? The elder Purdy catches it on a regular basis. 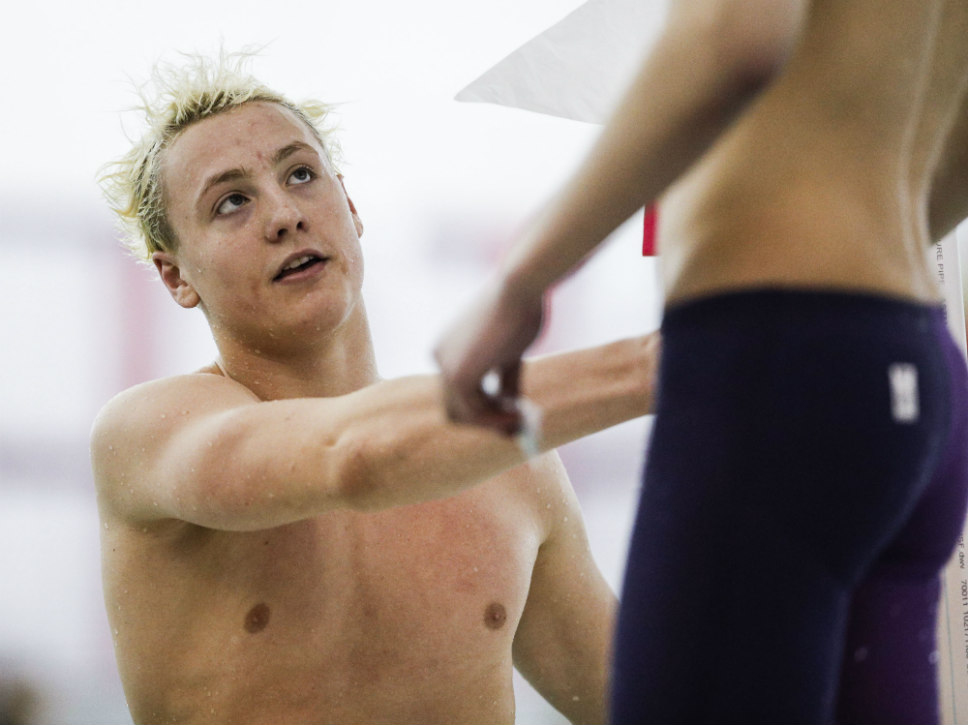 Ryan Purdy of the Spartans shakes a hand of a competitor on his way to receiving his first-place in 500 free at the Deerfield Sectional. PHOTOGRAPHY BY JOEL LERNER 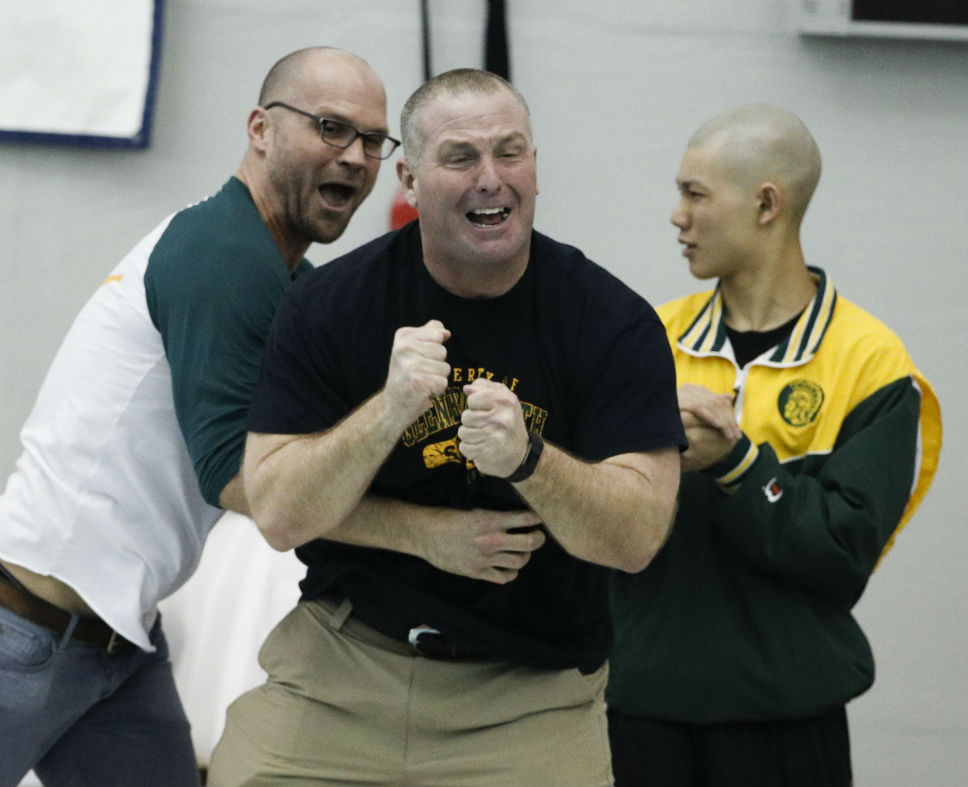 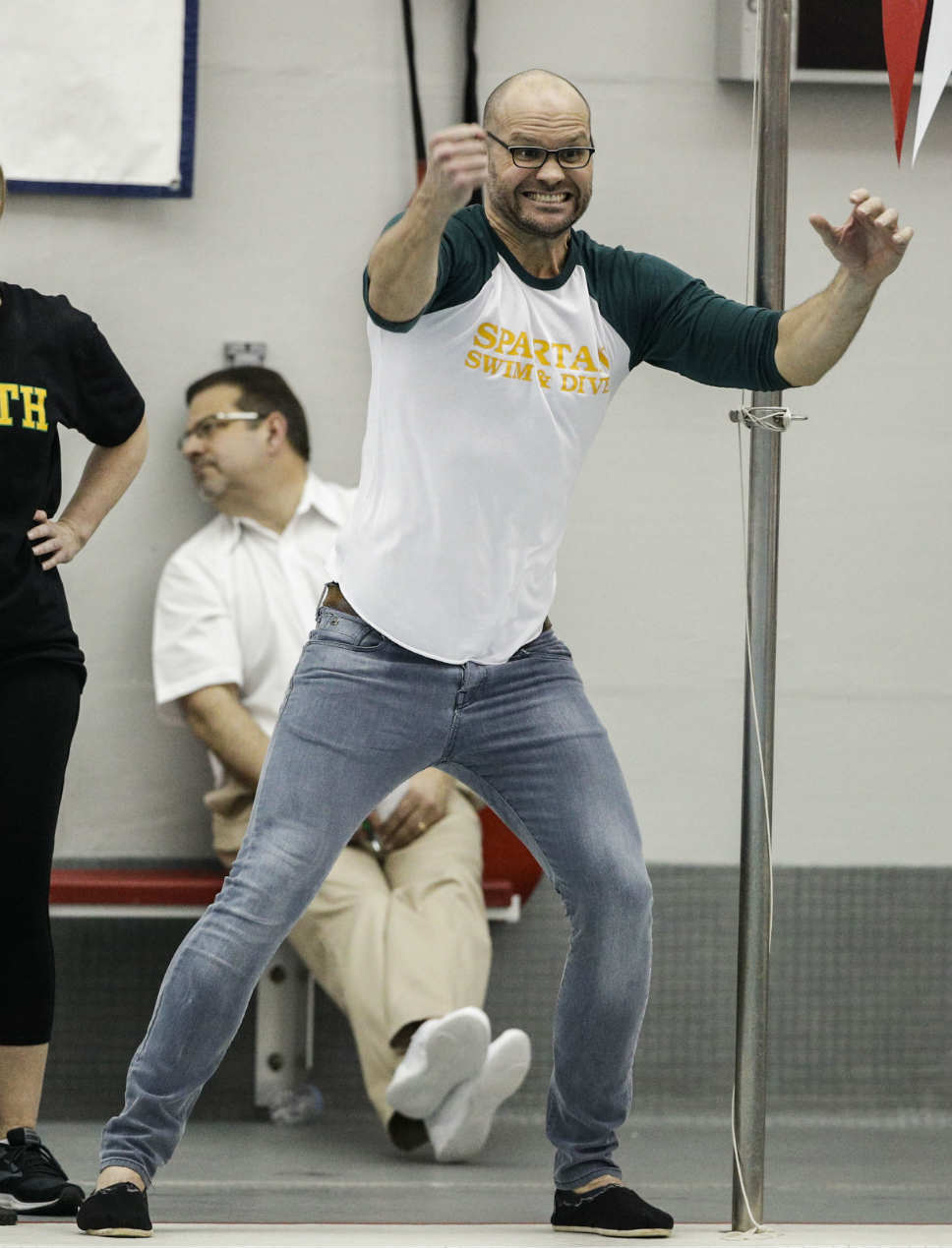 GBN coach Kirk Ziemke cheers on one of his swimmers during the sectional. PHOTOGRAPHY BY JOEL LERNER