WILMETTE – Simone Wall has been an active Girl Scout since she was in kindergarten, and now as a senior at New Trier Township High School she is seeking to accomplish the highest achievement in Girl Scouts: the Gold Award.

While many people are familiar with the Boy Scout’s Eagle Scout award, the Gold Award is a lesser-known but similar high achievement for Girl Scouts.

“It is the capstone service project for Girl Scouts,” said Wall, a resident of Wilmette.

To encourage more North Shore residents to go camping, Wall is creating a lending-library of a sort at the Winnetka Community House, where people can check out camping items and return them when the trip is over. While Wall is not an avid camper herself, she loves the outdoors and realized that many residents don’t ever try camping, because they don’t have the right equipment. 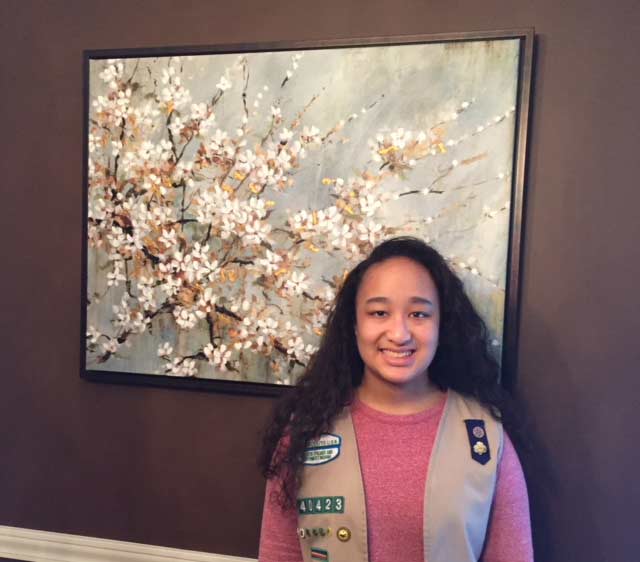 “I think people are scared to try camping because they have to buy a tent and supplies and may never camp again,” Wall said.

Wall’s project will provide residents an opportunity to try out camping without the financial commitment up front. The Gold Award requires that the project meet a need in the community and have an impact on the entire community, Wall said. It also requires a minimum of 80 hours of work.

Wall completed a Silver Award with her Girl Scout troop, when they converted a storage room in a battered women’s shelter to a playroom for kids. But the Gold Award is an independent project that required initiative on Wall’s part.

So far, Wall has raised funds through a GoFundMe site and plans to do more fundraising at a school debate tournament. She has purchased some camping items at Walmart and REI, as well as some shelving from Ikea. Wall also contacted the Community House which was receptive to her idea, and she plans to have the project up and running by the spring.

An appreciation for the North Shore, and all the opportunities it has to offer, was inspiration for Wall to complete the Gold Award. “(I wanted) to make a bigger impact on my community before I leave for college and to give back. This is a great place to grow up and I wanted to give back and add to the opportunities available,” Wall said.

Wall’s commitment to Girl Scouts stems from its focus on service. “I like the focus on character and the mission to make the world a better place. I personally like that vision,” Wall said.