On his last day, the communications center thanked Wilinski for his years of service on the radio and announced his final 10-42 (securing from duty).  Later the officers and other city departments gave him an escort to the Highland Park border on his way home.

“I will truly miss all the wonderful people that I worked with in Highland Park,” said Wilinski.

Wilinski was previously honored at the January 22 City Council meeting. Mayor Nancy Rotering congratulated him on his retirement and thanked him for his 25 years of  service as a “dedicated law enforcement official, with a strong commitment to public safety and the highest level of ethics and integrity.”

The mayor added that one of his many accomplishments was “maintaining the police department’s distinguished national accreditation status.”

Wilinski grew up in Bay City, Michigan, and met his wife, Jan, at Northern Michigan University in Marquette, Michigan.

After she began teaching at Northwood Junior High School (where she taught for 10 years) he left his job at an alternative incarceration center in Bay City to pursue a career at the HPPD as a part-time seasonal community policing aid in 1993.

Soon Wilinski was offered the position of police officer and attended the Chicago Metro Police Academy, where he served as a patrol officer for a year and spent a short time as a juvenile officer. He returned as an officer in the patrol division and was promoted to sergeant in 2003 and commander in 2008, the same year he graduated from the Northwestern University Center for Public Safety. In 2014, Wilinski was promoted to deputy police chief.

“I have enjoyed so many wonderful events, but I would have to say my most rewarding moments came from teaching new officers how to perform their jobs and seeing others succeed and get promoted to supervisory positions with greater responsibilities,” said Wilinski.

What have been some of the greatest challenges in the department throughout the years?

“One of the biggest challenges I have found is maintaining public trust,” said Wilinski. “There have been so many unfortunate events throughout our nation in the past few years involving the police that you always have to take active steps to maintain the confidence of the public.”

Wilinski explained how the community helped make him a better police officer.

“The residents of Highland Park expect very high levels of service and have an interest in receiving information on police activity,” said Wilinski. “It has been challenging at times to balance providing information to the public while maintaining the integrity of criminal investigations.”

In the meantime, he will enjoy spending more time with his wife and son in Gurnee. His son is a junior at Warren Township High School.  Wilinski said he intends to volunteer for various service organizations once he becomes acclimated to being retired.

Commander Jon Lowman has been promoted to the position of Deputy Chief of Police.

“The Highland Park team is filled with so many kind and caring people and I will miss seeing them on a regular basis,” said Wilinski. 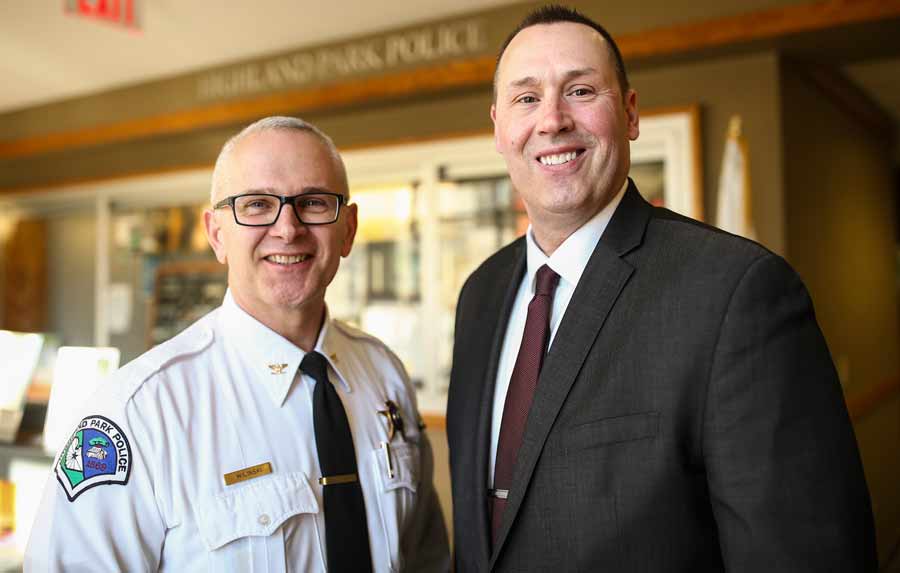