Kimie Han and Ria Honda, accomplished classical musicians though still in their teens, will soon make their national radio debut.

Han and Kim were among a 13 teenage musicians recording a classical program for NPR’s “From the Top,” February 1 at the Midwest Young Artists studio in Highwood.

The show will air on 220 stations nationwide March 4, according to David Balsom, the show’s producer. The show will not be available in Chicago, but the concert will be on the “From the Top” podcast starting February 26.

Han, a pianist, Lake Forest resident and Lake Forest High School junior, will play Recitativo-Rondo: Allegro vivo by Gaspar Cassado, a chamber music piece, with her trio—Trio Arcalima. She will be joined by Haddon Key from Lincolnshire on cello and Rebecca Moy of Naperville on violin. 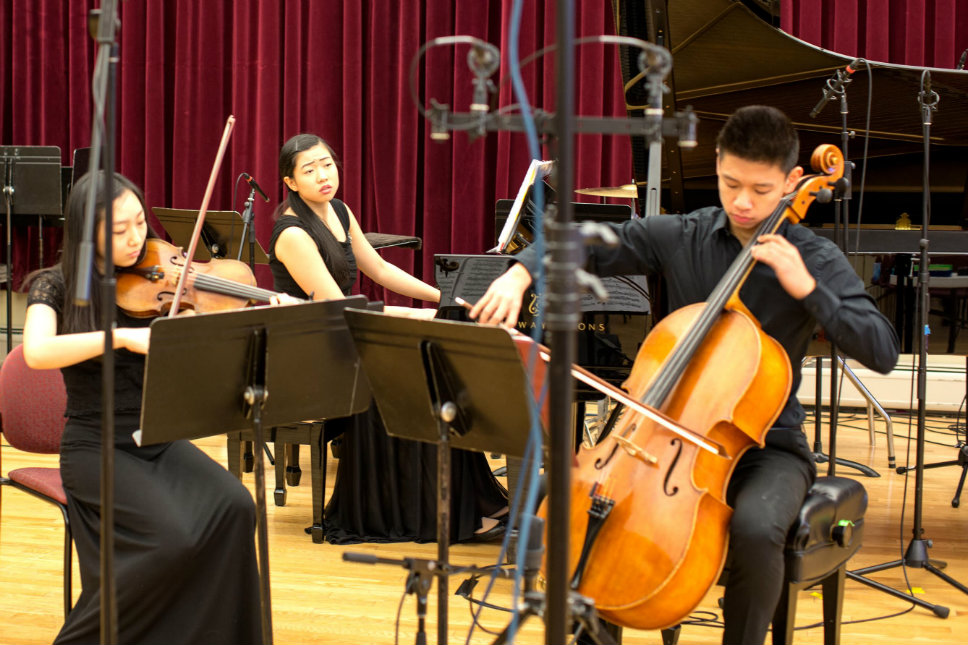 Playing their piece in the taping of “From the Top” are members of Trio Arcalima (from left) Rebecca Moy, Kimie Han and Haddon Kay. Photo courtesy of Laura Joyce-Hubbard.

Playing as a pianist in a classical trio for several years, Han said the grouping with Key and Moy is new this year. She learned she was going to be part of “From the Top” when Allan Dennis, founder of Midwest Young Artists, offered them the opportunity. Though the grouping was new, the three musicians were not strangers to each other.

“We knew each other from playing in the orchestra at Midwest Young Artists,” said Han in a DailyNorthShore interview. “We started talking to each other (in the fall) and said hey, let’s play together as a trio. We’ve had a lot of fun rehearsing.”

Honda, a violinist from Wilmette and a New Trier High School senior, has a solo. She will play the Carmen Fantasy by Franz Waxman. She got on “From the Top” through an audition while she was at the Meadow Mount School of Music in Westport, N.Y., over the summer. She did not get an immediate answer.

“I found out via email when I was back in Chicago telling me they wanted me to be a part of it,” said Honda in a DNS interview.

The Carmen Fantasy appealed to Honda because she realized the story of Carmen is more complex than most people know. She spoke of the scene where Carmen was turning over cards.

“Carmen turned over the cards and each one forecasted her death,” said Honda. “Her tale is much deeper than that. She realizes how she should live. I really wanted to perform that piece.”

“From the Top,” which first went on the air 20 years ago, was looking for an opportunity to tape its show in the Midwest, according to co-founder and co-CEO Gerald Slavet, who was in Highwood for the recording.

Slavet said he was familiar with Midwest Young Artists and Dennis. He reached out and the two of them put the event together. While all the performers other than Han and her trio auditioned, Slavet said Dennis’ word was good enough to get the trio entre.

“He’s known all over the country,” said Slavet.

Other performers in the show are pianist George Dalianis from Park Ridge, cellist William Tan from Hinsdale and seven members of the Percussion Scholarship Group from Chicago.

Performing on “From the Top” is not Han’s first big stage. She has played with the Chicago Symphony Orchestra, and 18 months ago she was named a Lang Lang Scholar. She said that honor got her to Carnegie Hall in New York playing at a concert affiliated with the Grammy Awards in January.

“It was part of the Grammy salute to classical music,” said Han. “Lang Lang helped organize it and I got to be part of it.” 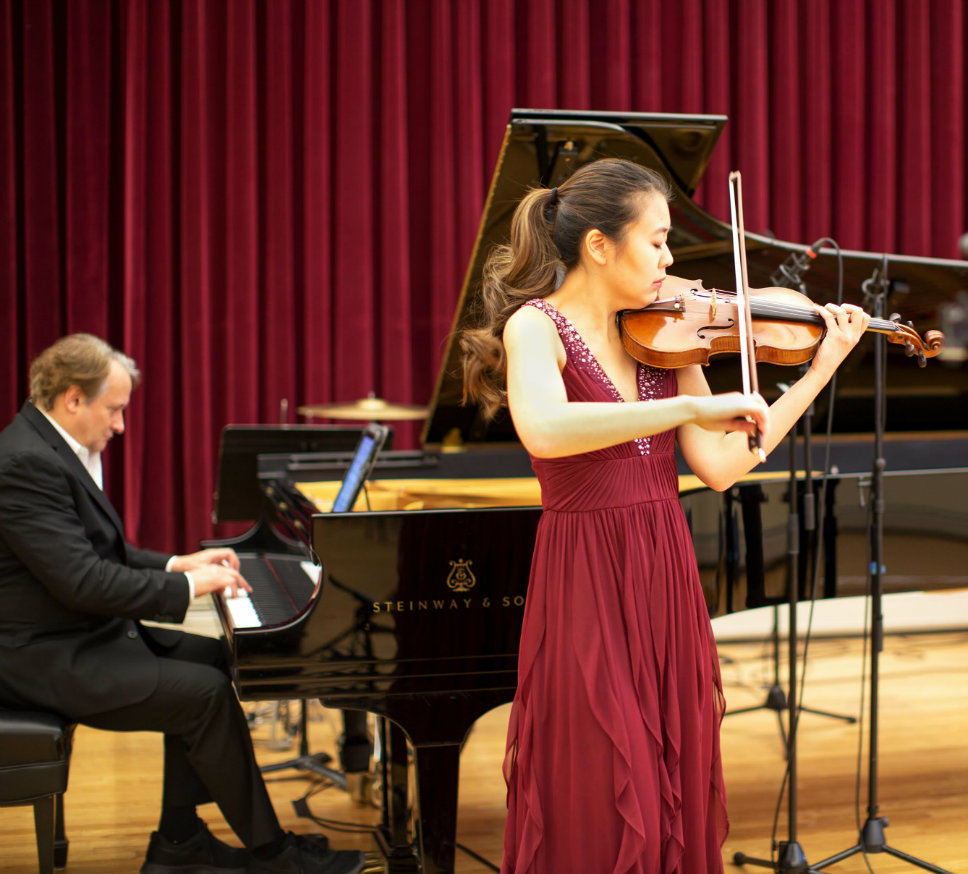 Accompanying Ria Honda on the violin is “From the Top” host Christopher O’Riley. Photo courtesy of Laura Joyce-Hubbard. 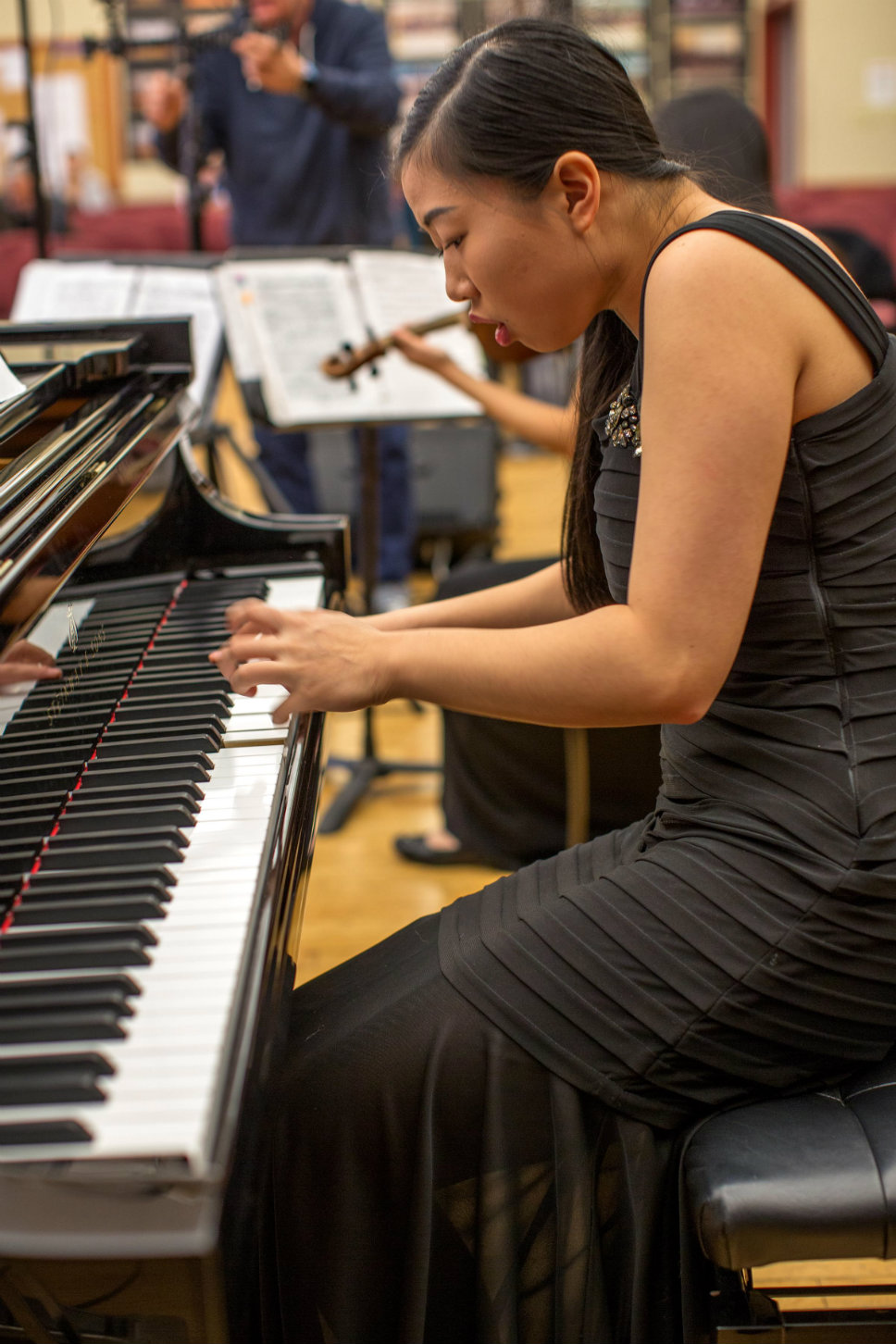 Kimie Han of Lake Forest plays piano during a taping of “From the Top” at the Midwest Young Artists Studio in Highwood. Photo courtesy of Laura Joyce-Hubbard.