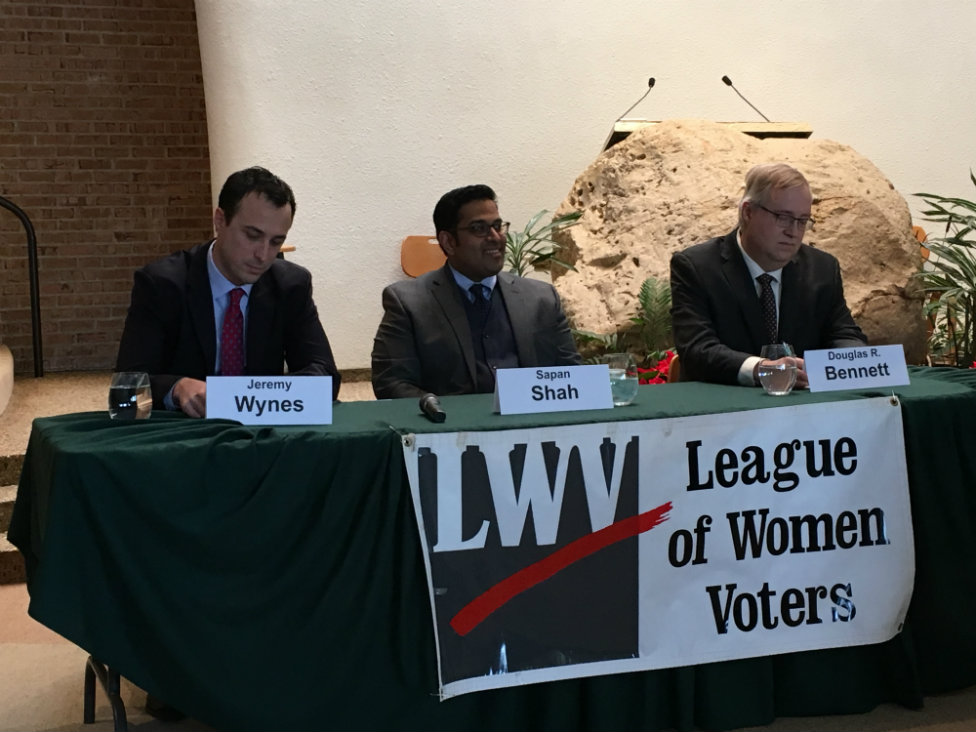 Republican candidates to represent the 10th Congressional District in the United States House of Representatives (from left) Jeremy Wynes, Sapan Shah and Douglas R. Bennett participate in a League of Women Voters Forum February 18 in Bannockburn.

A ban on assault weapons like the one used to kill 17 people at a Florida high school February 14 is one issue distinguishing the three candidates for the Republican nomination to represent the 10th Congressional District in Congress.

Douglas R. Bennett of Deerfield opposes a ban, Sapan Shah of Libertyville favors making those guns illegal, and Jeremy Wynes of Highland Park said it depends. They are competing in the Republican primary March 20.

Shah, Wynes and Bennett offered their views on gun control and a number of other issues including taxes and immigration reform during a forum before moe than 200 persons February 18 in Bannockburn sponsored by the League of Women Voters.

The first question asked by the moderator was about the candidates’ positions on gun legislation and specifically whether they would vote to ban the AR-15 semi-automatic assault rifle.

None of the three candidates specifically said during their answers to the question whether they would vote to make the AR-15 illegal. After the debate during a DailyNorthShore interview Bennett said he would not ban the weapon, Shah said he would and Wynes did not give a definite answer.

“I would have to see the specific legislation,” said Wynes. “I can’t give an opinion without reading what is proposed.”

During the post debate interview, both Wynes and Shah said they would support a bill preventing people on the terror watch list while Bennett put a proviso on his support.

“I would take a gun out of the hands of someone on the list if the list is made public,” said Bennett. “People don’t know if they’re on the list.”

Bennett started his answer to the first question by saying he viewed issues through a libertarian lens. He said eroding any liberties is a step on the path to losing other freedoms. He said the Bureau of Alcohol, Tobacco, Firearms and Explosives could get rid of the bump stock used in the October 1 shooting in Las Vegas by rule.

Both Wynes and Shah both said they favored “common sense” gun legislation. Wynes said he would eliminate bump stocks and straw purchasing as well as allowing universal background checks. Shah wants to add the gun show loophole to that list of changes.

In another question related to gun safety, the candidates were asked if they received campaign contributions from the National Rifle Association. They all said no.

On taxes, all three contenders also expressed general agreement with the changes to the Internal Revenue Code signed into law in late December. Wynes, who said the new law helps 80 percent of the people in the district, likes the doubling of the standard deduction and the improved child tax credit.

Bennett said he generally likes the lower rates but has concerns about the elimination of the deductions for state and local taxes because “it affects many of the people in the district.” Shah said the new law will stimulate business.

While both Shah and Wynes favor allowing people brought to the United States from another country when they were children, also known as Dreamers, to remain, Bennett said he has concerns about letting them stay.

“Do we make an exception for one million people who were brought here illegally?” said Bennett. “It should be the same for everyone.”

Both Wynes and Shah said they see mixing border security with issue of Dreamers as the kind of bipartisan compromise that can pass Congress. Their positions on the border wall proposed by President Donald J. Trump are also similar.

“A wall works in some places and in other (spots) we can use technology,” said Wynes.

“A wall along the whole border will be particularly difficult but we can use technology,” added Shah. “The (dreamers) should have permanent status.”

There was agreement between Bennett, Shah and Wynes to use economic sanctions to pressure North Korea to abandon its nuclear weapons program. Bennett said he wants to work with “strategic allies” like South Korea and Japan as well as “strategic enemies” like China to motivate the North Koreans. Wynes takes a longer term view.

“We should strive for the reunification of the Korean peninsula under the government of South Korea,” said Wynes. “That would get rid of the Kim (Jong Un) regime once and for all.”

Other issues discussed were preservation of the Great Lakes, sexual harassment, infrastructure, health care and reproductive rights. Shah and Wynes said they support a women’s right to choose. Bennett said he opposes it.

The winner of the primary will face Rep. Brad Schneider (D-Deerfield) in the November 6 general election. Schneider is unopposed in the Democratic primary.