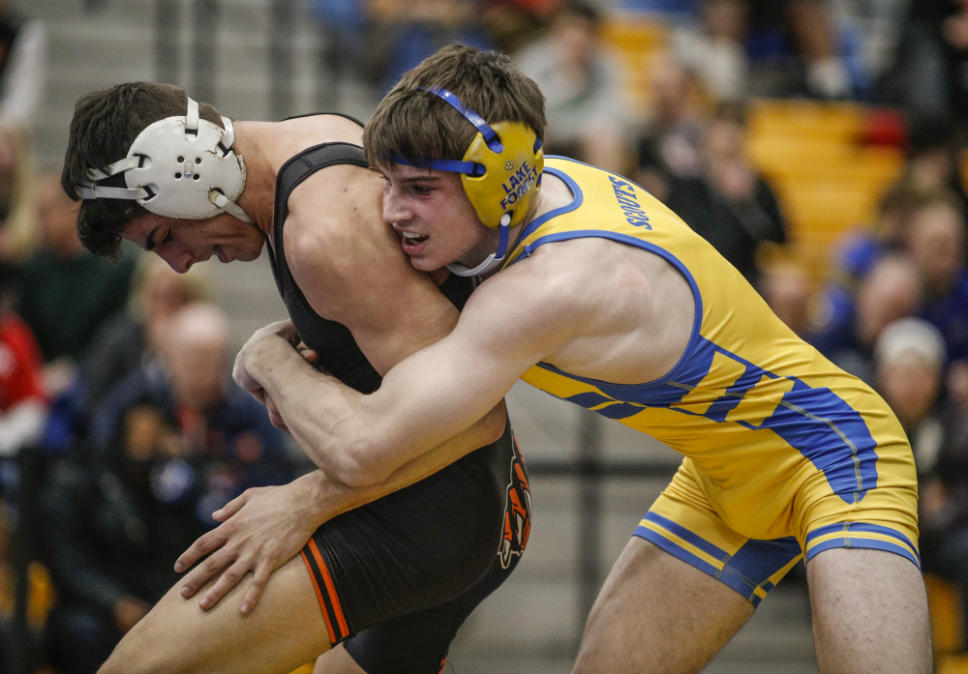 The Salvation Army bell ringer in filmmaker Quinn Dailey’s short comedy, The Donation, gets upset when a teenaged passerby declines to drop a coin in the red kettle. The bell ringer proceeds to haunt the teen, everywhere.

“I thought of the plot while driving by a Walgreens and hearing that bell,” Dailey says. “The bell ringing sounded ominous.”

Dailey, a senior at Lake Forest High School, intends to present the two-minute, 30-second film at the school’s Talent Show later this month and submit it to the Midwest Media Educators Association for Video Festival consideration.

“I wasn’t sure the friend [Jackson Thomas, a 6-foot-1 senior] I had asked to play the bell ringer would be down with playing kind of a creepy, scary character,” Dailey adds. “But he embraced the role, killed it.”

Dailey’s role on wrestling mats at the Class 3A Warren Regional last weekend wasn’t an act. The 132-pounder embraced foes and threw them around. The dry specks of blood covering parts of his nostrils after his championship bout with Libertyville High School sophomore and top-seeded Danny Pucino?

The half-dozen marks of various shapes and hues on Dailey’s face?

Pucino (37-2), fierce and aggressive in six intense minutes, defeated Dailey 21-7 in the final, giving the Wildcat a 3-0 mark against the Scout this winter. Second-seeded Dailey (34-7) received a first-round bye and beat Round Lake’s Zachary McCain 6-1 and Grant’s Dylan Rinkenberger 10-4 before his clash with Pucino.

“I have to become a better chain wrestler.”

Dailey thought this winter would be his last as a competitive wrestler until his parents, Lisette and Kirk, encouraged him to research colleges with competitive academic and wrestling programs last summer. Dailey learned all about New York University.

Dailey contacted the wrestling coach at the private Division III school in New York City and later applied for admission. He got accepted and intends to take liberal studies courses and grapple as a freshman.

“I’m into film, really into it, and the opportunity to direct or do something in the industry after college would be a thrill for me,” says Dailey, who hinted he’d apply to NYU’s Tisch School of the Arts after either his freshman or sophomore year.

“I’m taking a film class now; we’re studying Citizen Kane. It’s an old movie, but it’s fascinating, especially the work of the camera, the shots and the angles. Everything, I’m finding out, has a meaning in that movie.”

The shots Scouts wrestling coach Matt Fiordirosa cares about are the ones Dailey plans to execute atop mats at the Class 3A Barrington Sectional on Feb. 9-10.

“Quinn is a machine, an animal, a workhorse,” Fiordirosa, a former standout wrestler at Grant, says. “He knows two speeds — on, off. There’s nothing in between with him. On mats he doesn’t stop, loves to outwork everybody. And he’s such a strong kid; his six-pack abs aren’t normal ones. He’s been on a tear this season. I watched him compete at two national tournaments (in New York and in Pennsylvania) last summer, and you could see him gain confidence with each match.”

A friend named Chris convinced Dailey to give wrestling a try when both attended Deer Path Middle School. Dailey recorded a takedown for the first time and couldn’t wait to notch his second one.

“That feeling of being in control in a battle was a great one,” says Dailey, who attended five wrestling camps last summer, including one at NYU, after sustaining muscle tears in his neck shortly after the conclusion of his junior season; the injuries sidelined him for six weeks.

“I couldn’t get enough of that takedown feeling,” adds the former soccer player. “Wrestling has made me a better athlete. It has taught me the value of hard work, dedication and commitment. My dad has noticed wrestling has helped me build character.”

His mother, a native of New Jersey, competed at the national level as a figure skater. Lisette Dailey initially had a problem with Quinn and his passion for wrestling.

“My mom,” Dailey says, “didn’t want her baby boy to get hurt. But you should see her at wrestling meets now. She’s totally supportive and really into wrestling these days. If she could start her life all over again, she’d probably pursue some kind of career in professional wrestling.”

She watched her son climb a podium last weekend to receive a medal and pose and smile for cameras and smartphones.

It was an ant-eats-aardvark moment.

A budding director had appeared in the spotlight, in front of lenses.

Highland Park High School: Giants senior Alex Rosenbloom captured the championship at 145 pounds and an automatic sectional berth at the Class 3A Warren Regional in Gurnee last weekend, improving to 30-2 overall with a 3-2 defeat of Warren senior Kelvin Cupay in the final. None of his teammates advanced to this weekend’s Barrington Sectional, with two (senior Martin Melchor, fourth place at 152; senior Sebastian Newman, fourth at 285) falling one win short of a qualifying berth on Feb. 3. 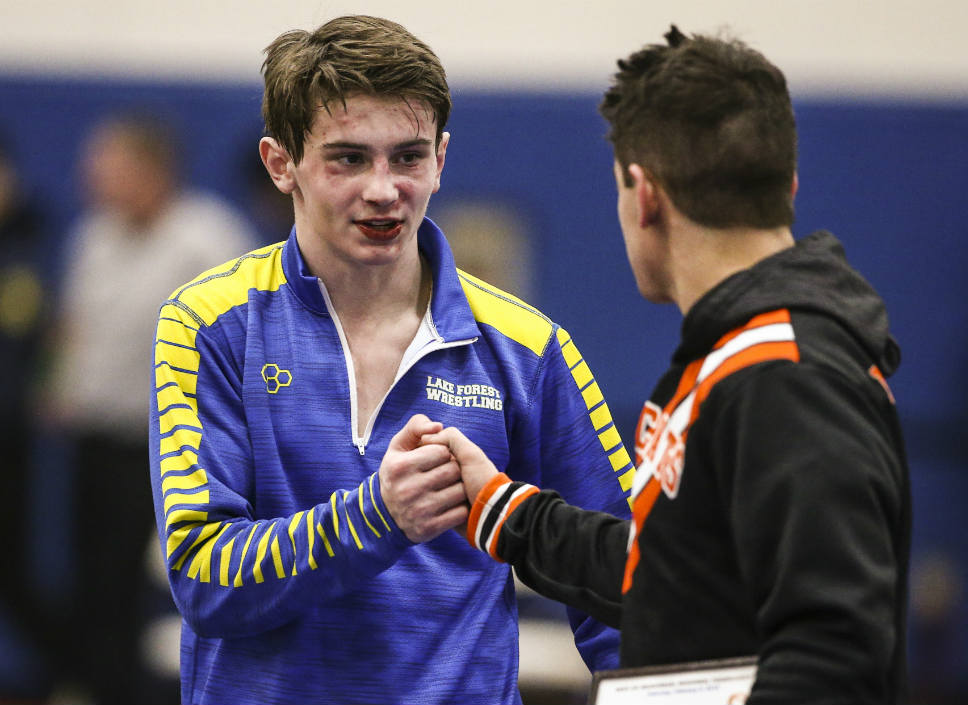