Cupid’s Arrow, it turns out, can point in many directions.

Hopeless romantics looking for a creative alternative to flowers and chocolates this Valentine’s Day might consider scoring two tickets to the Oil Lamp Theater’s production of Neil Simon’s The Last of the Red Hot Lovers.

Set in New York City in the late 1960s, Simon’s play chronicles the escapades of Barney Cashman, a married, overweight, bored,  middle-aged man, looking to experience the sexual revolution before it’s too late.

A successful restaurant owner and family man weary of his predictable, nice-guy life, Barney decides to have an affair. The play follows Barney’s attempts at three illicit seductions, all of which take place in his mother’s small apartment. What follows is a series of comedic errors and miscalculations that make for lively entertainment.

“This is the first time we’ve staged The Last of the Red Hot Lovers,” said Oil Lamp Theater’s executive and artistic director, Keith Gerth. “But we do a fair amount of Neil Simon. He’s probably our most popular playwright.” 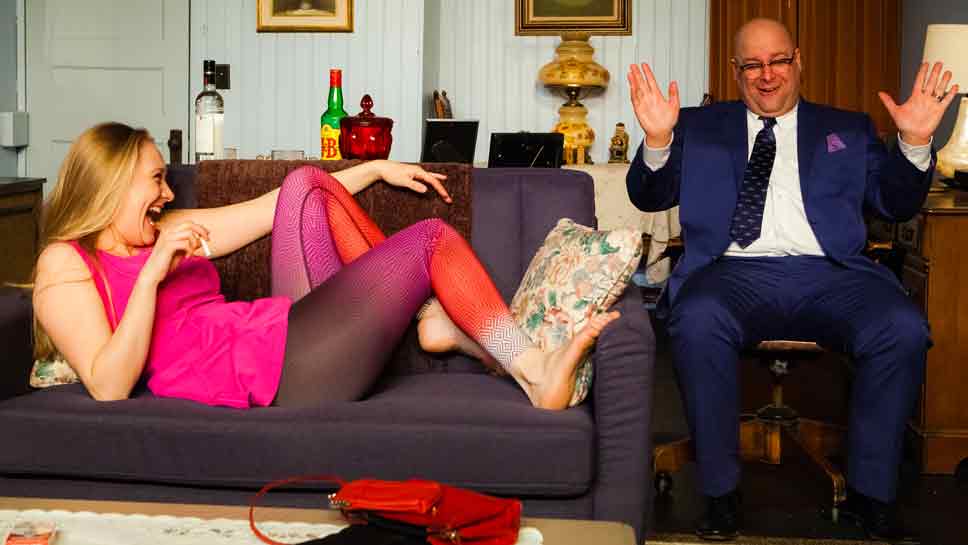 The Oil Lamp Theater is performing Neil Simon’s “Last of the Red Hot Lovers” — just in time for Valentine’s Day.

“There’s an element of redemption in every show we produce,” said Gerth. “We like plays with positive outcomes that make the audience feel there’s hope for humanity.”

The challenge in staging The Last of the Red Hot Lovers, said Gerth, is that Barney, played by actor Dennis Schnell, remains on stage for the show’s entirety.

“You have one actor playing the same character in three scenes with three different women,” said Gerth. “For him it’s a marathon every night.”

Ticket sales for The Last of the Red Hot Lovers have been brisk. The BYOB 60-seat theater has seen both couples and large groups of friends attend the show, which runs 2 hours and 20 minutes including two 10-minute intermissions.

“Our theater is very much a gathering space,” said Gerth. “Since The Last of the Red Hot Lovers is set in the 1960s, we’ve decorated the lobby with lava lamps and beads, and we play ’60s music. You actually feel like you’re in Barney Cashman’s mother’s apartment.”

Around Valentine’s Day, Gerth and his crew mark the occasion with flowers and rose petals in the lobby, but the show goes on as normal.

Gerth reports there’s still ticket availability for the weekend before and after Valentine’s Day, which falls on Wednesday, February 14. Last year at this time, the Oil Lamp Theater produced Neil Simon’s 1963 play Barefoot in the Park, which later became a film starring Jane Fonda and Robert Redford.

“Most of Simon’s plays are relationship driven,” said Gerth. “They lend themselves well to Valentine’s Day.”

Tickets for The Last of the Red Hot Lovers are $35 for adults and $20 for students, and can be purchased online at www.oillamptheater.org.