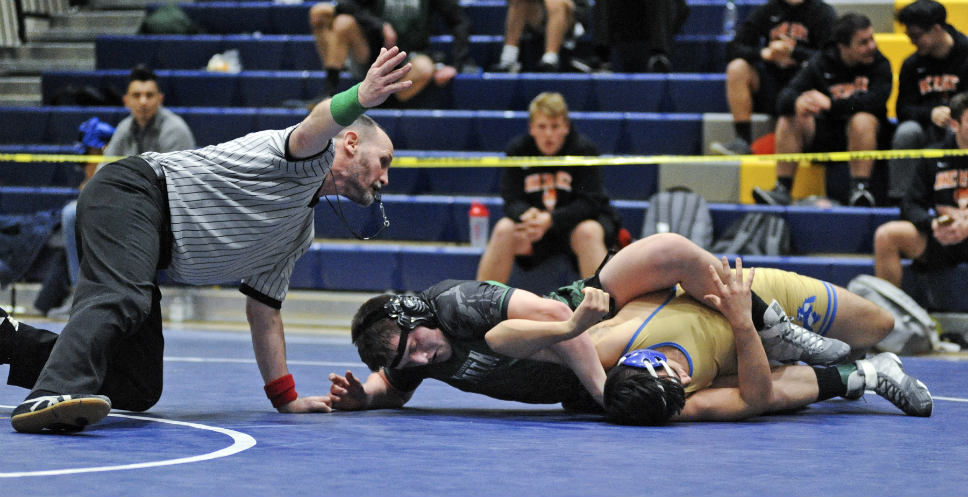 Trent Williams of the Spartans gets in position to pin Wheeling’s Romel Hernandez in the 220-pound final at the Class 3A Glenbrook South Regional on Feb. 3. Williams heads to the sectional with a 33-6 record. PHOTOGRAPHY BY GEORGE PFOERTNER

Minutes before his title match, Trent Williams inserted his ear buds and promptly started boppin’ and noddin’ to the tunes of a popular hip-hopper.

Trent Williams was gettin’ in the mood.

The Glenbrook North wrestler was preppin’ for battle.

He was puttin’ on his grappler face.

While the songs in his “headset” were shuffling through his favorites’ list, Williams started pacing.

It’s what he does.

It’s how he deals.

“I don’t like sitting still [before a match]. I don’t like waiting,” said Williams. “I get antsy.

What awaited Williams in the 220-pound championship match at the Central Suburban League Meet at Maine West High School on Jan. 20 was Evanston’s Ramin Abraham.

The undefeated and super-athletic and highly touted Ramin Abraham.

Williams didn’t flinch against Abraham, a ranked wrestler by Illinois Matmen, in the final.

The GBN junior managed to keep things interesting throughout — scoring on a reversal midway through the second period and coming up with a takedown with 35 seconds left in the third period — before losing the highly contested match 10-8.

Williams was not the only Spartan to advance to the championship bout. He was joined in the spotlight by junior Cam Casey.

Casey, who is now a 31-match winner, gave it his best shot before falling to Maine South standout John Halvorsen by a major decision.

Like Abraham, Halvorsen entered the league meet as a ranked wrestler.

“I know that they [Williams and Casey] aren’t happy with their outcomes,” said GBN assistant coach Blake Tomczak.

But what Williams and Casey accomplished went a long way in helping GBN to a solid fifth-place finish in the team standings (162 points).

Meanwhile, moments after standing on the podium and receiving his second-place medal, Williams talked it up with a couple of sportswriters.

He made an impression.

He made an indentation.

And he’s got this: a very firm handshake.

Which brings us to this: wrestling has an indelible hold on Williams.

He’s undeniably gripped by the sport.

“Wrestling? I love it now,” said Williams. “I love the accountability. Win or lose, it’s all on you. You can’t blame anyone but yourself.”

He went out for the team at the urging of his dad, Scott, who works in the social studies department and coaches freshman football at the school.

“I didn’t start wrestling until freshman year,” said Williams, a two-way lineman for the GBN football team. “I heard it was good for football.

“And it has been,” he added. “It’s helped my hand fighting [in the trenches]. And it’s helped my mentality. It’s made me mentally tougher.”

By winning his first two matches at the CSL Meet — pins against Glenbrook South’s Jesse Quijada (3:15) and Highland Park’s Tate Ellis (3:21) — Williams joined the 30-win club. He’ll take a gaudy 30-6 record into the upcoming Class 3A regional at Glenbrook South on Feb. 3.

“His 30 wins might have exceeded some people’s expectations,” said GBN assistant coach Blake Tomczak. “But not his own. Trent holds a pretty high bar for himself.”

The cerebral Williams, who plans to study math and science in college, knows how to game plan and set up opponents.

“He’s real good at making adjustments,” said Tomczak. “Trent put in the time in the offseason, and it’s really paying dividends for him.”

The Titans ended the CSL Meet in 10th place with 45 points.

Senior Sean Cloherty was one of the standouts for Loyola Academy at the Chicago Catholic League Championships at Mt. Carmel on Jan. 19-20.

McKeag pinned Providence Catholic’s Matt Pirc in the 132-pound fifth-place match to earn his 30th win of the season (30-12).

The Ramblers finished ninth in the 17-team tourney with 53 points. Montini Catholic took first with 344 ½ points.