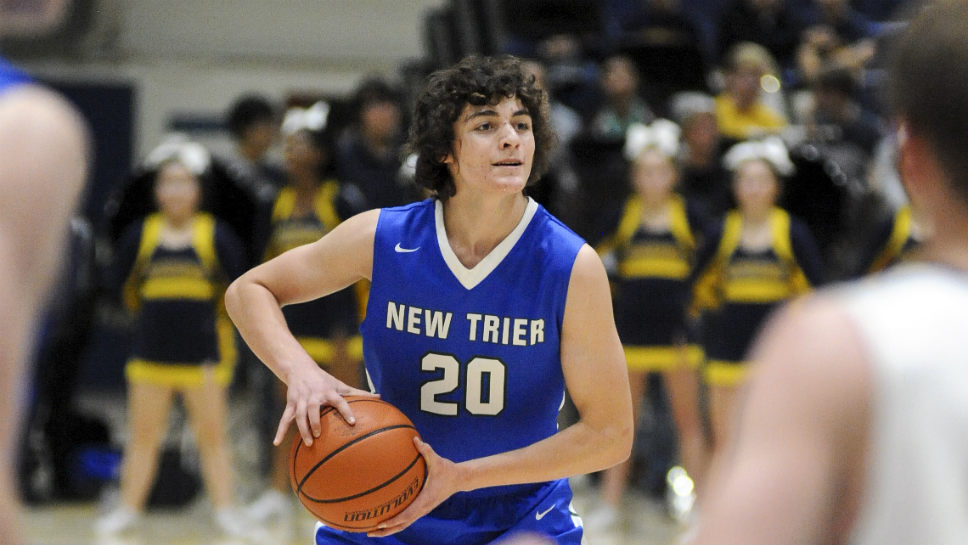 Sam Silverstein, seen here in a game at Glenbrook South in December, turned in another strong effort in New Trier’s win over GBS on Feb. 1. PHOTOGRAPHY BY GEORGE PFOERTNER

Lost in the shuffle?

With all of the veteran talent on the New Trier boys basketball team, it’s not easy for a “newcomer “ to stick out.

But Sam Silverstein is finding a way.

The 6-foot-4 junior guard/forward continues to make starts and command extended playing time for the Trevians, who raised their record to 19-3 on Feb. 2 by downing visiting Glenbrook South 51-35.

Silverstein, meanwhile, shuffled up and down the court doing all kinds of “good stuff.” He ended up with five points, six rebounds, three assists and two steals.

“I love him,” the coach added. “He’s going to be a heckuva player for us.”

With recent illnesses to Boehm and Ciaran Brayboy, Silverstein has received some golden opportunities. He not only has stepped in — but he’s also stepped up.

In NT’s 62-48 win over St. Viator in a War on the Shore game at Loyola Academy, Silverstein helped the Trevians’ cause in a big way: 11 points, six rebounds and two assists.

Meanwhile, NT’s “player of the game” against Glenbrook South was Kirkpatrick. Starting with a hot first quarter — two fast-break layups and a long three-pointer — he definitely was on his game.

“He doesn’t need to score a point [to influence the outcome of a game],” said Fricke.

Like Kirkpatrick, Ryan shot out to a great start. He hit his first five shots of the contest.

Ryan and Kirkpatrick were right smack in the middle — scoring two baskets each — of NT’s 8-0 run late in the third quarter.

In fact, the Titans (7-14, 0-8) would be hard-pressed to play any better than they did in those eight minutes, when they outscored the hosts 18-10.

GBS sophomore forward Dominick Martinelli made some sparkling plays, tallying eight of 12 points in that frame.

“Yeah, we had a great second quarter,” said GBS head coach Phil Ralston. “But when you score only 11 points in a half, you’re not going to beat many teams.”

Ralston downplayed it — but a key point in the game came when the officials took points away from Martinelli.

With just over four minutes left to play in the third quarter — and GBS trailing by four points, 28-24 — Martinelli rebounded a missed three-point shot attempt by teammate Jimmy McMahon. As he was falling to the floor, Martinelli flipped up a circus-type shot. It went in. But the officials waved it off.

One of the defensive plays of the game happened on the second possession of the second half, when GBS’s Gavin Morse flew across the lane, leaped up and blocked a left-handed layup attempt by Kirkpatrick.

Unfazed, Kirkpatrick rallied back from that play a few minutes later, by putting together an impressive sequence: converting a baseline drive and a 14-foot floater down the lane on back-to-back plays.

Player of the Game: Kirkpatrick