Between the two shows, Emmett sold 67 giclee prints and canvas reproductions of his bright, whimsical paintings, making his debut art show – by all industry standards – a resounding success. But what made Emmett’s event so extraordinary was not the number of paintings he sold, or the buzz of the crowd. It was the fact that Emmett Wilson is only 12 years old. And he has Down syndrome.

What’s more, Emmett donated the bulk of the proceeds from his show to charity, giving $2,000 to The Needy Family Fund at Our Lady of Perpetual Help Church, and more than $6,000 to the National Association for Down Syndrome (NADS), a non-profit the Wilsons have regularly tapped for support and guidance over the past decade.

“Emmett is making a name for himself, and his artwork speaks for itself,” said his aunt, Glenview resident and former daytime soap As the World Turns actress Kelley Menighan. “He’s proof there’s nothing you can’t do.”

From the time his parents, Paul Wilson and Kathy Menighan Wilson, first put a brush in his hand at age 4, Emmett has painted almost daily in the small art studio the Wilsons installed inside their Glenview home, working spontaneously in short, 20-minute bursts while listening and dancing to his favorite music. With no formal training or direct input from parents or teachers, Emmett’s talent is innate; he paints with no preconceived notions of artistic form or function.

“There’s a purity of expression,” said Paul. “Emmett has no ego. He just paints from his heart.” 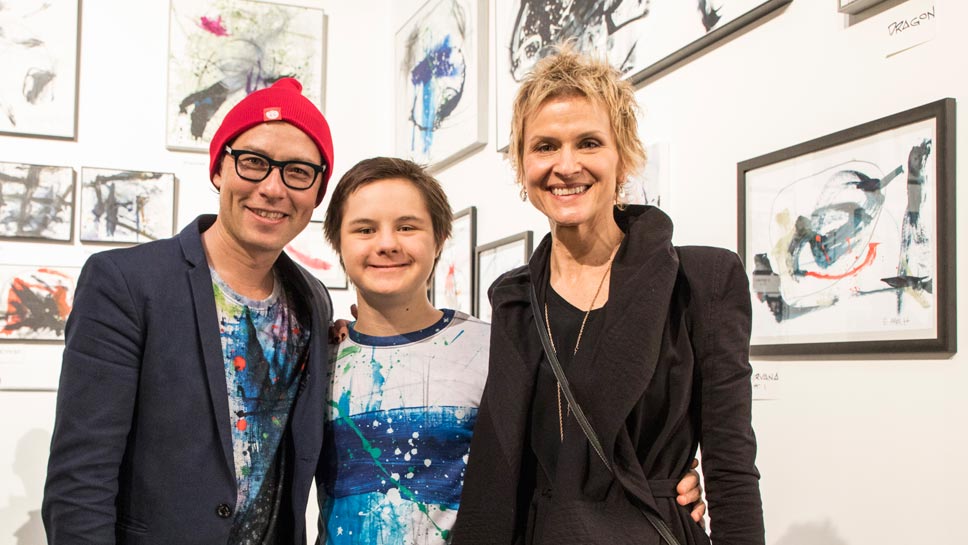 Emmett Emmett Kyoshi Wilson with his parents, Paul Wilson and Kathy Menighan Wilson, at the opening his recent show, “My Paint”, at 10TwelveStudio in Glenview. PHOTOGRAPHY BY JOEL LERNER/JWC MEDIA. 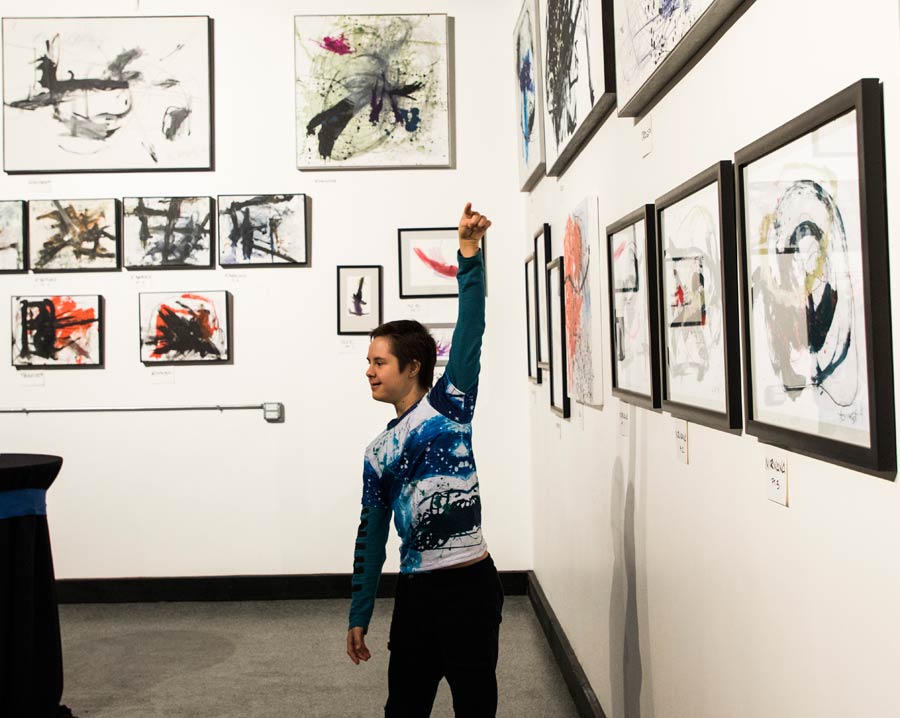 Emmett with several of his paintings.

Over the past 8 years, Emmett has amassed a large collection of paintings, many created as gifts for his parents, we well as the extended family and close friends who form his inner circle of loyal fans.

“We’ve loved everything he’s ever done, but this is the first time we’ve ever put it all together in one show,” said Kathy.

Emmett also collaborated with the Chicago-based artist Matthew Hoffman, known for his “You Are Beautiful” art installations around the city. At the Glenview show, Emmett’s parents raffled off a large “You Are Beautiful” piece of wall art bearing his signature brush strokes, raising an additional $1,500 for NADS.

After years of hearing praise for Emmett’s work, the Wilsons recently created the website emmettkyoshiart.com, and began selling reproductions of his paintings online. A large Emmett Kyoshi Wilson canvas reproduction typically sells for $250; a giclee print goes for $215.

“We’re saving the originals for a museum exhibit one day,” said Emmett’s aunt Kelley. “And truth be told, my sister just can’t bear to part with any of his original work.”

Currently a 6th grader at Springman Middle School in Glenview, Emmett will receive state-funded educational services until the age of 22. His parents hope the continued sale of his art will help support him in adulthood.

“Our goal is to create a business he’ll have forever,” said Kathy. “We want him to work and be part of the community in a field where he excels.”

Emmett was diagnosed with Down syndrome five days after his birth. While still in the hospital, the Wilsons christened their son with the middle name, “Kyoshi,” meaning “teacher” in Japanese.

“At the time, we said to ourselves, ‘he is going to teach us and we are going to be the students,’” said Kathy. “And that’s exactly what he’s done. Emmett is showing the world that everyone has an ability, this just happens to be his.” 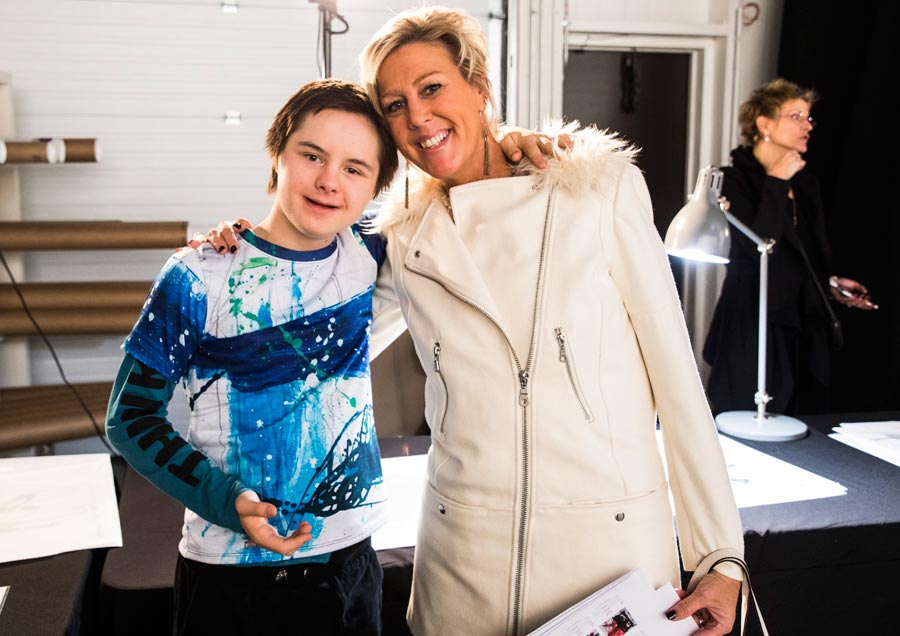 Emmett with his teacher for past three years, Alisa Gary. PHOTOGRAPHY BY JOEL LERNER/JWC MEDIA 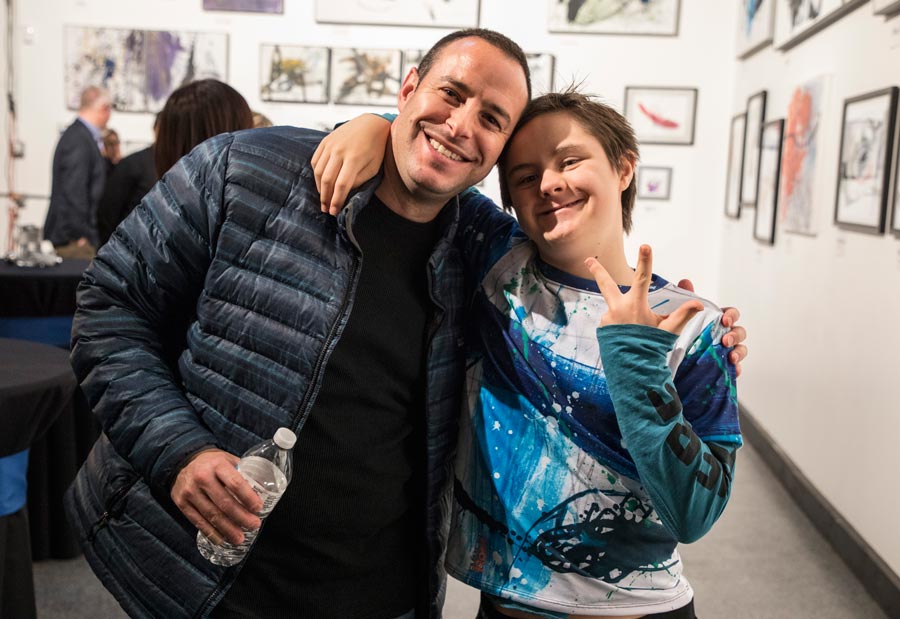 Emmett with Judd Hirschfeld, his 3rd Grade teacher at Pleasant Ridge, who came to the opening of his exhibit. PHOTOGRAPHY BY JOEL LERNER/JWC MEDIA