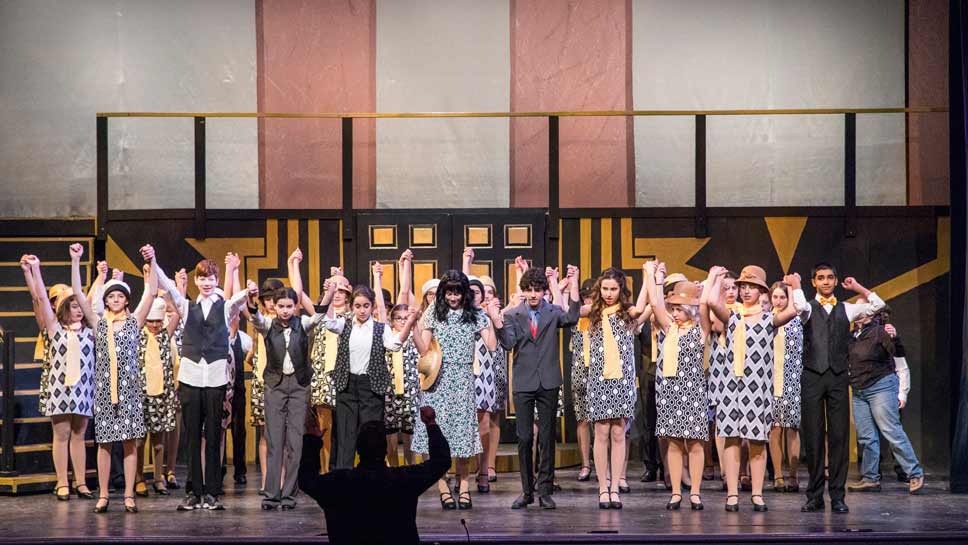 The cast of Throughly Modern Millie during dress rehearsal at Central School in Glencoe. PHOTOGRAPHY BY JOEL LERNER/JWC MEDIA

GLENCOE – No doubt audiences will enjoy the Glencoe Junior High Project’s presentation of Thoroughly Modern Millie, a musical comedy about the roaring 1920s, which opened January 25, but few may appreciate all of the backstage work required to put on a show of such magnitude.

A crew of 23 students in grades sixth through eighth, led by husband and wife team Donna and Mark Price, have been hard at work since October preparing the sets. “The kids really are a major part of the whole process,” Donna said.

Likewise, Melissa Estes, head of costumes, shopped thrift stores and altered clothes to create more than 130 costumes for the show. She also paid attention to the details to coordinate the costumes with the sets. “I enjoyed collaborating with the director to connect the costumes to the world of the play visually, for example, connecting the color scheme and the art deco looking prints in the opening number to the set design,” Estes said.

The set includes a hotel backdrop, which is the main scene for a show that takes place in New York City in the height of the Jazz Age. It’s about a small-town girl named Millie Dillmount who moves to the big city to marry for money instead of love.

The crew met once a week after school and on Sunday mornings, learning how to use hammers, saws and drills, as well as some painting and assembly, to build the sets for the show. Together, the Prices taught the students how to work with their hands to create a magical scene on stage, drawing on years of experience working in community theater on the North Shore. The Prices have been running the crew program for seven years at the Glencoe Junior High Project. Director Adam Busch asked the them to join him after working with them on previous community theater shows.

In August and September Donna met with Busch to talk about ideas for the sets, and then she put together an elaborate design, keeping in mind factors such as the number of actors on stage. This year, because there could be up to 40 kids on stage in any given scene, Donna put in levels in the background to ensure all of the actors are visible to the audience during the performance. She also designed a retracting staircase, to create room for all of the actors on stage.

“I love the creative aspect and I like to design and see my paper drawings come to life. It’s just a lot of fun,” Donna said.

Likewise, Mark shares his handiwork and expertise. “I just love tools of any kind and building things with my hands,” Mark said.

While the finishing touches were completed the day before opening, the students’ work is far from complete. During the show, the crew is organized into groups that manage tasks such as lighting, curtains, props and sound — all of the important backstage work that supports a production.

“Nobody is just sitting around. Everybody has a job,” Donna explained.

Although many of the crew members begin the season believing that the actors on stage are the most important part of the show, by the time the show is up and running they understand the invaluable role of the backstage crew. “The kids learn that the backstage part is as much a part of the production,” Donna said. 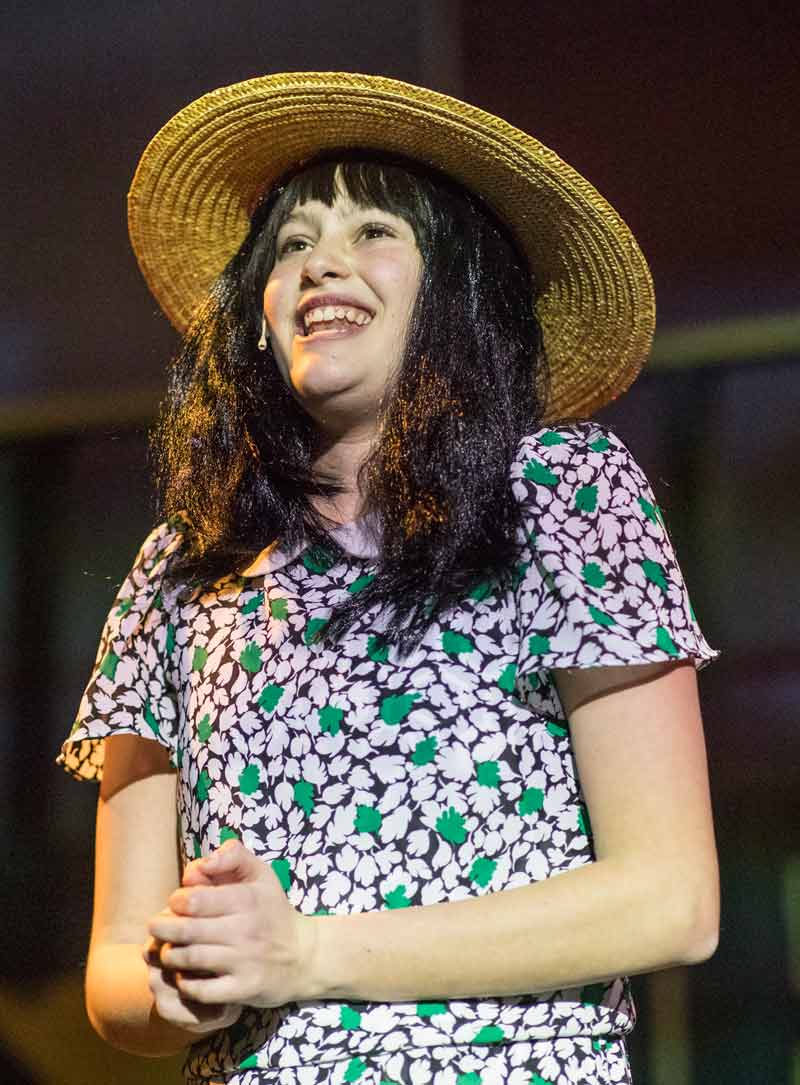 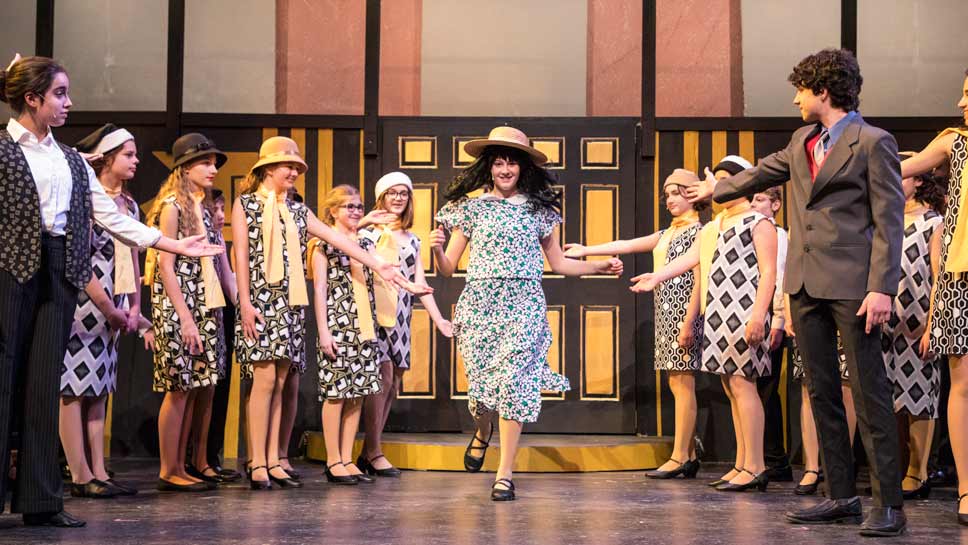 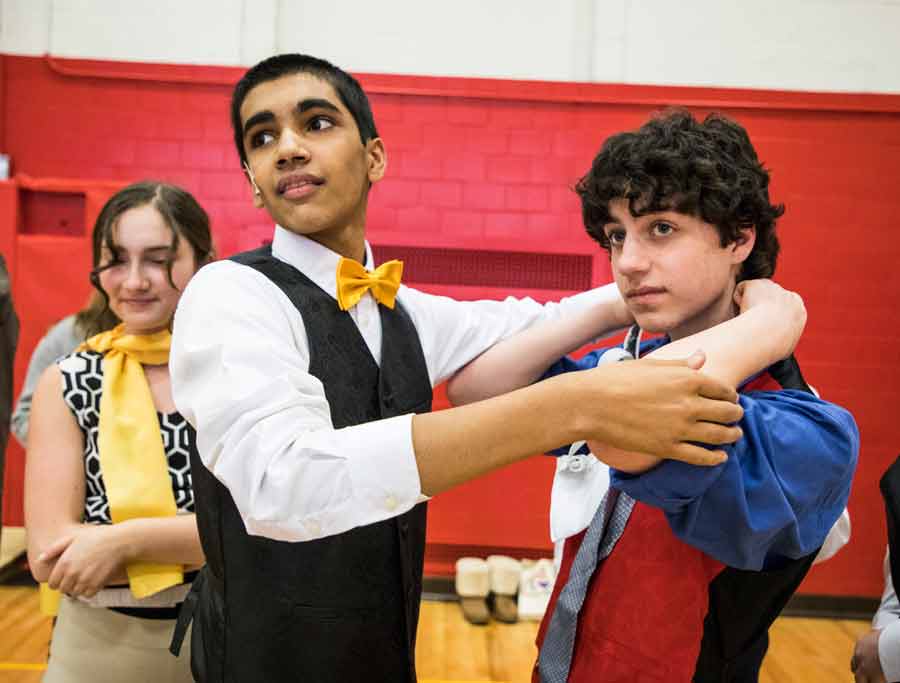 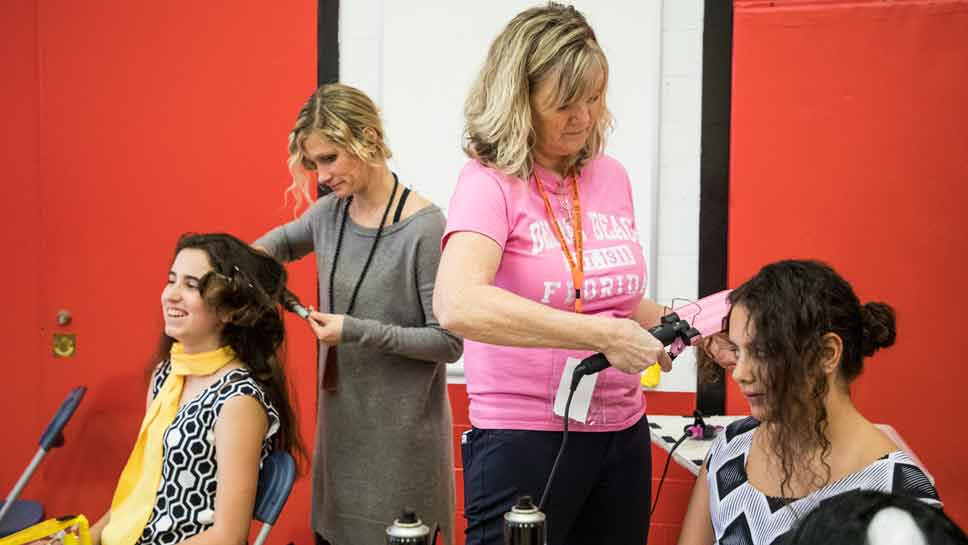 Four performances of Thoroughly Modern Millie will be held in Central School’s Misner Auditorium, 620 Greenwood Ave, Glencoe on January 25 at 7 p.m., January 26 at 7 p.m., January 27 at 3 p.m. and January 28 at 1 p.m. Tickets are $18 a piece and can be purchased at the door or at www.gjhp.org. The production serves as a major fundraising event in support of the Glencoe Junior High Project.