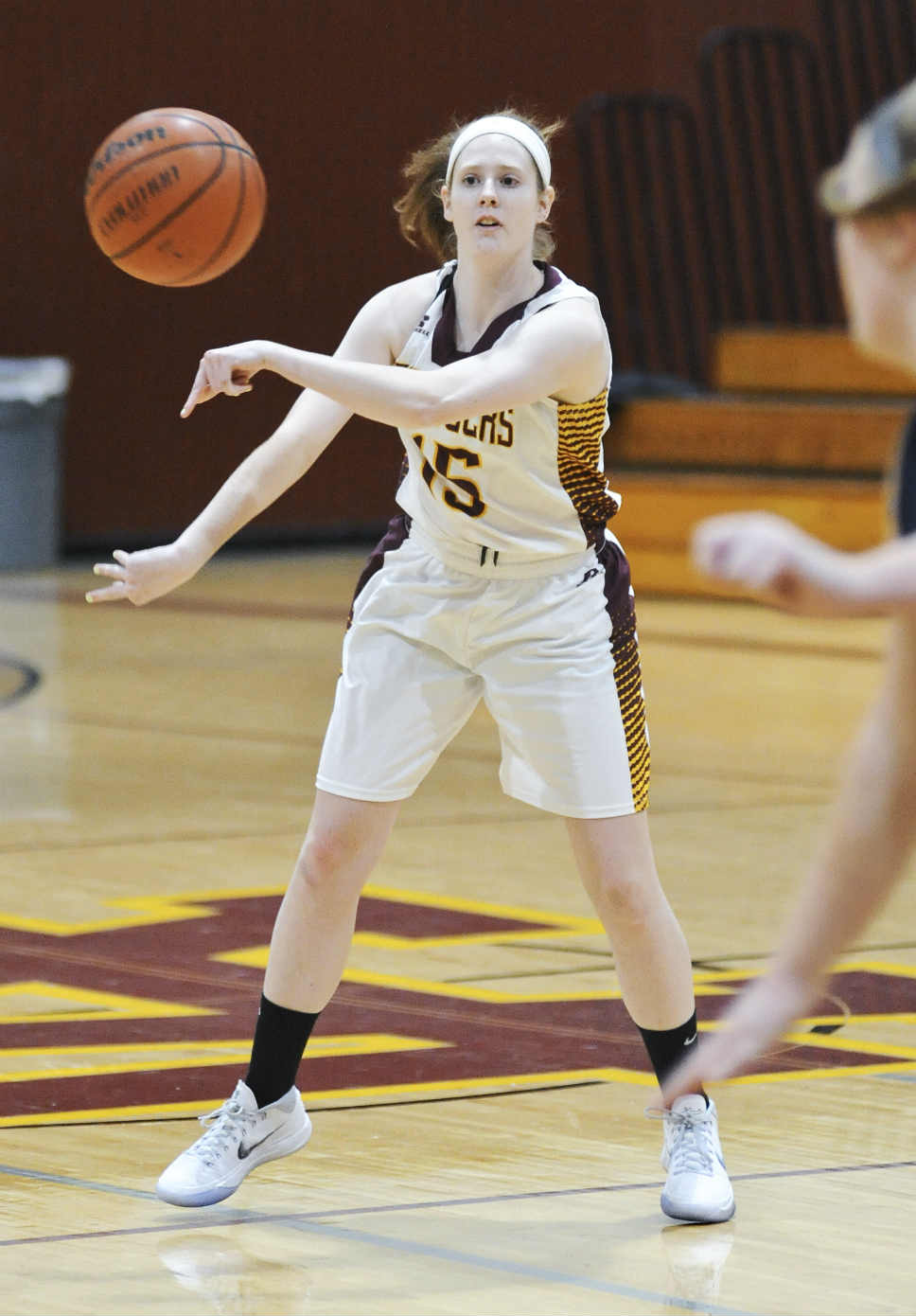 Adie Morrill, the defensive ace for the Loyola Academy girls basketball team, arguably made the offensive play of the game in her team’s come-from-behind win over visiting Mother McAuley.

Early in the second quarter, Morrill, who will play basketball at John Carroll University next season, corralled a long rebound, raced down court and converted a three-point.

The play went a long way in igniting the Ramblers, who overcame a tough first half and ended up beating the Mighty Macs 41-36 in a key GCAC contest on Jan. 16.

“That play [by Morrill] gave us a boost,” said LA head coach Jeremy Schoenecker. “She committed herself to it.”

Morrill has offensive skills. But her role has been specifically defined for her — by the LA coaching staff.

“Every year, we designate someone on our team to be the defensive stopper. She’s it,” said Schoenecker. “It was Madison Kane last year. She’s our Madison Kane this year.”

That three-pointer was Morrill’s sum total for the game. She took just two shots.

But, on the defensive end, the quick-footed Morrill stood out. Mother McAuley standout Tara O’Malley, who scored only four points in the second half, was limited to nine points.

Morrill had plenty of defensive help — especially in quarters three and four.

“At halftime, we talked about doing a better job of communicating on defense,” Schoenecker said.

After trailing 24-18 at the intermission, Loyola stepped it up on the defensive end. Sparked by Morrill’s big play, the Ramblers went on an 11-0 run in the third period.

Then, they took even stronger control of the game by scoring the first six points of the fourth quarter on a three-pointer by Erin Dillon, a driving layup by Lilly Wehman and a free throw by Julia Martinez.

The second half also featured some solid play from Isabella Ogliore. The LA freshman made a great second-effort play to score off a rebound with 1:36 left in the game.

“Isabella is a tough kid,” said Schoenecker. “The way she worked and scored off that rebound was crazy. I love her toughness and physicality.”

Ogliore (6 points) also scored a difficult layup off a feed from Martinez midway through the third quarter.

“She had a little bit of a weird angle on that play but still scored,” Schoenecker said. “That’s what she brings to our team.”

Martinez led the Ramblers with another double double (12 points, 10 rebounds) to go along with four assists.

Dillon knocked down three three-pointers to finish with nine points.

Player of the Game: Martinez

Notable: It’s been a tough schedule of late for Loyola Academy. The Ramblers earned notable wins over Mother McAuley, Geneva (last year’s Class 4A state champs) and Fenwick, while they sustained losses against highly touted Evanston and Montini (ranked No. 1 in the state). “The kids love the competition. I love the competition,” said LA head coach Jeremy Schoenecker. “It will benefit us [in the state playoffs]. We’ll be battled tested.”