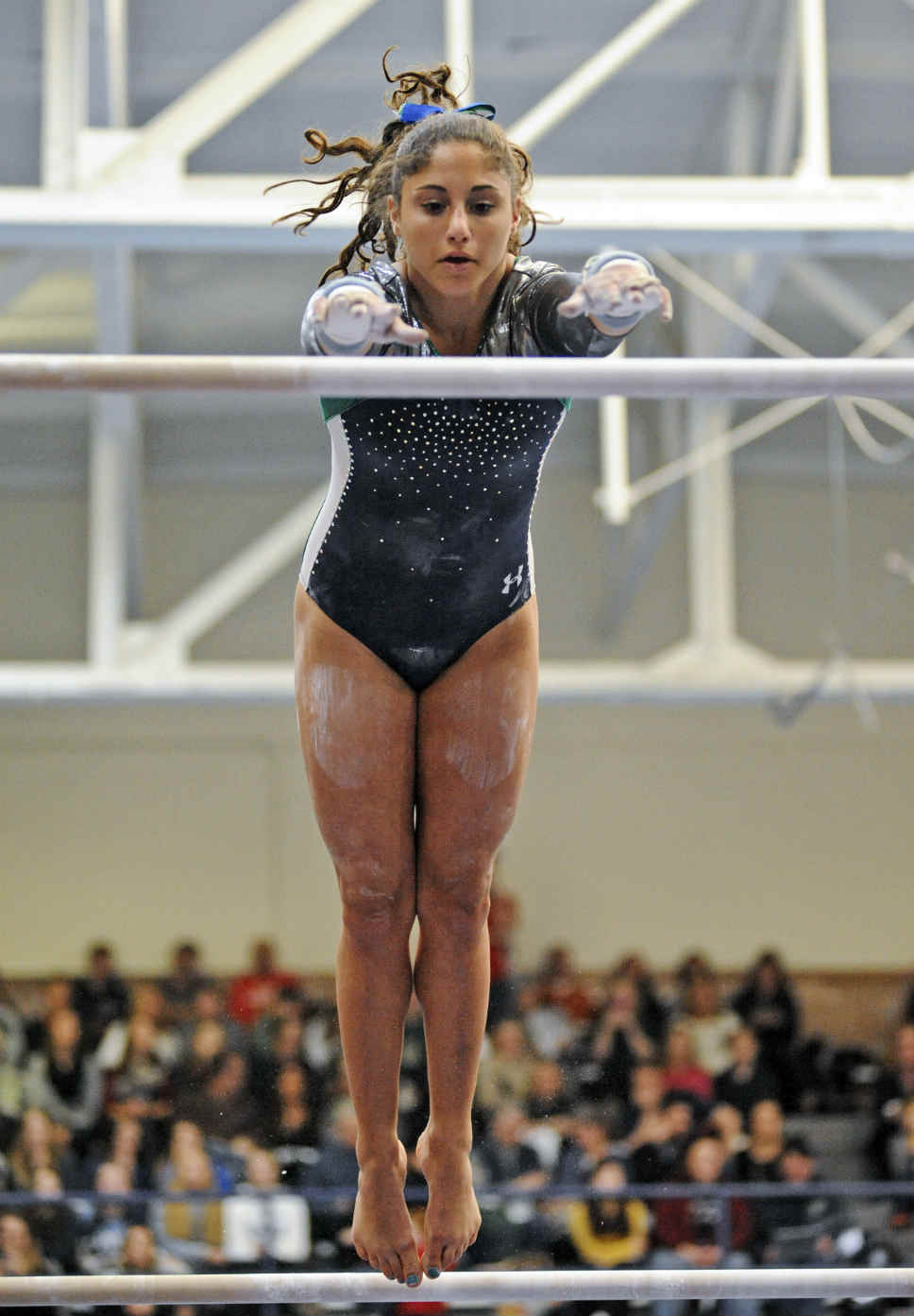 Blocking out the noise in the middle of a routine is almost as crucial to a gymnast as executing a tricky routine.

“I love the atmosphere at meets like this,” Barkal said at the 14-team Evanston Invitational on Jan. 6, in a cozy gym slightly more spacious than that of a walk-in closet.

“That’s the best, hearing your teammates pull for you, shout for you,” added Barkal, a club-only competitor at Glenview-based Dreams Gymnastics in 2015 and 2016 before joining American Academy of Gymnastics in Wheeling last fall.

American Academy veterans described the radically different nature of high school meets compared to club gatherings to Barkal. But hearing about the elements vs. experiencing them?

Barkal, of Glencoe, is one of the Trevians’ four first-time varsity members; the others are freshmen.

No wonder New Trier girls gymnastics coach Jennifer Pistorius enthusiastically welcomed the opportunity to allow an NT cheerleading squad to practice near NT’s gymnasts on the eve the Evanston Invite on Jan. 5.

An issue with the cheerleaders’ practice space forced the squad to look elsewhere for its session.

“I told the cheerleaders, ‘Come on in,’ ” Pistorius said. “We need you. We need the distraction.’

“Dealing with the distraction,” the coach added, “helped us prepare for a loud meet like this.”

Barkal, a level 9 gymnast, competed only one event (uneven bars) last weekend because she was coming off a week-plus vacation with her family and a sinus infection. Pistorius needed 34 seconds, give or take a second, from Barkal.

Barkal responded with an eighth-place score of 9.075.

“Awesome; Darcy is awesome,” said Pistorius, whose crew won the invite with a 147.125-point total, comfortably ahead of runner-up Maine South’s 144.625. “She does whatever we ask her to do. She has finesse and strength. Her form? It’s impeccable. She’s outstanding on vault, and her bars routine is tight because her technique is so good.”

Two years ago, at a club meet, Barkal competed a Yurchenko layout vault for the first time. Upon landing, she heard a faint crack right above her right ankle.

“I thought I had sprained it,” she recalls.

Barkal returned to the start of the runway for her second vault that day. She then sprinted, did a round-off onto the springboard, flew above and beyond the apparatus and, upon landing, heard … another crack.

This one was louder than the first.

Barkal had suffered a broken tibia. A cast became a regular part of her wardrobe for three to four months. Rehab and time away from the mats tested her. So did another injury — a stress fracture in her back.

“I wasn’t sure, at that point, about continuing in gymnastics,” Barkal said.

But she healed and resumed throwing high-level routines. Pistorius got wind of Barkal’s intent to give high school gymnastics a try from a coach/friend of hers at Dreams. Pistorius later met with Barkal’s mother, Debbie, at a Starbucks to discuss team rules, expectations, etc.

Darcy Barkal competed a Yurchenko layout vault for the first time since the leg break at a high school meet last month. The only sound she heard upon landing it was the collective reaction of her teammates. The decibel level ranked somewhere between jet-taking-off and deafening.

That happens when you earn a mid-9 score and you’re a brand-new addition to the team.

“I’m never going to forget the cheers and that celebration with my teammates,” Barkal says. “That’s the top highlight of my season.”

With plenty of season left, including the big state-series meets in late January and the first half of February.

“Darcy still comes across as quiet and super serious, kind of shy,” Pistorius said. “But she’s silly deep down; I truly believe that. It’s only a matter of time before she breaks out and shows all of us her silly and fun side when she’s around her teammates.” 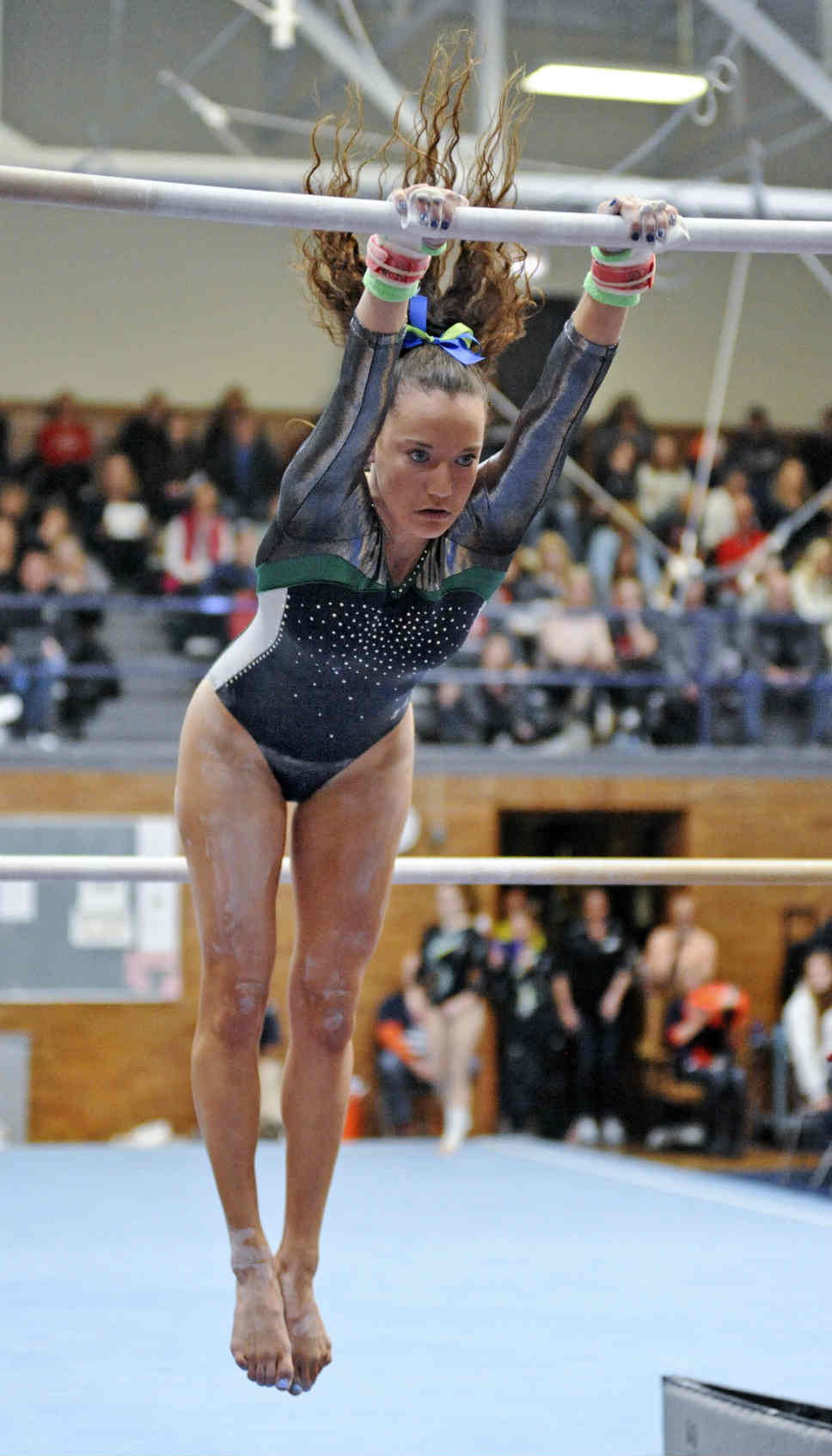 NT’S Maeve Murdock competes on bars at the Evanston Invite. She earned runner-up honors in the all-around. PHOTOGRAPHY BY GEORGE PFOERTNER 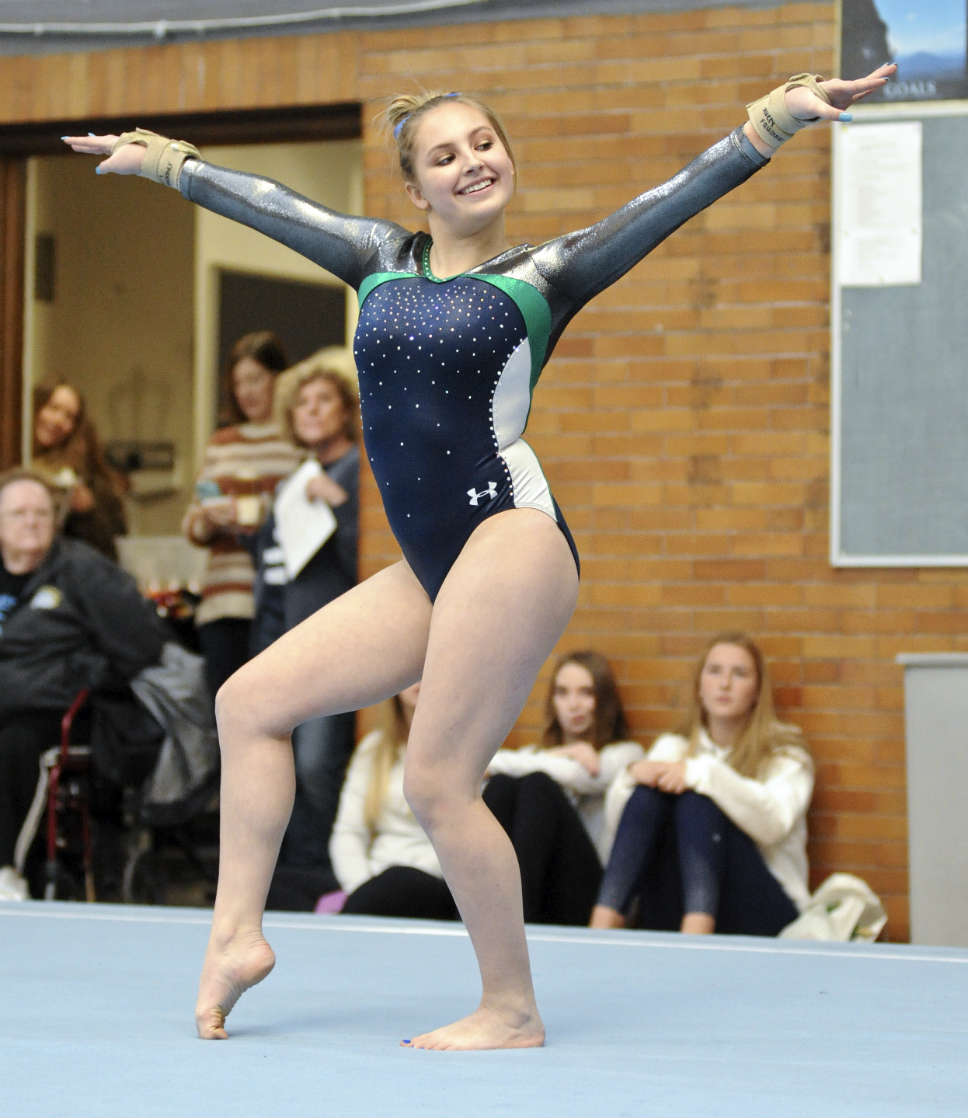 Avery Faulkner of the Trevians performs on the floor exercise at the Evanston Invite. She took fifth in the all-around. PHOTOGRAPHY BY GEORGE PFOERTNER 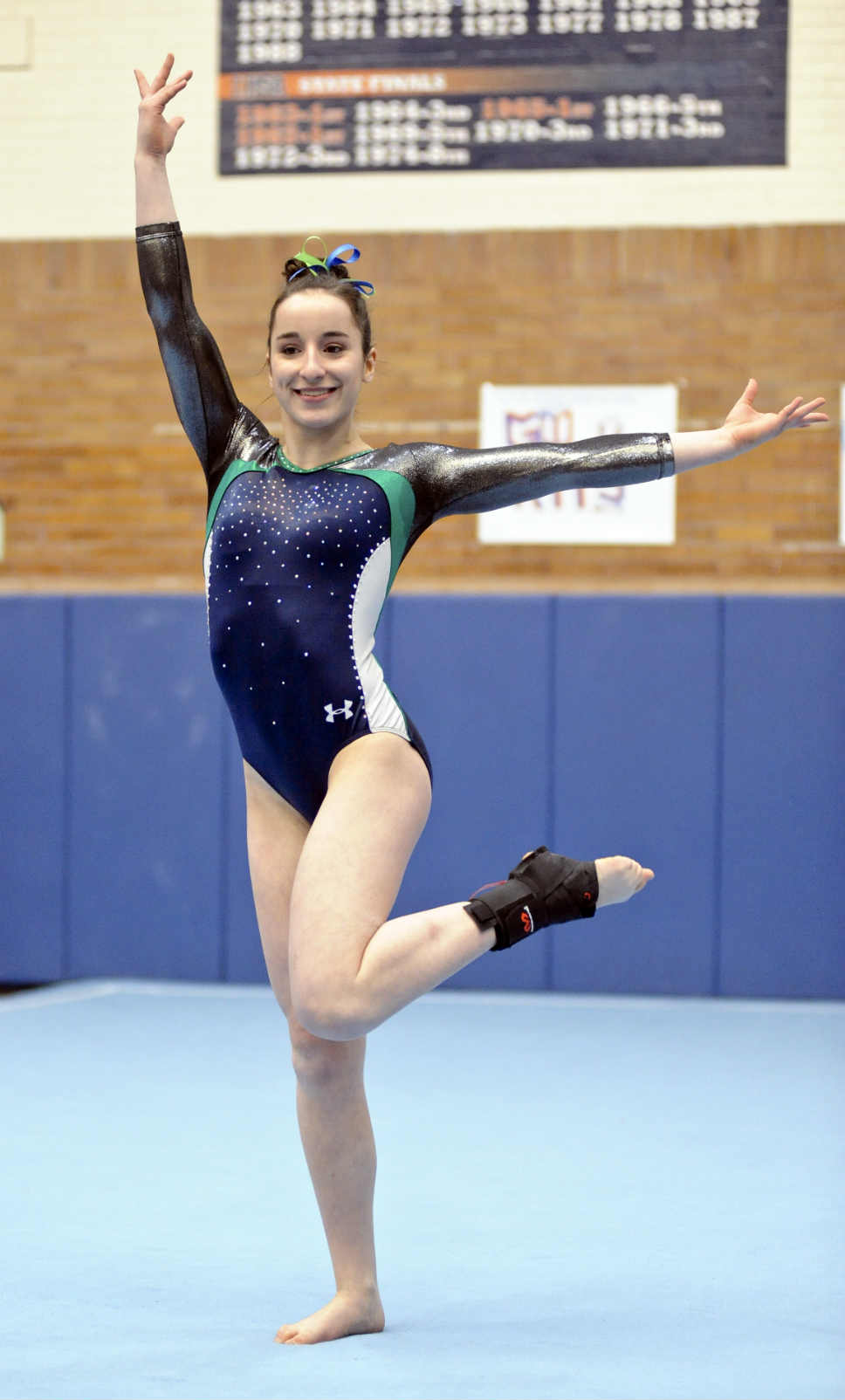 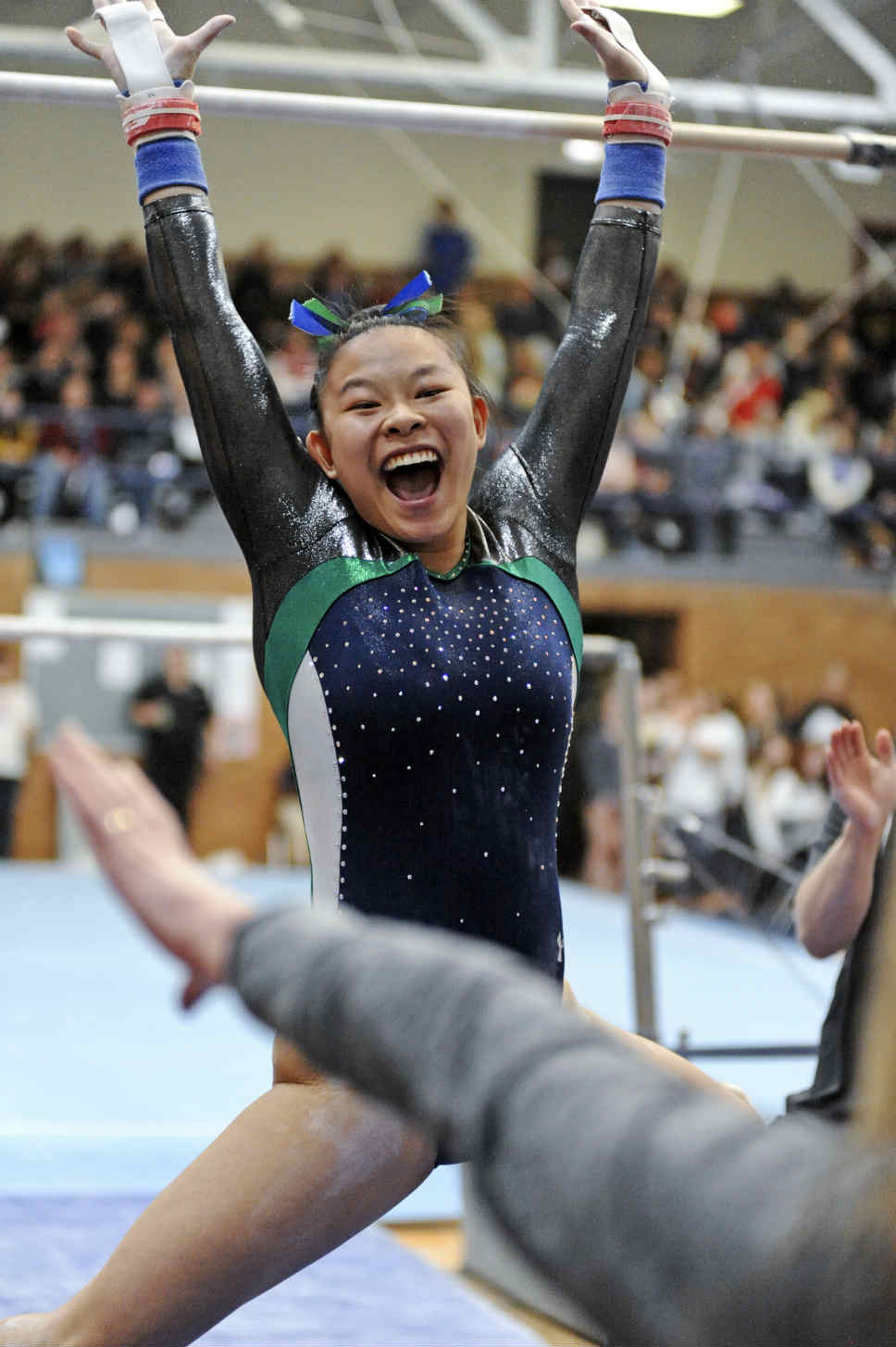