Editor’s note: This story was updated on January 18 to clarify that Artis Senior Living has not yet purchased Wil-Ridge Plaza, pending final permit approvals from the village.

The plan commission meeting scheduled for January 16 was canceled, because a majority of commissioners were unable to attend the meeting, according to a notice posted on the village website. The meeting will be rescheduled some time in February or March.

Affordable housing developer Housing Opportunity Development Corporation (“HODC”), held a community meeting on January 9, in an effort to answer residents’ questions before it presents a revised proposal to the village’s plan commission on January 16, for the site of the former American Legion Post at 1925 Wilmette Avenue.

After receiving input from residents that they would like to see more families in the building, HODC modified its proposal to a family-oriented design that includes 16 units, 10 one-bedrooms and six two-bedroom apartment. The plan still includes 20% set asides for veterans and people with disabilities.

The revised plan no longer includes four additional parking spots located in the adjacent Wil-Ridge Plaza or a proposed service easement across HODC’s property, that HODC had discussed with the plaza’s owners. Artis Senior Living now has plans to develop a memory care facility to replace the strip mall, having just received approval by the village board, and is currently working towards closing on the property.

The change requires HODC to seek zoning relief for parking — there will be 20 parking spaces — as well as a new turn around area in front of the building for service vehicles. 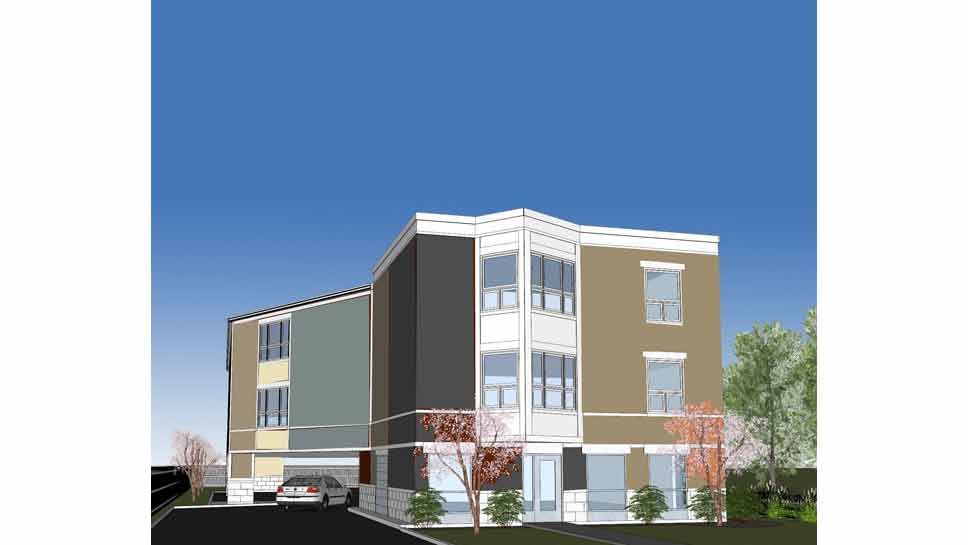 A drawing of the proposed affordable housing development in Wilmette.

At the community meeting, Richard Koenig, HODC’s executive director, explained some of the ins and outs of affordable housing, as well as answered individual resident’s concerns. Koenig explained that affordable housing means the apartments will be rented at below market — $600 for one-bedroom and $800 for  two-bedroom apartments — and will require an income threshold for tenants that they earn no more than $30,000 for a single person, or $38,000 for a four-person household.

“The goal is to provide a different alternative to housing in Wilmette,” Koenig said.

Other residents expressed concerns about HODC’s management of the facility, pointing to a problem SRO building in downtown Evanston HODC owns and manages. “That particular building we’ve had a lot of growing pains. It is very different than our other buildings,” Koenig said. While Koenig acknowledged that the Evanston building had been problematic, he reassured residents that HODC had improved its practices by hiring professional management staff and would be a good neighbor.

HODC’s original proposal drew criticism from Wilmette residents, prompting it to withdraw its proposal and revise its plans for a more family-oriented apartment building. Koenig noted that some residents still view the new plan with skepticism, but he hopes to win them over. “We are adding change to a community and change is very difficult,” Koenig said.

But for residents who are hopeful that the affordable housing plan will be approved, Koenig still faces the hurdle of securing funding for the project. Koenig noted it can take several years to get funding, and predicts an opening in 2020, if all goes smoothly.