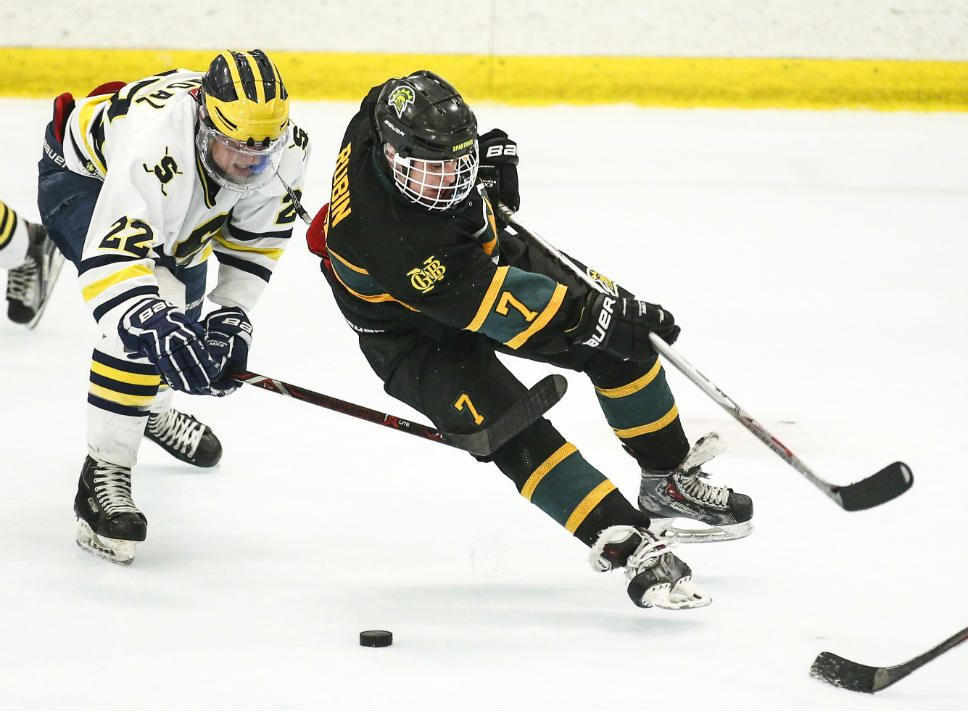 Talk to anybody who witnessed “The David Rubin Game” in September, and you’ll get — guaranteed — an off-ice hat trick consisting of a smile, a look of awe and a shake of the head.

Rubin, a Glenbrook North senior winger and captain, and his Spartans trailed Glenbrook South 4-0 after two periods of a hockey game at Center Ice of DuPage in Glen Ellyn.

North struck for five consecutive goals in the third period, with all of them coming off the stick belonging to the 5-foot-8, 160-pound Rubin.

A flurry of goals in a 17-minute period doesn’t get much flurrier than that.

Only 28 seconds separated his third and fourth goals on Sept. 10.

“David has every skill you’d ever need to be considered a great hockey player,” GBN senior center and Rubin linemate Jacob Crane says. “He also has that mentality, that hates-to-lose mindset. He plays with ferocity, with intensity, with a willingness to do anything to help our team win.”

Glenbrook North and Glenbrook South ended up needing overtime to decide the “The David Rubin Game”. Rubin didn’t score the game-winner in the 6-5 victory, but he did get an assist (as did Crane) on Michael Day’s clincher at 9:21 of the extra session.

“I had help, plenty of help, on those goals,” says Rubin, also an infielder and pitcher for Glenbrook North’s baseball team. “My teammates made great passes; my teammates started most of those goals. I love the team aspect of hockey, everybody coming together as a team. There’s nothing better than coming off the ice with your teammates after a big win.”

There’s not a better high school hockey player in the state of Illinois than Rubin, insists Spartans coach Evan Poulakidas. Rubin had scored 57 goals and assisted on 39 others for a 40-13-3 squad through Jan. 9.

Folks in hockey circles saw this kind of production coming, years ago. In his final Mite League game he beat a goaltender seven times in a 7-2 win.

“David never stops, never quits,” Poulakidas says of the third-year varsity player and son of a former Glenbrook North state champion hockey player, Larry Rubin. “His heart is bigger than this building (Northbrook Sports Center, the team’s home venue), and he’s gotten faster. Yep, yep, yep … faster than he was last season. His hockey IQ? Off the charts. Plus he’s tenacious, tough, never wants to come off the ice.

“We have to watch his minutes; we want him to be as fresh and as healthy as possible for the playoffs.”

Rubin’s father wasn’t only a fast skater in hockey; Larry Rubin went on to star in baseball at the University of Illinois-Chicago. He is tied for sixth on the program’s career-batting-average list with a .358 (1990-91 seasons).

David’s mother, Amy, grew up in the state of Washington and competed as a Division I gymnast at UIC.

“Both of my parents have inspired me, along with all of my hockey coaches,” says Rubin, whose grandmother Carol (Larry’s mother) was a speedskating champion. “My parents were high-level athletes who competed with the mentality you need to have to perform well at that level.”

Rubin’s younger brothers also skate for teams. Andrew plays on GBN’s JV club, and Daniel is a fifth-grader who battles with Northbrook Bluehawks.

“We all love talking hockey, talking sports,” says David, the reigning MVP of the Preseason Tournament in Glen Ellyn and an all-tourney selection at two other events this winter. “I’m a big fan of sports in general. I’m into sportscasting. I’m disappointed when a professional sportscaster is not prepared or doesn’t know what he or she is talking about. Research is important in that field, and I admire a sportscaster who flows while discussing or presenting a topic.”

There’s still a chance he’ll do something to make people forget “The David Rubin Game”.

Rides don’t get much better than the sight of Rubin with the puck.