Strong support from Chicagoland golf fans, a hole-in-one by Jason Day and a special donation honoring one of the most beloved caddies in the game’s history helped the 2017 BMW Championship raise $2.6 million for the event’s sole charity, the Evans Scholars Foundation.

Day made his impressive shot on one of the two holes at the BMW Championship that awards a new BMW to the first player to make a hole-in-one. With his shot, Day received an all-new BMW M760i, which he graciously donated back to the Evans Scholars Foundation.

BMW also made a $50,000 donation to the Evans Scholars Foundation on behalf of legendary caddie Jim “Bones” Mackay. Known and beloved by golf fans for his 25 years alongside Phil Mickelson, Mackay was honored with induction into The Caddie Hall of Fame on Sept. 15 during the Gardner Heidrick Pro-Am Awards dinner.

“During this season of giving, we’re proud to once again donate the proceeds from the BMW Championship to such a worthy cause,” said Vince Pellegrino, WGA Senior Vice President of Tournaments. “The tremendous support we received from our partners at BMW, as well as Chicagoland golf fans and the local and regional corporate communities, helps ensure the Evans Scholars Foundation is able to continue awarding full tuition and housing scholarships to caddies.”

Evans Scholars also interacted with spectators at a putting challenge inside the BMW Experience, and were introduced between tee times for the final groups on Saturday and Sunday. Northwestern University Evans Scholar Mackenzie Lim was featured in a television segment produced by NBC that exposed millions of golf fans worldwide to the Program and its mission.

“The support the BMW Championship receives each year – from the fans, spectators and local volunteers, to the Western Golf Association, our broadcast partners and the players themselves – is truly unmatched,” said Trudy Hardy, Vice President of Marketing, BMW of North America. “Their support and dedication to the Evans Scholars Foundation is what makes the BMW Championship a success – and the main reason the event has raised more than $27 million to date.”

The 2017 BMW Championship marked the third time that the event was contested at Conway Farms, which has sponsored more than 25 Evans Scholars and has long been a supporter of the Evans Scholars Program. 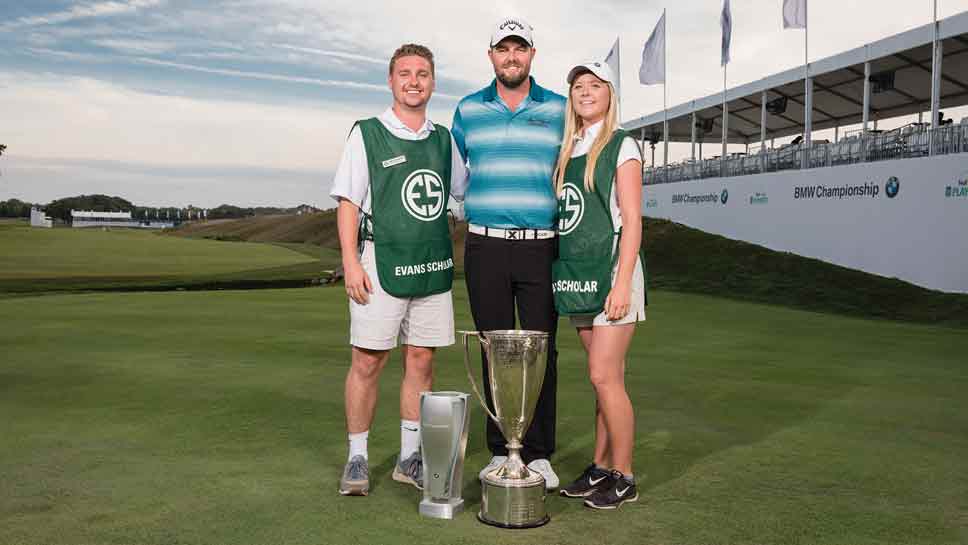 “We were pleased and proud to partner with the Western Golf Association and BMW to bring this world-class championship and the stars of the PGA TOUR to Chicago’s North Shore,” said Bob Terwall, President of Conway Farms. “As longtime supporters of the Evans Scholars Program, we are delighted to know that the proceeds from this great event will be used to help change the lives of deserving caddies.”

The 2018 BMW Championship is set for September 4-9 at Aronimink Golf Club in Newtown Square, Pennsylvania. The event will return to Chicago in 2019 when iconic Medinah Country Club hosts the penultimate event of the PGA TOUR FedExCup Playoffs and a field of the game’s biggest stars.