The eight days of Hanukkah begin on December 12, and there are almost as many ways to celebrate the holiday on the North Shore.

But first, why does Hanukkah last eight days? That’s the length of time a one-day supply of oil lasted in the Holy Temple in Jerusalem more than 2,300 years ago, according to the Chabad Center for Jewish Life & Learning in Wilmette. “The Assyrians had desecrated the ancient temple in hopes of stamping out the practice of Judaism. But the oil lasted long enough for the Maccabees to repair and rededicate the temple. In commemoration of that, Jews around the world light the Menorah as a symbol of light and liberty.”

The Chabad Center includes a Hebrew school. Four years ago, the school began hosting an annual menorah contest, where students were charged with creating their own menorahs. The Honorable Judge Lee Preston (retired) chooses the grand prize winner.

“The students have put their own passions into the menorahs by creating edible menorahs (from donuts, cake and Rice Krispies) … and even hockey menorahs,” said Esther Leah Teldon, co-director of the Hebrew school with her husband, Rabbi Moshe Teldon.

This year, she said, the school is bringing back a seven-foot “Coin-Orah,” which originated 15 years ago. It will be used collectively by the entire school.

Chabad will use the funds raised – known as tzedakah (charity) — to purchase gifts for children in hospitals as well as for people with reduced incomes. They will distribute the gifts on the last days of Hanukkah.

Chabad Center’s festivities will begin at 10:45 a.m. on Sunday, December 17, with a Chanukah Carnival run by the students of the center’s Wilmette Community High School graduating class. Following the carnival, students will be transported to Village Hall, where there will be a public menorah lighting at 11:45 a.m. with music, dancing and giveaways.

“The beautiful message of Hanukkah is that a little bit of light has the ability to push away so much darkness, and we do that by lighting the menorah,” said Teldon.

For those who want to celebrate on the first night of Hanukkah, the Chabad Center will ignite a public, six-foot menorah in downtown Winnetka’s Station Park at 6 p.m. on December 12, featuring music, holiday treats, songs and Judah the Maccabee in costume.

The park is located at 754 Elm Street, Winnetka.

A vacant storefront centrally located on the first floor of Northbrook Court will be transformed into a Chanukah Wonderland, featuring family fun for all ages during four full days of Hanukkah.

“With all of the holiday music out there, we wanted a Jewish presence as well,” said Teldon.

Slavaticki and Teldon reinvented the back of the former clothing store and turned the fitting rooms into a tot zone for toddlers. There’s even a private corner for nursing moms to feed their babies.

The front of the store will have activities for older children, including make-your- own dreidel snow globes and canvas art for Hanukkah.  Additionally, a dreidel bounce house will be located in the center of the store.

“There will be four magical days at Northbrook Court with Hanukkah music, and the kids will decorate their own donuts,” said Teldon.

Teldon said there were peak times when the event was packed last year, creating a long line out the door. For example, the olive oil demonstration attracted a large crowd.

“There’s a great energy coming from Chanukah Wonderland, and we encourage people to check the schedule of events to plan accordingly,” said Teldon. 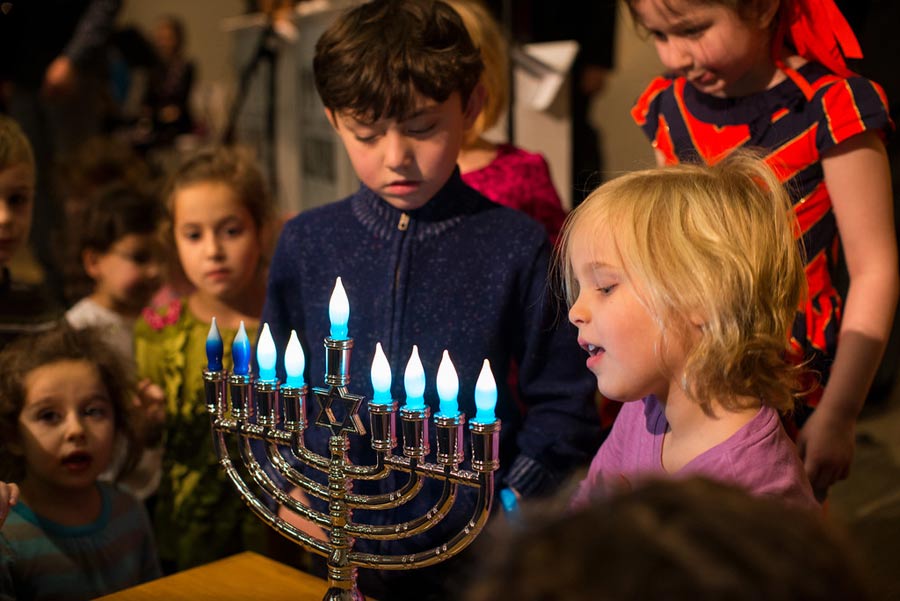 “We don’t have the vast repertoire as Christmas, so the band has put a lot of effort into expanding the Hanukkah repertoire by creating many original songs from blues to Latin style for kids and adults,” said Lori Lippitz, director of the Maxwell Street Klezmer Band. She also performs as a singer and guitarist in the band.

Some of the original song titles include Eight Nights of Joy, Everybody Dance to the Hanukkah Song, Can You See the Hanukkah Lights? and Come Home for Hanukkah.

The Maxwell Street Klezmer Band has been performing at the Botanic Garden for about 10 years.

“The Chicago Botanic Garden decided to offer special programming with lively Klezmer dance music for their guests in the midst of their very cheery Winter Wonderland series,” said Lippitz.

At the Hanukkah Concert, children will gather to light the electrical menorah while the band plays a collection of traditional Hanukkah songs. “There’s also plenty of room where kids can let loose on the dance floor,” said Lippitz.

Musical Director Alex Koffman is “the fiddler and the personality of the band,” said Lippitz. She added that Billy Kaplan, who has written some of the original music, will make a special guest appearance at the Botanic Garden’s Hanukkah Concert.

Ticket price includes the Hanukkah Concert and a visit to Wonderland Express on Sunday, December 17, with performances at 11 a.m. and 1 p.m. at the Chicago Botanic Garden in Glencoe. For more information visit www.chicagobotanic.org. 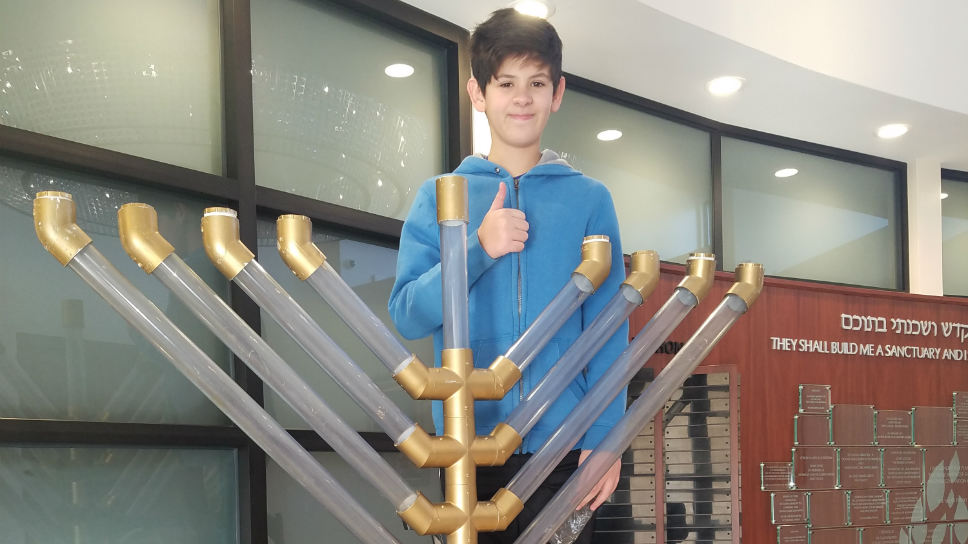 A student steps up to the seven foot tall Chabad Coin Menorah; photos courtesy of The Chabad Center for Jewish Life & Learning 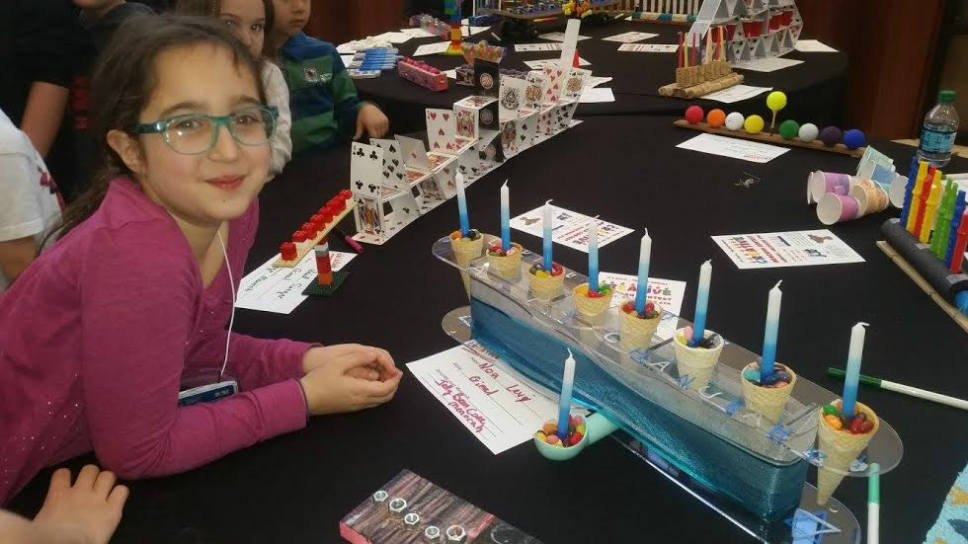 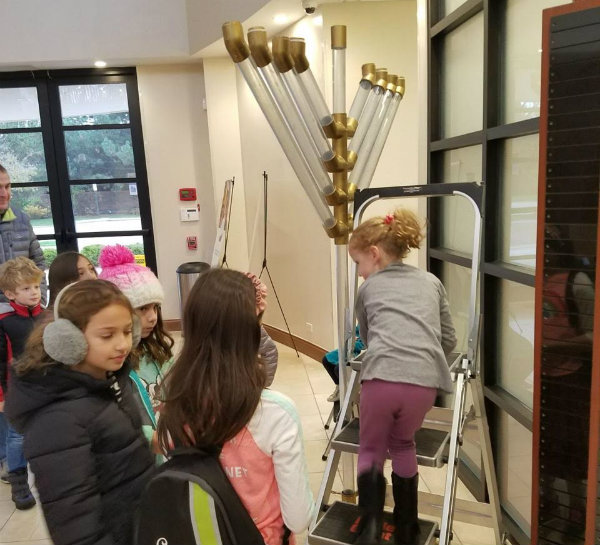 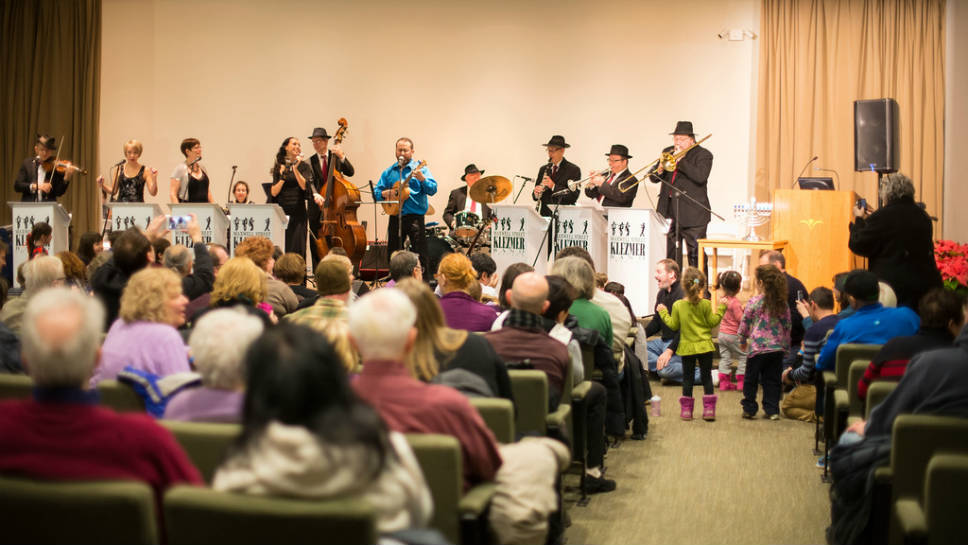 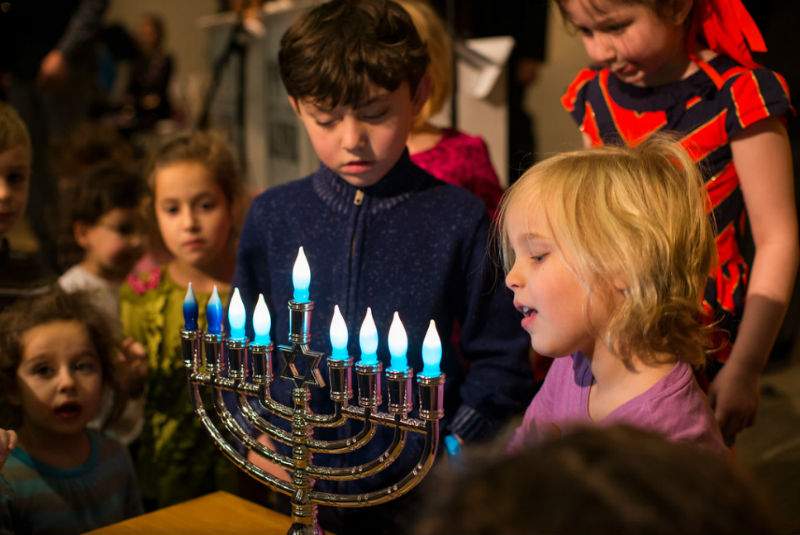 Lighting the electric menorah at the Chanukah Concert at the Chicago Botanic Garden; photo courtesy of the Maxwell Street Klezmer Band