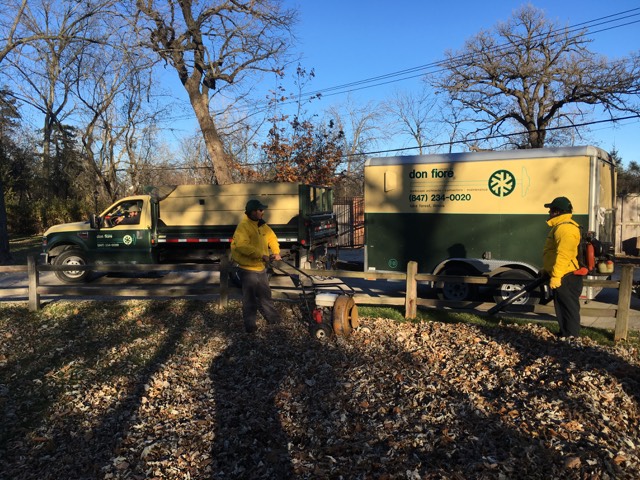 Asking for a certificate of insurance from a landscaper may not be common practice for homeowners, but Lisa Fiore, operations manager for Lake Bluff-based Don Fiore Company, suggests everyone do it.

Rooting out uninsured landscapers is part of a current campaign by the Illinois Landscape Contractors Association to reduce potential legal liability for customers and make the industry more competitive.

“I can count on one hand the number of residential customers who ask to see a certificate of insurance,” said Fiore, who is also the president of the Illinois Landscape Contractors Association in addition to her duties at Fiore. “All my commercial accounts ask for it.”

A license is not required of a landscape contractor, according to Scott Grams, the association’s executive director. Workers compensation insurance ensuring injured employees are justly compensated is mandated by the State of Illinois.

Grams said an unscientific survey conducted by the association found 40 percent of landscapers in Illinois do not carry workers compensation insurance. People can find out if their landscaper has the proper coverage by doing a search on the Illinois Workers Compensation Commission website.

The first thing the association did for its research project was run all of its members through the IWCC website. Grams said there was 99 percent compliance. Then he said the association purchased a mailing list of landscapers and found 86 percent had workers compensation policies.

The final survey came when Grams said the association asked one of its supplier members in the Chicago area for a list of all the landscapers who purchase goods from them.

“That’s where we got to the 40 percent noncompliance number,” said Grams.

Johnson said they could be the only insured and or deep pocketed defendant should someone be injured due to some sort of negligence making them a defendant in a lawsuit.

“A neighbor could be hit by a pebble flying across your yard,” Grams said describing the kind of liability a homeowner could face if the landscaper did not have liability insurance.

Fiore would like to see citizens become self enforcers by seeking a certificate of insurance and reporting those who do not furnish one. Ben Noble, a spokesperson for the IWWC, said that is how his agency does much of its enforcement. Like Fiore, he said this happens because companies in the same business do not want to be at an unfair advantage.

“Enforcement is a complaint-driven process” Noble said in an email to DailyNorthShore. “Many times other companies eagerly report noncompliance because employers that fail to follow the law have an unfair competitive advantage over law-abiding companies. At-risk employees also voluntarily notify the commission of their employer not having insurance.”

Grams said other states similar in size to Illinois, such as Florida, have between 25 and 40 enforcement officers. Noble said Illinois has six, making it harder to randomly check  whether companies comply with the law.

Penalties for failing to have workers compensation insurance can be stiff. Noble said fines can be as much as $500 per day, and the total can climb to $10,000. Fines collected go into a fund to provide payments to injured workers who are employed by an uninsured company.

Grams said the money in that fund is rarely enough. Fiore said the cost of medical treatment can be very high for an injury sustained while someone is performing a routine work activity.

“We had an employee who had a rotator cuff injury from pulling the rip cord on a mower,” Fiore said. “Medical costs can be over $500,000 for that kind of stuff.”