LAKE FOREST — Amtrak favors a Lake Forest stop on its Hiawatha service between Chicago and Milwaukee, but a group of Lake Forest residents is not happy with some of the city’s efforts to obtain that approval.

Before Lansing opened the public comment section of the meeting, he read the letter dated November 30 and gave his opinion why he does not believe the approximate two-mile long third rail feared by residents of the western part of town will ever come to pass.

“We have developed potential schedules and forecasts of ridership and revenue associated with a new stop in Lake Forest,” said Joe McHugh, Amtrak’s vice president for state supported services and development, in the letter. “Our forecasting to date has shown that a stop in Lake Forest is expected to bring in close to 40,000 new riders to the Hiawathas per year.”

Lansing also said the city paid $192,000 to a Washington lobbying firm to help get that decision. He said it was a necessary part of the process. Several residents who spoke after Lansing’s remarks said they were not happy with what they felt was a lack of transparency and a feared tradeoff between the Amtrak stop and a third rail.

“Between July 20, 2016 and October 20, 2017 (the money) was paid to lobby for the Amtrak stop,” said Joanne Desmond, president of the Academy Woods Homeowners Association and a leading organizer against the third rail. “There is no record of that in any minutes.” 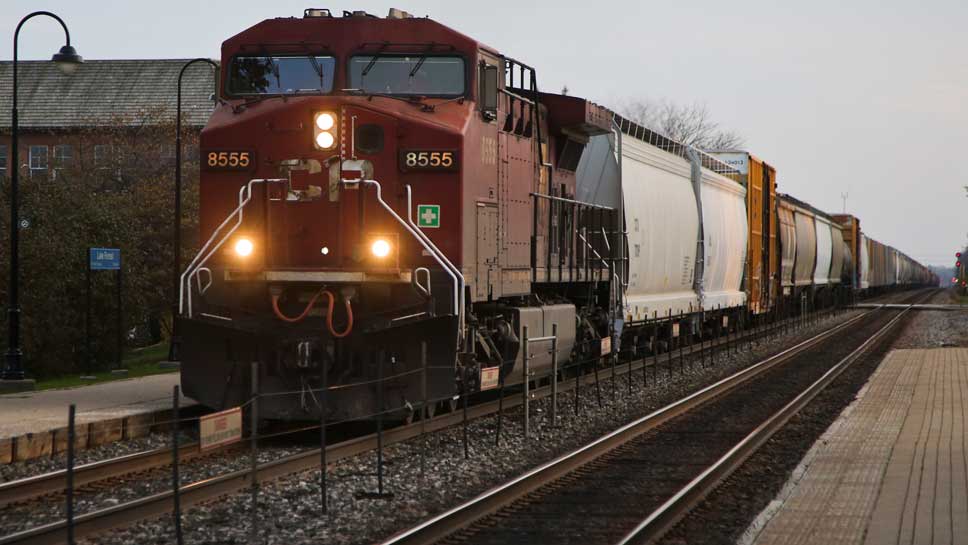 While Lake Forest has been trying to bring an Amtrak stop to its west side station, in an unrelated matter Amtrak has asked the Federal Railroad Administration to let it add three round trips daily between Chicago and Milwaukee.

One of those tracks is proposed between Highway 60 in Lake Forest and Rondout near Highway 176, according to the assessment. The other will span Glenview and Northbrook between West Lake Avenue and Techny Road. A shorter, 1,500-foot third rail is planned north of Greenwood Avenue in Deerfield.

Some residents say a perceived increase in freight traffic is causing more noise and vibrations. They want the city to hire a lawyer to fight the third rail.

“There is a train that goes by at 3 p.m. for 20 minutes,” said David Rose, one of the residents in the area. “It rumbles past my house like an earthquake. It shakes my wife’s dresser drawers.”

Lansing said he has serious doubts there will ever be a third rail even if the FRA allows it. It needs funding from Congress to the tune of $150 million. Lansing said with all the projects in the pipeline, it is not likely funding will be available.

One member of the council who wants the city to discuss the residents’ needs and their concerns about transparency is Alderman Prue Beidler. After the time for public comment ended and many in the crowd left, she wanted to have a discussion.

“Are we going to address what we just heard,” said Beidler. “They have a lot of opposition to the third rail and they deserve a response from us. We have to bring them into the process in a constructive way.”

Alderman Michelle Moreno suggested an ad hoc committee with members of the council and the community. Lansing said the problem the city is dealing with is it has no authority when it comes to decisions about the holding tracks. There was agreement something should be done but no decision on what it will be.

The one condition Amtrak put on a Lake Forest stop is construction of a pedestrian underpass, negating the need for passengers to use a grade crossing to get from the depot to the northbound tracks.

Lansing said in a November 7 DailyNorthShore story that it will take between two and four years to complete plans for estimated $9 million project and obtain the funds, hopefully through a federal grant, to pay for the underpass. He said he is also exploring a public-private partnership with some of the businesses in the area to fund part of the underpass project.