Are you looking for a book to give as a holiday gift or to put on your own wish list?

Owners of the North Shore’s three independent bookstores—Lake Forest Book Store, The Book Bin in Northbrook and The Book Stall in Winnetka— took time from their holiday preparations to offer suggestions to DailyNorthShore.

There were no unanimous selections, but four books in three categories —nonfiction, children’s and coffee table or gift — were listed twice.

Both Stephanie Hochschild, owner of The Book Stall, and Laura Skinner, buyer at Lake Forest Book Store, rave about Leonardo Da Vinci by Walter Isaacson in the nonfiction category. Skinner called the biography a “passionate portrait of a gigantic historical figure who was an artist, scientist and genius in the true sense of the word.” Hochschild said it is a hard book to put down.

“Another masterful biography from the amazing Mr. Isaacson,” said Hochschild. “Don’t be put off by the heft — this biography is compelling reading.”

Alli Mengarelli, owner of The Book Bin, suggested two very different nonfiction selections. One, Sons and Soldiers by Bruce Henderson, is a World War II story about young Germens who fled the Nazis going to America but returned to Europe to fight against their former country. Peter Wohlleben’s Hidden Life of Animals deals with animal emotions. 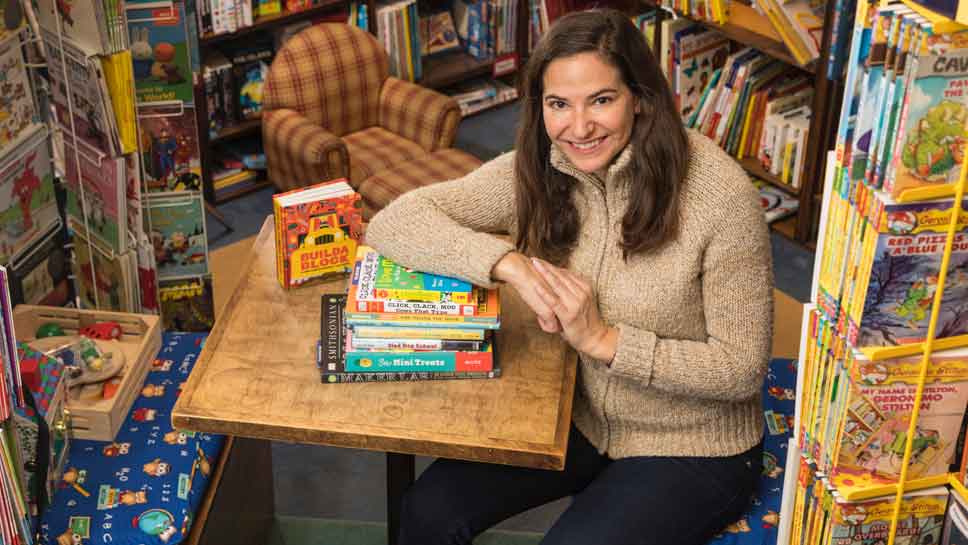 “This is an easy book to pick up and put down,” Mengarelli said of the Hidden Life of Animals. “Through observation and research, the author presents complex emotions exhibited by animals in simple but very interesting examples.”

Skinner and Hochschild also recommend a nonfiction animal story. American Wolf by Nate Blakeslee is a “completely engrossing book about the fallout surrounding the reintroduction of wolves into Yellowstone National Park. Few creatures are as despised and misunderstood as the wolf,” Hochschild said. “Hunted to near extinction by ranchers and cattlemen, wolves have managed to survive. This heartwarming true story demands human understanding of the complex social organization of wolves and their essential role in the ecosystem.”

When it comes to a book written with Christmas in mind, both Hochschild and Skinner recommended the 12 Sleighs of Christmas by Chicago author Sherri Duskey Rinker. When Santa’s elves discover Santa’s sleigh is in bad shape, they all give ideas how to craft a new one.

One of Mengarelli’s favorite children’s holiday selections is I Love Music by Marion Billet. She said the reinforced board pages let the reader/listener hear as well as read.

“Introducing various instruments to the very young is fun for everyone,” Mengarelli said. “There hasn’t been a person yet we’ve shown this book to who hasn’t bought it.”

For those looking for a book to go on a coffee table, both Skinner and Hochschild suggested Wise Trees by Dianne Cook. It has photographs of more than 50 historical trees from around the world. It shows the trees in their natural environment “reinforcing a role in human history that transcends the merely practical,” said Hochschild.

Another unusual children’s book with a historic bent recommended is The Purloining of Prince Oleomargarine. Mark Twain started to write it years ago, and it was finished by the writer/illustrator team of Philip Stead and Erin Stead.

“This lovely book started as a story Twain told his daughters about a boy with the ability to speak to animals,” said Hochschild. “The illustrations in this book are beautiful.”

Works of adult fiction recommended are Little Fires Everywhere by Celeste Ng, Manhattan Beach by Jennifer Egan, Sing Unburied Sing by Jesmyn Ward, Seven Days of Us by Francesca Hornak, The Story of Arthur Truluv by Elizabeth Berg, Before We Were Yours by Lisa Wingate, The Trust by Ron Balson, Beartown by Fredrik Backman, The World of Tomorrow by Brendan Mathews, The Heart’s Invisible Furies by John Boyne, Magpie Murders by Anthony Horowitz, and Legacy of Spies by John Le Carre.

Works of nonfiction suggested are The Long Haul: A Trucker’s Tales of Life on the Road by Finn Murphy, L’Appart: The Delights and Disasters of Making My Paris Home by David Lebovitz, The Vietnam War: An Intimate History by Geoffrey C. Ward and Ken Burns, Grant by Ron Chernow, and Sisters First by Jenna Bush Hager and Barbara Bush.

Additional suggestions for the coffee table include A Man and His Watch by Matt Hranek and Endangered by Tim Flach.

More children’s selections are Red and Lulu by Matt Tavares, The Vanderbeekers of 141st Street by Karina Yan Glaser, The Explorer by Katherine Rundell, Sled Dog School by Terry Lynn Johnson, Insignificant Events in the Life of a Cactus by Dusti Bowling, and Song of the Wild: A First Book of Animals by Nicola Davies and illustrated by Petr Horacek.