HIGHWOOD – The landmark former Highwood Fire Station property is moving ahead of schedule and is slated to close later this month. If all goes according to plan, Tala Coffee Roasters will open in spring 2018.

The man behind the redevelopment project is Michael Koenitz-Hudac, a 2004 graduate of Highland Park High School and the owner of Preservation Properties Group.

“The coffee house is something that the community was looking for and really got behind, and it’s something that I’m planning to bring to Highwood,” said Koenitz-Hudac. “My goal is to preserve the fire station to make it a destination for the community and people in the surrounding neighborhoods too.”

The City of Highwood closed the fire station at 428 Green Bay Road in 2016 after partnering with Highland Park to deliver fire and emergency medical services.

Last May, the Highwood City Council voted in favor of the proposal put forth by Preservation Properties Group which would include retail space on the first floor anchored by a coffee tenant and office space on the second floor in the former Highwood Fire Station.

Koenitz-Hudac said Preservation Properties Group has been working closely with the city to finalize the development plan and the agreement. 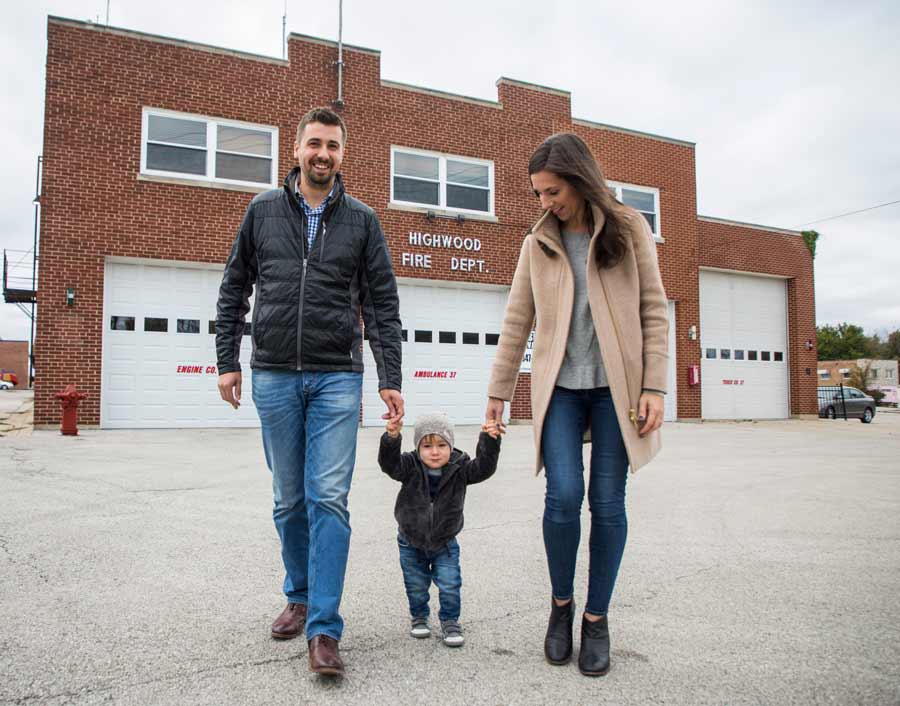 Tala Coffee Roasters participated in the Highwood Evening Markets and  Highwood Pumpkin Fest, so they’ve been getting involved in the community, said Koenitz-Hudac.

Ryan Hickman founder of Tala Coffee Roasters said Tala was searching for the perfect café space even before they opened their roasting and packaging facility in Libertyville. The Libertyville location is not a retail space.

Tala Coffee Roasters business partner Joanna Tong, explained that her college roommate lives next door to one of Koenitz-Hudac’s Highwood properties. When he mentioned that he was looking for a coffee shop to put in the Highwood Fire Station, she immediately called Joanna Tong.

Tala Coffee Roasters was supportive throughout the process in expressing their commitment to opening in the fire station.

In comparing Tala Coffee Roasters products to popular coffee chains, Hickman said, “We offer the same variety of coffee drinks, just with a higher grade coffee and a much lighter roast profile.”

Joanna Tong’s husband and business partner Stefan Tong said Tala Coffee Roasters would much rather be known as a local small Highwood business then a big chain spread out across the country. “We want people to know that when they walk into Tala’s we’ll know their names.”

Hickman added, “We want to pay homage to the local landmark that the Highwood Fire Station is and always will be.”

The Fire Station will be the fifth property in Highwood for the Preservation Properties Group. Koenitz-Hudac explained that it all began with the home he shares with his wife, Anita Koenitz-Hudac, a school psychologist and 15-month-old son, Charles Koenitz-Hudac.

“He’s walking, getting a little bit of an attitude and he’s the happiest baby I’ve met,” said Koenitz-Hudac. He added that he met his supportive wife when they were attending separate high schools, and they recently celebrated their fifth anniversary.

“It helps to see the potential a lot of the homes have and also the impact that remodeling a house has on the neighborhood and the community,” said Koenitz-Hudac.

He went to college for three and a half years, graduated early and moved back to Highwood, when he noticed that a younger demographic has been following his lead.

Koenitz-Hudac said Highwood is a great place to live for young couples who are looking to start a family especially those who work in the suburbs and don’t want to commute.

“You can walk anywhere in Highwood and there’s a lot of redevelopment and it tends to be more affordable,” said Koenitz-Hudac. “We also have some of the best school districts.”

Koenitz-Hudac serves on the board for Celebrate Highwood, and the Highwood Historical Society. “I think it’s important to be active and involved in the community you live in, and that’s why I take pride in preserving the Highwood Fire Station.” 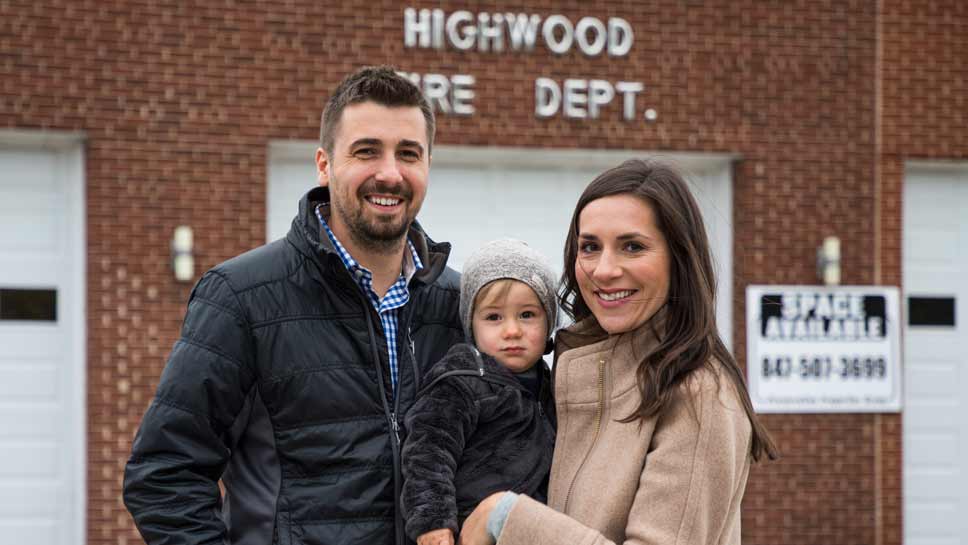 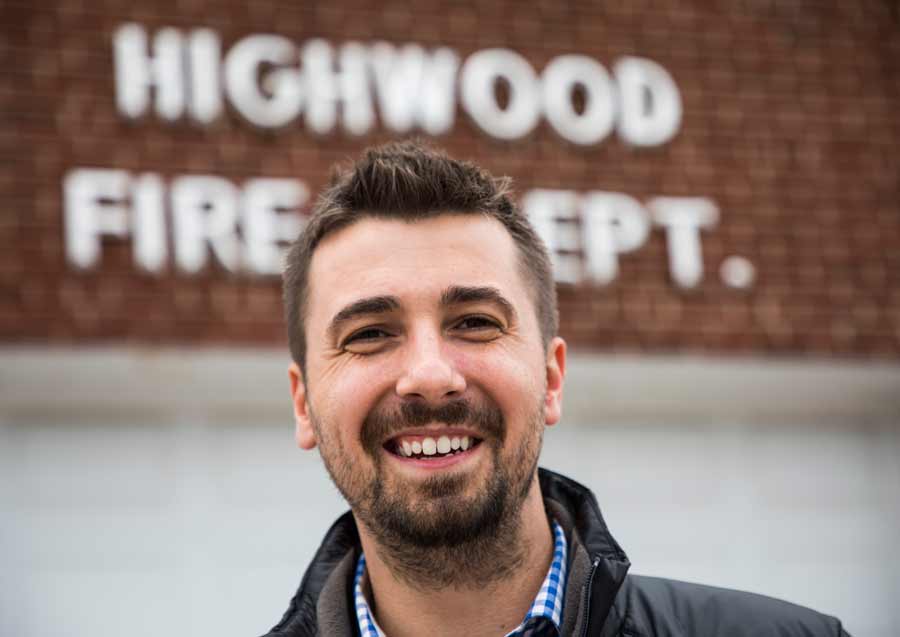 Michael Koenitz-Hudac in front of the hold Highwood firehouse, which will soon be a coffee shop. PHOTOGRAPHY BY JOEL LERNER/JWC MEDIA 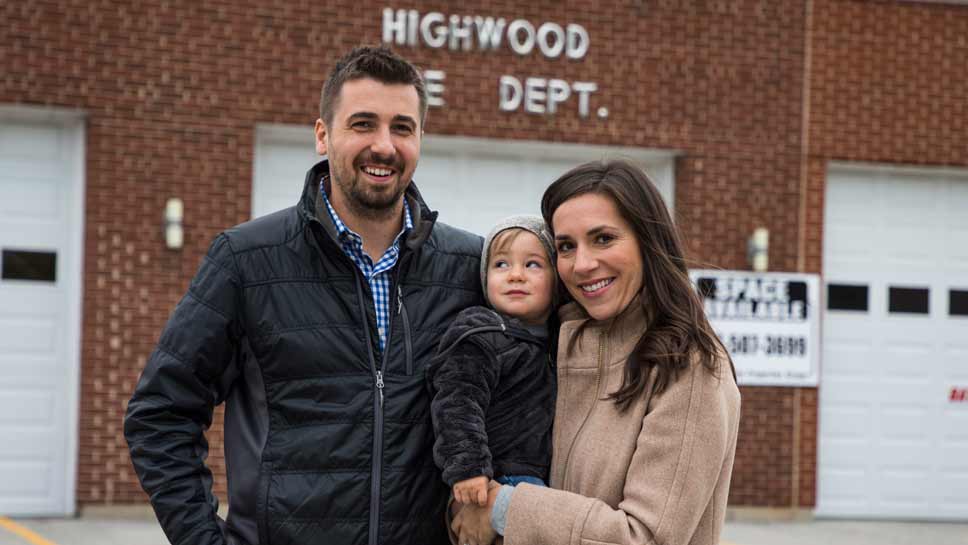