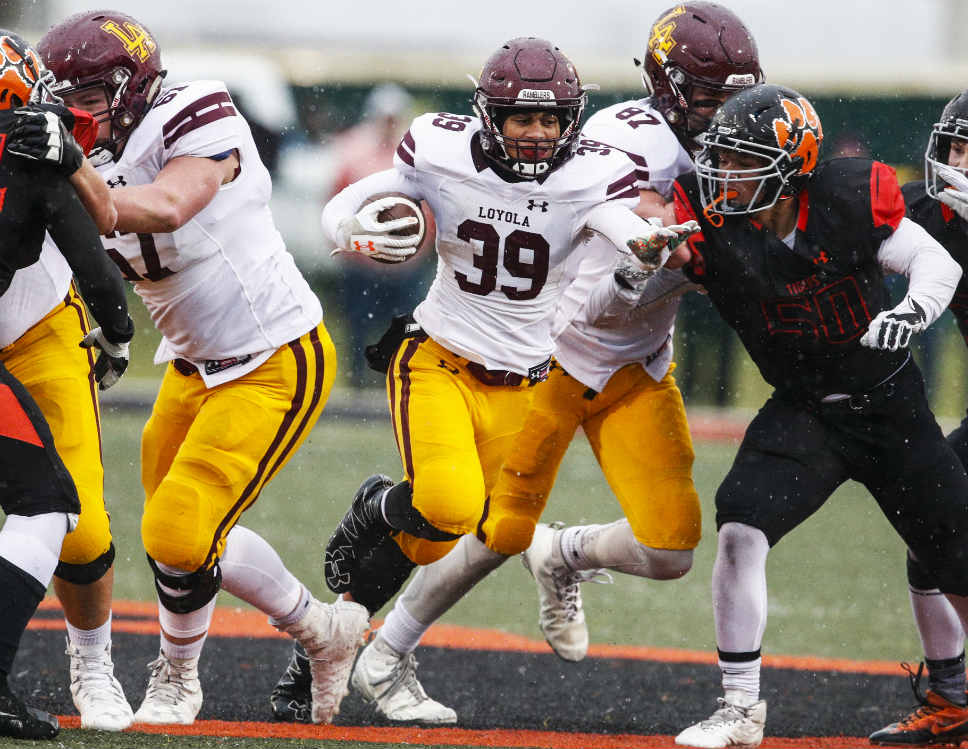 Loyola Academy’s Rhys Logan hits the hole during the state semifinal. He scored on an eight-yard run just before halftime and led the team in rushing. PHOTOGRAPHY BY JOEL LERNER

To reach Edwardsville High School by car, van or bus on Interstate 55, fans of the Loyola Academy football team had to pass through Logan County. Along the way, there’s an exit for the Logan County Fairgrounds.

To reach Northern Illinois University in DeKalb, site of the Class 8A state football championship game on Nov. 25, the Ramblers had to get some heavy production from a fairly unexpected source: Rhys Logan.

Logan’s pivotal run — a slippery eight-yard touchdown just before halftime — was one of the awe-inspiring moments in LA’s rain-drenched 17-10 victory over the host Tigers in a state semifinal on Nov. 18.

Go ahead, search the roster and you will find him. His name is neatly tucked in between No. 38 — Charlie Owens — and No. 40 — Christopher Scott.

The swift, shifty and sometimes sideways-running junior tailback — essentially a scout team player for the first 12 weeks of the season — basically came out of nowhere to play a surprisingly important role in LA’s 12th straight win.

He came off the bench and turned the Edwardsville’s football field, situated about 20 minutes from St. Louis, into Logan’s Playground.

“He’s a junior who has been waiting his turn,” said LA head coach John Holecek. “Running back is one of our deepest positions. He has a lot of guys in front of him.

“But he is super explosive,” the coach added.

Logan showed some real elusiveness on his TD run, capping a five-play, 51-yard drive. He used a couple of quick cuts and went in standing up.

“I pretty much just walked in,” said Logan. “All I had to do was break one tackle. It was all my line.”

The celebratory part of the touchdown had plenty of entertainment value. In the end zone, near the goal post, the 5-foot-8, 170-pound Logan went up to chest bump LA tight end Charlie Gilroy (6-5, 225).

Logan went up — and fell down. Smiling the entire time.

Credit Gilroy. He was the only one to tackle Logan on that play.

“I saw it. It was pretty funny,” LA senior right tackle Joshua Green said. “It was good. It made me happy.”

“It’s a state semifinal game,” said Logan. “[So] your emotions just come out.”

Logan finished the game as LA’s leading rusher: 14 carries, 64 yards. He gained five or more yards on seven of his attempts.

Holecek loved the Logan TD, but he was even more inclined to celebrate what LA’s defensive unit did — especially late in the game. Down seven points, the Tigers (9-4) were simply stymied on their final three possessions.

The Ramblers turned up the heat and brought pressure from every direction. In the final 10 minutes of the game, they blocked one punt while recording five sacks and adding one other tackle for loss.

“We did everything we could to put them in a pinch,” said Holecek.

As a result, the Ramblers put one of the state’s best running quarterbacks — Kendall Abdur-Rahman — in a bind. Which is not easy, considering the 6-1 junior accounted for 351 yards of total offense in Edwardsville’s win over Huntley in the opening round of the playoffs.

“His highlight film is one of the best I’ve see. He’s a Michael Vick,” said Holecek, a former teammate of Vick’s — when the two played for the Atlanta Falcons.

Abdur-Rahman was limited to 70 yards on 15 touches. He completed only two of five passes for 25 yards.

“Their passing game doesn’t include a lot of complicated schemes,” Holecek said, “I like our chances against a team that likes to keep pounding the ball.”

LA’s final defensive series, which started at the Edwardsville 30-yard line with 2:45 left on the clock, featured a six-yard sack by Patrick Daniels on third down and a seven-yard shared sack by Anthony Rodriguez and Armoni Dixon on fourth down.

In the next-to-last series, Daniels sacked Abdur-Rahman for a three-yard loss on second down, while Marty Geary and Jordan King shared an eight-yard sack on third down.

And, in the possession before that, it was Rodriguez (1-yard tackle for loss) and Scott (2-yard sack) bringing the pressure. Then, on fourth down, a number of Ramblers broke through to partially block a punt.

“Blocking that punt gave us a lot of momentum,” said Daniels, who ended up with six tackles and two sacks. “I thought our defense stepped up big today.

“We had a little trouble with their quarterback,” the outside linebacker added. “But we figured it out.”

“We turned it up a notch,” added Scott, who finished with seven tackles, one sack and one TFL. “And we did it against a great quarterback. That guy reminded me a lot of Quinn [Boyle, LA’s senior quarterback].”

With 4:00 left in the third quarter, Boyle concluded a workmanlike 13-play, 77-yard drive (all running plays) with a two-yard TD run to put the Ramblers ahead 17-3.

His top receiver was senior James Joyce, who caught three passes for 64 yards.

Joyce’s unforgettable catch was a 21-yarder over the middle on LA’s final series of the first half. Despite being clocked on the play, he held on to the ball, and a subsequent “helmet to helmet” penalty was called on an Edwardsville defender.

On the very next play, Logan danced in the end zone.

Notable: Loyola will be making its third straight trip to the Class 8A state title game. The Ramblers will face No. 1 seed Lincoln-Way East (13-0) in the title game at 7 p.m. Lincoln-Way East knocked off reigning state champ Maine South 24-14 in the other state semifinal game. … An injury to sophomore Trevor Cabanban, who rushed for 185 yards and two touchdowns in LA’s state quarterfinal win over Marist on Nov. 11, opened the door for Rhys Logan. Senior Hamid Bullie, who is still coming back from an injury, ran the ball only once in the second half. 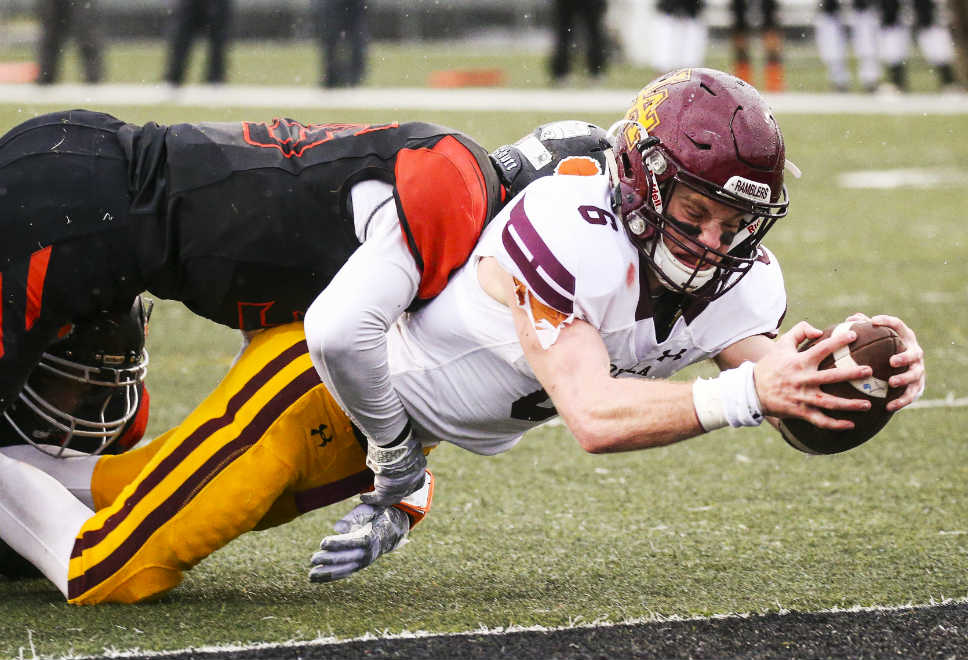 LA quarterback Quinn Boyle stretches the ball and scores on a two-yard run in the third quarter. PHOTOGRAPHY BY JOEL LERNER 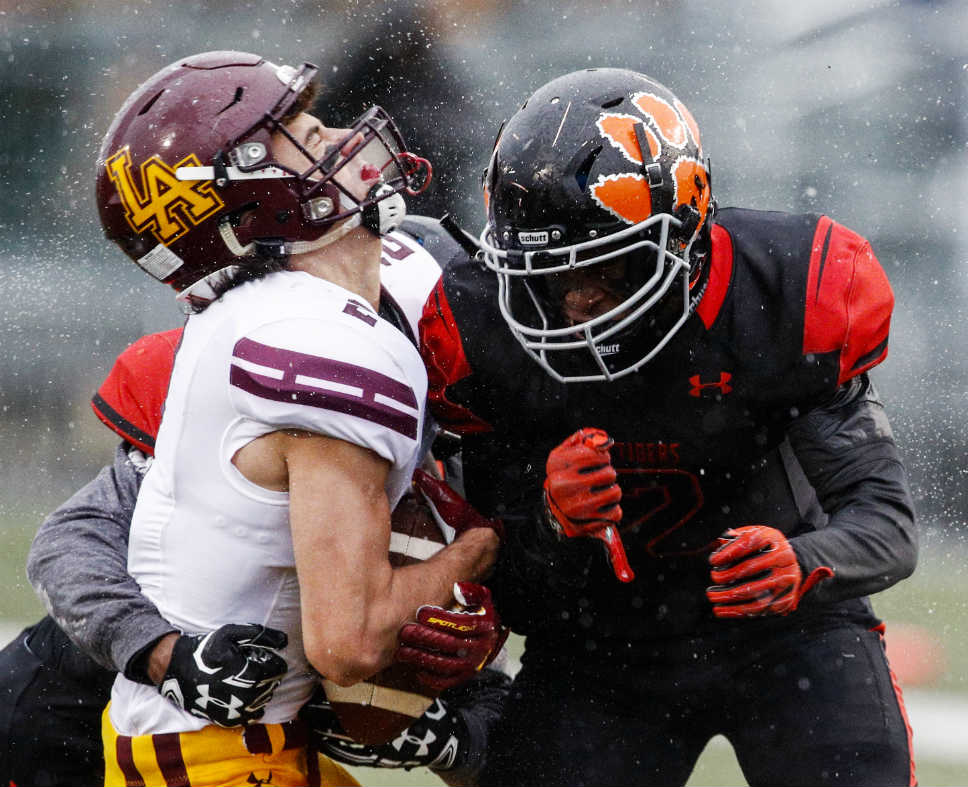 Ramblers wideout James Joyce makes a 21-yard catch late in the second quarter. He hung onto the ball while taking a big hit from an Edwardsville defender. PHOTOGRAPHY BY JOEL LERNER 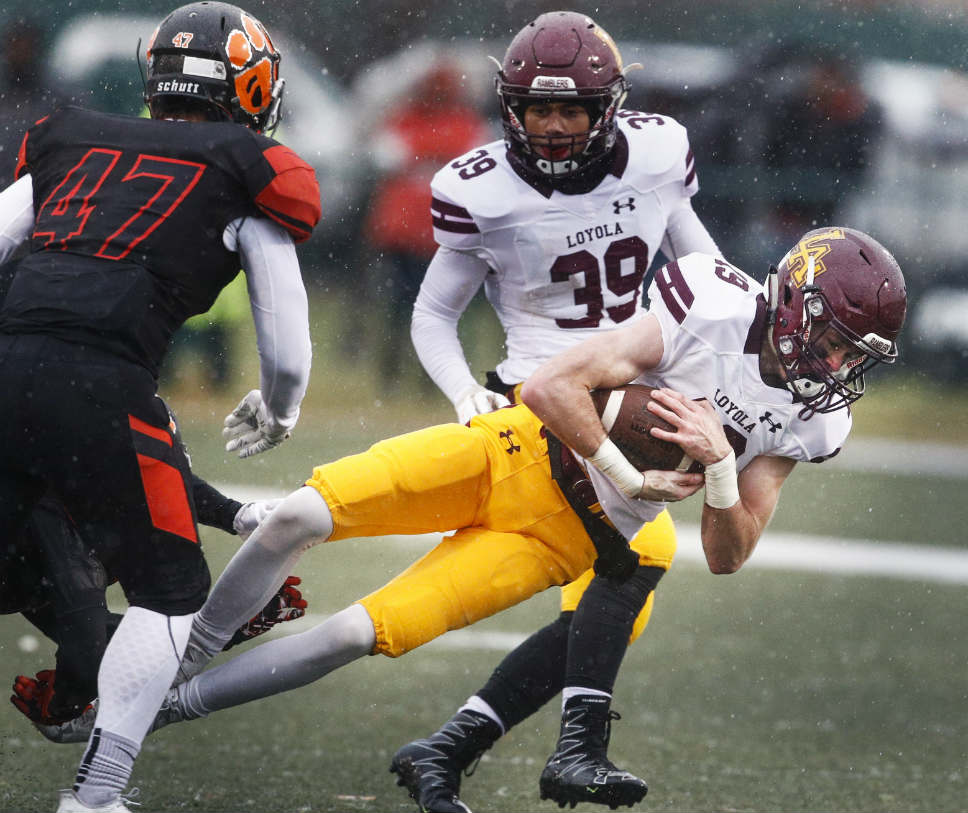 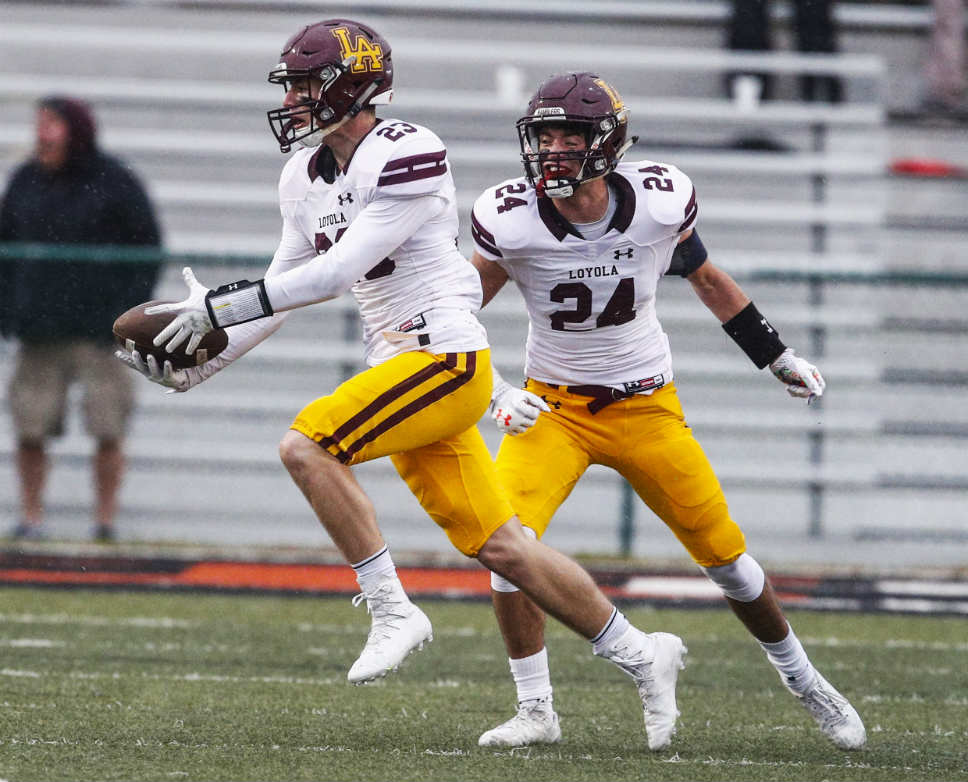 Hugh Kelly of the Ramblers reacts after recovering a fumble while John Lynch looks on. PHOTOGRAPHY BY JOEL LERNER 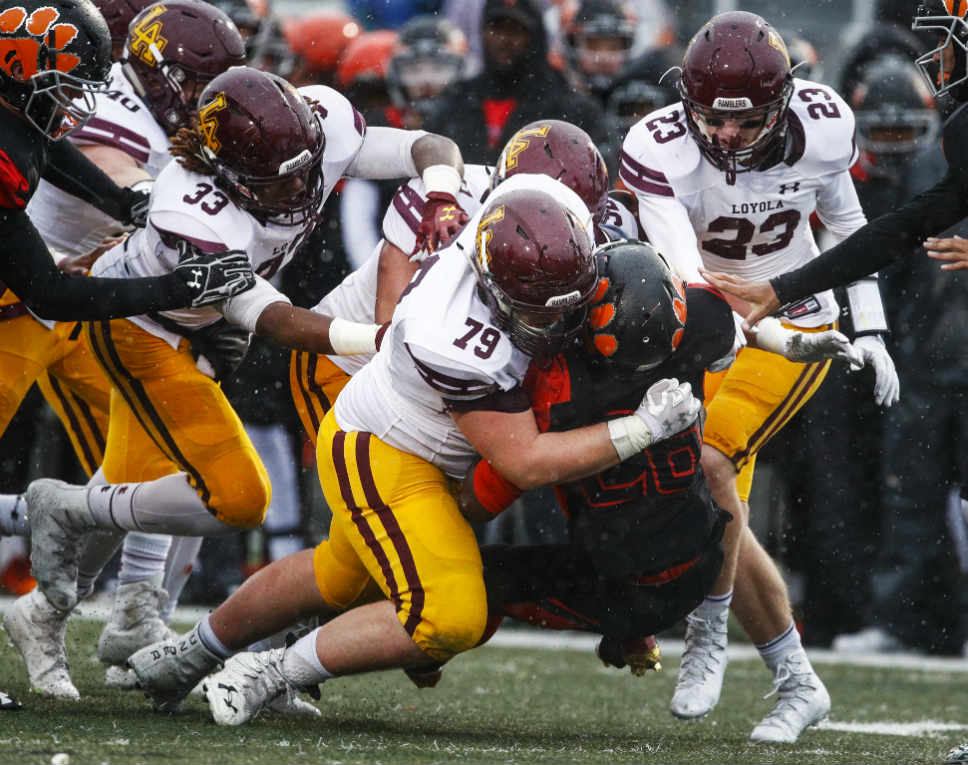 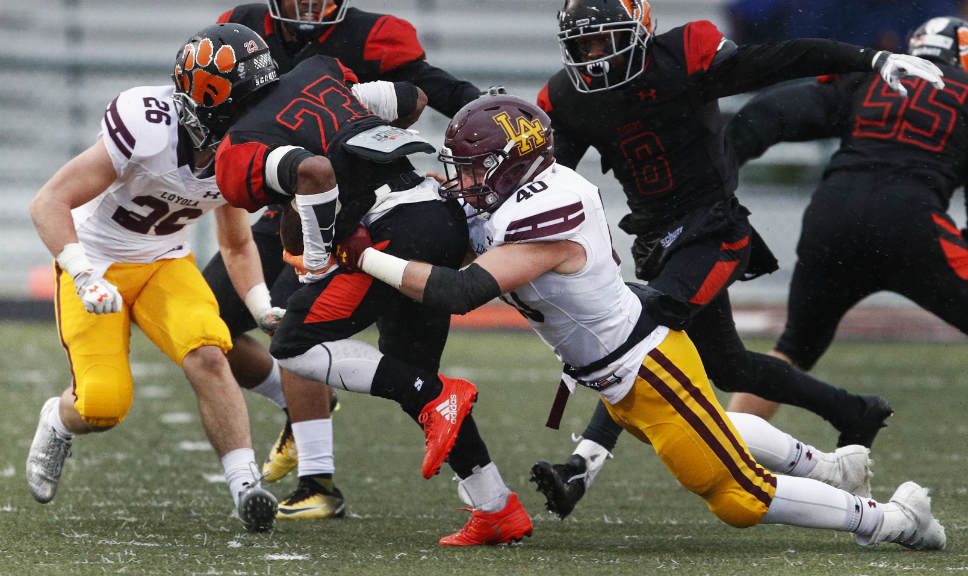 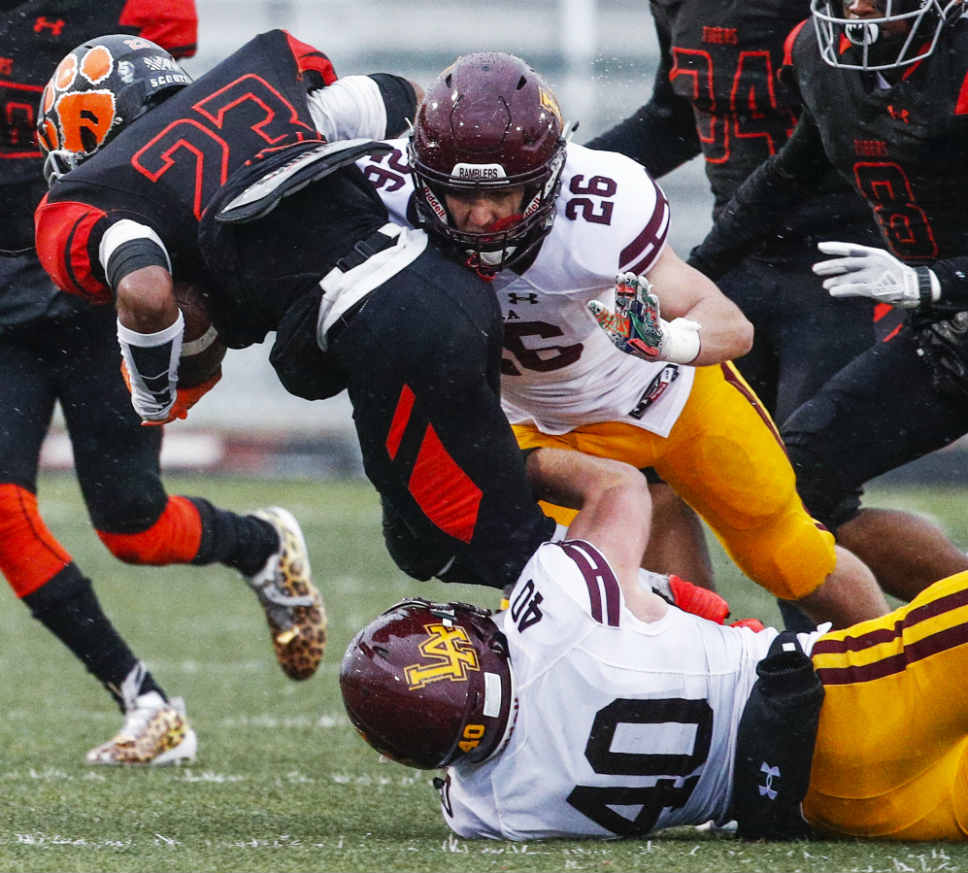 Charlie Largay (No. 26) teams up with Christopher Scott to take down Dionte Rodgers. PHOTOGRAPHY BY JOEL LERNER 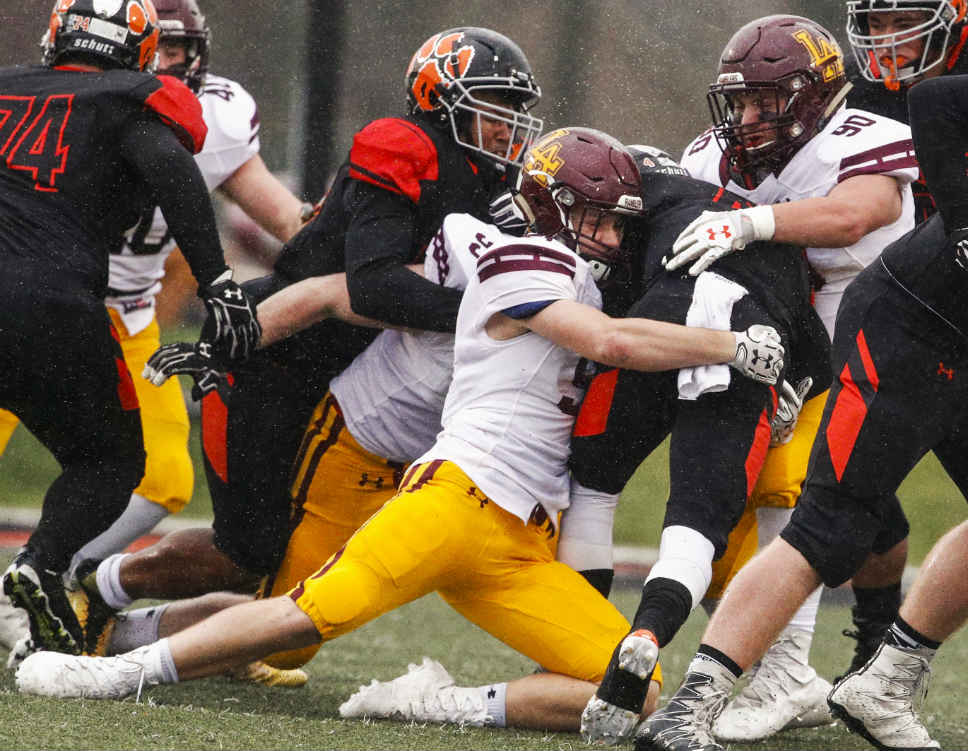 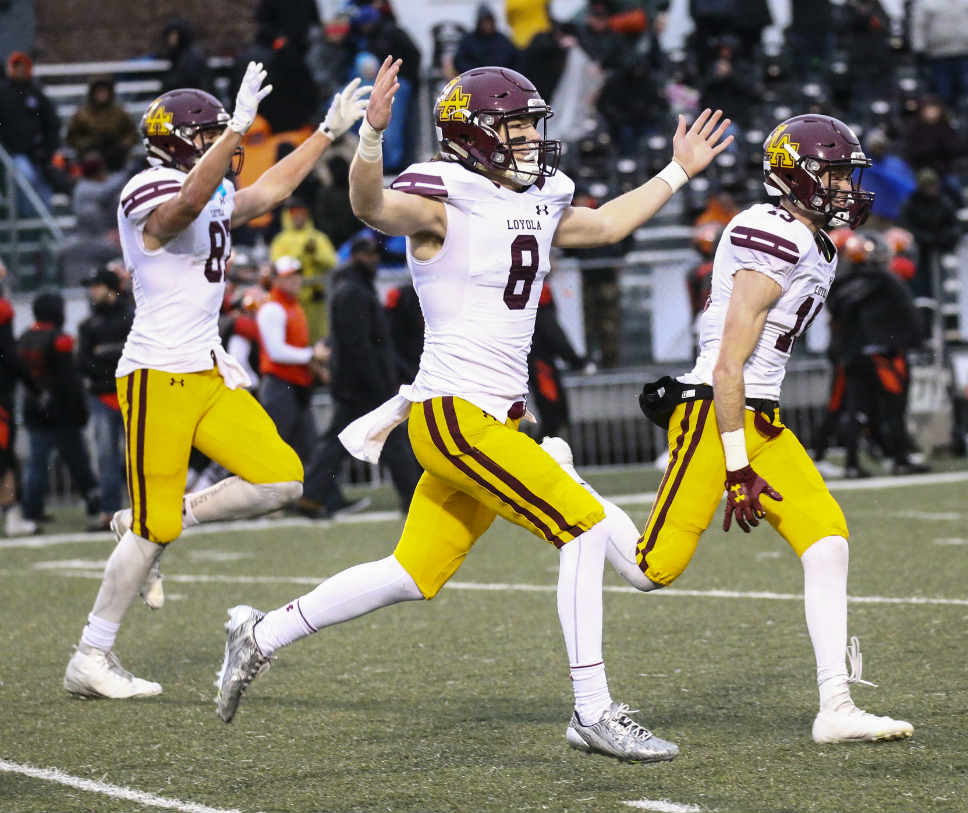 Charlie Gilroy, Dillon Grant and Rory Boos race off the field at the end of the game. PHOTOGRAPHY BY JOEL LERNER 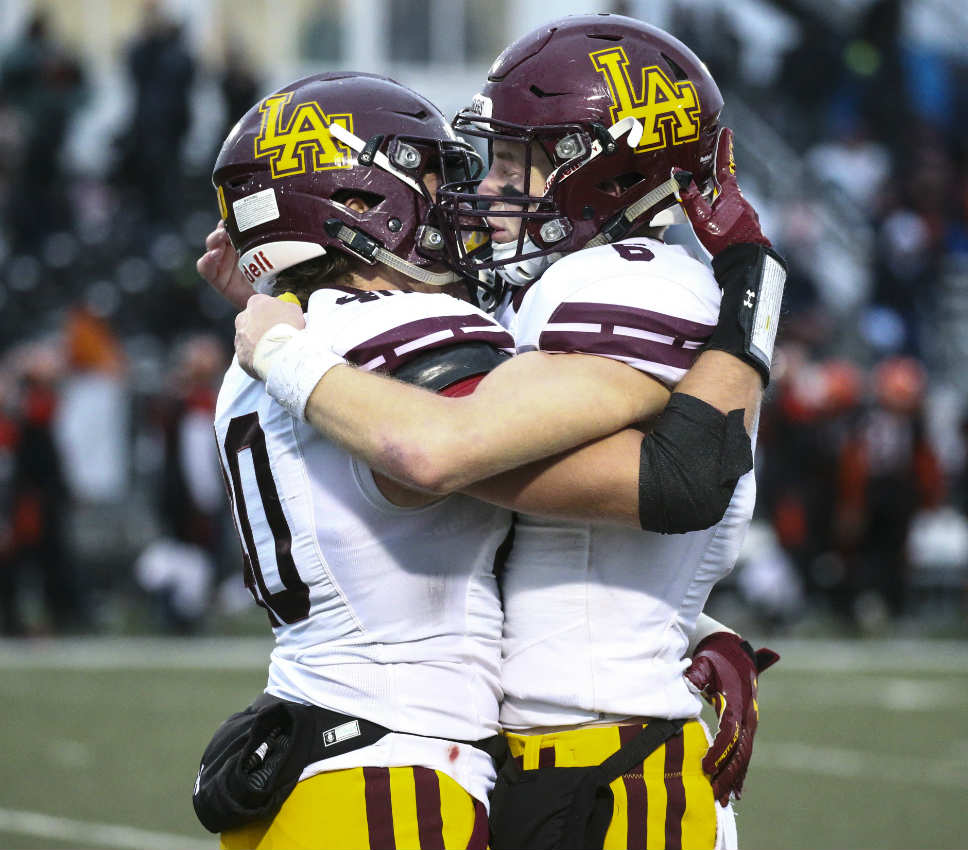 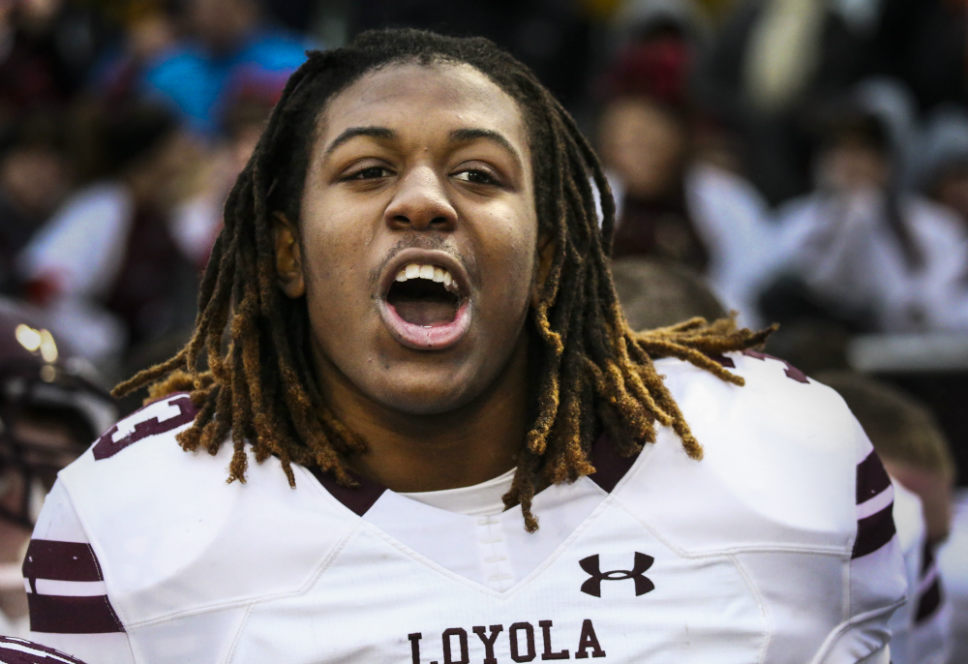 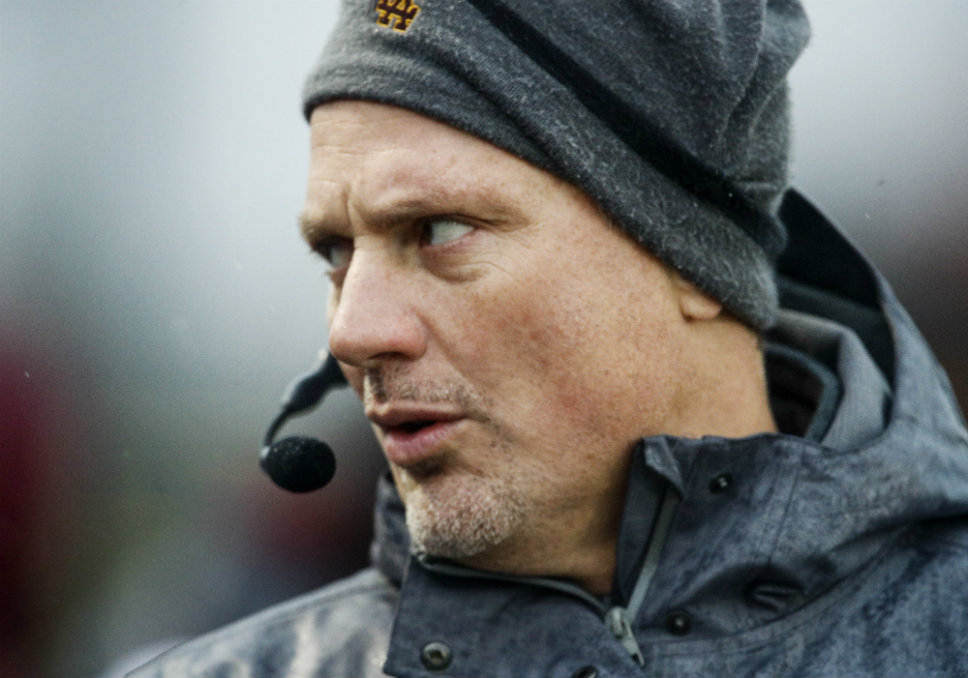