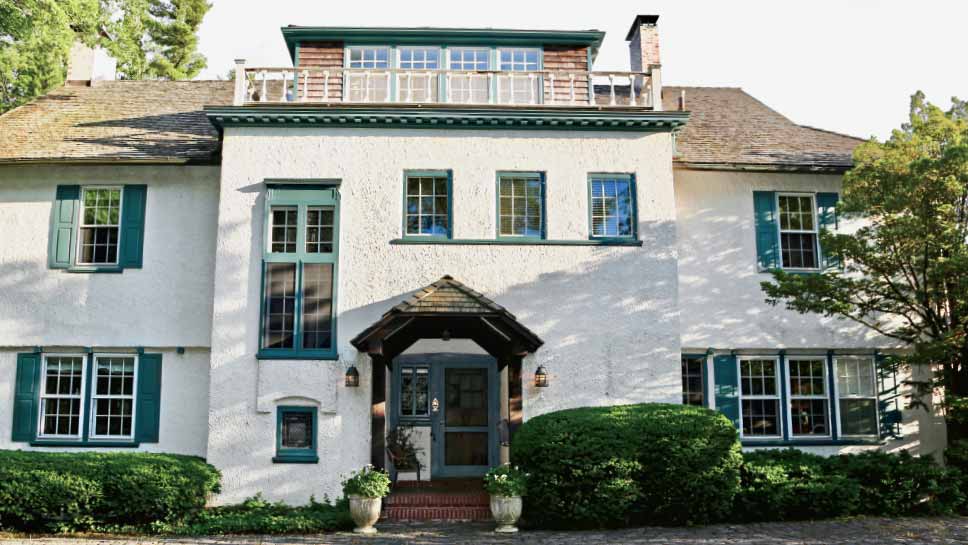 While not as grand as some of Howard Van Doren Shaw’s other Lake Forest estates, this 1906 Arts and Crafts home incorporates both English cottage and country villa architectural elements. We step inside the landmark property that replicates many elements in Shaw’s iconic country house. PHOTOGRAPHY BY KERRI SHERMAN

“Small, but adequate.” That’s what the Latin inscription on the chimney at Michaele Ann and Patrick McDonnell’s Sheridan Road home means. But one glance and you assess a few things about that statement.

For one, it’s classic modesty from Howard Van Doren Shaw—the architect who built this Arts and Crafts cottage in 1906 for his friend Edward Larrabee Baker, heir to the Case Farm Implement fortune. With gracious exterior columns, classic Shaw rooflines, and an adjoining pergola, the house is only “small” in relation to the architect’s larger estates in Lake Forest. (Never mind that the families who have called it home over the last century have found it more than “adequate.”) 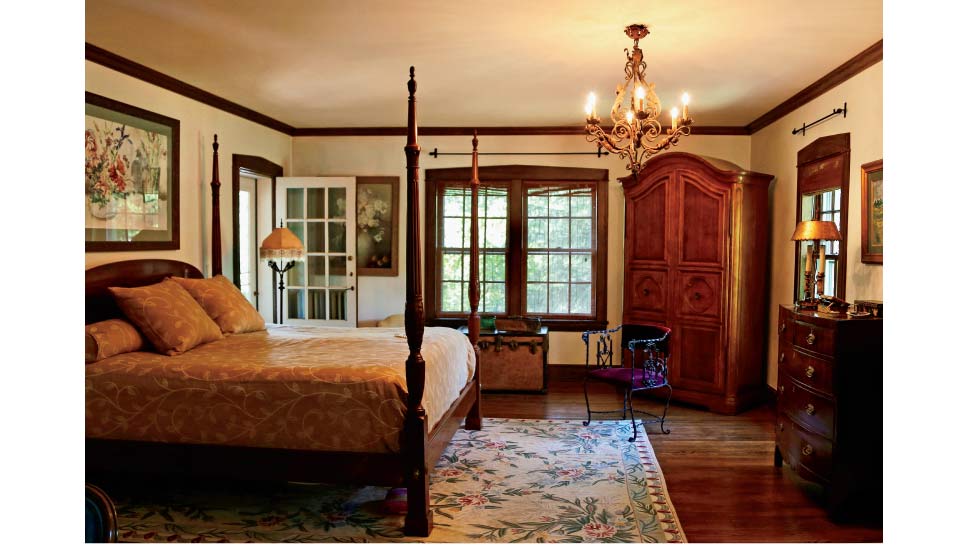 Secondly, it might look strangely familiar to those who are supporters and friends of Lake Forest’s Ragdale Foundation. From its wood framing details and sleeping porch to the quintessential Shaw blue paint trim, one would almost think they are looking at a miniature version of Shaw’s own 1896 Ragdale estate.

“The house is essentially a flipped version of Ragdale with the columned back of the home reminiscent of the front of Shaw’s iconic estate,” explains Michaele Ann McDonnell, who has spent the last 27 years restoring and maintaining the integrity of the house. “Moving from the East Coast, I was not familiar with the architect, Howard Van Doren Shaw. Therefore, during the restoration process, I made a conscious effort to visit Shaw homes so as always to be mindful to incorporate Shaw elements during the design process.”

It is a process that McDonnell—an art history major, lifelong art collector, and art consultant—has truly enjoyed. In addition to becoming familiar with Shaw’s work, she also researched the work of William Morris—father of the Arts and Crafts movement in England. 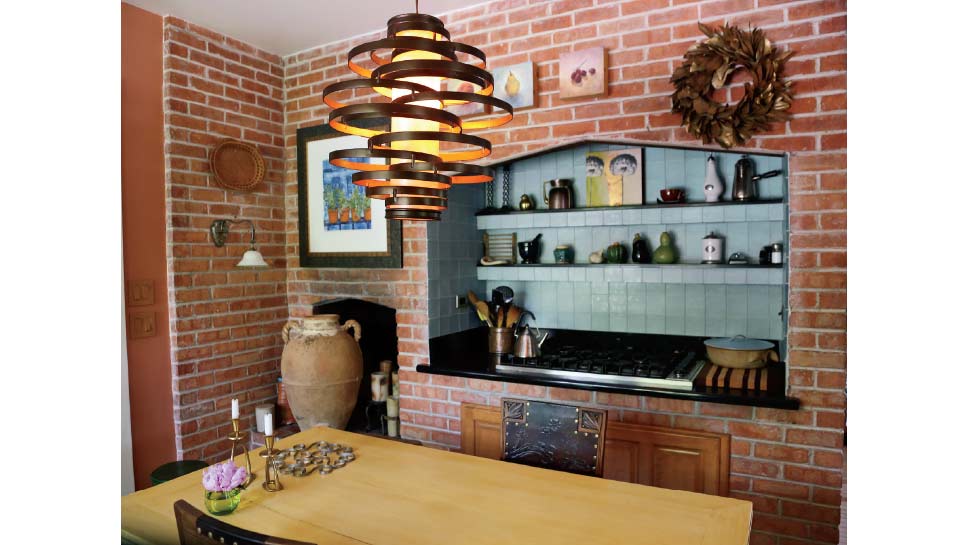 “Within his eclectic European architectural style, Shaw implemented and integrated these elements, which are also evident at Ragdale,” McDonnell explains. “Another similarity to the Ragdale estate is a barrel-vaulted ceiling in the foyer with plaster cast organic motifs. This barrel-vaulted ceiling was replicated in the new master bath.”

The parallels between the two properties have been celebrated by both the McDonnells and Ragdale Foundation staff, who have visited the home over the years.

McDonnell says her family’s story in the house started on Labor Day weekend in 1990. “Moving older children, two in college in the Midwest, and one in high school was challenging,” she explains. “My goal was to find a home that would bind my family together in a new city, create an environment where they would be happy, and ultimately embrace as their new home. Upon entering the driveway, my first impression was the amazing fence which is curved and crowned with copper mythological sculptures.”

It was a perfect fit. 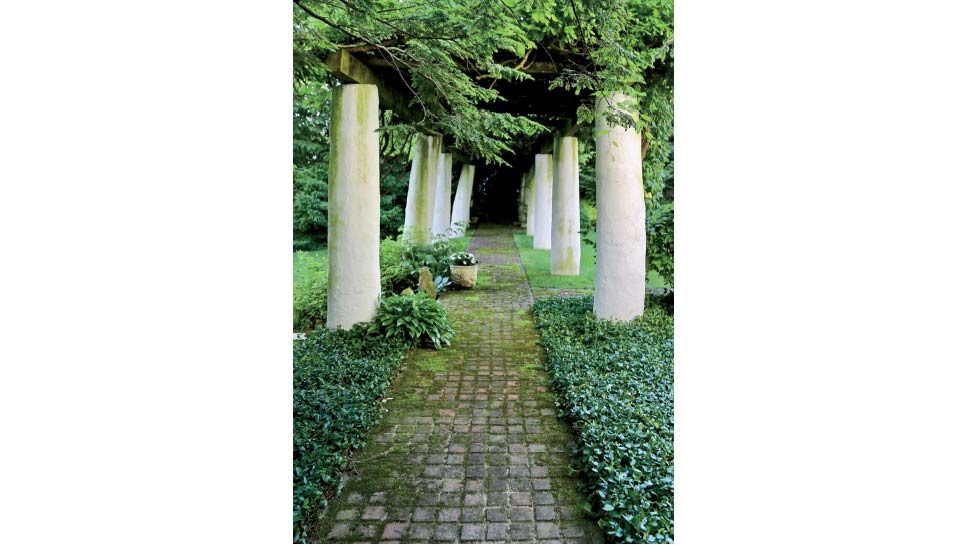 The property encompasses more than an acre, and is populated with many century-old trees and gardens. “Badminton, soccer, football, lacrosse, tree climbing, and apple picking happens here,” says McDonnell. “As a designer, the outdoor landscape is as important as the indoor space. Over these years, we have planted a multitude and variety of mature trees. The children’s grandmother passed on, and with her inheritance, a lovely boxwood perennial garden was established.”

The artistic spirit the McDonnells have brought to their home also parallels Ragdale, where the arts and the great outdoors were celebrated.

“One hundred years later, our mini-Ragdale functions in much the same way,” says McDonnell, whose restoration efforts won an award from the Lake Forest Preservation Foundation in 2001. “Our walls are covered with original art, the den houses a wall of books which are read, board games are played, and guests and family members alike enjoy simply hanging out within such a well-designed, comfortable space.” 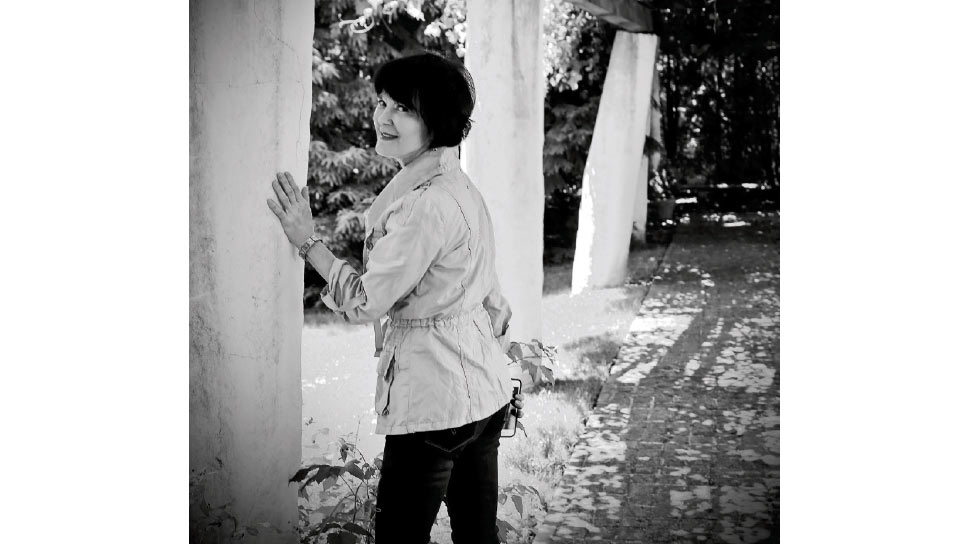 McDonnell says her family has enjoyed living in an actual work of art. She also appreciates the stories these walls have seen—including ones that go back to World War II when the Baker family relocated to Washington, D.C. so officers from the Great Lakes Naval Training Center could take refuge in the house. Historic records show this was more common than many know, as the Office of Civilian Defense encouraged Lake Forest families to relocate and make their homes available during the war effort.

Her family’s own story in the house continues, as the three children have married and now bring their 12 grandchildren to enjoy the beautiful property.

“Engagement parties and wedding rehearsal dinners were celebrated here at home,” McDonnell explains. “Everyone loves to gather in the living room which boasts an enormous fireplace with Arts and Crafts motifs, and window seats which are, again, very similar to the Ragdale living room. This Shaw cottage is truly a special place to live and dwell.”