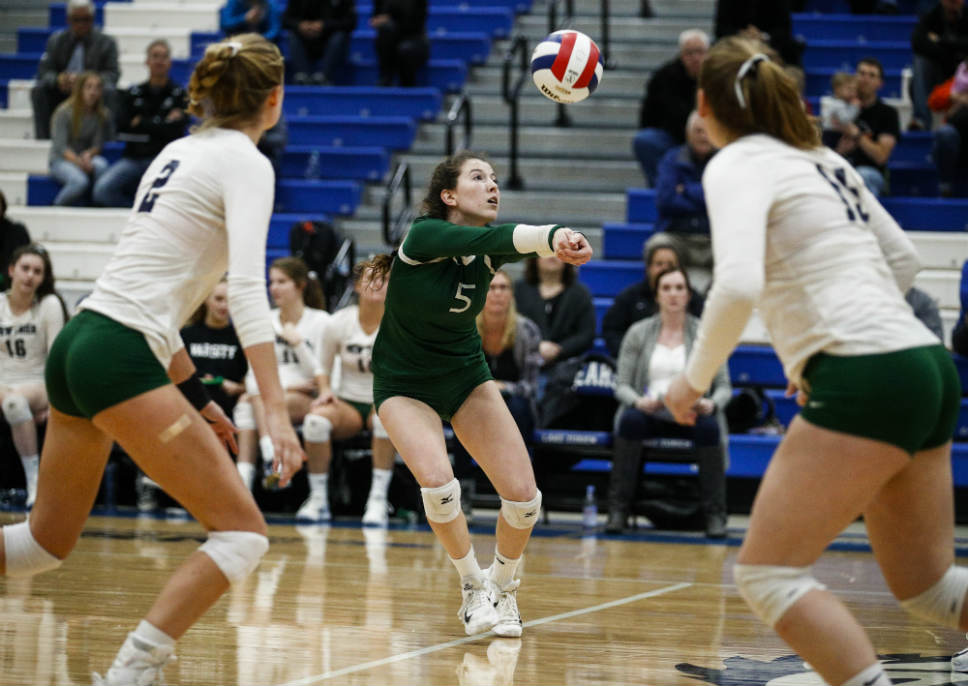 New Trier’s Julia Maisel keeps the ball alive during play in the Lake Zurich Supersectional. She had 14 digs in the match. She finished the season with 370 digs. PHOTOGRAPHY BY JOEL LERNER

NT senior libero Julia Maisel sprinted to a corner in front-row territory, left her feet and launched her 5-foot-6 frame toward the ball. (Picture a swimmer, blasting off a start block in a race).

Maisel, after another valiant effort to keep a point alive, bounced on hardwood.

The ball, alas, stayed on NT’s side.

Maisel, ever the competitor, slapped hardwood with her right hand, popped right back up and joined her teammates for a group hug.

“I played my hardest. I’m proud of how the whole team played against such a scrappy team.”

Scrappy. That’s a word most would use to describe Julia Maisel, the volleyball player. Add fiery, steady, tough, gritty, resilient, tenacious and …

“Amazing; she was amazing,” Trevians coach Hannah Hsieh said of Maisel, who missed about five matches last fall with a concussion. “I spoke with Julia afterward, and she has nothing to be down about with the way she played.”

Maisel, a co-captain (with senior outside hitter Juliana Bozzo) in 2017, has an older sister, Carly, and a younger sister, Anna. Carly attends the University of Colorado and plays club volleyball in Boulder. Anna was a freshman volleyball player at New Trier this fall.

“I love it,” said Julia Maisel, a libero since the age of 13. “You have to know, believe, that you can get to every ball as a libero. You can never be on your heels. Never. You also have to be strong mentally.”

Wherever Maisel walked after the supersectional last weekend, she had to stop. And listen. To praise.

One of the effusive supporters was Jane “Miss Mac” McNamara — a teacher, coach, administrator and super fan in the New Trier community since 1966 — who spotted Maisel, as families and friends of the players consoled the players. McNamara then approached Maisel, gripped her hands and said, “You played outstanding volleyball tonight!”

New Trier assistant Katie Hielscher scanned a sheet of paper and announced New Trier’s stats for a couple of members of the press. Shortly after reporting Maisel’s number of digs, Hielscher uttered more than a few words about Maisel, who played club volleyball with the Wildcat Juniors program.

“How great was she?” Hielscher said. “All over; she was all over the court. I’m so happy for her; we all are. Julia played great in her last match, didn’t she?”

“Her serve-receive … she was the glue back there for us,” Bodman said. “Crazy; she played crazy-good volleyball. But she played that well for us all season.”

On the day after the loss, Maisel worked out at a health club. She ran. She lifted weights.

“It took away my stress,” said Maisel, who is thinking about majoring in a science and is looking at Big Ten schools Minnesota, Wisconsin and Iowa, as well as the University of Alabama.

“Julia reads hitters well, and she’s able to do that because she’s level-headed with a calm aura,” New Trier outside hitter Taite Ryan said after NT defeated Hersey in three sets to win a sectional championship on its home floor on Nov. 1. “She’s focused, always focused. We trust Julia.

“You want to be able to trust your libero,” she added. “It’s an important position.”

The daughter of Harry — a highly competitive soccer player in his high school days — and Peggy, Maisel reflected on her four years of volleyball at New Trier last weekend.

The wins were nice, especially the ones in the postseason. The floor burns she had sustained, while hustling to make a dig? Those felt much, much better when they preceded New Trier points.

“I met so many people, wonderful people, through the sport of volleyball,” she said. “They became family to me. I learned the values of dedication and hard work through volleyball.

“A lot of great experiences with people, all because of volleyball,” she added. “I’ll always be thankful for them.”

Notable: New Trier junior middle Gillian Klise (2 aces, 2 blocks) and junior hitter Maddie McGregor each struck five kills in the Trevians’ 25-22, 25-21 loss to Crystal Lake Central’s Tigers in the Class 4A Lake Zurich Supersectional on Nov. 3. NT junior setter Payton Hielscher finished with 13 assists and two blocks. “We knew [CLC] would be scrappy,” NT volleyball coach Hannah Hsieh said. “That’s a solid team. We matched Crystal Lake Central on defense, in terms of scrappiness, and our girls hung tough. I’m proud of our girls and the way they competed tonight.” … NT (33-6) had advanced to a supersectional with a 21-25, 25-12, 25-17 defeat of Hersey on Nov. 1 in a sectional final on its home court. Klise hammered 13 kills to pace NT’s attack, with McGregor contributing seven and junior outside hitter Taite Ryan adding three to go with her 10 digs, three aces and pair of blocks. Hielscher filled up the stats sheet, notching 26 assists, five kills, four aces and two blocks. Trevians senior libero Julia Maisel bumped 11 digs. “We were really on [after the first set],” Klise said. “Our mindset from that point on was, ‘Do what we know we can do.’ The sets [mostly from Hielscher] were perfect, and our back row was amazing.” 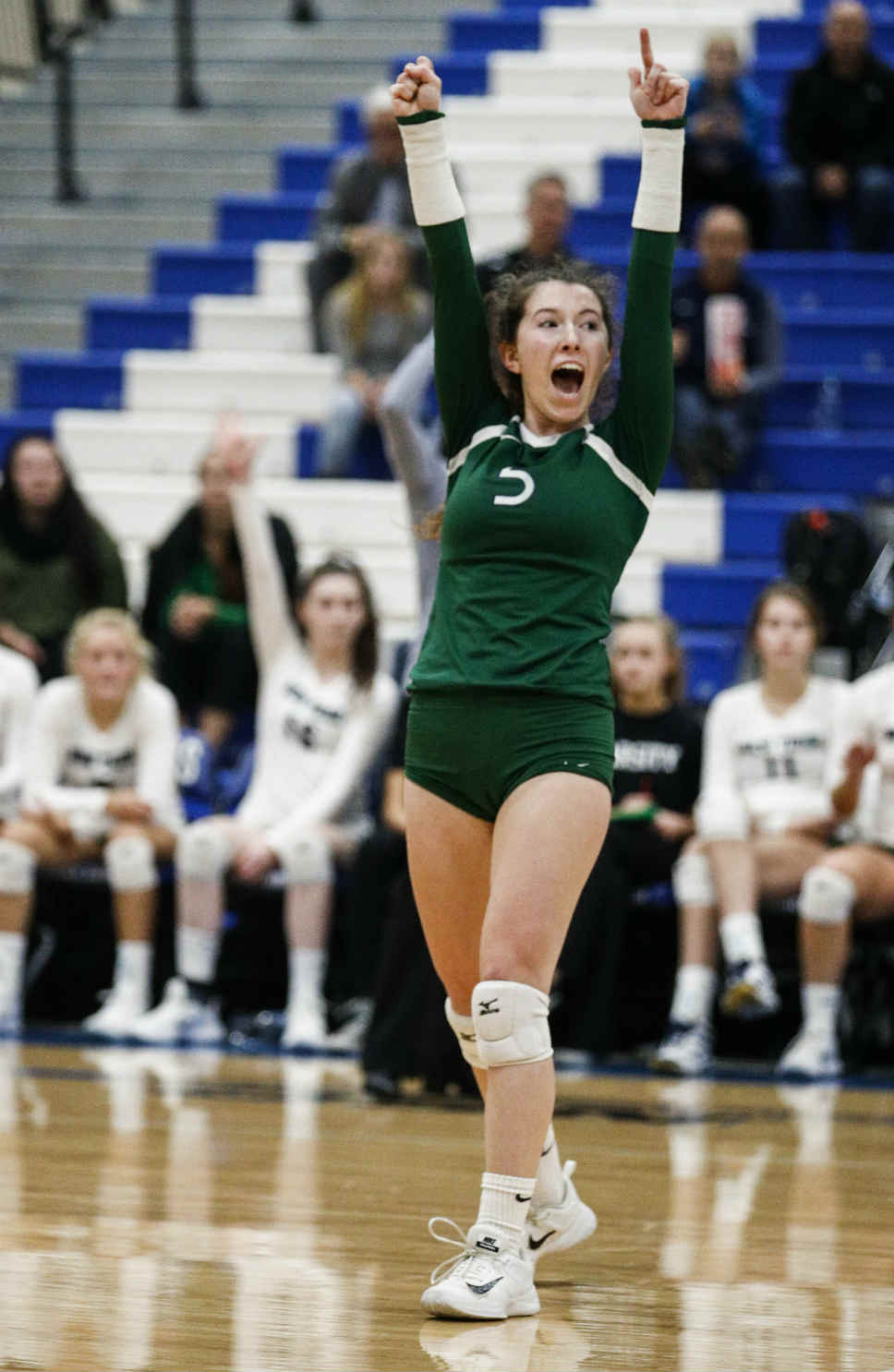 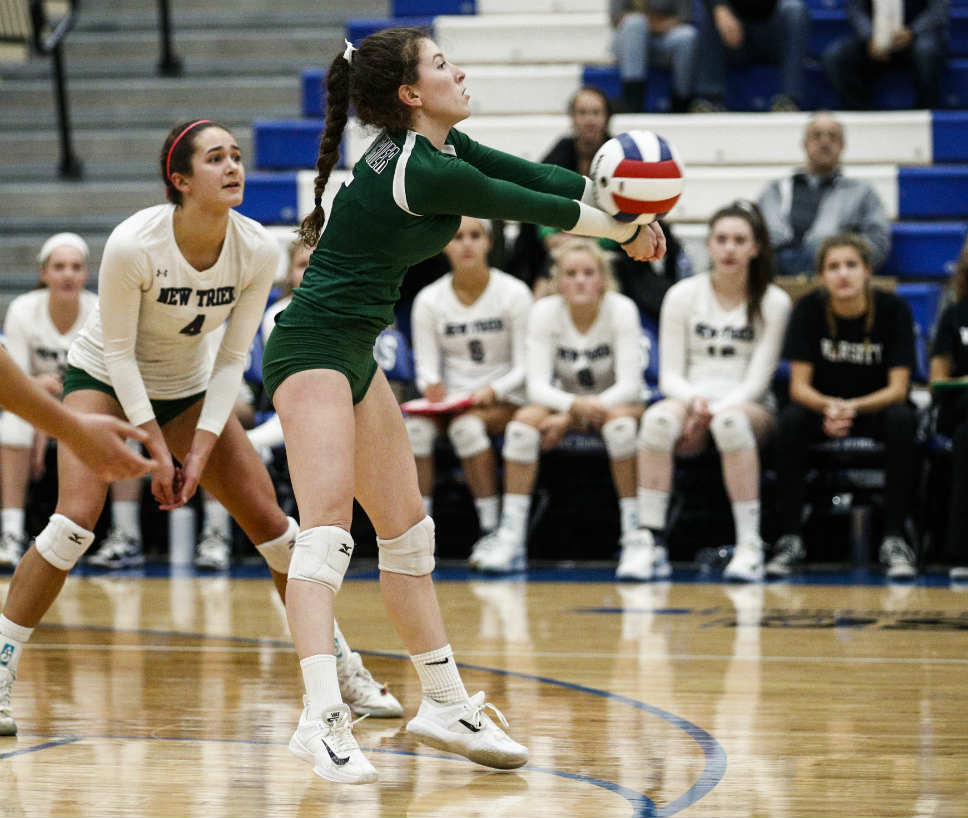 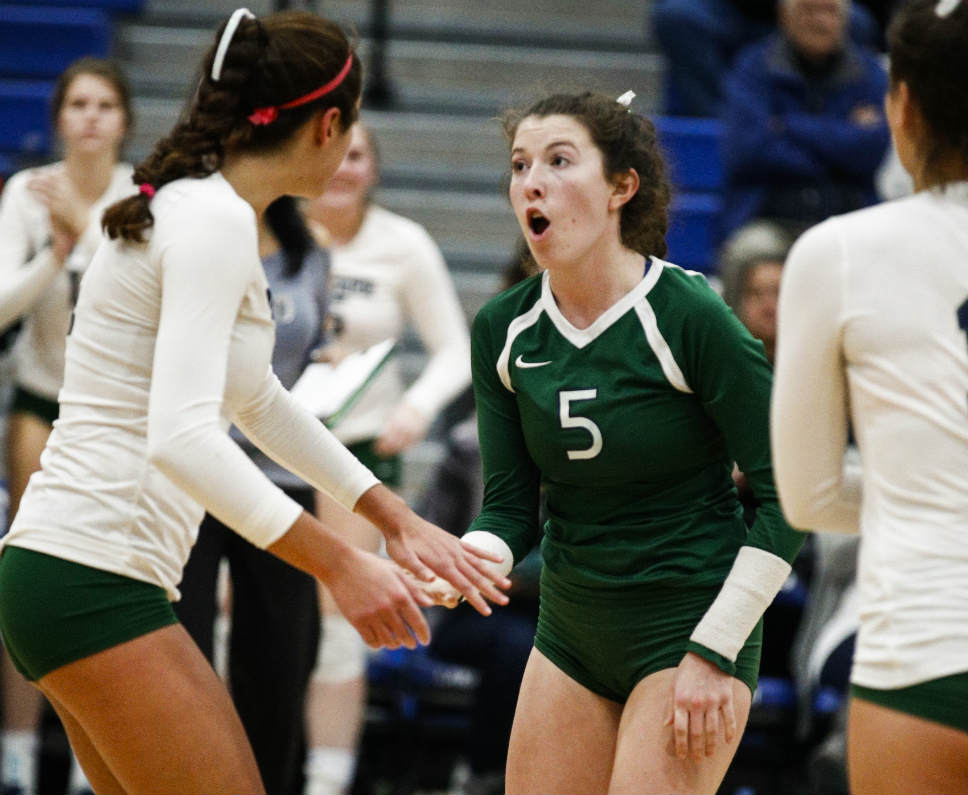