For many parents struggling to make sense of their child’s fraught teenage years, Dr. Lisa Damour’s 2016 New York Times bestselling book, Untangled: Guiding Teenage Girls Through the Seven Transitions Into Adulthood, has been a valuable handbook.

At Lake Forest Country Day School, where Dr. Damour addressed an audience of more than 200 parents on October 26, Untangled is so highly regarded that Damour – a clinical psychologist and director of Cleveland’s internationally renowned Laurel School for Research on Girls – has achieved rock star status among the faculty. 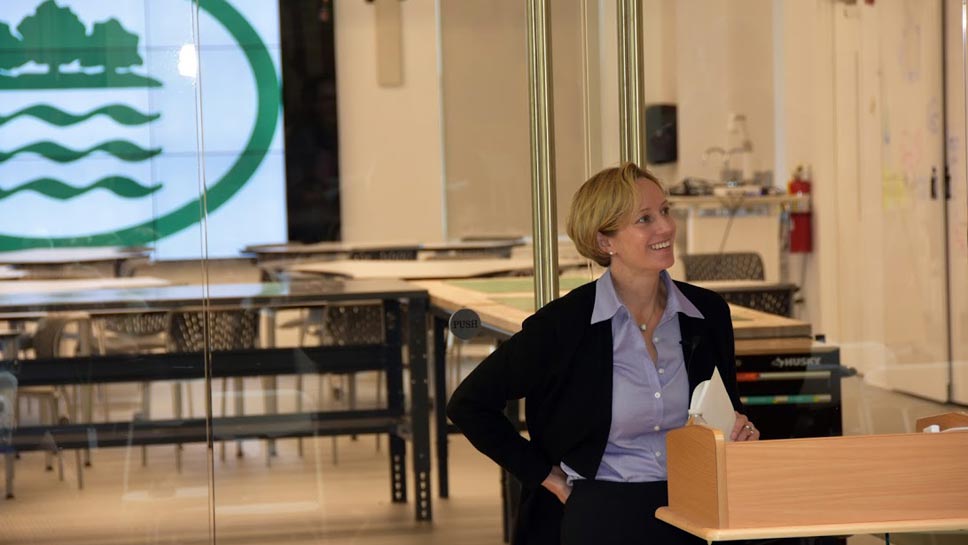 “We talk about her like she’s Jon Bon Jovi,” joked Dr. Bob Whelan, LFCDS’s head of school. “I consider her one of the great minds in human development.”

During her hour-long lecture, Q&A, and book signing at the school, Damour lent an equal measure of humor and wisdom to the subject of raising teenage girls as she walked the audience through the “seven tasks of growing up.” Damour quickly dispelled the notion that difficult teenage behavior is the sign of an underlying problem.

“There is a checklist of things that kids have to do during the normal course of development,” said Damour. “They are inherent to being a teenager.”

The task of “Parting with Childhood,” said Damour, happens when a child aged 11-12 unconsciously realizes he/she is only six years away from heading off to college. A girl who once freely socialized with parents and siblings will now retreat to her bedroom and close the door, leaving many parents feeling “dumped.” In reality, said Damour, that rejection is merely a young girl’s natural need to break away.

‘They start to practice leaving,” said Damour, a mother of two girls. “What they start to think is, ‘my room is my apartment and you are the landlord who inexplicably knocks.’”

On the subject of friendship, a chapter in Untangled entitled “Finding a New Tribe,” Damour insists the happiest kids have only one or two close friends.

“Big groups are stressful,” said Damour. “Numbers bring drama. At any human age, you cannot find five people, put them in a group, and have them all like each other equally. It’s not possible…and yet 7th graders attempt this.”

A child’s task of “Harnessing Emotions,” peaks at around 13, according to Damour. It’s a phase characterized by frequent complaining to parents, often in the immediate aftermath of school.

“School is long and hard under the best conditions,” said Damour. “All day long, kids are collecting emotional trash. Bad things happen and they just jam it in their pocket. They hold it together. And then you pull up and ask ‘How was school?’ You become their trash bag. You let them clear out their pockets.”

Leaving their “trash” at home, Damour explained, enables children to go back into school the next day and deal with people and problems.

Damour said children typically begin the task of “Contending with Adult Authority,” around the age of 11.

‘This is when they begin to see through us,” said Damour. “You know the scene from the Wizard of Oz when Toto pulls back the curtain and Dorothy can suddenly see that the great and powerful Oz is just this guy frantically pulling levers? That’s what it’s like to be 13 or 14.”

Above all, said Damour, parenting a teenager is hard. A healthy perspective, taken with a strong dose of laughter, is the key to surviving those long, rough years.

“If you do not have a sense of humor about yourself, you have to get one now,” said Damour. “You cannot successfully parent an adolescent without one. I really mean that.”