Fritzie Fritzhall was 13 when she entered Auschwitz, the World War II concentration camp in Nazi-occupied Poland that the German government used to hold and execute Jews and others whom they considered “enemies of the state.”

Her grandfather died in the dank, cramped cattle car en route to the camp, and her younger brothers were sent to the gas chamber soon after arriving there. In the chaos of the night, trying to adhere to rules being shouted in German (a language the prisoners didn’t speak), Fritzhall told her mother she thought she was expected to be in a different line. Fritzhall went to a labor camp. Her mother went to the gas chamber.

Fritzhall survived the Holocaust—but she couldn’t talk about her experience at Auschwitz for decades, until she was a grandmother and her son implored her to tell them what happened. Now she is featured in a groundbreaking, three-dimensional holography film at the Illinois Holocaust Museum & Education Center, and her story — in her own voice — will survive in perpetuity.

Fritzhall is one of 13 Holocaust survivors featured in holography movies for the Survivor Stories Experience developed by USC Shoah Foundation. The holograms are one of several aspects of the Illinois museum’s new, multi-million dollar Take A Stand Center, an immersive, permanent exhibit on social justice that opened October 29. In Fritzhall’s hologram movie, she appears to be sitting on a stage in a theater at the museum, speaking directly to the audience about her family’s tragic experience. The interactive holograms are programmed to answer up to 30,000 questions from the audience.

In addition to the Abe & Ida Cooper Survivor Stories Experience, visitors to the museum will experience the Goodman Upstander Gallery, which extends the message beyond the Holocaust to showcase 40 courageous “Upstanders” in civic, social, economic and environmental rights. They also will see the action-oriented Take a Stand Lab, which provides hands-on tools for affecting change and becoming an Upstander, including a toolkit for visitors to take home.

The Illinois Holocaust Museum is the only museum in the world to feature the holography films, said Susan Abrams, museum CEO. “Seven of the survivors are affiliated with the museum in Skokie, and were selected not only for their outstanding ability to share their stories and experiences, but also for the diversity of their experiences,” said Abrams.

Frizthall, 88, is president of the Illinois Holocaust Museum & Education Center. In her holography, she explains her story:

Soon after arriving at Auschwitz, the women were lined up. Fritzhall told her mother she thought she needed to be in a different line from hers – and she never saw her again. Later when she asked where her mother went, other prisoners pointed to the smoke stacks.

Fritzhall said she lived for decades with that burden – it was one of the reasons she was unable to talk about her experience for so long.

In the camp, Fritzhall found her aunt, who protected her until she, too, disappeared. Fritzhall then spent nearly two years in the camp’s slave labor factory with nearly 600 “beaten down and hungry” women. Every moment, she wondered if she would survive another hour, another evening.

“Because I had youth in my favor, the women allowed me extra rest, covered for me and took care of me,” said Fritzhall. “At night when that little piece of bread came, that little crumb could have changed their lives for another day, but they were willing to give it to me, so that someone could carry the message.”

More than 450 students visit the Illinois Holocaust Museum every day. Fritzshall believes her message will live on through them.

After her holography film was completed, Fritzhall saw it with a class of students visiting the museum who didn’t know she was in the audience. “I listened to these young students asking questions, and this is when the light went on,” said Fritzshall. “That’s when I realized what we’re leaving behind.”

“I am so proud of what we’ve done. This is a way of reminding the world what happened, so it doesn’t happen again,” said Fritzhall.

The Illinois Holocaust Museum & Education Center has 400 docents and volunteers, and is located at 9603 Woods Drive in Skokie. The exhibition and holographic theater experience are free with the museum admission, but the museum recommends making reservations ahead of time. For more information visit: ilholocaustmuseum.org . 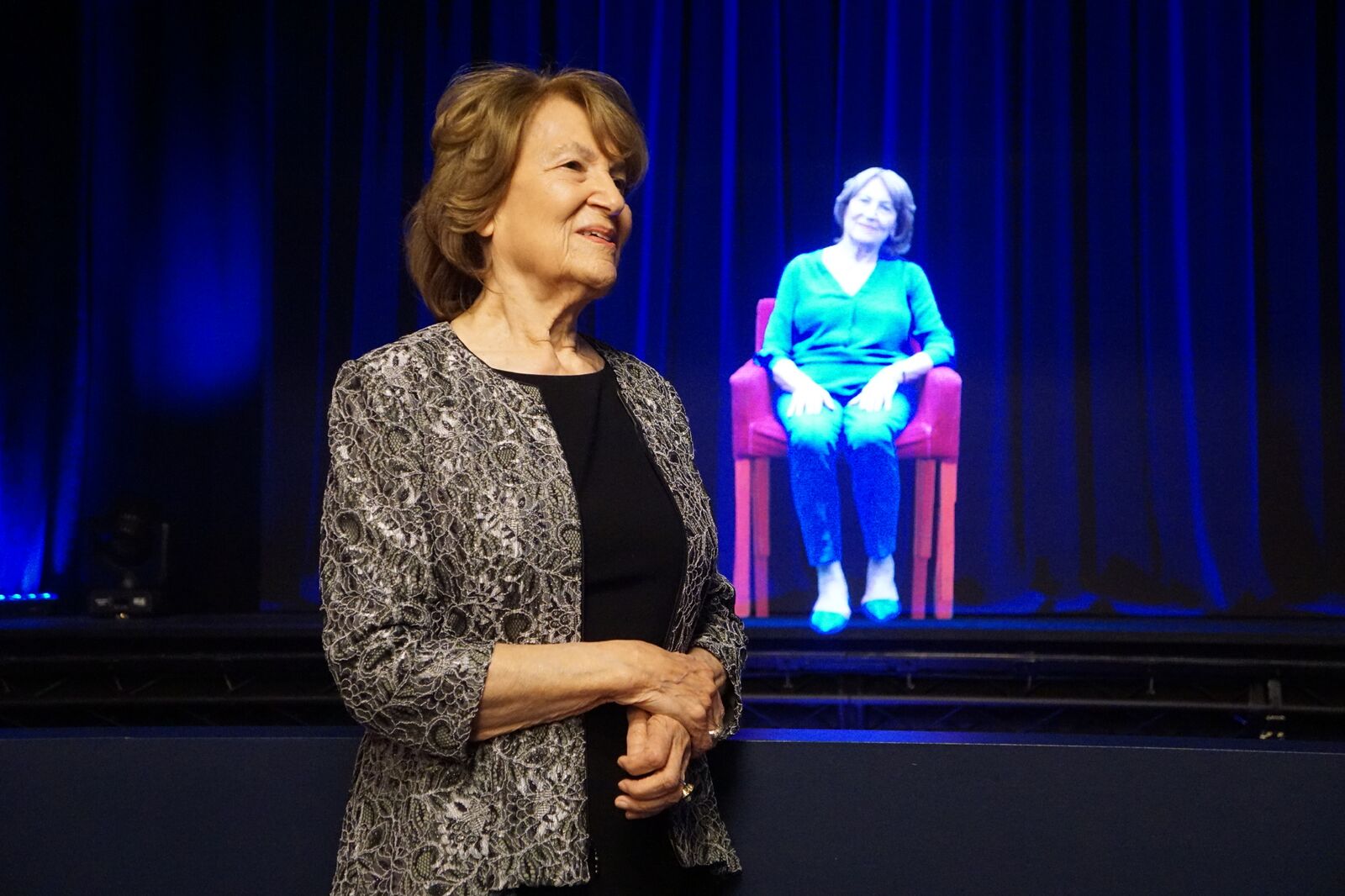 Holocaust survivor Fritzie Fritzhall with her hologram at the Illinois Holocaust Museum & Education Center, of which she is president. 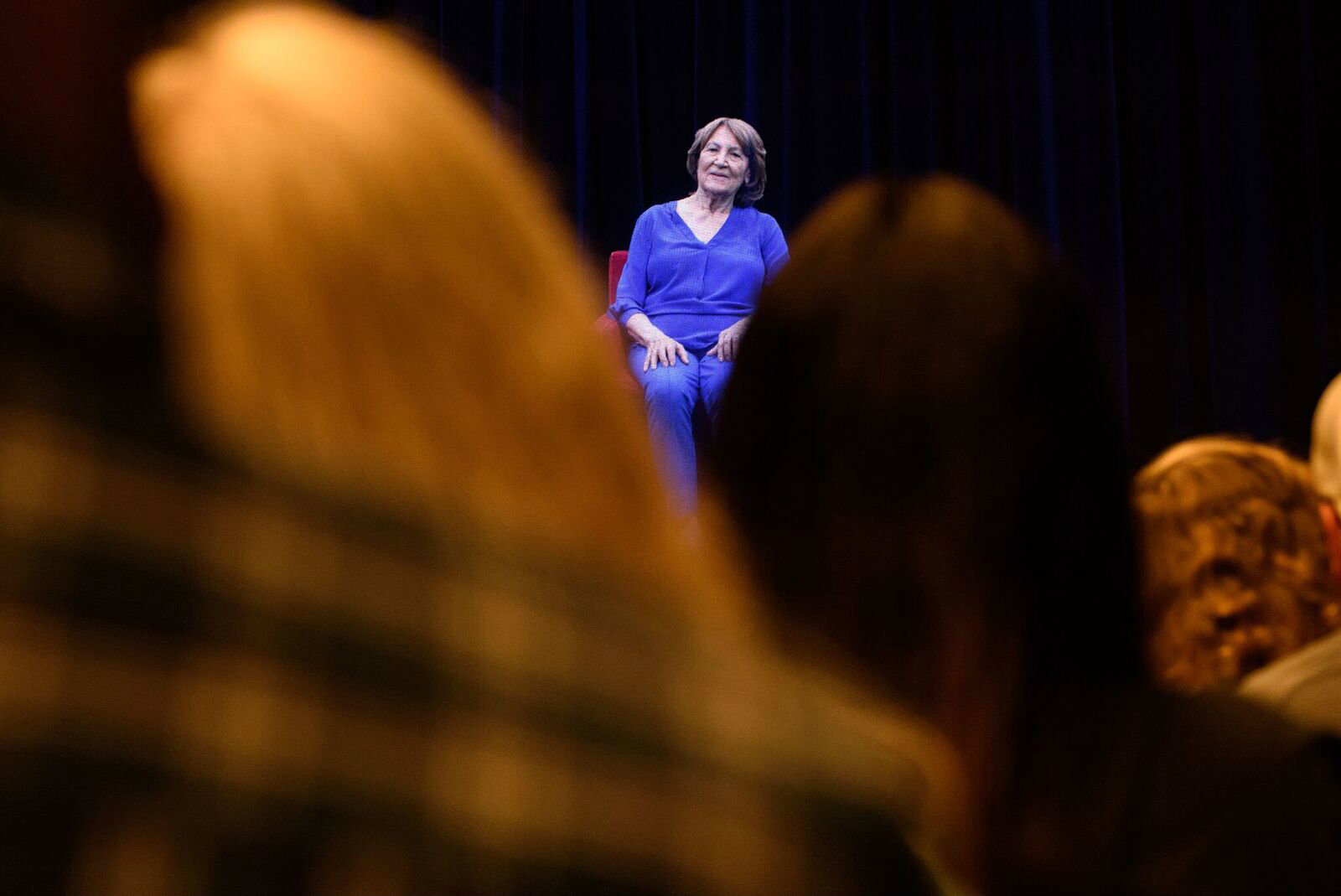