When Chicago filmmaker John Davies began doing research for his 2016 television documentary Heroes on Deck, the little-known story of a World War II aircraft pilot training program that took place on Lake Michigan, he stumbled on an intriguing statistic that sparked a big idea for his next film.

“Possibly as much as 30% of all U.S. material used to support the war effort was manufactured in and around the City of Chicago,” said Davies. “That included a range of items like food, parachutes and tanks.”

Inspired by the notion that Chicago played a unique role in WWII, Davies set to work producing the one-hour documentary A City at War: Chicago narrated by A&E crime show host and Lake County resident Bill Kurtis. After premiering on November 9 at 8 p.m. on WTTW, Chicago’s public television station, the film will air to a national audience next May on Memorial Day.

“We’re hoping this will be the first in an eight-part series featuring all the U.S. industrialized cities,” said Davies.

Davies and his co-producer, Brian Kallies, recently screened the documentary to a large crowd of friends and supporters on October 18 at the Gene Siskel Film Center, giving special thanks to the film’s sole underwriter, Captain Dave Truitt, chairman of the Chicago Marine Heritage Society. Truitt also funded Heroes on Deck.

“If it’s got anything to do with Chicago’s history or the subject of math, Dave is interested,” joked Davies. 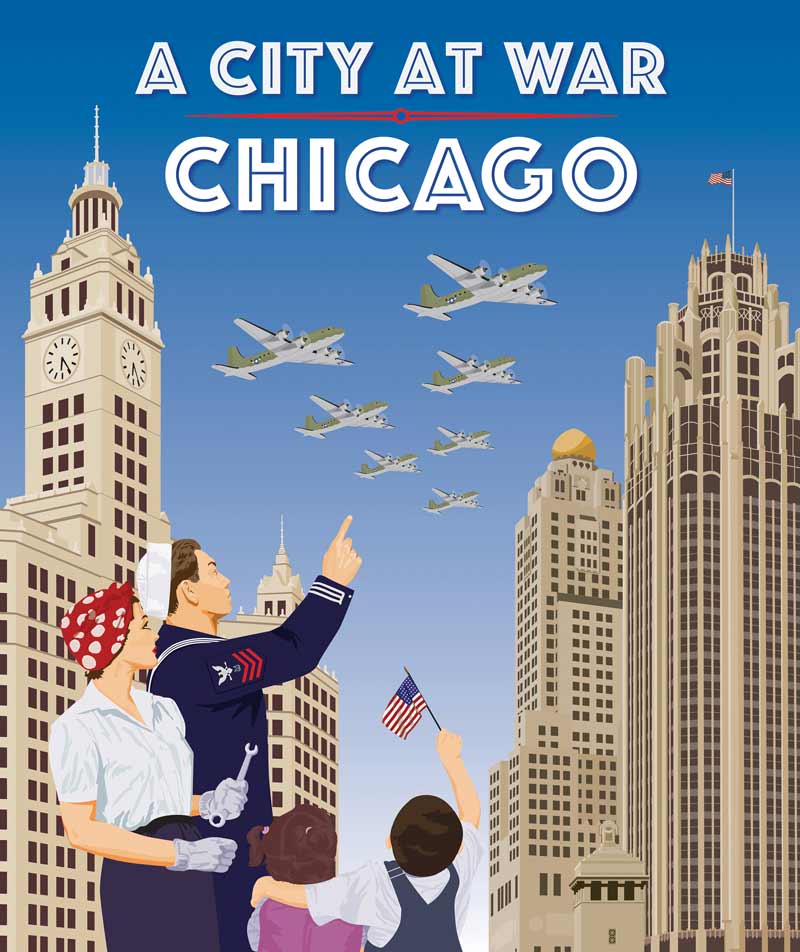 Using research, period footage and stills collected from the Library of Congress, national archives, and personal collections, as well as the eye witness testimony of 20 people, A City at War: Chicago, paints a compelling portrait of the Windy City at the time of FDR’s famous “arsenal of democracy speech,” when 1,400 local factories were transformed into production depots for arms, ammunition, and machinery used in the Allied war effort. During WWII, Chicago-based toy-wagon maker Radio Flyer began manufacturing the “Blitz Can,” a five-gallon steel container mounted on the backs of jeeps and tanks to transport water and fuel to overseas troops; Kraft Foods in Northfield shipped millions of pounds of cheese each week to the UK.

“Local citizens were told to roll up their sleeves, and that included every man, woman and child,” said Davies. ‘This was the era of ‘Rosie the Riveter,’ when women entered the industrial workforce for the first time.”

On the streets of Chicago, where an estimated seven to eight residents from every block served in the military, neighborhood kids became “scrappers,” collecting bits of rubber, old tires, tinfoil, and anything of value to feed the war machine.

“These weren’t just teenagers,” said Davies. “They were little kids.”

Further north, Fort Sheridan operated as an administrative hub for 21 POW camps across the State of Illinois – at one time housing as many as 4,000 German, Japanese and Italian prisoners of war. A City at War: Chicago recounts the memories of local children who lived nearby.

“Kids would wait for the prison trucks moving in and out of the gates,” said Davies. “They would wave to the Germans, but were afraid of Japanese soldiers …”

“With that many young personnel in one place at one time, prostitution became a big business,” said Davies.

At nearby Glenview Naval Air Station, now The Glen Shopping Center, 15,000 carrier pilots trained before heading to the Pacific.

‘These pilots would typically receive one day of classroom training followed by one day of flight exercises,” said Davies. ‘They’d fly out onto Lake Michigan to practice landing on aircraft carriers.”

“They would rendezvous there and await further instructions,” said Davies.

Chicago’s elite universities also played a critical role in the national war effort. Northwestern University trained thousands of naval officers at midshipman school while quietly producing reels of war propaganda films for national distribution. And just a short distance away, at the University of Chicago, The Manhattan Project was being conducted under a veil of secrecy.

A City at War: Chicago benefactor Dave Truitt – who grew up in Hyde Park near the University of Chicago campus – vividly recalls the whirring, subterranean noises that mysteriously emanated from the university’s Metallurgical Laboratory, located underground in the squash courts of the since demolished Stagg Field.

“At the time, we had no idea what was going on,” said Truitt. “It was only later that we realized it was an atomic reactor.”