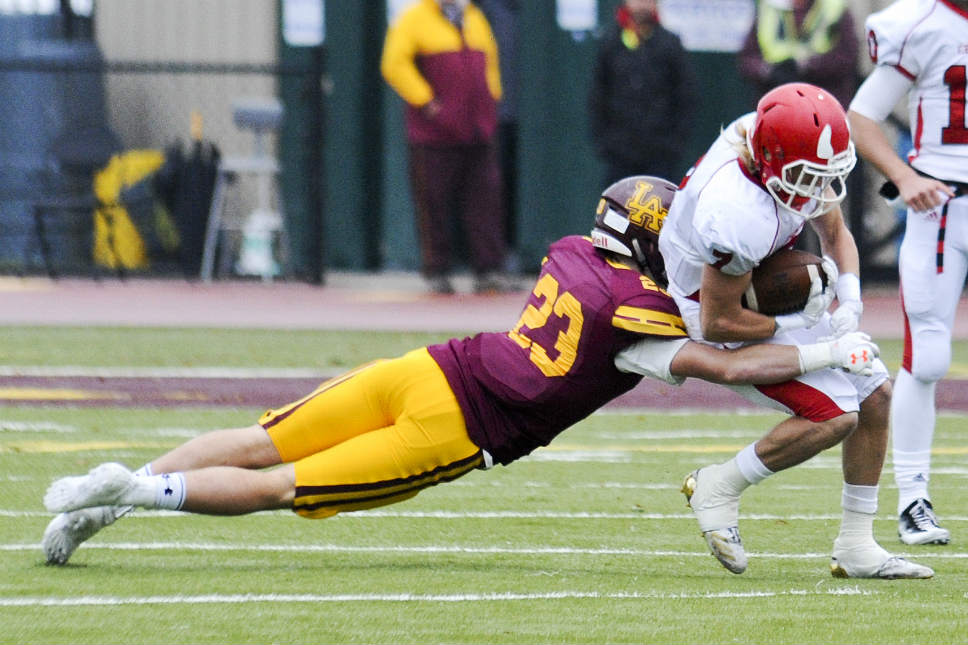 Is it at full capacity? Nah. Never.

Hugh Kelly proved to be that one more for the Ramblers on Nov. 4. He came up with a strong performance in LA’s 28-7 victory over visiting Hinsdale Central in the second round of the Class 8A state playoffs.

Making a rare start, Kelly opened the game in explosive style. He set the tone by collecting five tackles (4 solos), including a three-yard tackle for loss, on the opening series of the game. No. 23 in your program finished the contest with seven tackles.

“He’s a determined kid,” said LA head coach John Holecek. “He plays physical. We could tell that, when we saw him last year.”

Playing behind two prized safeties — all-conference selections Charlie Largay and Jake Gonzalez — has a way of cutting into a player’s playing time.

But, Holecek and his staff wanted the hard-hitting Kelly out there against the Red Devils (8-3). With senior cornerback John Lynch ailing, the Ramblers moved some pieces around. Largay was moved to corner to open up a spot for Kelly.

Kelly is not exactly a newbie. He finished the regular season with 31 tackles (17 solos, 14 assists).

“He’ll be one of the focal points of our defense next year,” said Holecek.

Meanwhile, senior John Costello got the start at inside linebacker. And like Kelly, No. 10 had himself a day, amassing eight tackles, including two on special teams.

Costello, who has made a number of starts this fall, is no stranger to the LA stat sheet. He finished the regular season as the team’s fourth-leading tackler (47) behind Anthony Rodriguez (67), Christopher Scott (64) and Gonzalez (61).

“It’s good to be able to put in players like Kelly and Costello into the game,” said Holecek. “Two guys who can really hit.”

Due to a bruised knee, Rodriguez opened the game on the sideline. But the senior all-Chicago Catholic League linebacker didn’t stay there. He entered the game late in the second quarter and played a big chunk of the second half.

“We should call him Lazarus,” said Holecek. “He didn’t practiced all week [because of the injury].

“He heals quickly,” the coach added.

Rodriguez, as usual, ended up being a difference-maker. He had four tackles, including a four-yard quarterback sack and a six-yard tackle for loss.

Notable: With the victory over Hinsdale Central, LA’s John Holecek picked up career win No. 133. That ties him with legendary coach John Hoerster. … The Ramblers will face undefeated Marist (11-0) in the state quarterfinal round next weekend. Marist topped Curie 37-14 in second-round action on Nov. 4. 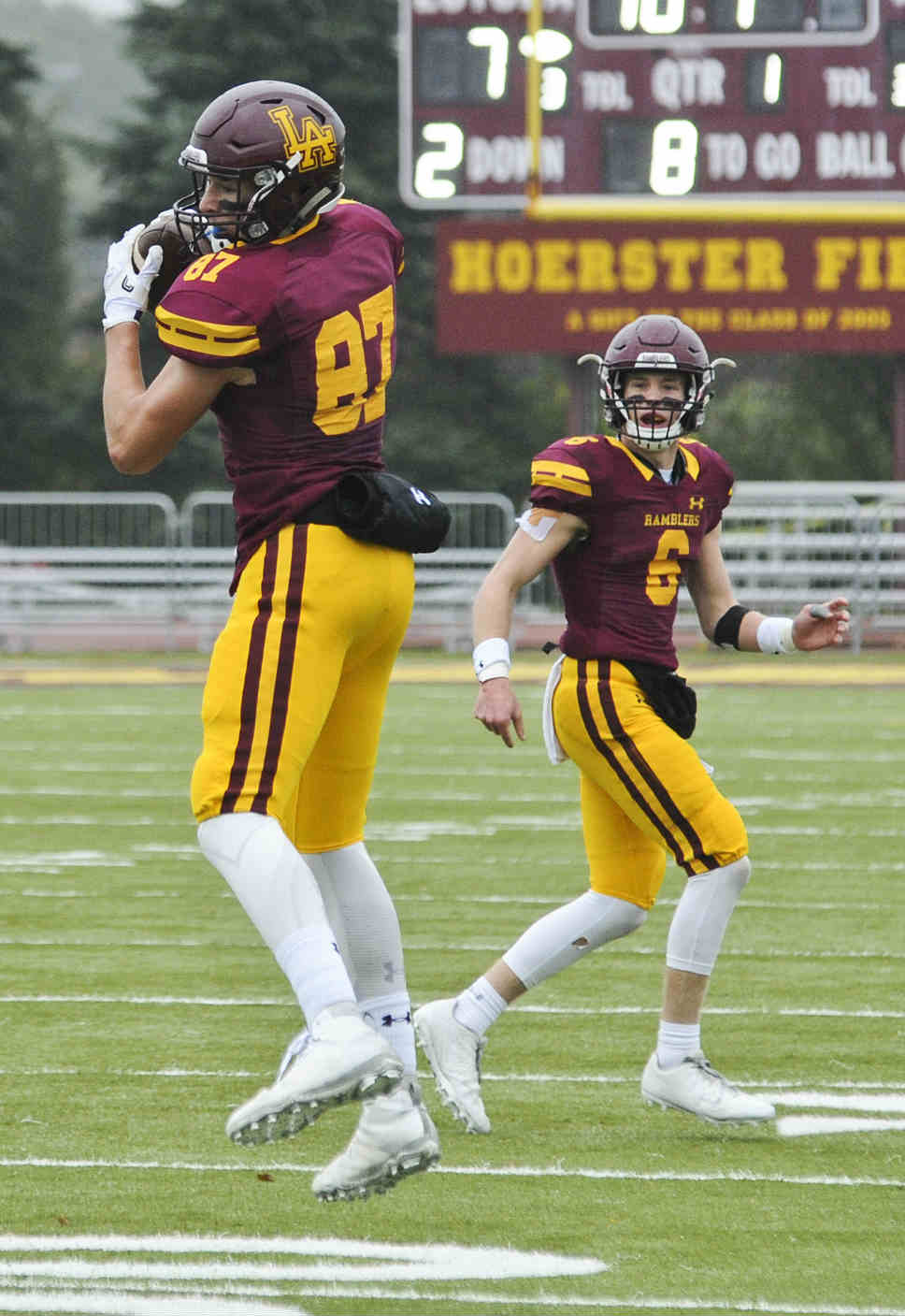 Charlie Gilroy of the Ramblers hauls in a touch pass from quarterback Quinn Boyle. PHOTOGRAPHY BY GEORGE PFOERTNER 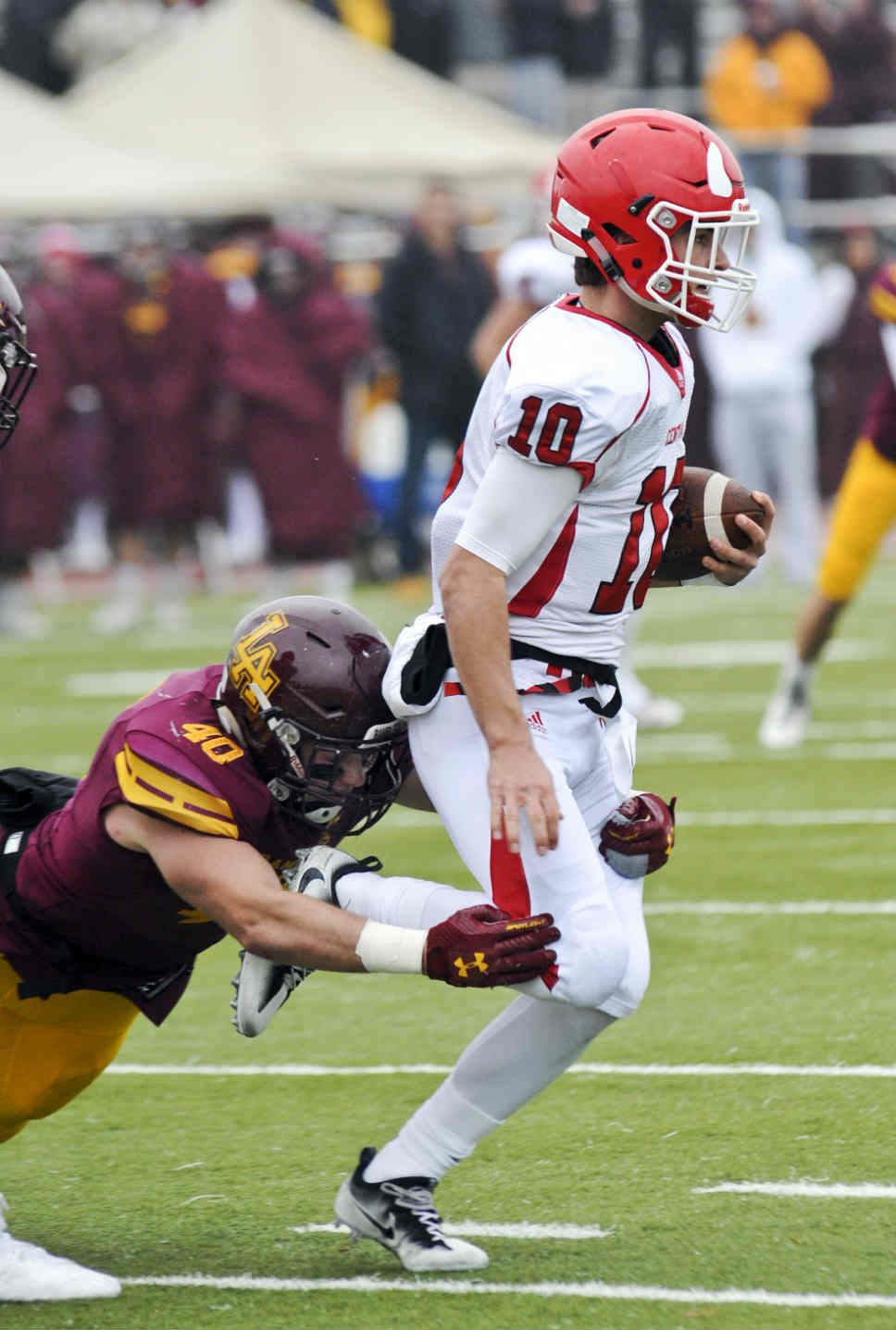 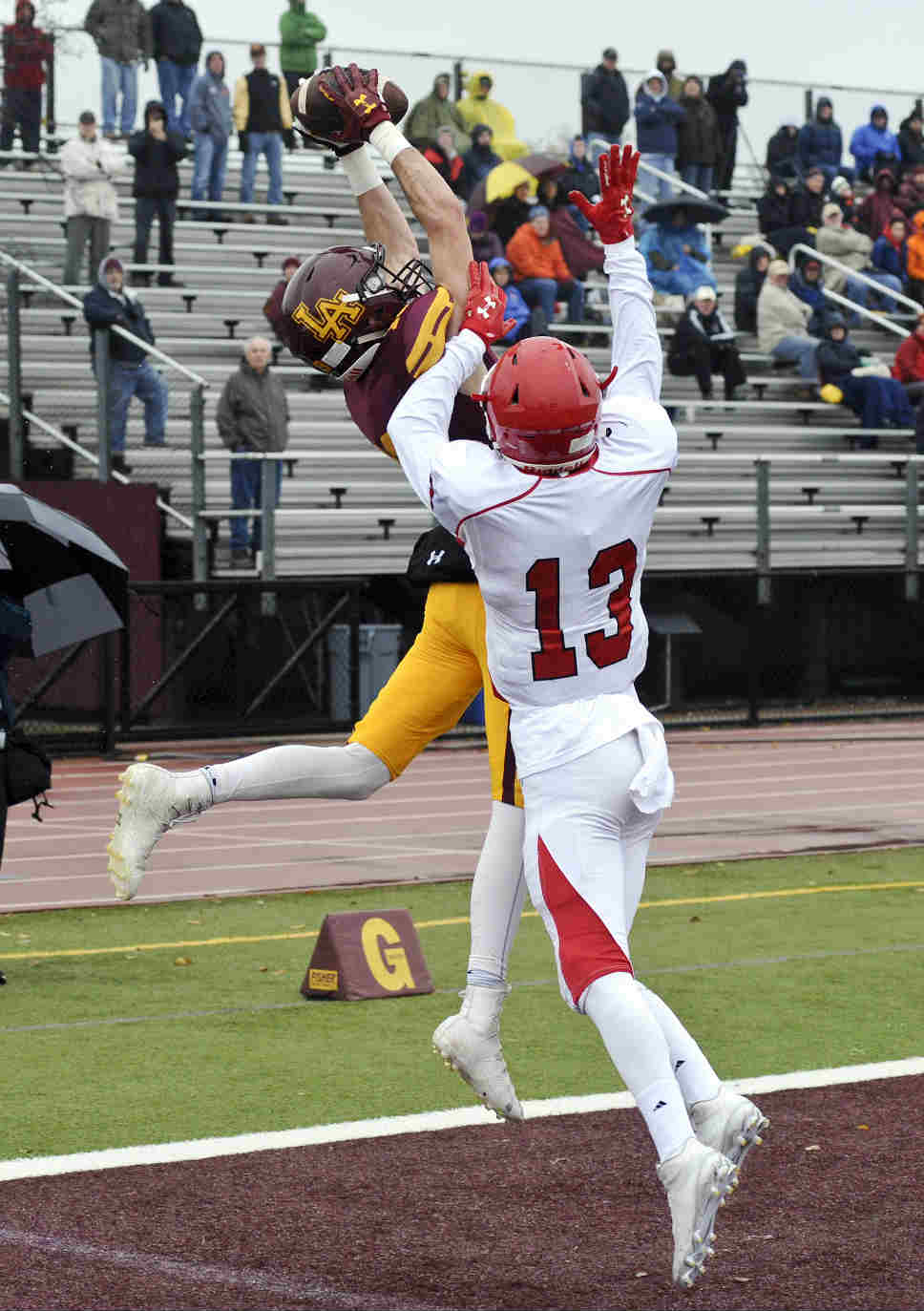 LA’s Rory Boos leaps high to complete an 8-yard TD catch in the first half. PHOTOGRAPHY BY GEORGE PFOERTNER 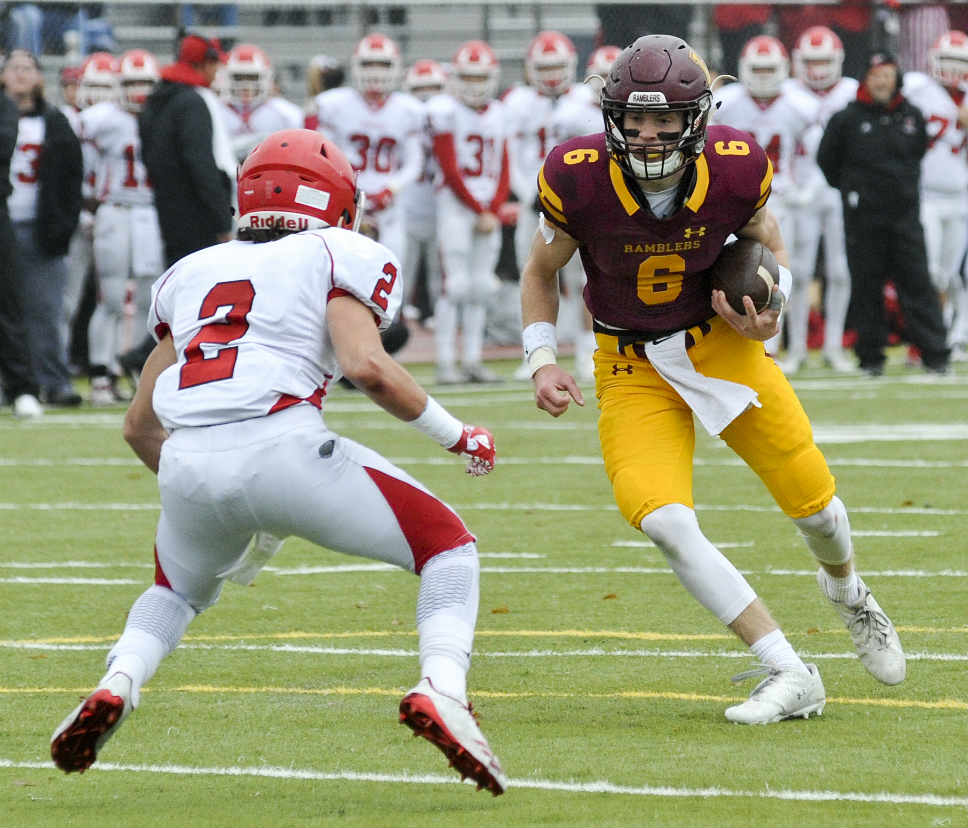 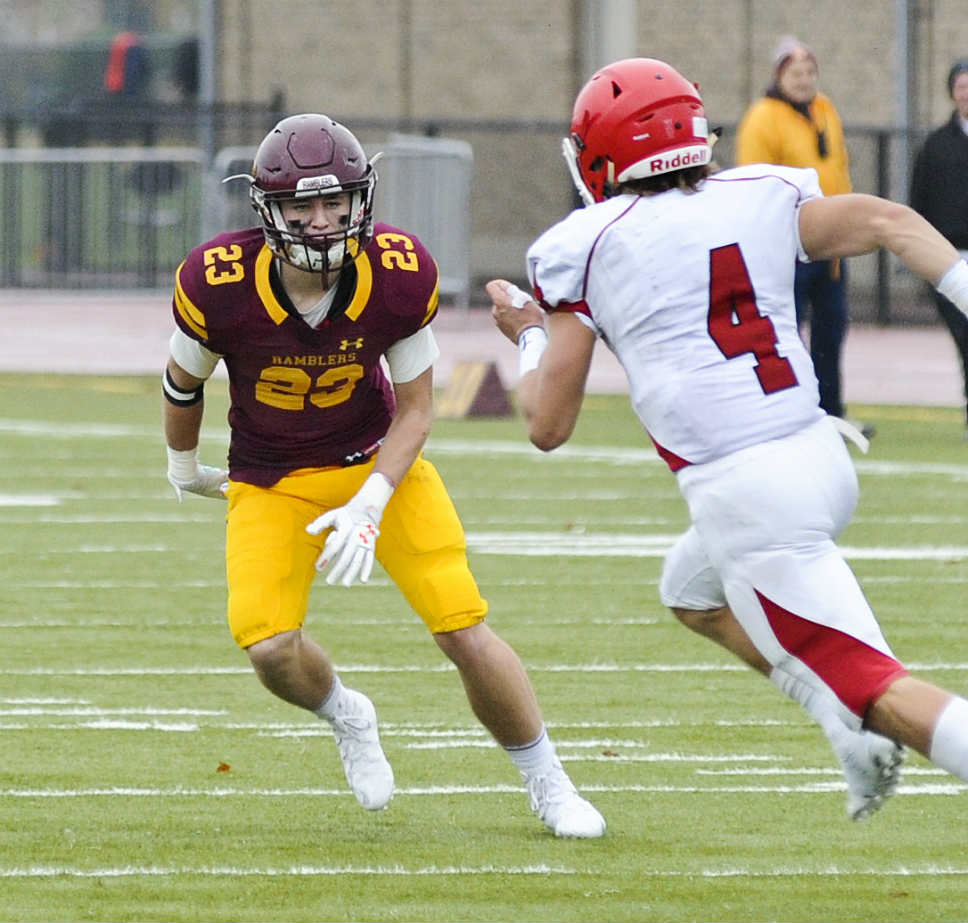