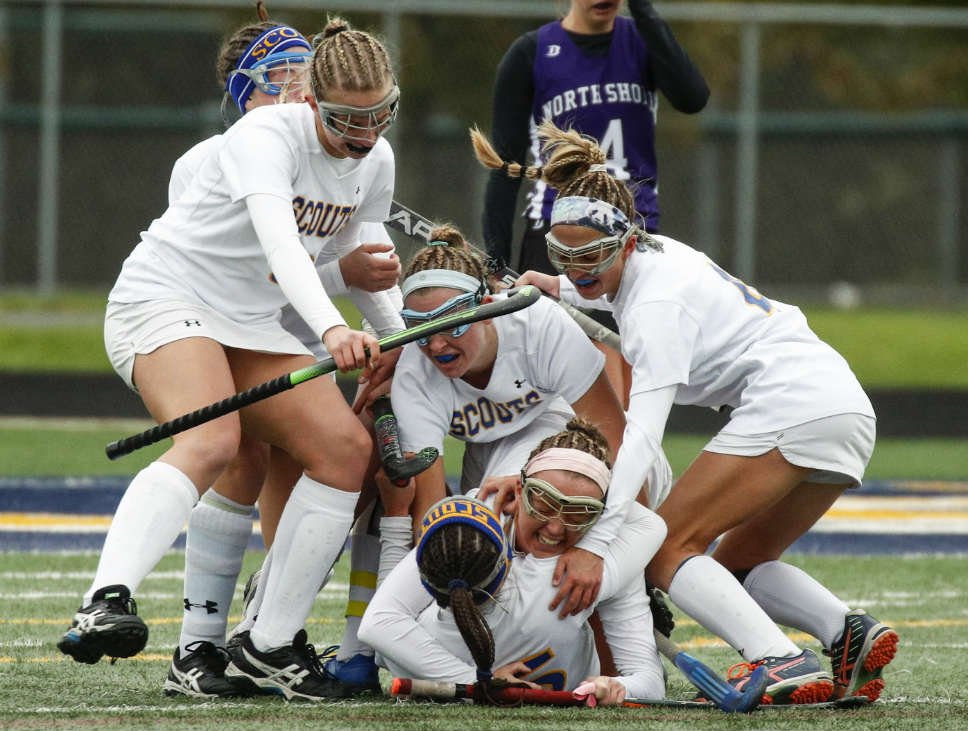 Lake Forest’s Cat Nicholson (bottom) is tackled by teammates after scoring a goal to put the Scouts in front 2-0 in the state field hockey tournament. PHOTOGRAPHY BY JOEL LERNER

An avalanche of her Lake Forest High School field hockey teammates, that is. The midfielder and University of Iowa recruit had just scored a goal — a tally, with 10:41 left in regulation, that put the top-seeded Scouts up 2-0 in the second half of the Illinois High School Field Hockey state championship game against North Shore Country Day — when all of her on-field teammates swarmed her and seemingly crushed her on the Glenbrook South turf Oct. 28.

It looked a lot like a sea of linemen and linebackers attempting to stop a running back at the goal line.

So did their talented target.

The difference between a 1-0 lead and a 2-0 advantage in an evenly matched field hockey game is huge.

“Had Cat broken a leg during the celebration, she would have fought to keep on playing,” Scouts first-year head coach Cat Catanzaro cracked after LFHS (19-1) successfully defended its title with a 2-0 victory and captured its fourth state championship in six years and 13th overall.

“Cat,” the coach added, “was the heart of this team. The heart and soul of it, actually, on and of the field.”

Nicholson weathered that avalanche on a cloudy, brisk day.

She faced a flurry of NSCD shots on goal in a pivotal stretch in the second half, kicking away a threat at the end of a tense sequence to stymie a game bunch of Raiders (19-3), seeded third and blessed with three Division I recruits — Jessica Hourihane (Ohio State), Xas Morgan (University of Virginia) and goalie Abby Renaud (Northwestern).

Canty & Co. had blanked Glenbard West 2-0 in a state semifinal on the same field on Oct. 26, avenging a 2-1 regular-season loss.

“Barbara played a great game,” Catanzaro said after the final. “That was her best game of the season, without a doubt. She hadn’t been challenged a lot this season, but today her adrenaline was up, was going. She was focused. Outstanding; she was outstanding.”

Scouts sophomore midfielder Gracie McGowan — fast and savvy and indefatigable — opened the scoring in the championship tilt with an unassisted goal, from about 10 yards out, at the 19:56 mark of the first half.

“Amazing, isn’t she?” Catanzaro said after the LFHS-Glenbard West semifinal. “Gracie has good field sense. So smart, too.”

Scouts junior forward Maggie Mick praised Catanzaro for her knowledge of field hockey and for her communication skills. The subject of her older sister, Mackenzie Mick (LFHS, 2014), also surfaced after the title game.

“I’m as competitive as she is,” said Maggie Mick, now halfway to matching her sister’s state-championship-medal haul.

The Raiders had advanced to last weekend’s title game with a taut, thrilling 2-1 double-overtime defeat of New Trier in a semifinal on Oct. 26. The school’s split their two regular-season meetings.

But nobody came up bigger in that semifinal than sophomore Caroline Segal did. Still fairly new to the sport — Segal went out for field hockey last year because all of the students at the school go out for a fall sport — she scored the clinching goal in the second overtime against the Trevians.

Segal, with 5:45 remaining in the second extra session, then blasted the shot that vaulted the Raiders to the title game.

“Caroline is a workhorse, with great speed,” Raiders coach Alyssa Dudzik said of the team’s leading scorer. “Such a scorer; she knows how to finish. She’s having fun with field hockey, and she’s soaking up everything about it.

“Caroline,” the coach added, “was on the sideline for most of the second overtime. One of my assistants [Mullery Doar] came up to me and said, ‘We have to put Caroline back in there.’ ”

NT bowed 2-1 in double OT to North Shore Country Day in a semifinal on Oct. 26 and fell 2-1 in overtime to Glenbard West in the game for third place two days later.

“Bummer,” Trevians coach Stephanie Nykaza said. “We had our chances in both games; we just couldn’t capitalize. It’s not for lack of effort. It’s the way the cards fell.

“We had a very successful season. It’s hard to get her [the Final Four].”

NT sophomore midfielder Grace Harris scored the goal to knot it at 1-1 — with only 3:06 left in regulation — in the lengthy, entertaining clash with NSCD. Two days later, Trevians senior midfielder Jenn Kirby it a 1-1 game with her goal in the second half against Glenbard West. 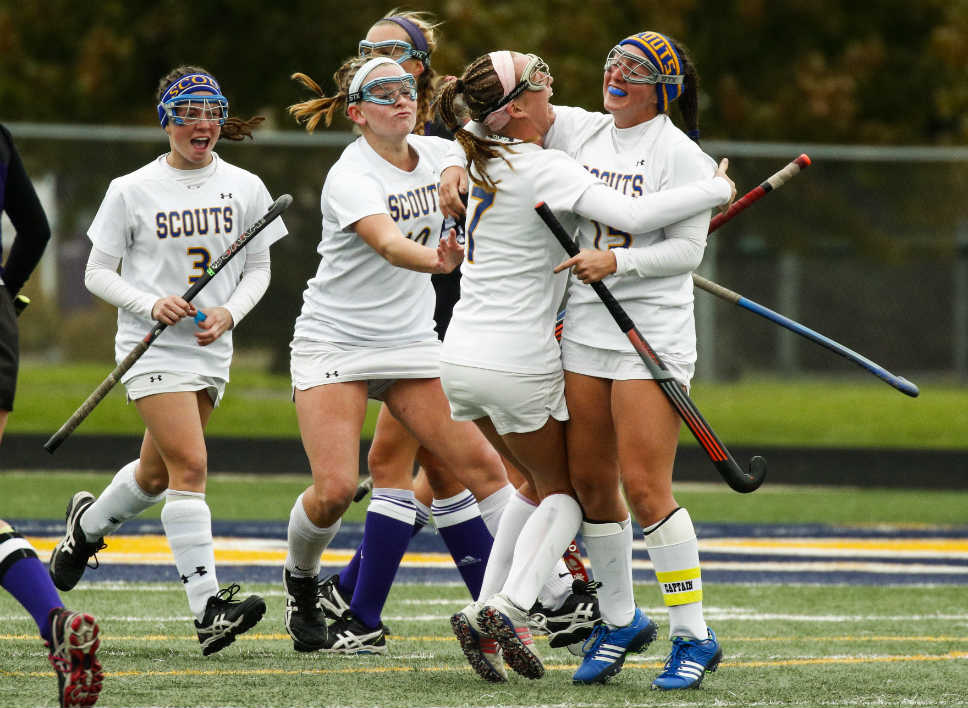 Lake Forest’s Cat Nicholson (right) is greeted by teammates, including Julie Hender (No. 3), Maggie Mick (No. 10) and Logan Hanekamp (No. 77), after scoring and putting her team ahead 2-0. PHOTOGRAPHY BY JOEL LERNER 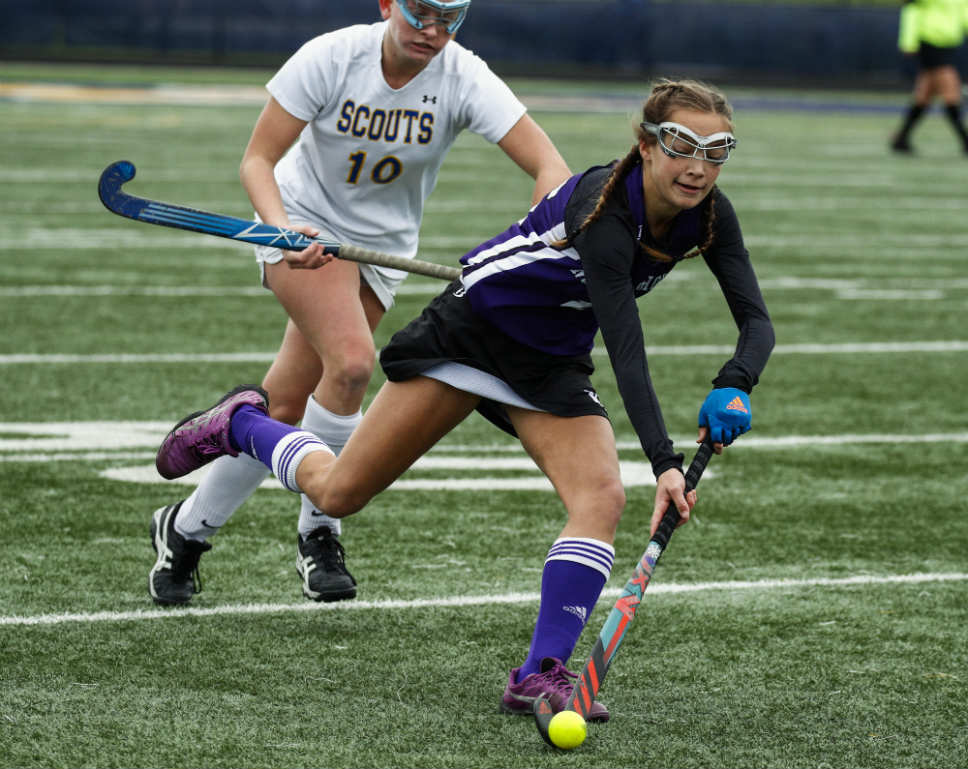 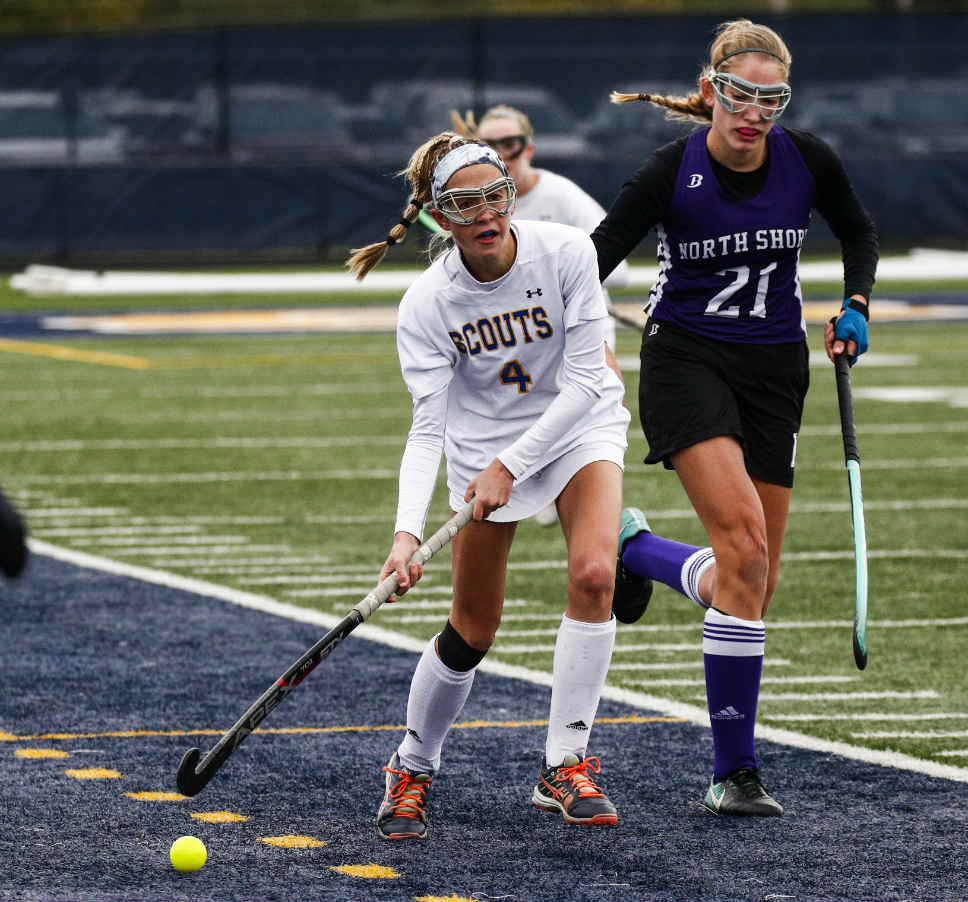 Gracie McGowan of the Scouts controls the ball in front of NSCD’s Paige Forester. PHOTOGRAPHY BY JOEL LERNER 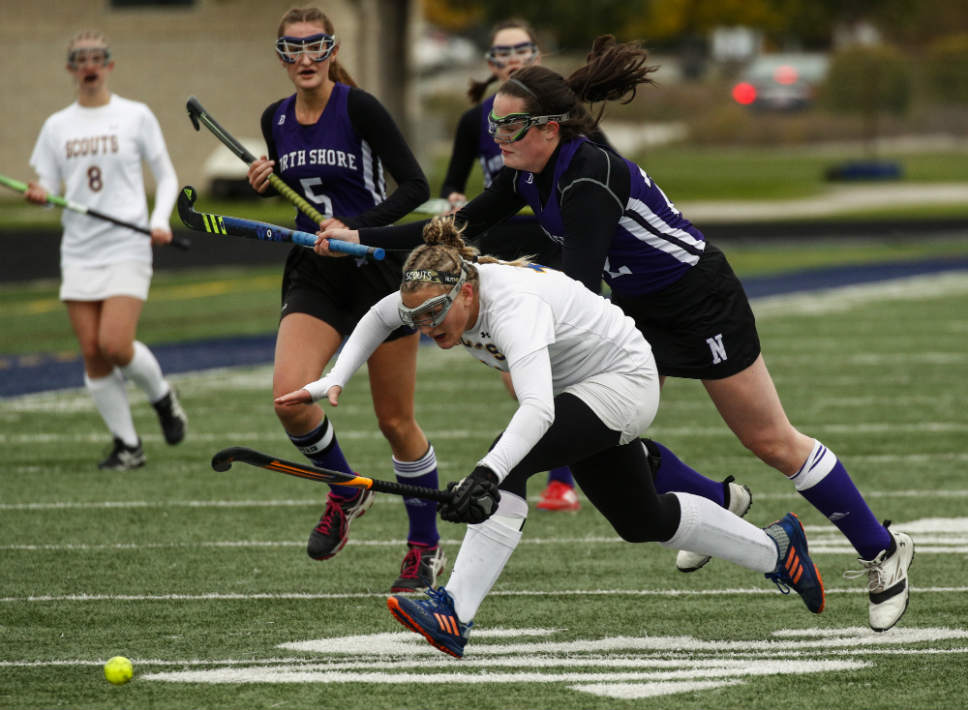 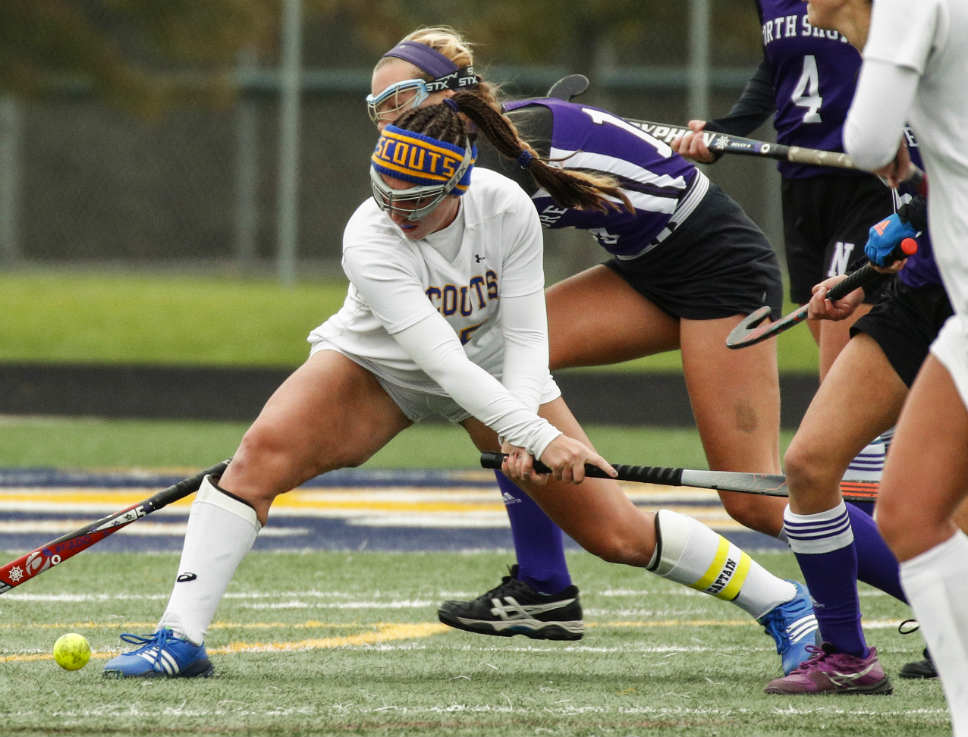 LF’s Cat Nicholson sets up to sore on a backhand. PHOTOGRAPHY BY JOEL LERNER 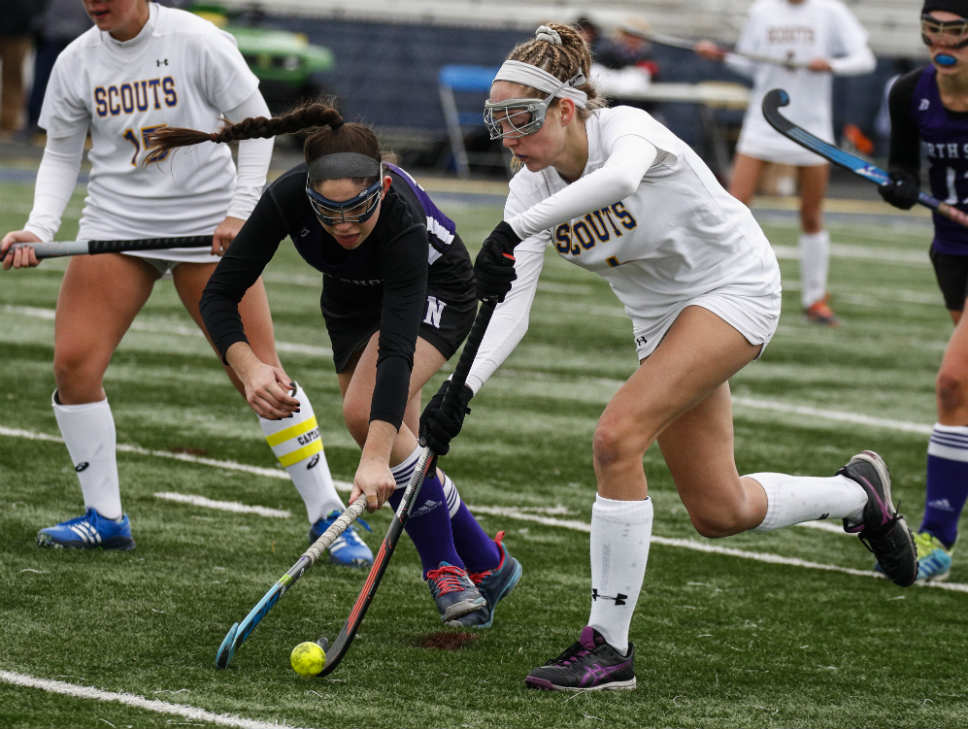 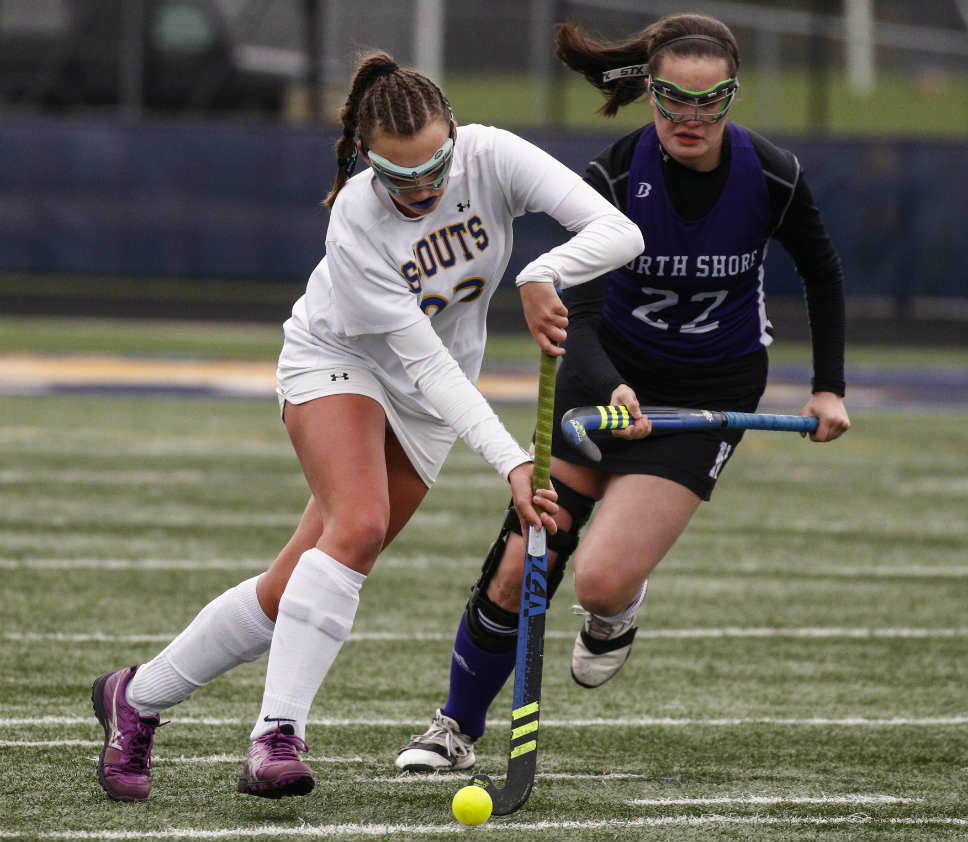 Addie Sidles of the Scouts controls the ball against NSCD’s Grace Gayser. PHOTOGRAPHY BY JOEL LERNER 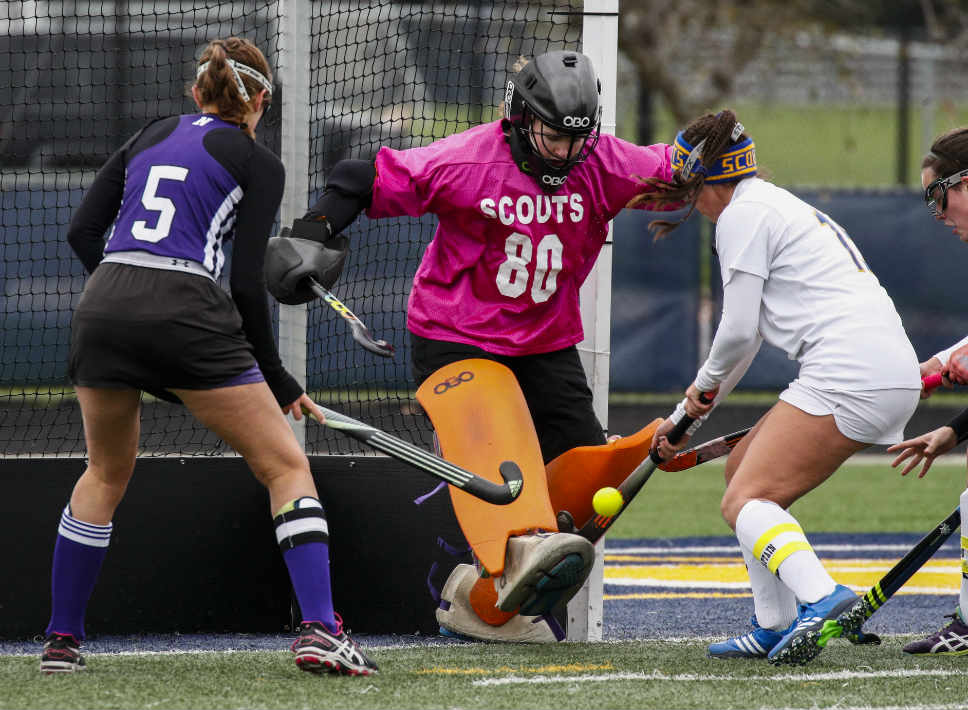