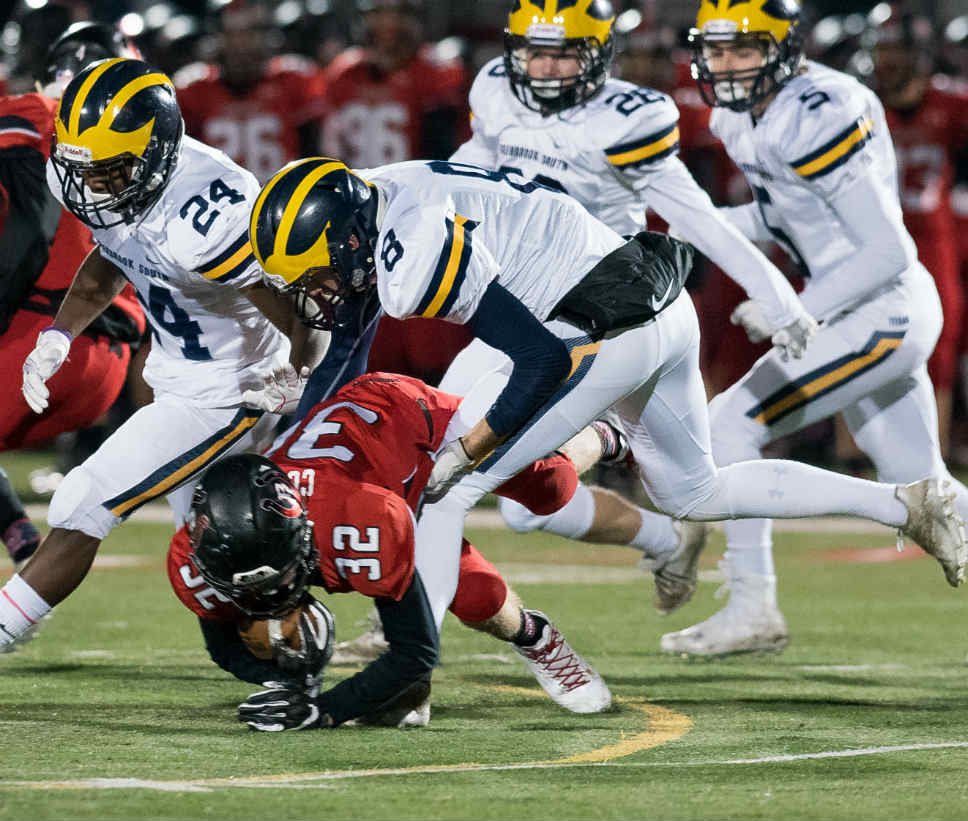 Glenbrook South’s Andy Sirakides (No. 8) takes down Barrington running back Michael Curran in first-round action of the Class 8A state playoffs. PHOTOGRAPHY BY LYNN TRAUTMANN

Maybe Andy Sirakides just wanted to warm up a little on the coldest night of the fall.

The Glenbrook South senior safety brought up the topic of beach volleyball following his team’s 48-3 loss to host Barrington High School in a Class 8A football playoff opener on Oct. 27.

“That’s what I love to do with friends, at Flick Park,” Sirakides, sporting a wispy beard, said. “It’s fun, a chance to get away.”

Barrington’s Broncos (10-0), seeded second and the reigning Mid-Suburban League West champions, ran away from the 31st-seeded Titans (5-5) with an exceptional ground attack. Their first carry of the night resulted in a 59-yard touchdown, and the Broncos — who defeated Glenbrook South’s Titans 45-24 in Week Four — would win the rushing-yardage battle 325-168.

“That first play, it woke us up,” Titans coach David Schoenwetter said.

It certainly did. South marched 60 yards on its first possession before junior Julian Aragon came through with a 33-yard field goal. The trip lasted 14 plays and consumed nearly eight minutes of first-quarter action.

But Barrington sustained its caffeinated — and highly productive — ways from that point until its 45-3 lead triggered a running clock at 7:11 of the third quarter.

It was against none other than Barrington that Sirakides made his varsity debut as a sophomore in the 2015 season opener, a 50-23 Barrington victory.

“I thought I’d be nervous, but I was fine after making a tackle, felt comfortable out there” recalled the 6-foot-3, 185-pound Sirakides, who finished with a team-high seven tackles, including one for a four-yard loss, in the final game of his prep career last weekend. “What I learned, as a sophomore on varsity and during the seasons since then, is that you can’t get too pumped up about yourself, not with great players like [seniors] Conor Nash [a linebacker] and Anthony Savino [a defensive back] in your class and playing as hard and as well as they did.

“I tried as hard as I could do to be a leader this year, to get my teammates to do their jobs and give their best each day.”

Sirakides, also the full-time punter and a part-time wideout

this fall, ended up second among teammates in total tackles with 56 (39 solos), behind Nash’s 65. The sandy spiker’s other significant stats on turf: one sack, one interception, one fumble recovery and four pass breakups.

“A very good leader for us, one of our core guys,” Schoenwetter said. “Andy was really committed to this football team.”

Sirakides was one of quarterback Jeffery Chrones’ wideouts when the two played for the school’s freshman team in 2014.

“On the quiet side, a leader-by-example player,” Chrones said of Sirakides, who lived in Arlington Heights before moving to Glenview with his family in 2010. “Also one of my best friends. I had first met him in middle school, but our relationship really got going in our freshman year.

“Andy’s years of varsity experience helped us a lot this year.”

The Titans won their second game in Week Two this fall and owned a 5-1 mark after a 40-0 defeat of Niles West on Sept. 28. South’s final four opponents — Maine South, Evanston, New Trier and Barrington — all made the playoffs and averaged 7.5 regular-season victories.

“We took a step forward as a program this year,” Schoenwetter said. “The message to our players was, ‘Trust the process.’ ”

Trustworthy Andy Sirakides hopes to attend a Big Ten School and major in computer science. Dream jobs include owner of a video game company or a lofty position with either Google or Amazon.com.

His goal next summer, somewhere on a beach?

An opportunity to play volleyball alongside legend Karch Kiraly.

Notable: Glenbrook South averaged 5.1 yards per carry in its 48-3 loss to host Barrington in a Class 8A playoff opener on Oct. 27. Titans junior running back Jack Jerfita led the way with 54 yards on 11 carries, followed by senior Ben Hides (6 carries, 36 yards), senior Savontae Garner (8-35) and sophomore Andrew Gall (9-32). … The Titans’ top three tacklers were senior safety Andy Sirakides (7), senior linebacker Conor Nash (5) and senior defensive back Adam Budorick (also 5). … Titans senior linebacker Jalen Covington sacked Broncos senior quarterback Ray Niro four yards behind the line of scrimmage at 6:55 of the second quarter. Niro ended up with 155 yards rushing and 70 yards passing. He used his legs to score two (12- and 54-yarders) of his three TDs. The 5-foot-10, 180-pounder connected with senior wideout Alec Andrea for a 51-yard TD. … The father of Titans football coach David Schoenwetter, Bob Schoenwetter, also coached Glenbrook South football teams. He won his first playoff game, a 35-14 defeat of New Trier East in 1978. South then lost 21-14 to Forest View in the second round of the 5A playoffs. Bob Schoenwetter finished his 18-year career at GBS with a record of 112-63 (.640) and nine postseason appearances.