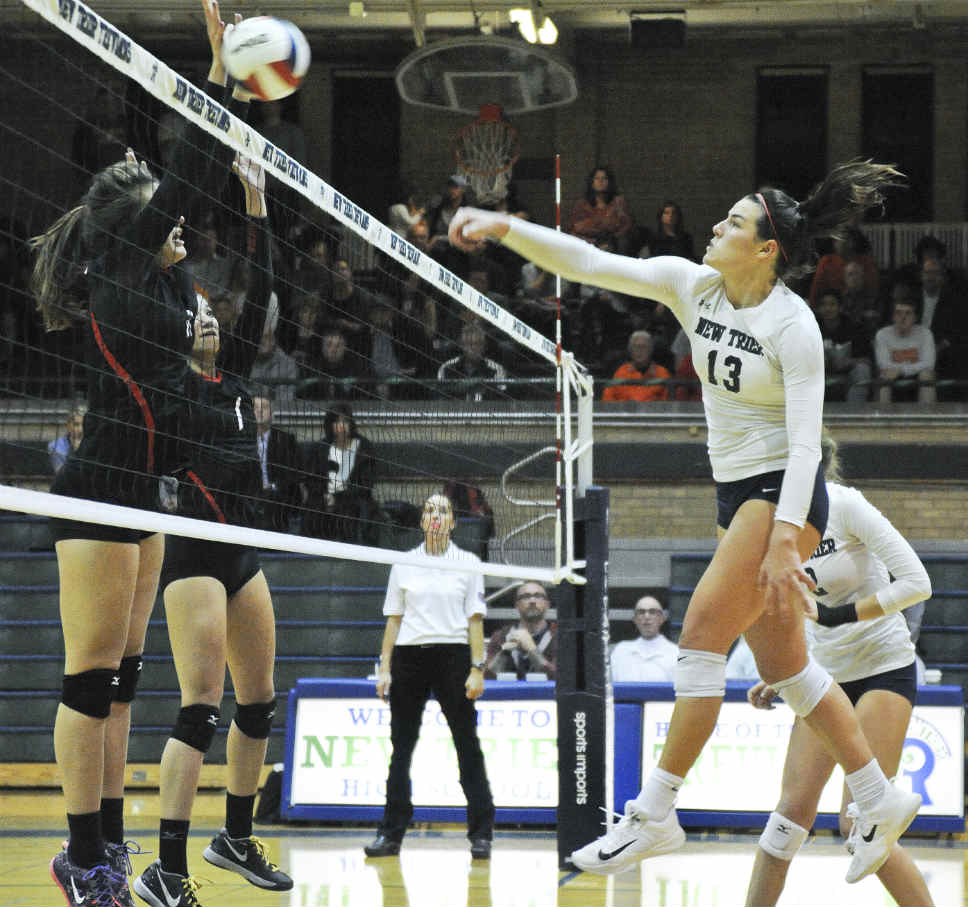 Maggie Brodman of the Trevians tries to hammer the ball through a Niles West blocker during the sectional semifinal match. PHOTOGRAPHY BY GEORGE PFOERTNER

Which is the beauty of this team.

The host Trevians hit Niles West with a multiple-attack offense in their Class 4A sectional semifinal victory on Oct. 30.

“I’ve always said that I like going to battle with a deep team,” said NT head coach Hannah Hsieh, following her team’s 25-20, 17-25, 25-19 victory over the Wolves. “It’s better than having just two or three big hitters.

“Having a deep team allows us to run multiple offenses,” she added.

“Tonight was more of a mental game than anything else,” Hsieh said. “We went into the match prepared.

“For the most part, we executed the way we practiced,” the coach added.

Niles West standout Natalia Pehar has the ability to take over a match. But, for the most part, she was held in check.

Leading the Trevians in blocks were Klise (5), Bodman (4) and Hielscher (2), while libero Julia Maisel covered the floor in skillful fashion (18 digs).

Hielscher also was stellar once again running the offense. She was credited with 29 assists.

The final point of the night was an explanation point, when Bodman buried a kill off a feed from Hielscher in authoritative fashion.

Hielscher got it done on the serving end, as well. She had three aces, including two in a row to build NT’s lead to 20-12 in the third set. McGregor also had a definitive ace late in the match.

“We don’t let up,” said Hsieh. “We don’t take anything for granted until the match is over.”

NT’s coaching staff also is making good use of its “Farm System”. Two sophomores — Magner and LuLu McShane — were brought up to the varsity for postseason play.

“They are not here just to watch,” Hsieh said. “They’re here to contribute.” 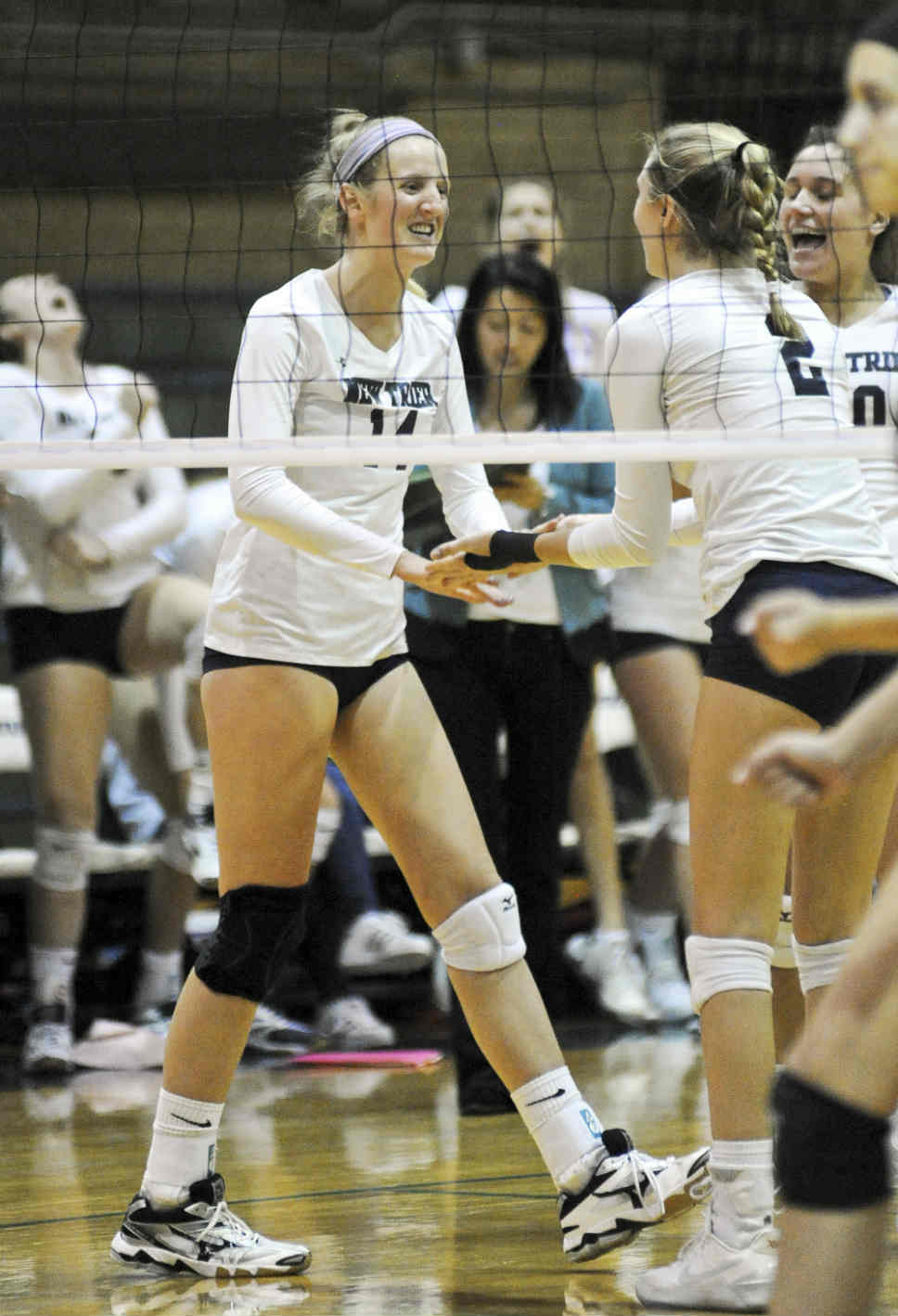 Gillian Klise (No. 14) shares a moment with Payton Hielscher and other teammates. PHOTOGRAPHY BY GEORGE PFOERTNER 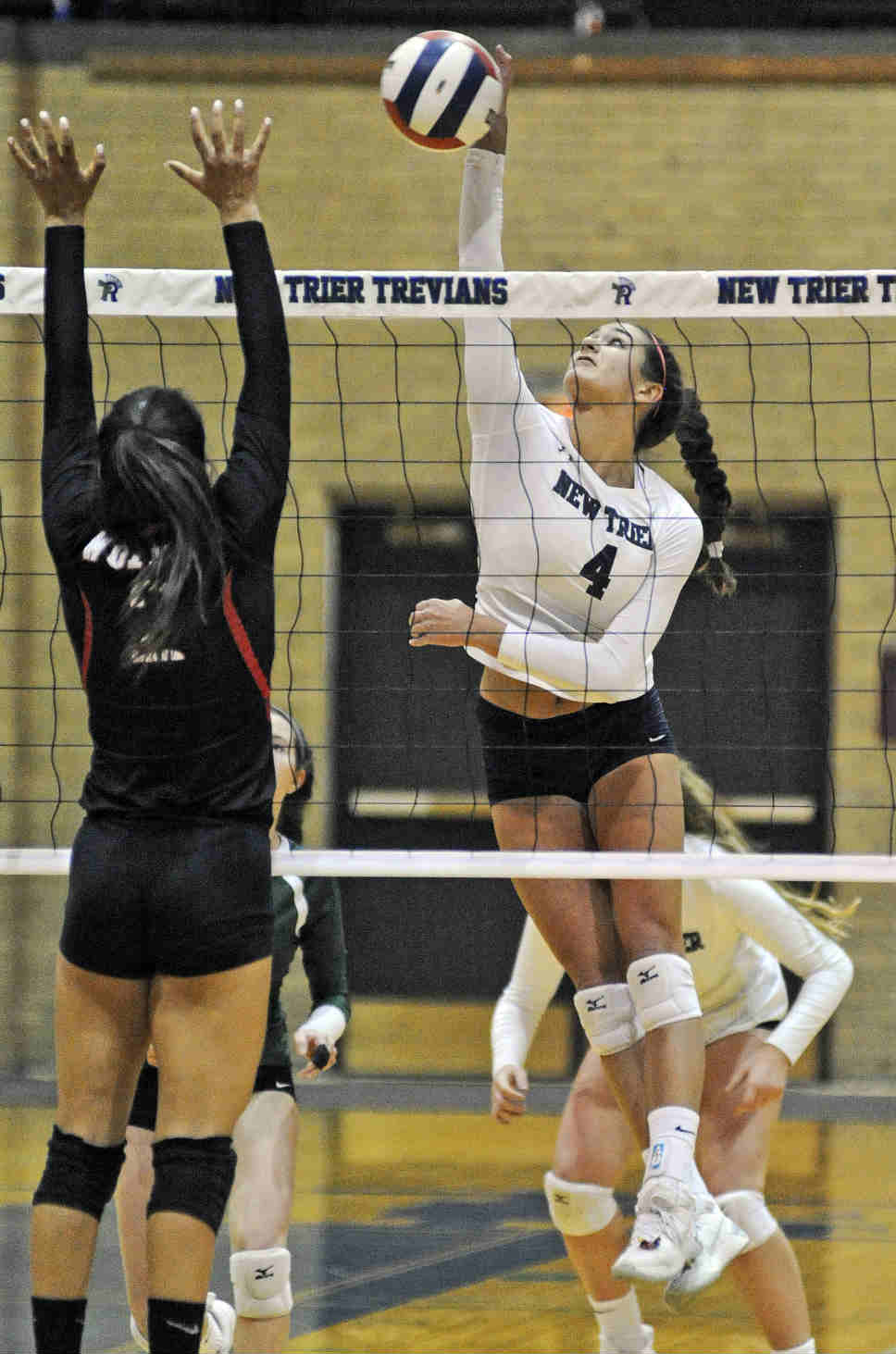 NT’s Maggie McGregor rises up to spike the ball. PHOTOGRAPHY BY GEORGE PFOERTNER 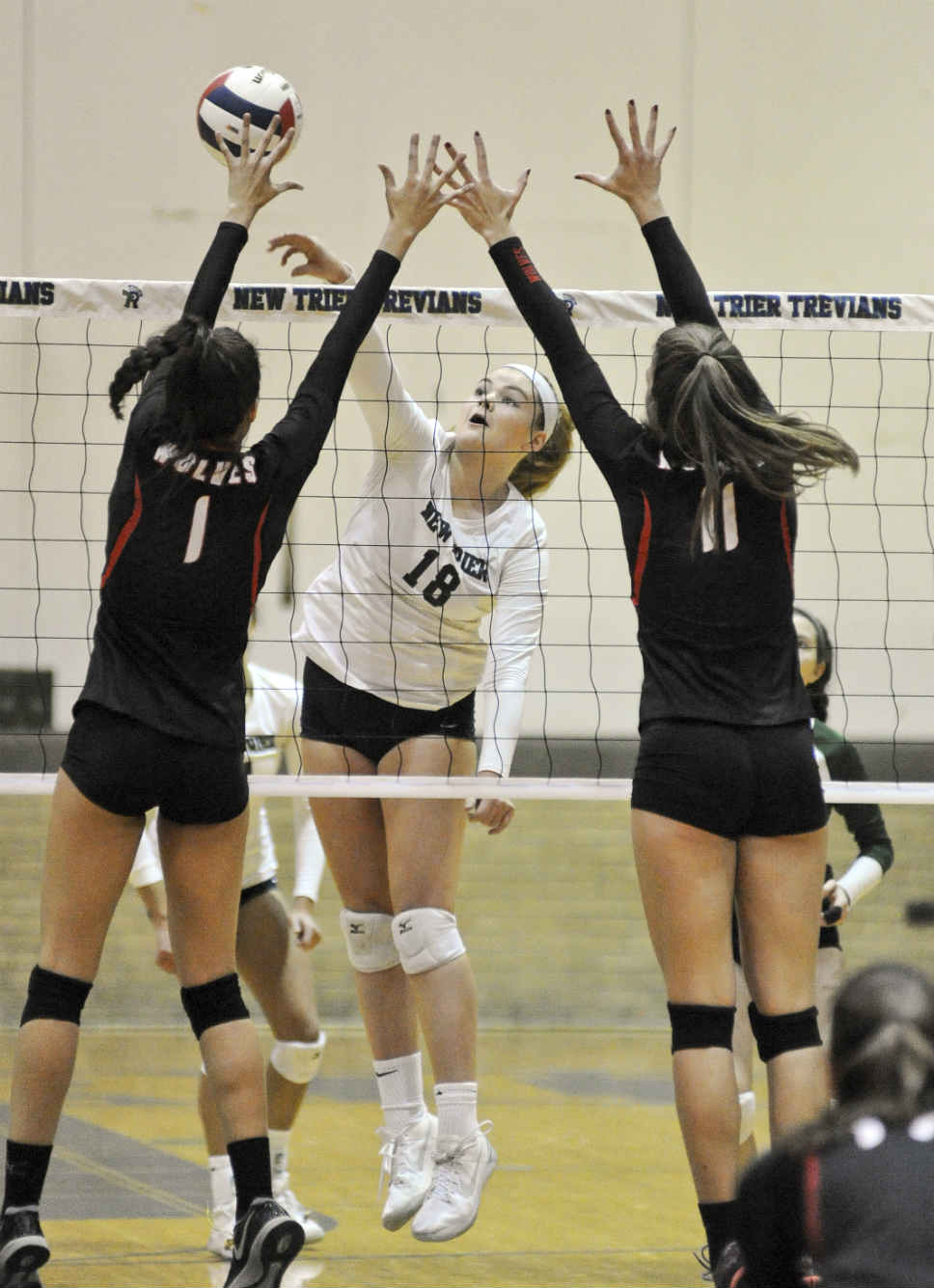 Taite Ryan of the Trevians attempts to drill the ball past two Niles West blockers. PHOTOGRAPHY BY GEORGE PFOERTNER 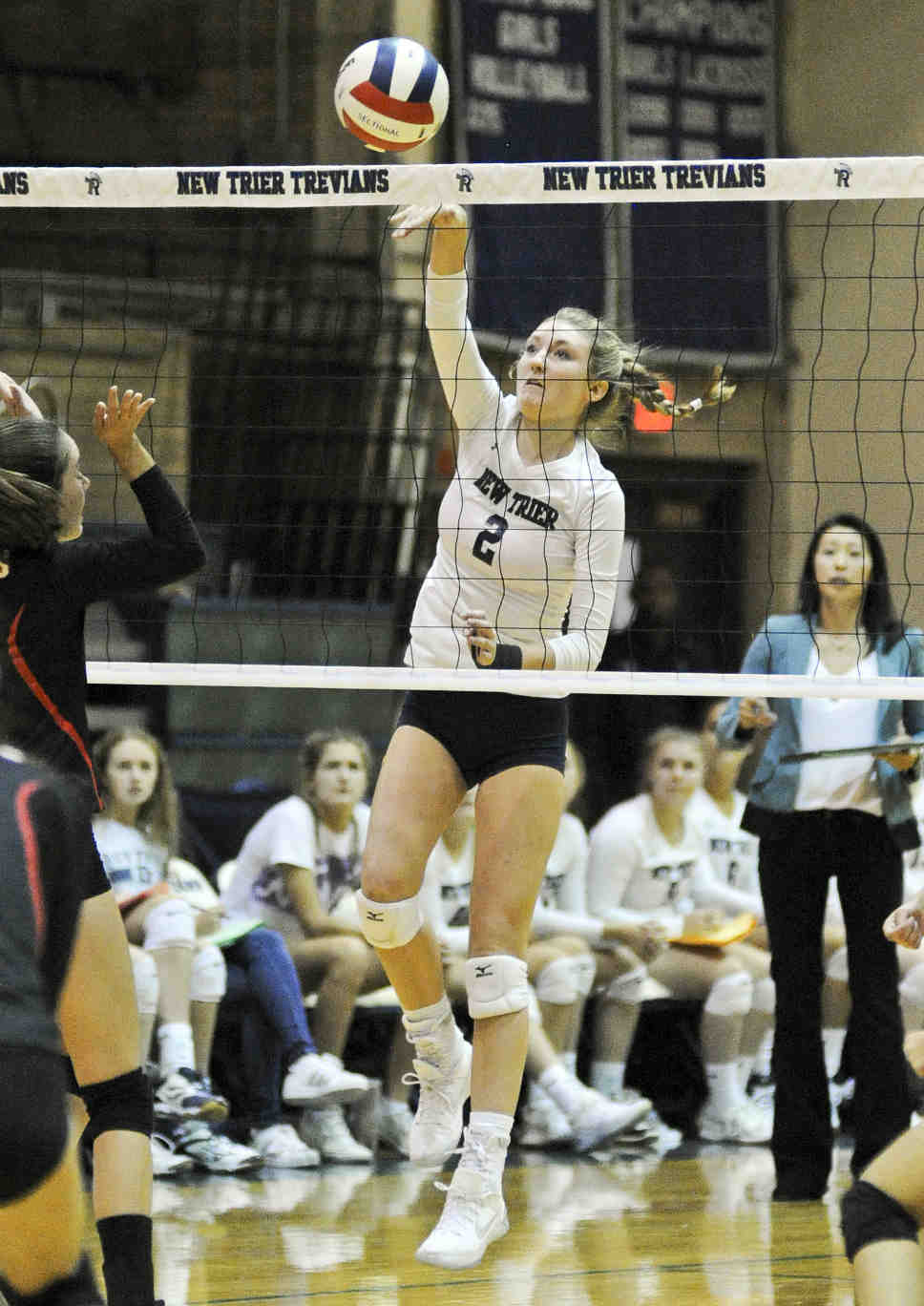 NT’s Payton Hielscher makes a play at the net. PHOTOGRAPHY BY GEORGE PFOERTNER 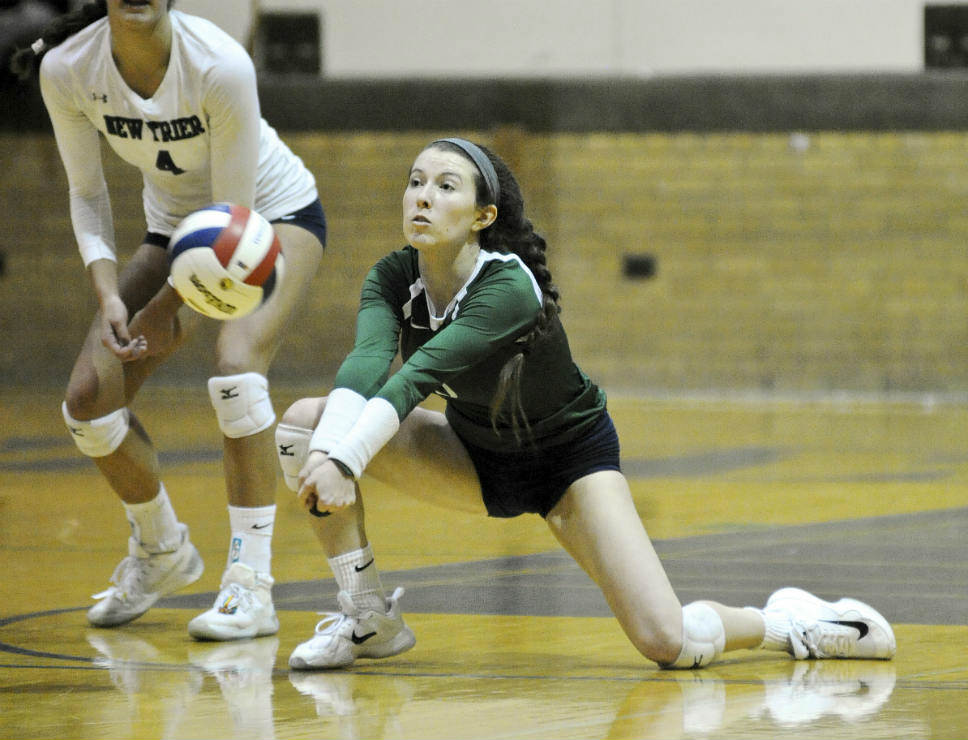 Julia Maisel of the Trevians drops to one knee to bump the ball. PHOTOGRAPHY BY GEORGE PFOERTNER