HIGHLAND PARK — Only three trick-or-treaters rang the bell on Halloween 2000, the first year the Cohn family lived at the corner of Ravinia Glen Place and Green Bay Road in Highland Park. The turnout remained paltry for several years, inspiring the family to think creatively to lure more kids to their neighborhood. That is, kids who don’t mind having to bypass zombies, ghosts, goblins, — and a witch that strongly resembles Lady Gaga — before they get to the front door.

Every year now for the past decade, Michael and Leslie Cohn and their daughters have added to the highly visible display, which spans the entirety of their corner lot and front lawn and even dangles above the street itself.

“It’s grown and this year we added some lights and turned it into a charity event where we’re asking people to bring cans to donate to Moraine Township Food Pantry,” said Michael Cohn, former president of the North Shore School District 112 Board of Education.

So far, the Cohns have received about five large bags full of canned food.

Cohn’s younger daughter, Lexi, a freshman at Highland Park High School, painted the sign for the can collection. Her older sister, Dani is a freshman in college.

Lexi reminisced about former Halloweens where she would dress up with a close friend and go trick-or-treating with her dad. They would walk down Marion Avenue, a popular trick-or-treating locale, collect bagsful of candy, come home and eat pizza.

“It was fun to be with my family and my friends at the same time,” said Lexi.

One year they decided they were going to be Oompa Loompas from Willy Wonka & The Chocolate Factory, so they wore colorful costumes, green wigs and painted themselves orange. That same year, her dad dressed as Willie Wonka and brought candy to their third grade class at Braeside Elementary School. He donned a purple jacket, which is currently being repurposed as the frock of a Harry Potter character on his front lawn.

“Most of the time my friends come here to see the decorations on Halloween and then we have other plans during Hallo-weekend,” said Lexi, who added that she and her friends will be dressing up as lifeguards this year.

This sent a spine-tingling fright down Cohn’s bones until Lexi clarified that they would all be wearing Lifeguard sweatshirts. Of course, big whistles wouldn’t hurt.

Mom Leslie Cohn started doing Halloween decorations when their daughters were little, but she prefers flowers and pumpkins to ghosts and goblins.

Michael Cohn explained that about 10 years ago, he went to a farm with his handyman to buy pumpkins when he learned that his handyman had made all of the decorations at the farm. Cohn suggested that he do the same at his house, and it became a Cohn family Halloween tradition.

After the handyman put up the first witch, Cohn said his young daughters thought she looked fat and pregnant, so the following year she had flying triplets. Not only do the witches and other ghoulish creatures surround the house, you can find a few of them dangling from the electric lines on the street.

“People have actually sent the city out a few times saying that I can’t hang things over the street and it’s a private street. Meanwhile, the little kids are smiling as they drive through with their families and they love it,” said Cohn.

Cohn added that some of the decorations are silly, including a skeleton surfing on a broom and playing the guitar; a skeleton-witch with a giant microphone, a shield and a long blond wig, making it look like Lady Gaga, and a witch with pencil sharpeners for eyes.

Cohn’s daughters also helped the handyman with the decorations throughout the years and appropriately named each one, while some were named after Harry Potter characters.

Cohn grew up near West Ridge Center in Highland Park, and he has many fond memories of shaving cream fights in the park, and trick-or-treating with no parental supervision.

The family is running out of room for all of the Halloween decorations that take up garage space, as well as additional storage in the daughters’ former playhouse in the backyard.  But Cohn still enjoys seeing children light up as they pass through the neighborhood, and hopes to collect even more cans of food for the Moraine Township Food Pantry. 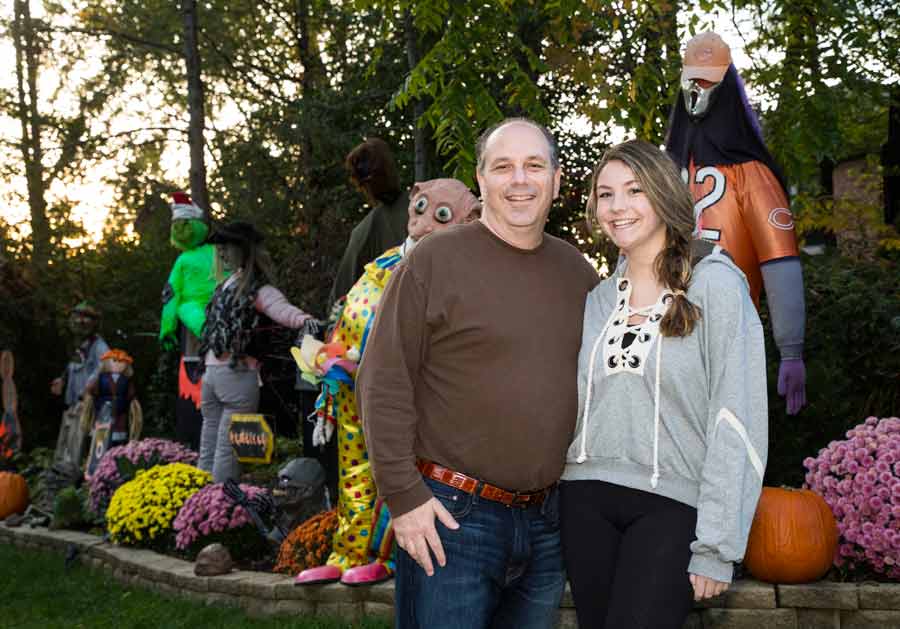 Michael Cohn and his daughter Lexi in front of their home at Ravinia Glen Place and Green Bay Road in Highland Park. PHOTOGRAPHY BY Joel Lerner/JWC Media 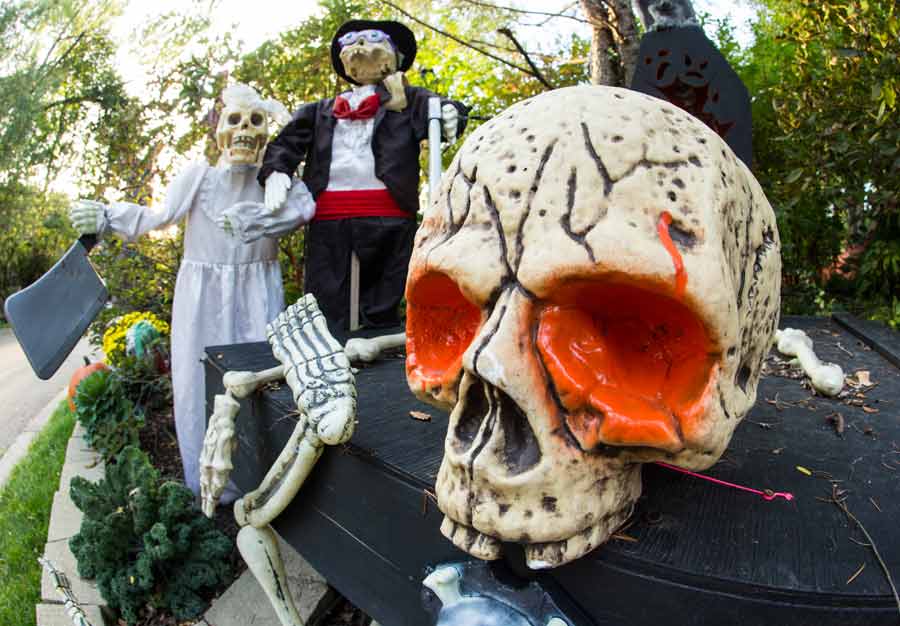 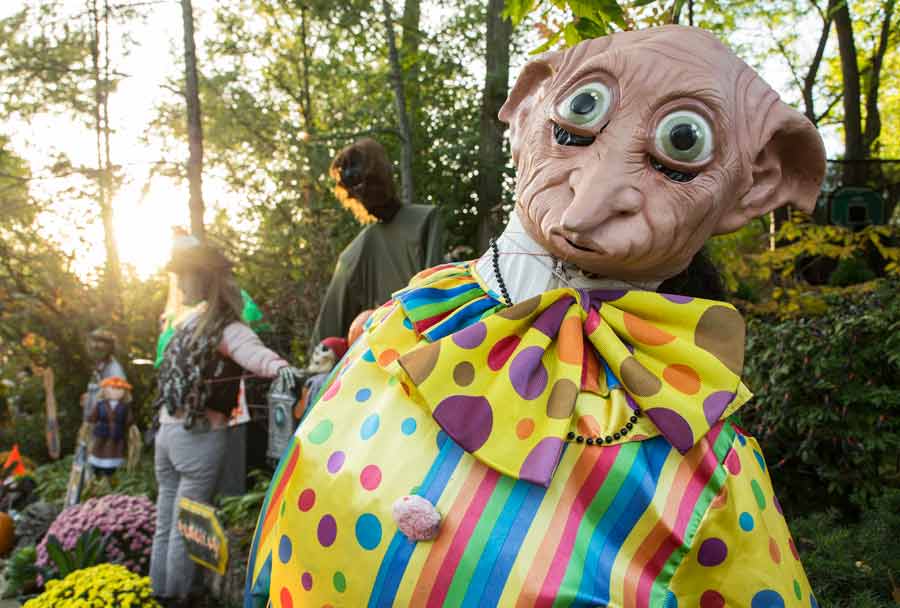 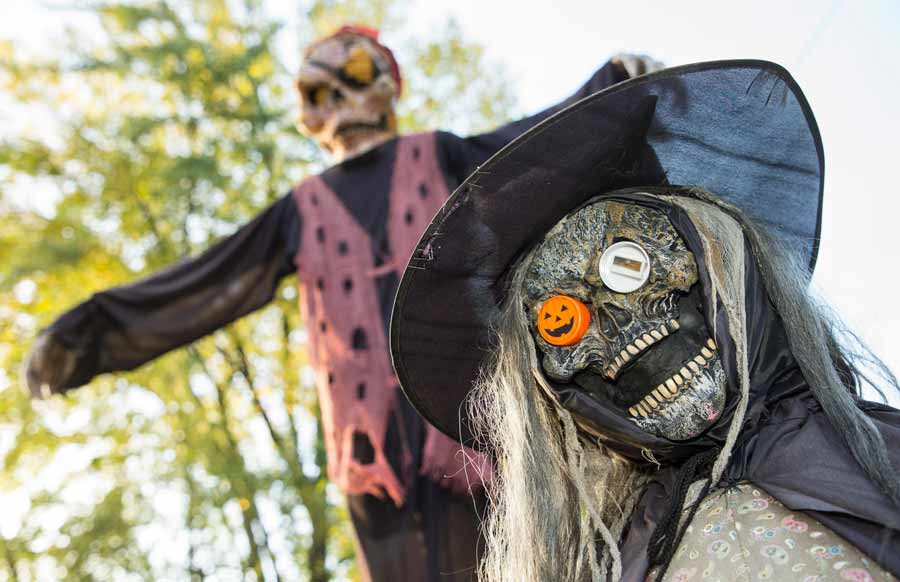 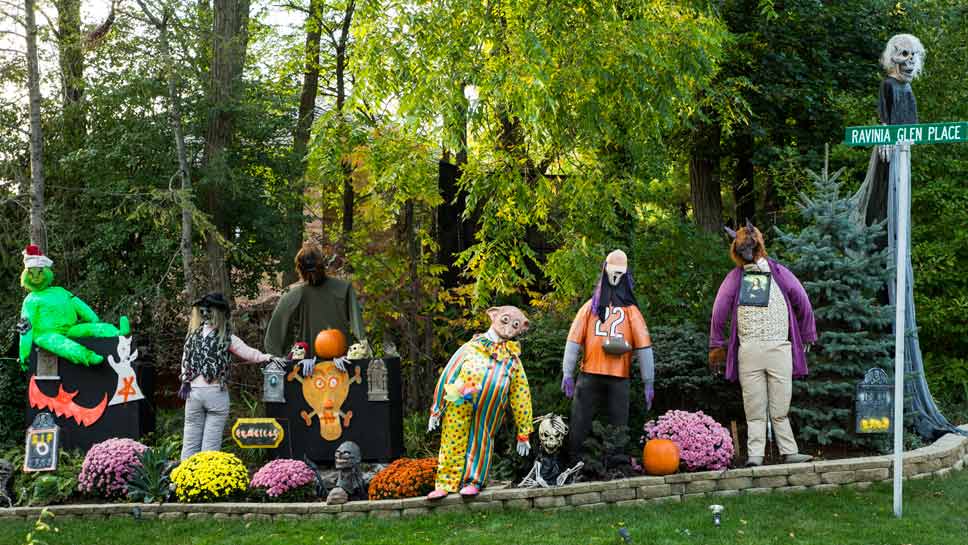 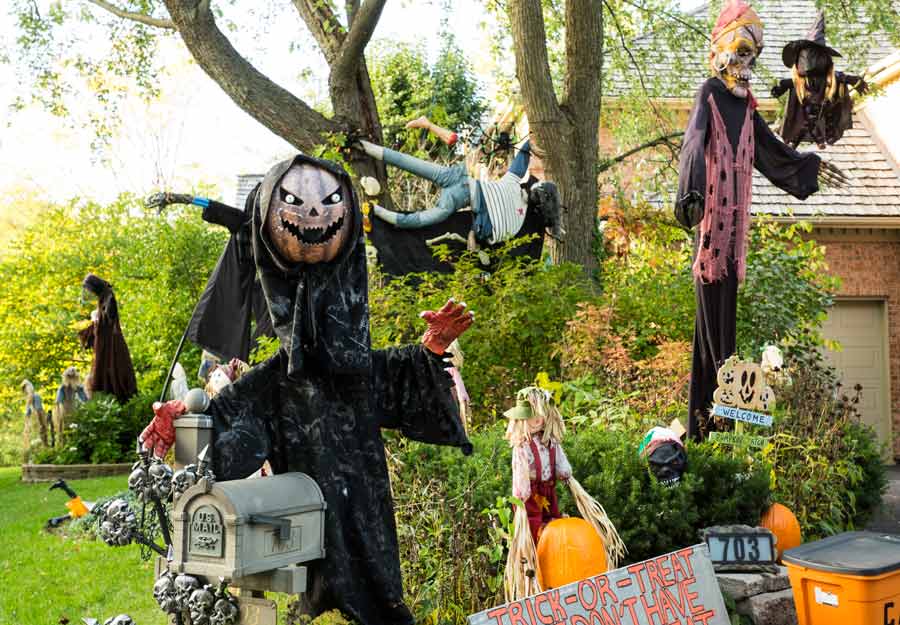 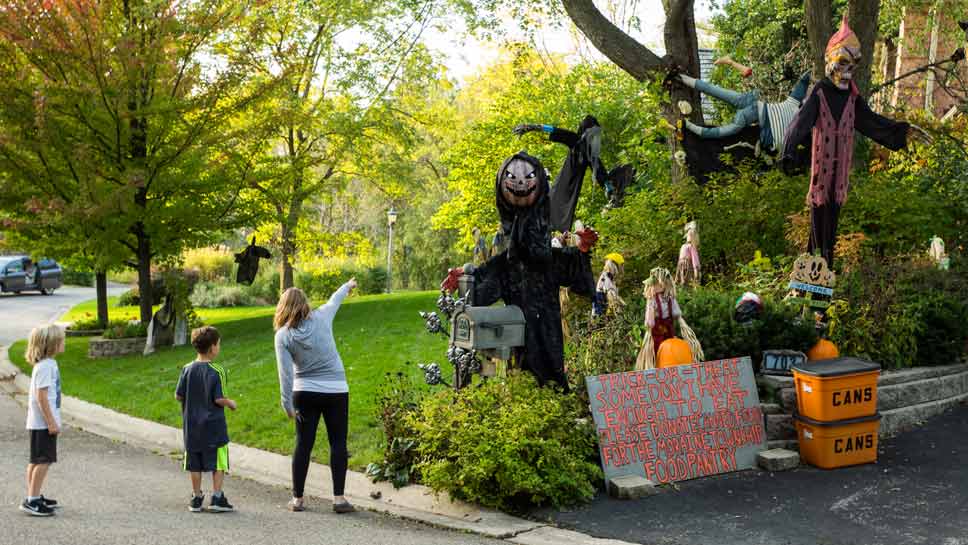