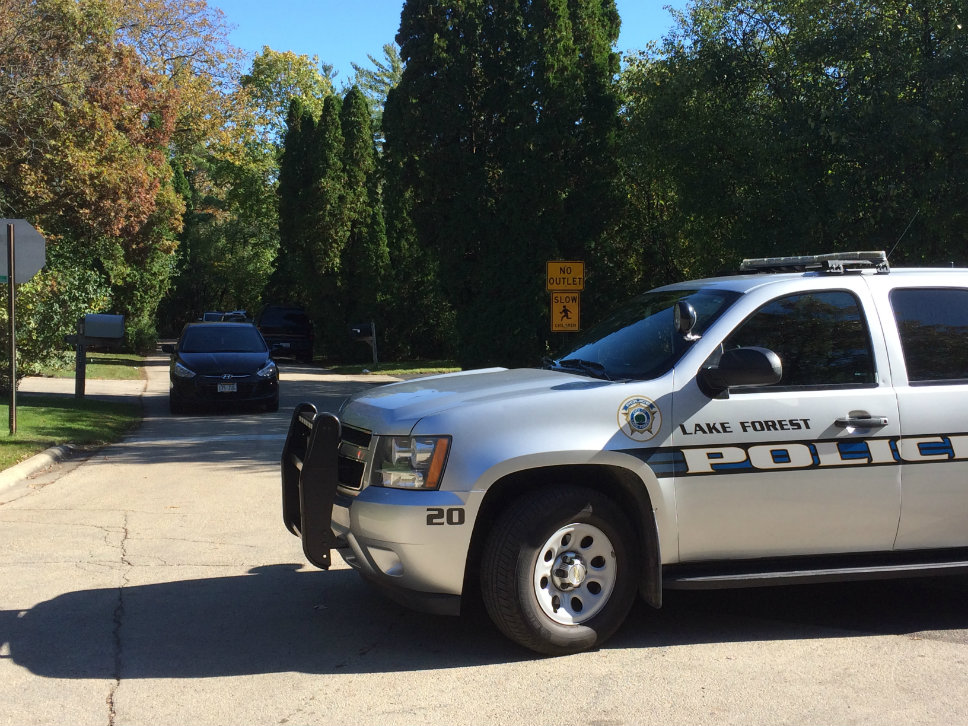 Lake Forest Police closed down Estate Lane to everyone but residents for more than 15 hours October 29 to investigate the shooting.

LAKE FOREST — Many neighbors knew a big party was going on at a home on Estate Lane East in Lake Forest Saturday night, October 28. They saw crowds of people dressed in costumes, dozens of cars — up to 50 — parked along the streets, and they noticed several Lake Forest Police Department vehicles circling the area beginning around 10:30 p.m.

Just after midnight October 29, some neighbors thought they heard fireworks, while others assumed the rapid-succession popping noises were automatic weapons fire. In the end, a guest of the party was fatally wounded from a gunshot outside the house after an argument broke out at a Halloween party, according to police. Police identified the victim as Shaft D. Wilson Jr., 19, of the 1600 block of Argonne Drive, North Chicago.

The party was hosted by an adult who lives in the residence, Sgt. Christopher Covelli of the Lake County Major Crime Task Force told DailyNorthShore on Sunday. Citing the investigation, he could not specify the name or age of the host other than to say the host was an adult over the age of 18.

The Lake County Coroner’s Office will conduct an autopsy on Monday morning, October 30.

As of Sunday evening, no one was in custody and the Lake County Major Crimes Task Force was investigating the incident. Also on Sunday, as news and rumors circulated around Lake Forest, residents tried to make sense of the fatal shooting.

Officials estimate that about 100 people attended the party on the 1300 block of Estate Lane East. Neighbors said that during the party, there were at least 50 cars parked on Estate Lane East and Oak Knoll Drive.

On Sunday, police blocked off the area to all but those who live there.

“It sounded like firecrackers, but then we saw lots of police cars,” said one neighbor.

Another said he and members of his family heard shots in rapid succession just past midnight, but they assumed it was fireworks because they knew a party was going on, and they went to bed.

“That was the state of our minds,” the neighbor said. “We thought it was a bunch of kids having a party. Also we were thinking it was kids from outside of town. It didn’t have the feel of a Lake Forest thing.”

One Estate Lane neighbor said he saw more than 50 cars on both Estate and Oak Knoll, which runs perpendicular to Estate.

“You never see that around here,” the person said. “Sometimes people have a large party and have a valet but I’ve never seen so many cars.”

Several people who live in the area said they first noticed police in the vicinity around 10:30 p.m. The person who said he noticed 50 cars or more said he thought there was little police to do.

“I don’t know what the Lake Forest Police could have done with all the people,” he said.

Yet another person who lives in the area also said he saw several police cars circling the area around 10:30 p.m. A family member phoned the police non-emergency number and was told there was no danger, he said.

A man who lives close to the house where the shooting occurred said he saw a lot of activity around 11 p.m. with people milling around outside. About an hour later he heard gunshots and a lot of commotion.

One man who lives in a home near Estate Lane said he and his wife were standing on their back porch when they heard what sounded like firecrackers at first, but then he sensed it was more. He got in his car and started driving toward the activity but got no further than Old Mill Road and Oak Knoll.

“It was pretty weird,” said the man. “I saw a policeman with an assault rifle standing there around 12:15 (a.m.). He wouldn’t let us down there. Then I saw some girls in a car coming from there. They said ‘there’s a man lying dead back there.’”

A person who lives a block from Estate Lane within the perimeter police established for their investigation said there was a crowd of approximately 20 men and women in their late teens or early 20s milling in her front yard immediately after the shooting.

“We witnessed a big group of people going back and forth, back and forth,” said the woman. “Then they were on our front lawn. At first we thought they could have been playing games — we didn’t know. But the way they were talking, I thought that they were going to start fighting with each other.”

Another woman who lives in the area said she heard nothing at the time of the shooting but learned from a neighbor their daughter could not drive home because of the police activity.

“It’s a very sad day for our community,” said another neighbor while walking her dog early Sunday afternoon.