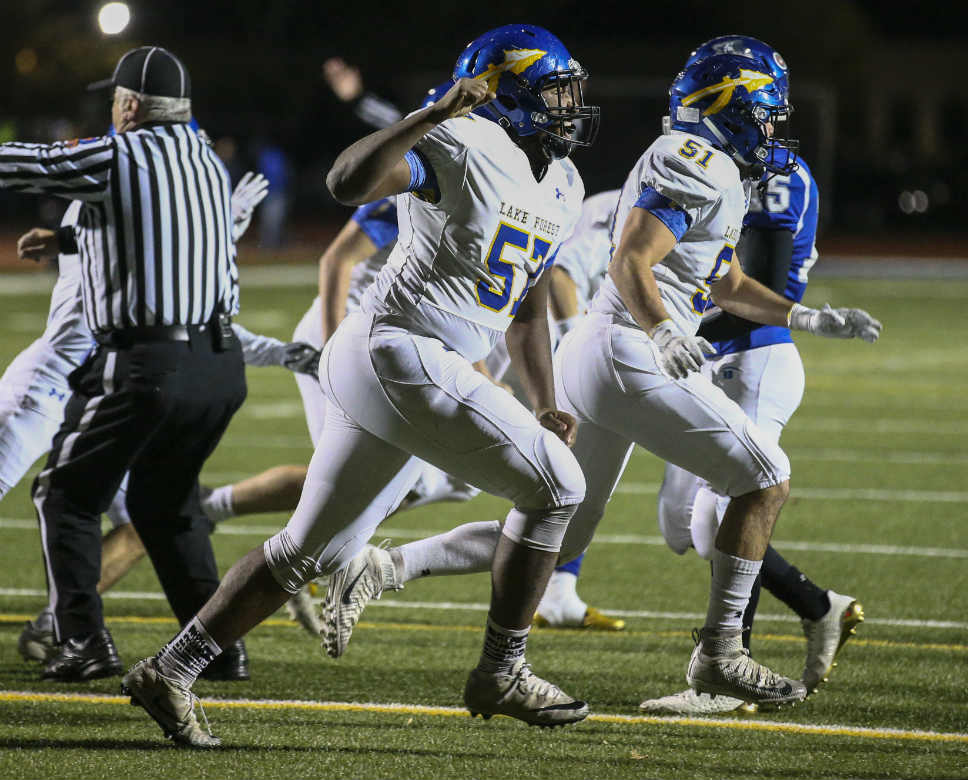 Lake Forest’s Shannon Charleston (No. 57) after blocking a punt in the state playoff win over Riverside-Brookfield. PHOTOGRAPHY BY JOEL LERNER

Shannon Charleston had to be tempted to do a little dance after sacking Riverside-Brookfield quarterback Hunter Hughes for a nine-yard loss on the final play of the third quarter.

Maybe, he could’ve done the Charleston.

“I don’t have a dance,” said the 6-foot-1, 259-pound Charleston, flashing a smile as broad as his shoulders pads. “If I did, I’d get yelled at by [Coach Chuck] Spagnoli.”

However, two plays later, the underrated Charleston might have done a little shoulder shimmy, when he came off the field after blocking a punt.

Thanks to those two plays — along with a ton more by his teammates — Lake Forest scored a decisive 35-10 victory over host Riverside-Brookfield in the opening round of the Class 6A state playoffs on Oct. 27.

The Scouts (6-4) have found their rhythm. They have won four straight games, and they are officially one step closer to the Big Dance in DeKalb.

“I thought we executed all phases of the game tonight,” said Spagnoli. “It’s hard to lose, when you do that.”

And the head coach is proud and maybe even a little tickled to see Charleston playing so well.

“He didn’t play a lot as a junior. But we’ve always known that he’s had the ability,” Spagnoli said. “Unless you get out there and play, you don’t know your potential.

“We don’t get a lot of linemen with his kind of size,” the coach added. “So it’s nice to get one.”

The affable and effervescent Charleston plays the game with power and speed. He now has three sacks and eight other tackles for loss on the season.

And that big grin and wide smile? It’s always there, according to teammate Ryan Cekay.

“He’s one of the nicest guys that I know,” said the star receiver. “He’s a happy guy. He’s fun to be around. Always has a smile on his face.”

Cekay, meanwhile, turned in another stellar performance. The speedy wideout was targeted 11 times and caught nine passes for 131 yards.

His best grab of the night — a 38-yarder that went for six — came early in the fourth quarter on a well-designed fade route down the middle of the field to put the Scouts up by 25 points with 10:07 left on the game clock.

“I love it when we call passing plays,” said Cekay. “I’ll take as many as I can get.”

His numbers on the season are starting to pop out. The 6-4 junior has made 39 receptions for 657 yards.

His connection with senior quarterback Jack Mislinski (12-19-0, 152 yards) certainly was evident against the Bulldogs. This pass-catch duo picked up yards in chunks. Five of their pass plays went for 14 yards or more.

“Our offense has been revamped since the Lake Zurich game [a 27-0 setback in Week Six],” Cekay said. “Our offensive line [featuring center Andrew Grabemann, guards Justin Noster and Kaden Locy, and tackles Chase Bahr and Augy Cirame] is playing well. We’ve got our running going. We’re complementing one another.”

Senior running back Bryan Ooms came up with a night of oohs and ahs. He took 14 handoffs and gained 128 yards with TD runs of five, 25 and 51 yards.

“Bryan certainly made the most of his opportunities,” said Spagnoli. “He showed off his speed on a couple of those runs.

“And,” the coach added, “give our line credit. On a couple of his runs, Ooms wasn’t even touched. That tells you that there was some good blocking.”

On the defensive end, the Scouts allowed just 16 rushing yards. And they did that without having star inside linebacker John Deering (injury) on the field.

The 6-foot-5, 250-pound Mills made his presence known on a number of occasions. He recorded two sacks for a combined 19 yards. And he also had a two-yard tackle for loss.

Others coming up with tackles for loss included Yale (2), Cavalaris, Spencer Yauch, Adam Khater and Will Wisniewski.

Yauch also forced a fumble — recovered by Scheidler — early in the second quarter, which led to a nine-yard TD run by Jacob Thomas (19-48).

Scheidler also had two pass breakups, while fellow cornerback Alex Moss intercepted a pass — his second of the season — early in the fourth quarter. 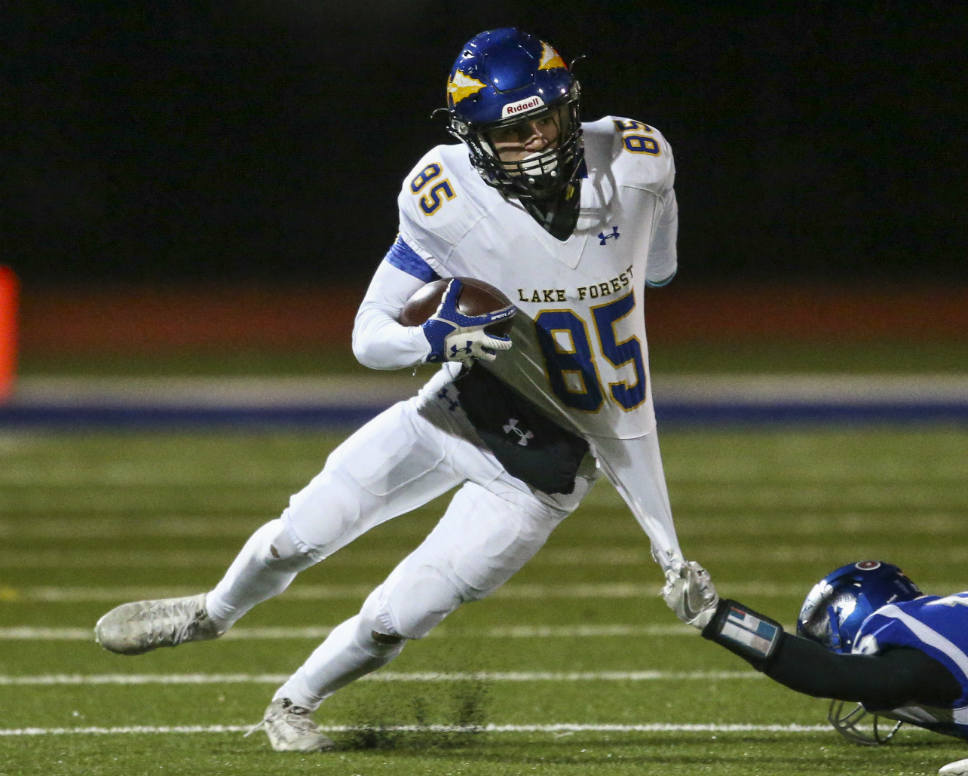 LF wide receiver Ryan Cekay tries to tear away from a defender. He had nine catches for 131 yards and one TD. PHOTOGRAPHY BY JOEL LERNER 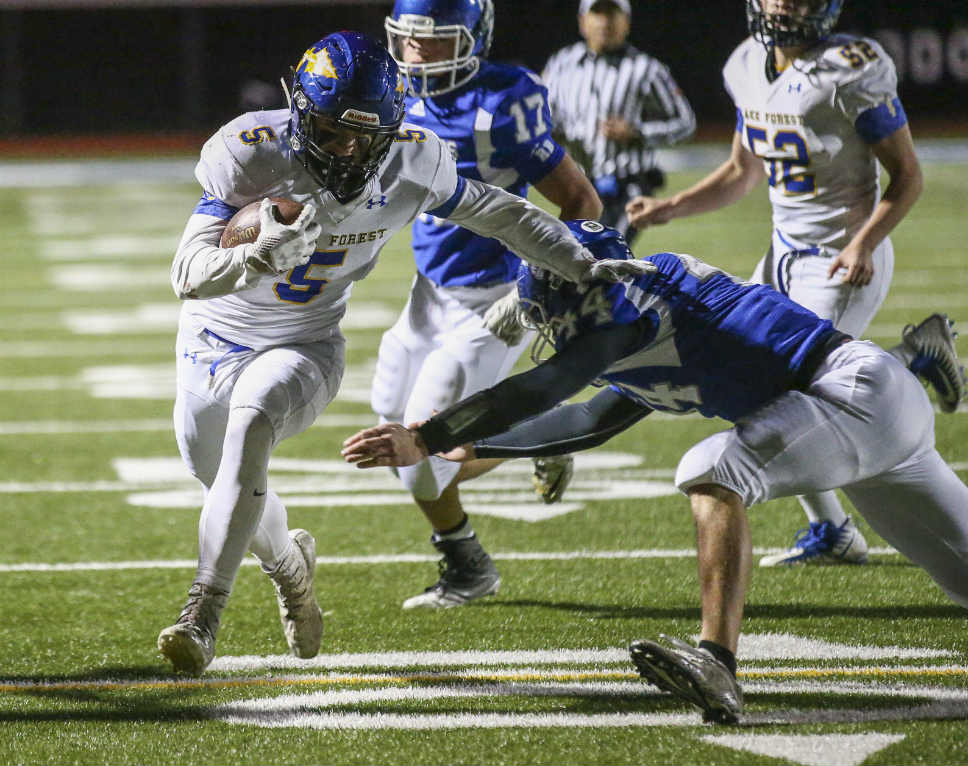 Running back Bryan Ooms pushes away a Riverside-Brookfield defender on his way to the end zone. He finished the game with three TD runs. PHOTOGRAPHY BY JOEL LERNER 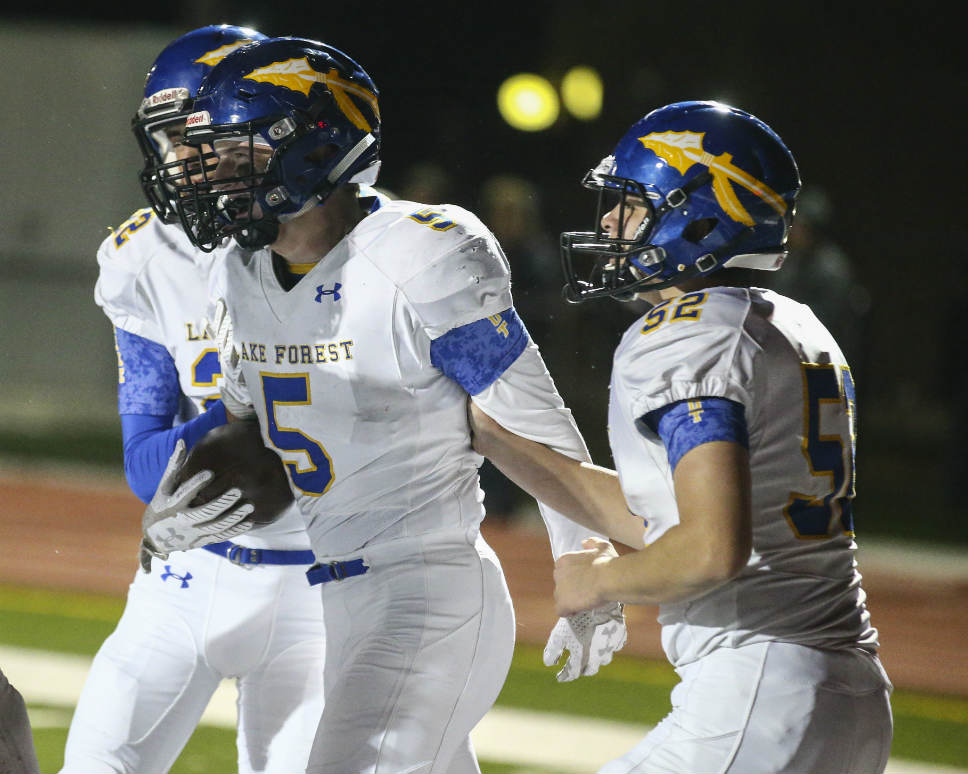 Flanked by Luke Nolan (No. 22) and Augy Cirame (No. 52), Bryan Ooms flashes a smile after scoring one of his three TDs. PHOTOGRAPHY BY JOEL LERNER 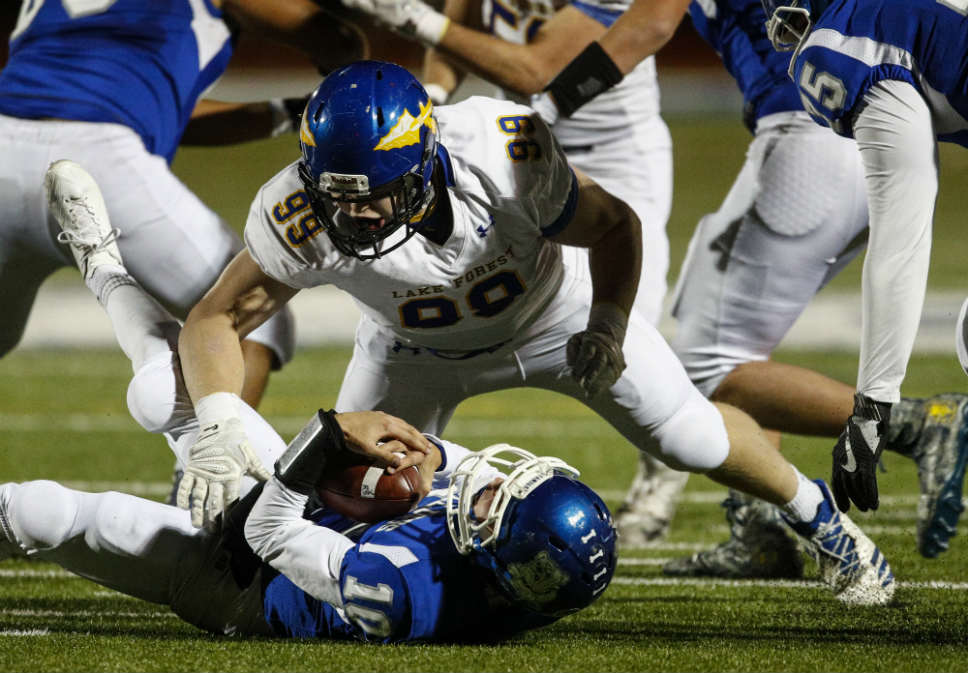 Rylie Mills of the Scouts sacks R-B quarterback Hunter Hughes. He had two sacks and one other tackle for loss in the contest. PHOTOGRAPHY BY JOEL LERNER 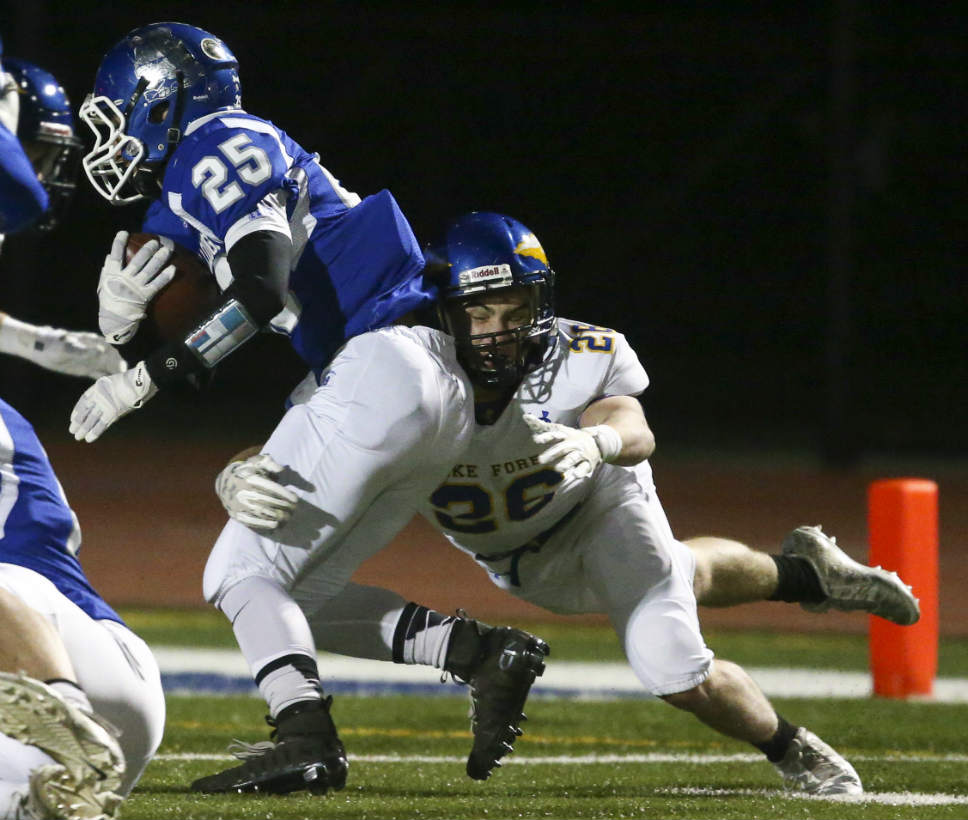 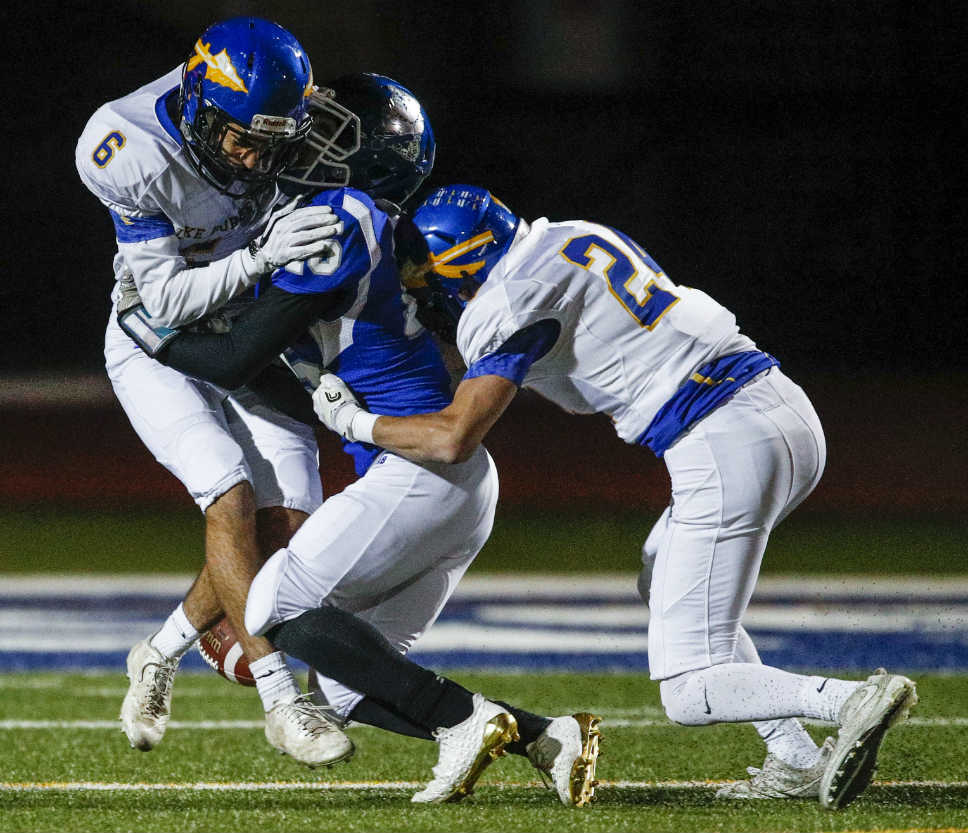 Will Freeman (No. 6) and Eddie Scheidler team up to bring down Riverside-Brookfield’s Nicolas Del Nodal. PHOTOGRAPHY BY JOEL LERNER 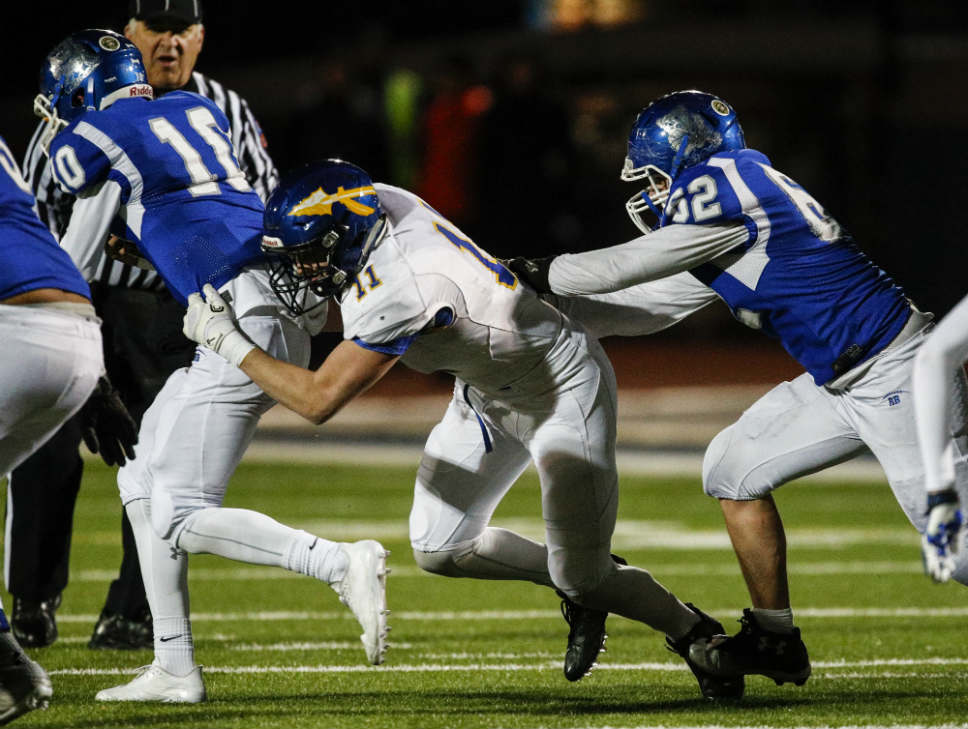 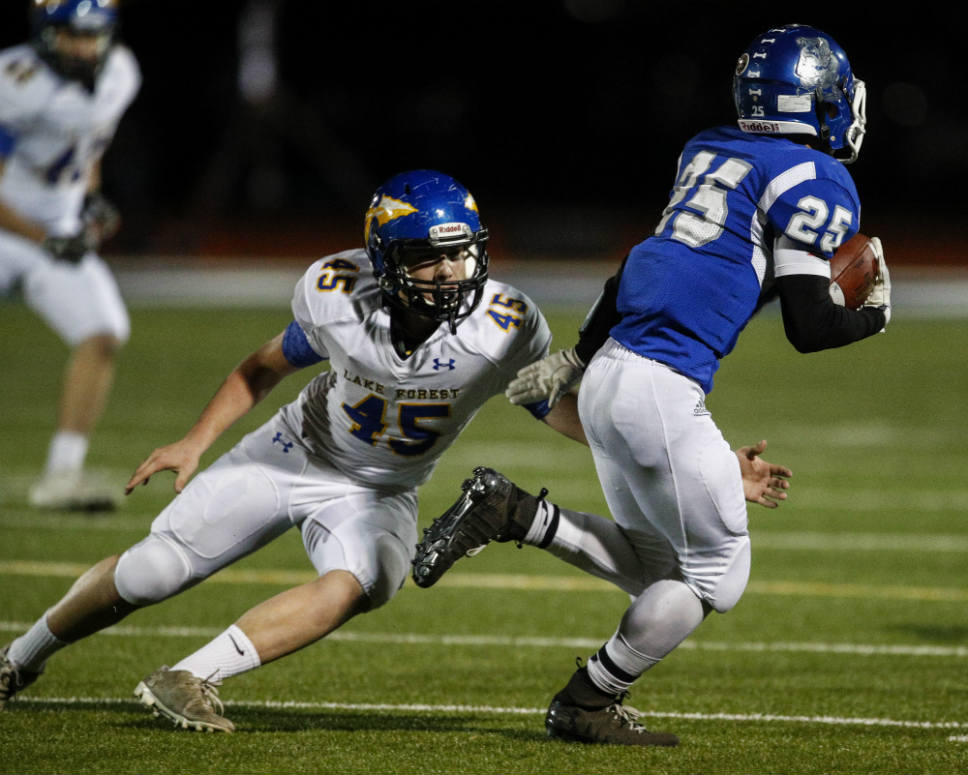 Will Wisniewski of the Scouts sets up to tackle Nicolas Del Nodal. PHOTOGRAPHY BY JOEL LERNER 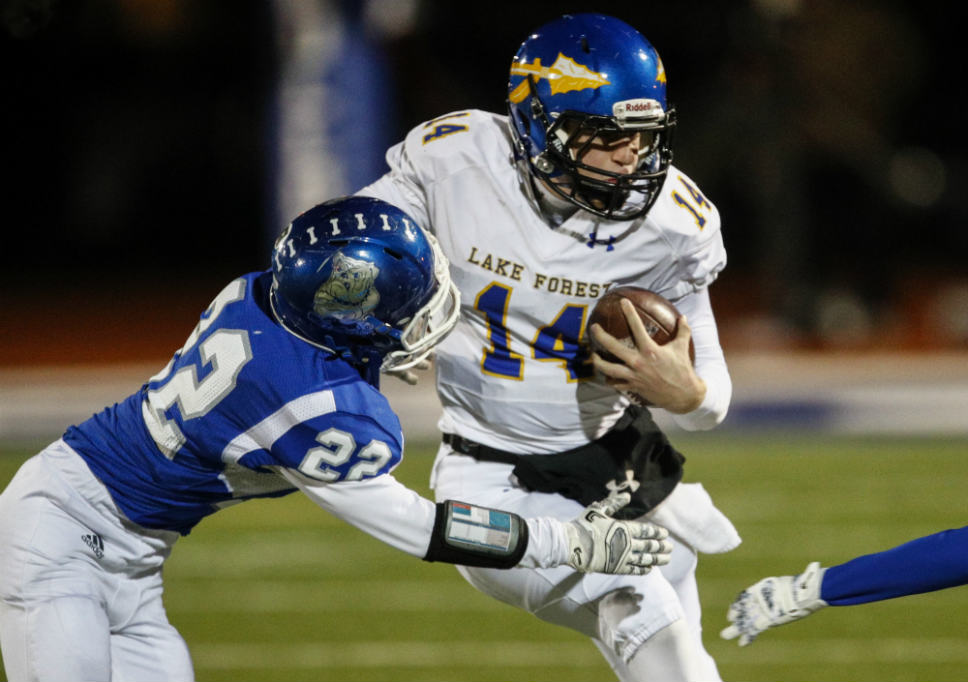 LF’s Jack Mislinski tries to shake off a defender on a QB keeper. PHOTOGRAPHY BY JOEL LERNER 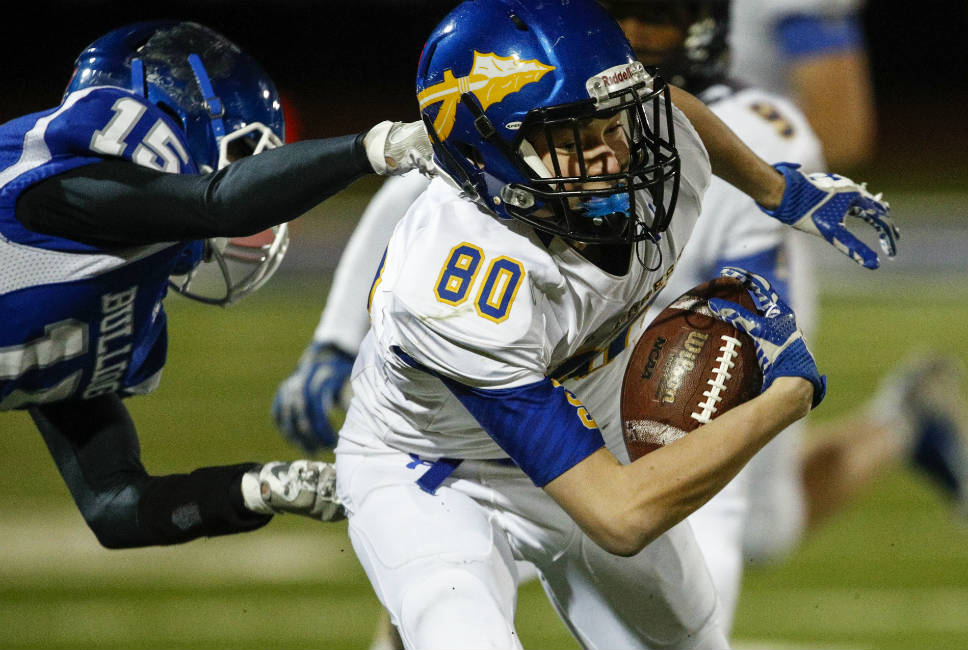 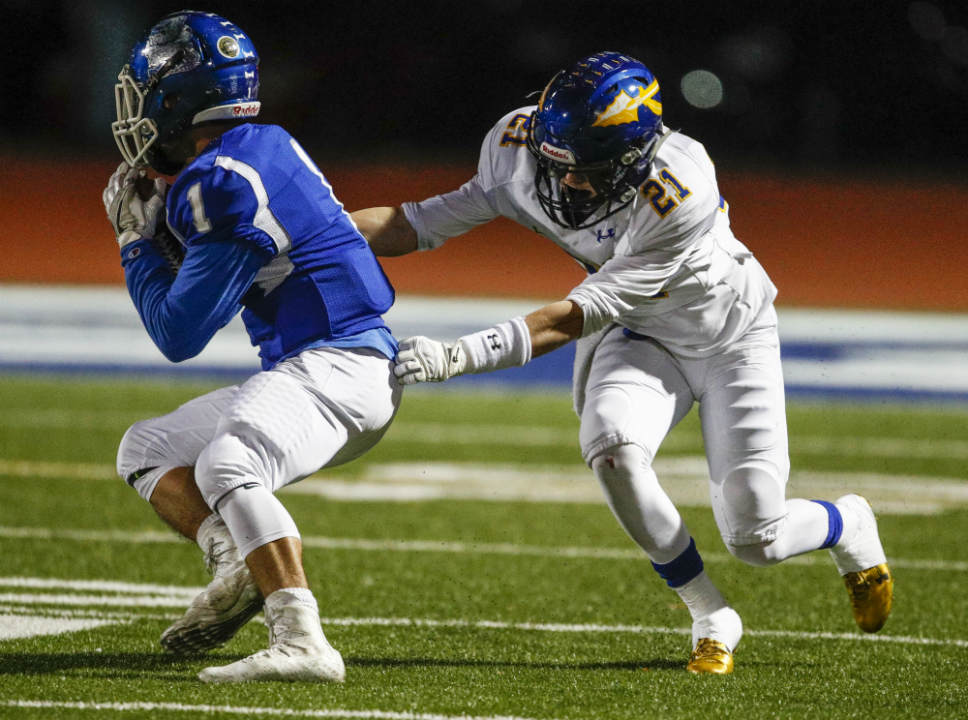 Chris Cavalaris of the Scouts tries to bring down Stefan Giminski of the Bulldogs. PHOTOGRAPHY BY JOEL LERNER 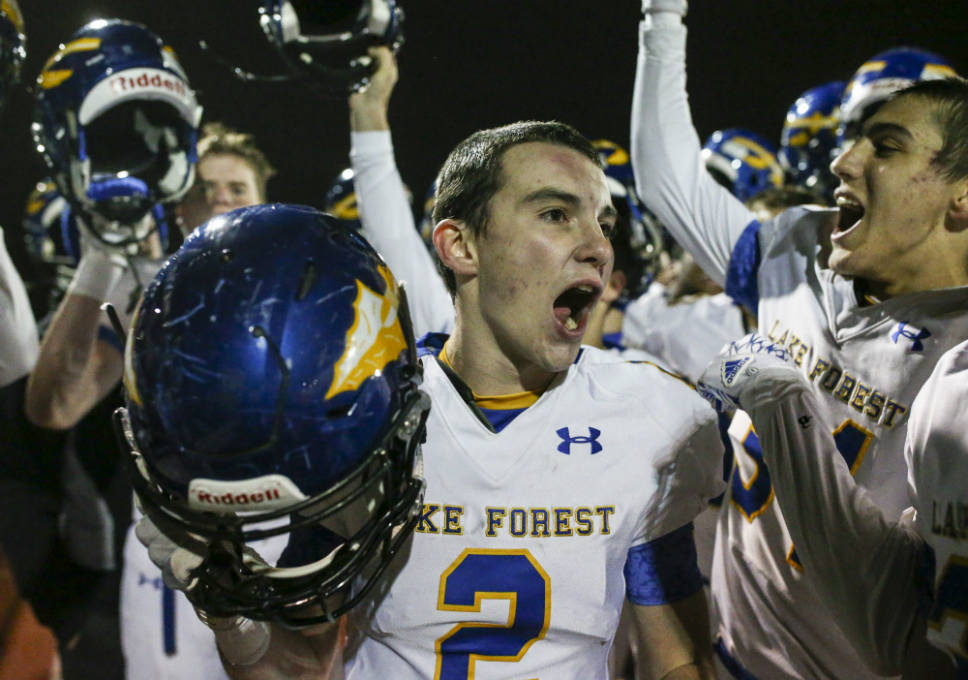 Alex Moss screams out after the Scouts beat Riverside-Brookfield. He had an interception in the game. PHOTOGRAPHY BY JOEL LERNER 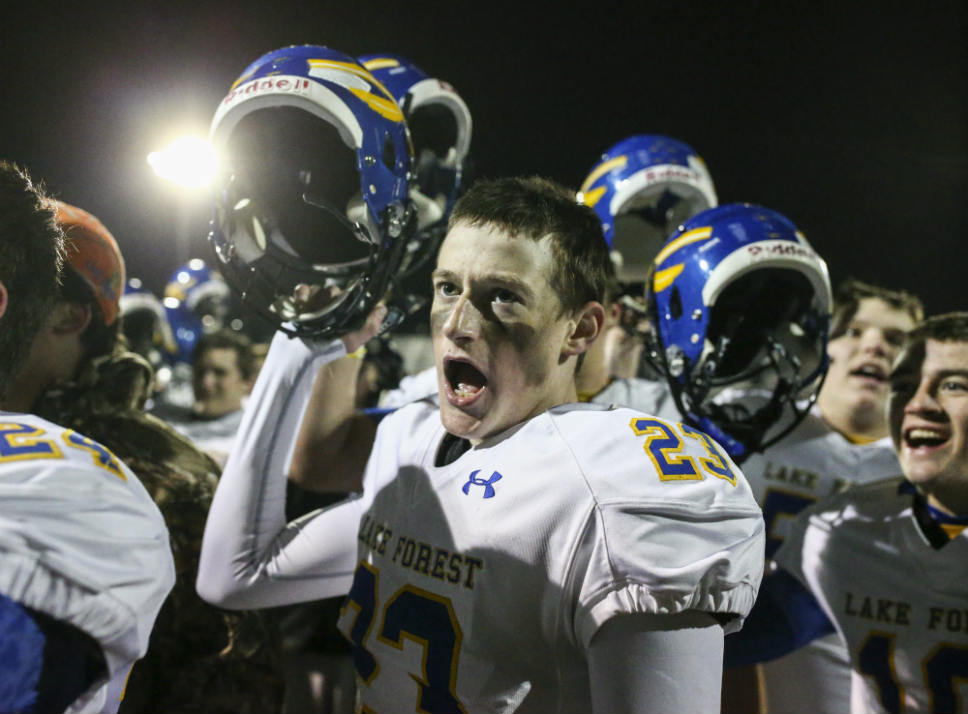 Connor Reilly celebrates with his teammates. PHOTOGRAPHY BY JOEL LERNER