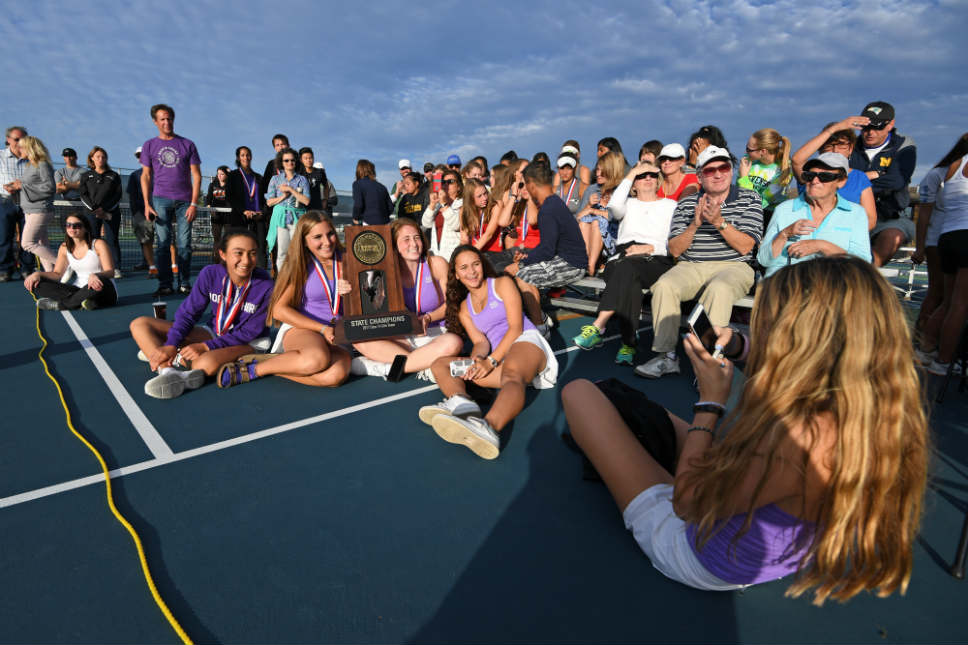 One of its doubles players was a figure skater for years.

The head coach of the squad served and volleyed for New Trier East tennis teams in the early 1970s and gave himself two years to achieve a world singles ranking of 100 or better on the pro tour.

All they did was make school history last weekend.

NSCD captured the Class 1A girls tennis state championship — the program’s first — with three entrants: freshman Claudia Miller, who spent a year with her family in Spain before enrolling in the Winnetka school this fall; senior singles player Cara Savin; and the doubles team of juniors Alex Arenson and Caroline Lommer.

Lommer had been adept at executing camel spins atop rinks before hitting topspin shots atop courts.

“Amazing. I’d never expected to get to state,” admitted Lommer, who teamed with Arenson to win three of five doubles matches in the three-day tournament (Oct. 19-21).

A girls team — in any sport at NSCD — had never won a state title before NSCD tallied 19 points to edge runner-up Chatham Glenwood by two points at Buffalo Grove High School on Oct. 21.

NSCD’s Raiders hadn’t even won a sectional, settling for a runner-up showing at Vernon Hills on Oct. 14.

But NSCD’s Raiders sat atop the state standings after Day One, on Oct. 19, and officially clinched the title when Chicago Latin’s Maya Seymore/Annabel Edwards defeated Chatham Glenwood’s Anna Lytchakov and Medha Venigalla for the state doubles championship on Oct. 21.

Miller, a 5-8 seed, came through with the Raiders’ biggest win, downing 3-4 seed and good friend Kelsey Neville of Antioch 6-4, 7-5 in a state quarterfinal on Oct. 20.

Quarterfinal victories at state are worth four points; all other wins in the front draw are worth two.

“Most singles players are either consistent players or strong hitters,” Arenson said. “Claudia is both.”

Miller bowed to top-seeded and eventual state champion Nicole Roc of Northside Prep in a 6-1, 6-1 semifinal and finished fourth when she lost 4-6, 6-0, 6-1 to Lakes freshman Megan Heuser in the match for third place on Oct. 21.

“This is amazing, a big deal,” Miller — whose mental strength matches her talent and sound overall game — said after she had received her state medals (individual and team) and posed for pictures with her teammates and the historic team trophy.

“I had heard good things about our players before my first day [at NSCD]. They were super nice, very welcoming.”

Savin, a second-year captain, was front and center with her open arms. The hard server dubbed herself the “mother” of the team, adding she was equally strict and fun-loving this season. She netted a pair of crucial victories in the back draw last weekend, nipping senior Elizabeth Eckerty of Casey-Westfield Co-op 4-6, 6-1, 10-7 (super tiebreaker) before picking up another point with a 6-4, 6-0 defeat of Wheaton Academy’s Carly Cham.

On match point against Eckerty, Savin (3-2 at state) ripped deep groundstrokes to the corners during an exchange that lasted at least 30 seconds.

The fun talk among the NSCD players and coaches and NSCD athletic director Patrick McHugh last weekend was the issue of the school’s tennis courts. NSCD has only three.

One of the players reportedly suggested the construction of more courts on campus if the Raiders were to win the conference meet.

Did the Raiders get that in writing?

Nobody affiliated with NSCD’s girls tennis team was worried about that. Purple-and-white clad Raider Nation had a state title to celebrate.

The blueprint for 2017 that Golden had devised for his netters was a simple one.

“All we wanted to do each day was try to get a little better than yesterday,” said Golden, a North Shore Country Day varsity assistant coach for several seasons before succeeding Green after the 2016 season. “If someone had asked me at the beginning of the season, ‘How’s your team going to do this year?’, I would have said, ‘I have no idea.’ Claudia, a competitive, year-round tennis player with a solid game and a good attitude, came through for us. So did the rest of the team. 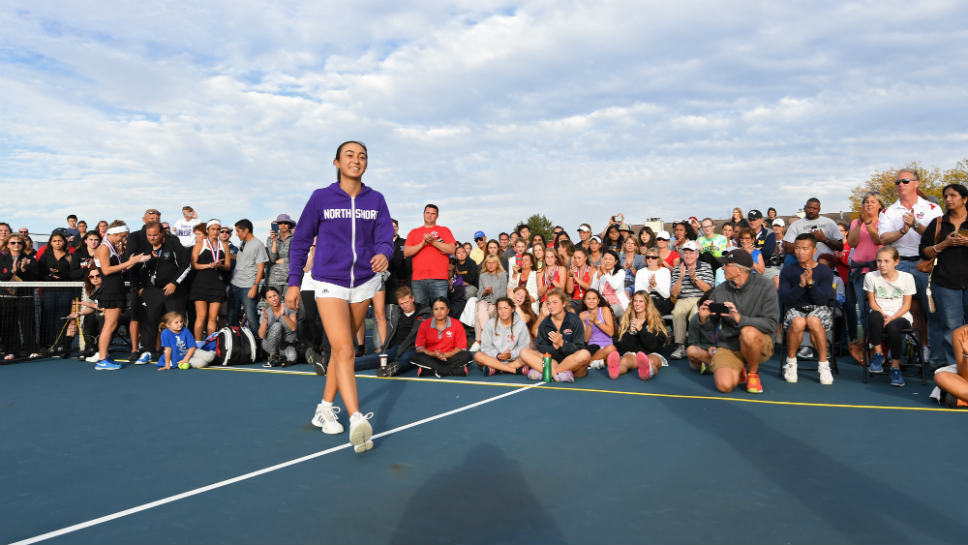 Freshman Claudia Miller of the Raiders marches to accept her medal for placing fourth in singles at the Class 1A state tournament. PHOTOGRAPHY BY PATRICK GORSKI 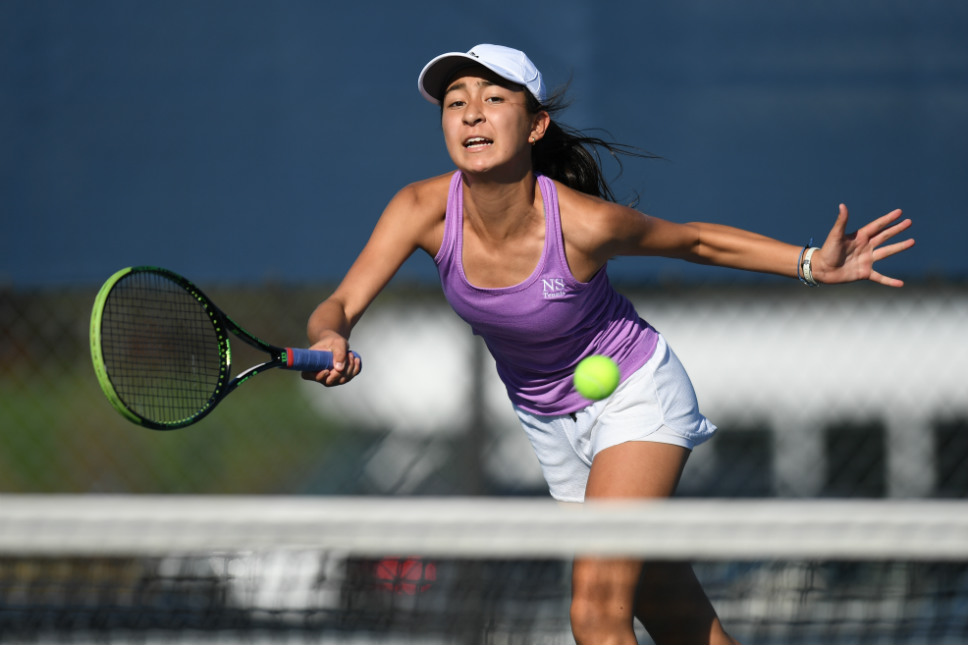 Claudia Miller chases down a shot during the third-place singles match at the Class 1A state meet. PHOTOGRAPHY BY PATRICK GORSKI 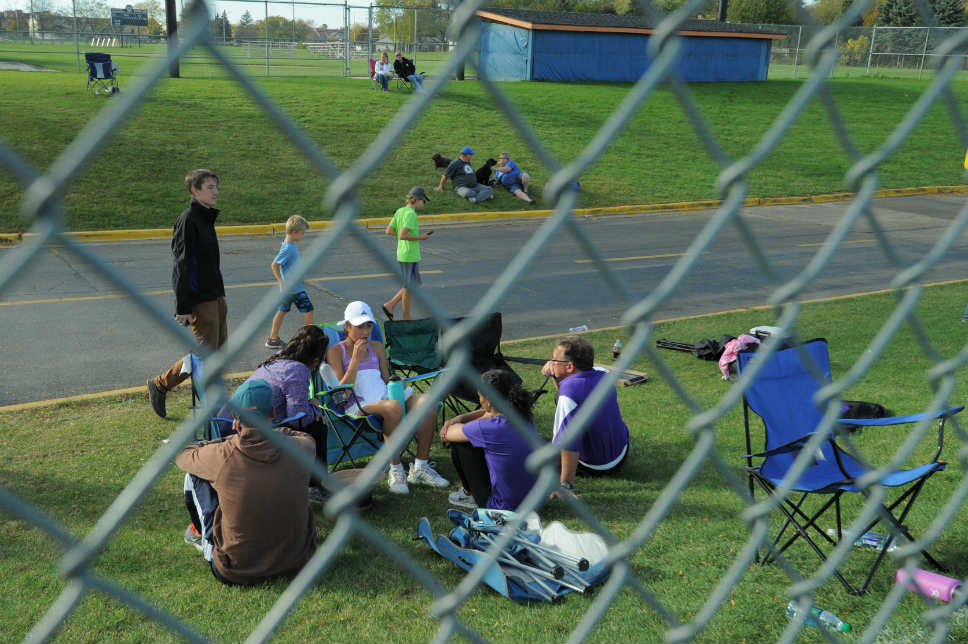 Claudia Miller sits down with her coaches before the third set of the third-place match. PHOTOGRAPHY BY PATRICK GORSKI 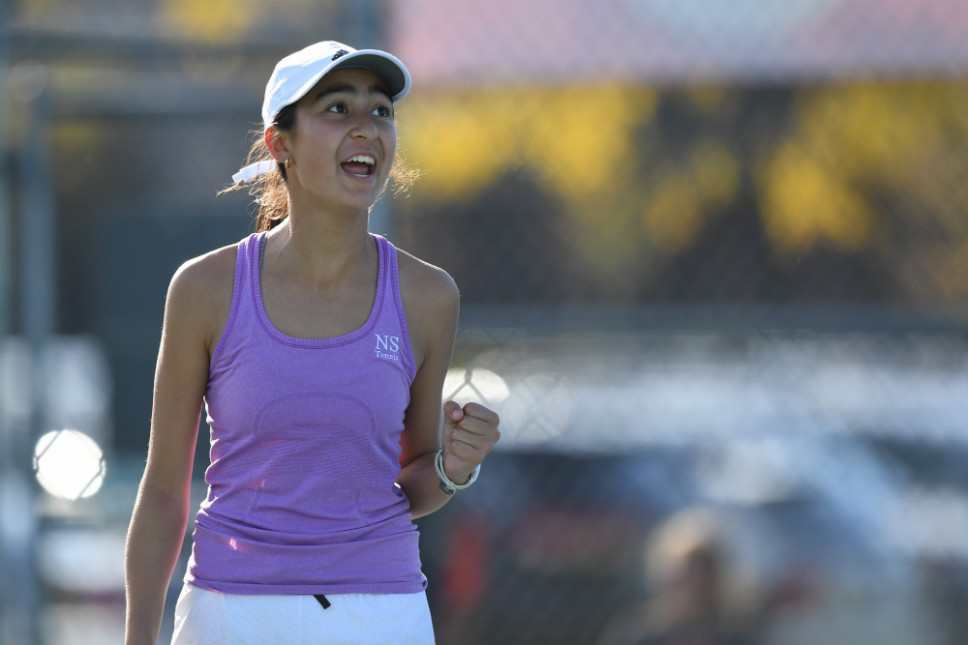 Claudia Miller pumps a fist after winning a point in the third-place match. PHOTOGRAPHY BY PATRICK GORSKI 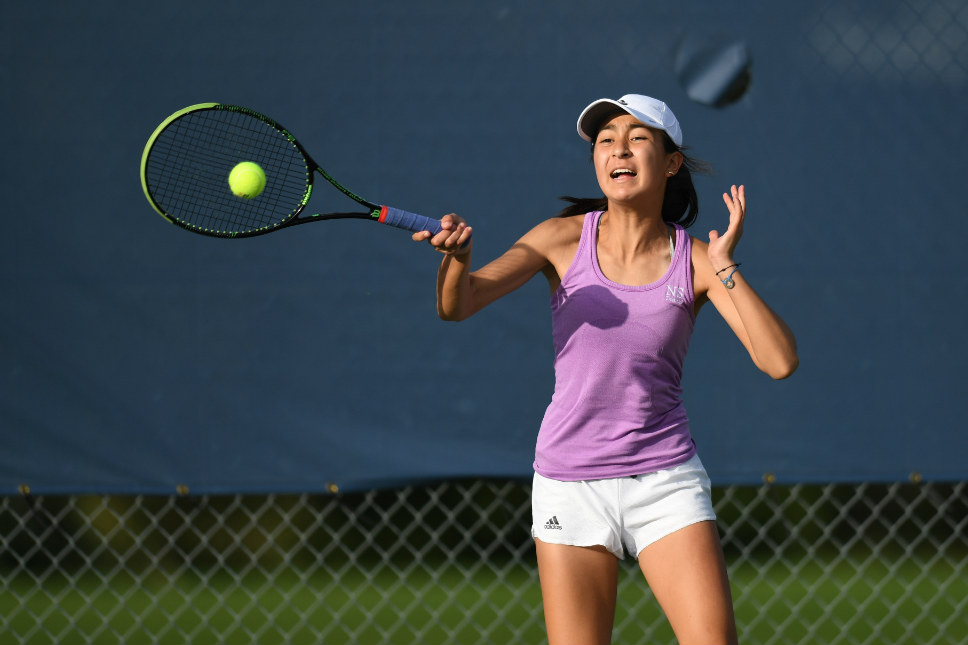 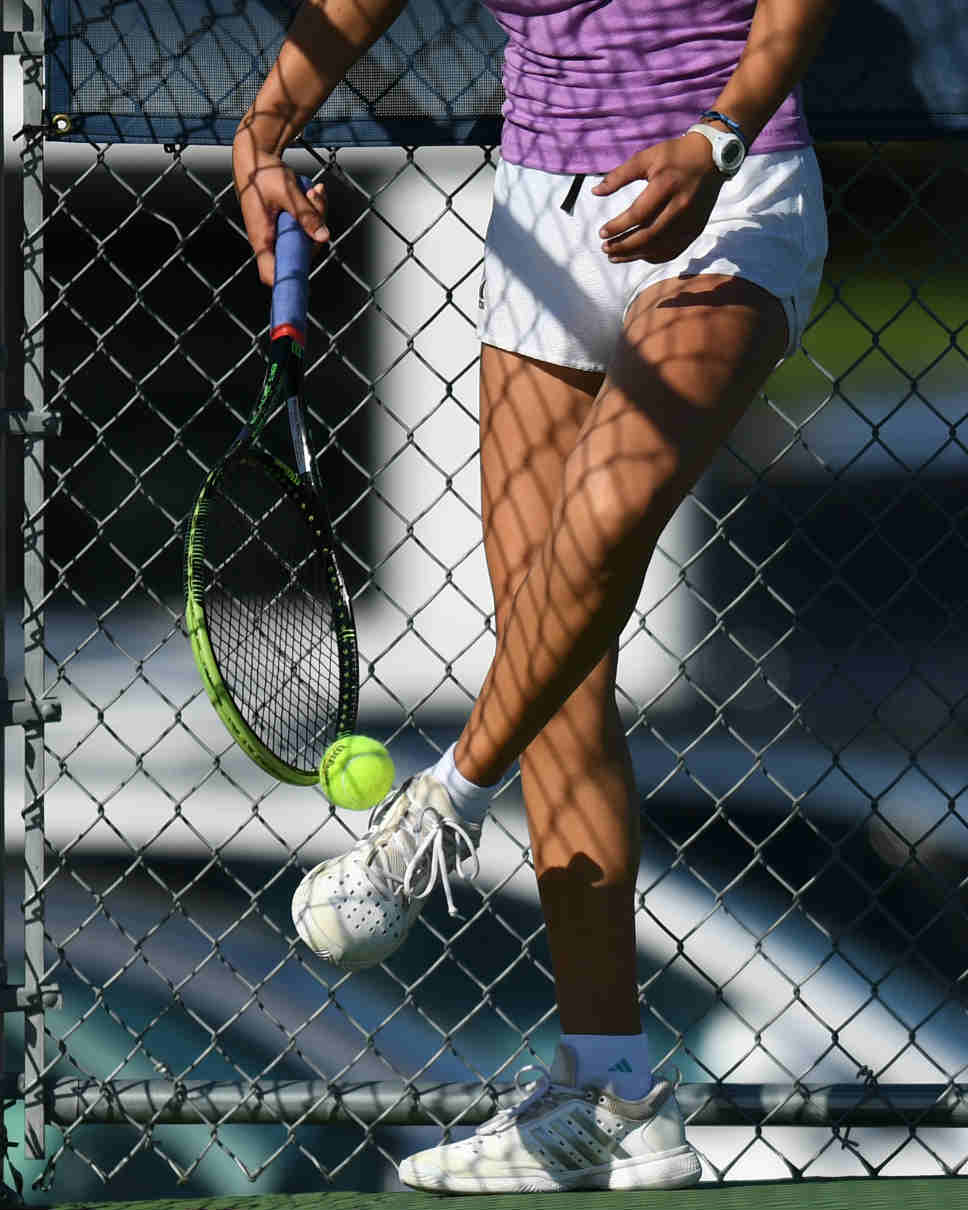 Claudia Miller picks up a ball in between points. PHOTOGRAPHY BY PATRICK GORSKI 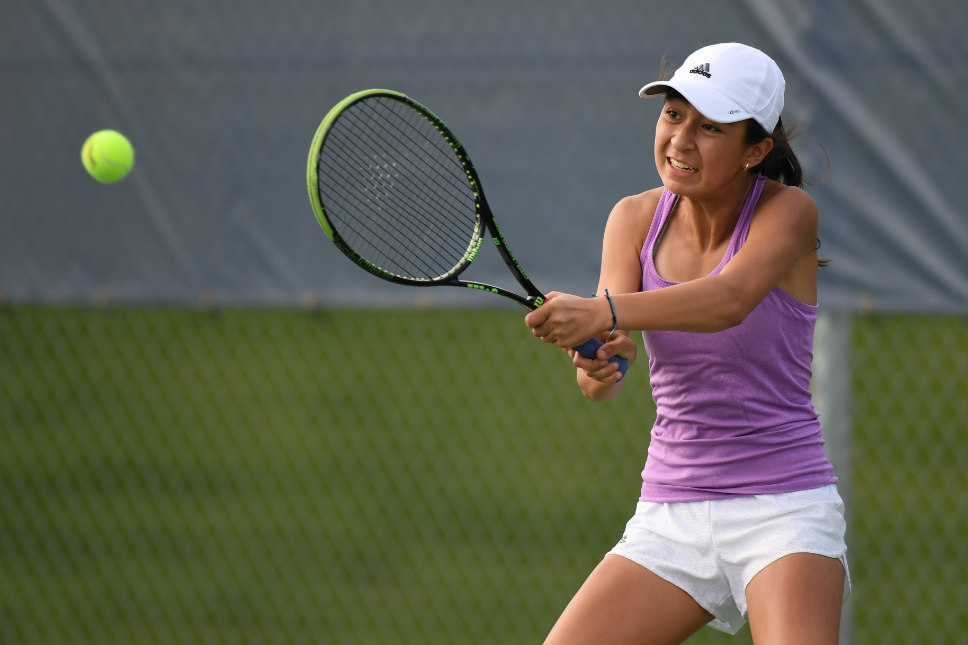