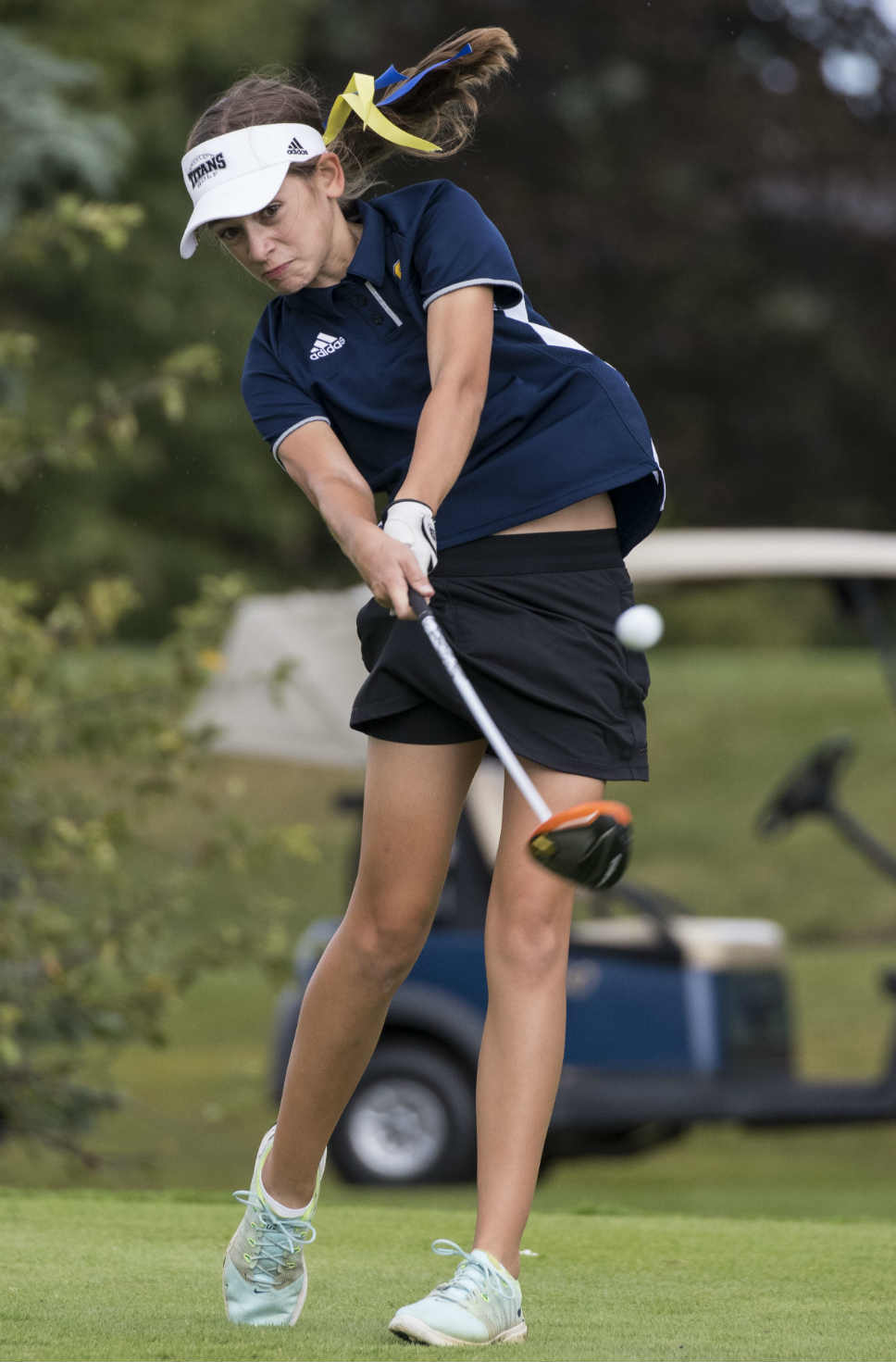 Maria Perakis of the Titans swings away during regional action earlier this fall. She finished in the top 20 at the state meet. PHOTOGRAPHY BY JOEL LERNER

The freshman made a statement.

Glenbrook South’s Maria Perakis came up with an impressive finish in her first IHSA state meet. Her 36-hole score of 152 placed her in tie for 19th at the Class 2A state meet at Hickory Point Golf Club in Decatur on Oct. 13-14.

Perakis got out to a great start. On Day One, she shot a 35 on the front nine and added a 39 on the second nine.

Glenbrook South finished 11th as a team with a 668, while New Trier took the title with a 603.

Highland Park: The Giants’ lone state qualifier, junior Julia Shafir, finished 54th at state in Forsyth, carding a two-day total of 162 (77-85) — tied for the fourth-best state showing in program history. Only two other Giants had shot a lower state round than the 77 Shafir recorded on Oct. 13. 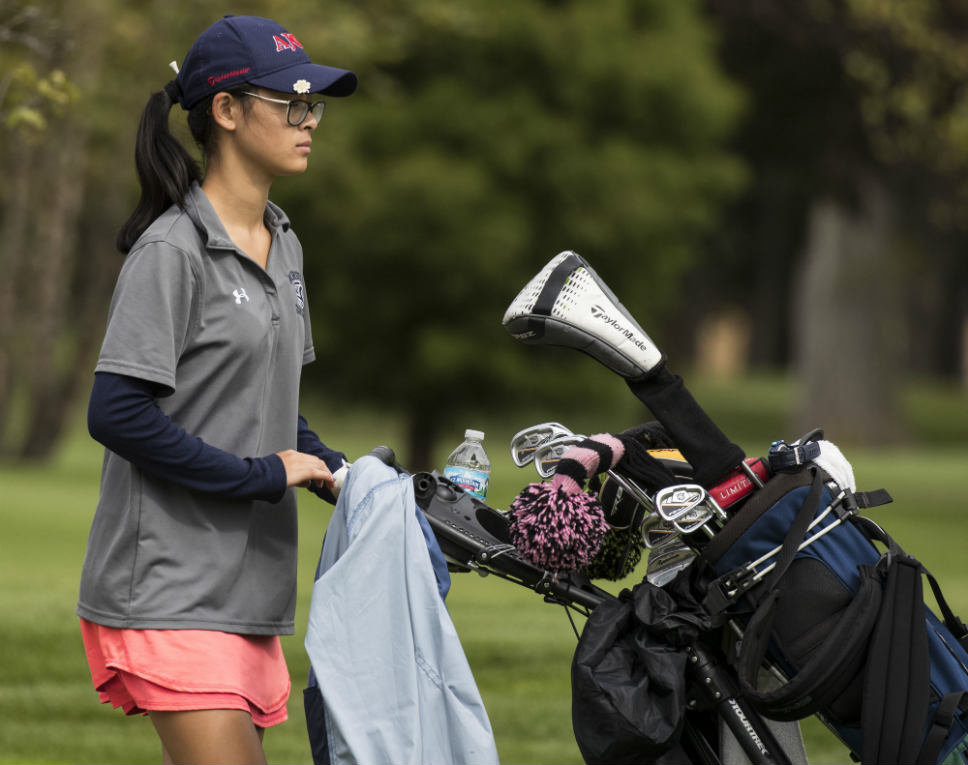 The sister combo of Audrey and Penelope Tir highlighted New Trier’s first-place showing at the Class 2A Wheaton Academy Sectional at Pheasant Run on Oct. 9. The Trevians shot a 300 to win the event by 14 strokes over runner-up Loyola Academy. Glenbrook South also advanced to this weekend’s state meet in Decatur by placing third with a 319.

Seniors Rachel Rhee (77) and Megan Gabor (78) were NT’s other scorers. Juniors Abbie Kaestle (80) and Lizzie Kenter (84) were the team’s other competitors.

Hanna Tanaka turned in a standout performance for Glenbrook South. The junior shot a 71 to earn runner-up honors, one stroke in back of medalist Nicole Hansen of Lake Park.

Maria Perakis continued her fine freshman season with the Titans by carding a 75 to share sixth place with Fenwick’s Stephanie Mroz.

GBS senior Sophia Lau came in with a 78.

Meanwhile, Glenbrook North junior Ashley Choi kept her season alive. She qualified as an individual with a 78.

— Highland Park’s Julia Shafir will cap her junior season with a trip to the state meet this weekend.

She shot a 79 at the Class 2A Barrington Sectional on Oct. 9. 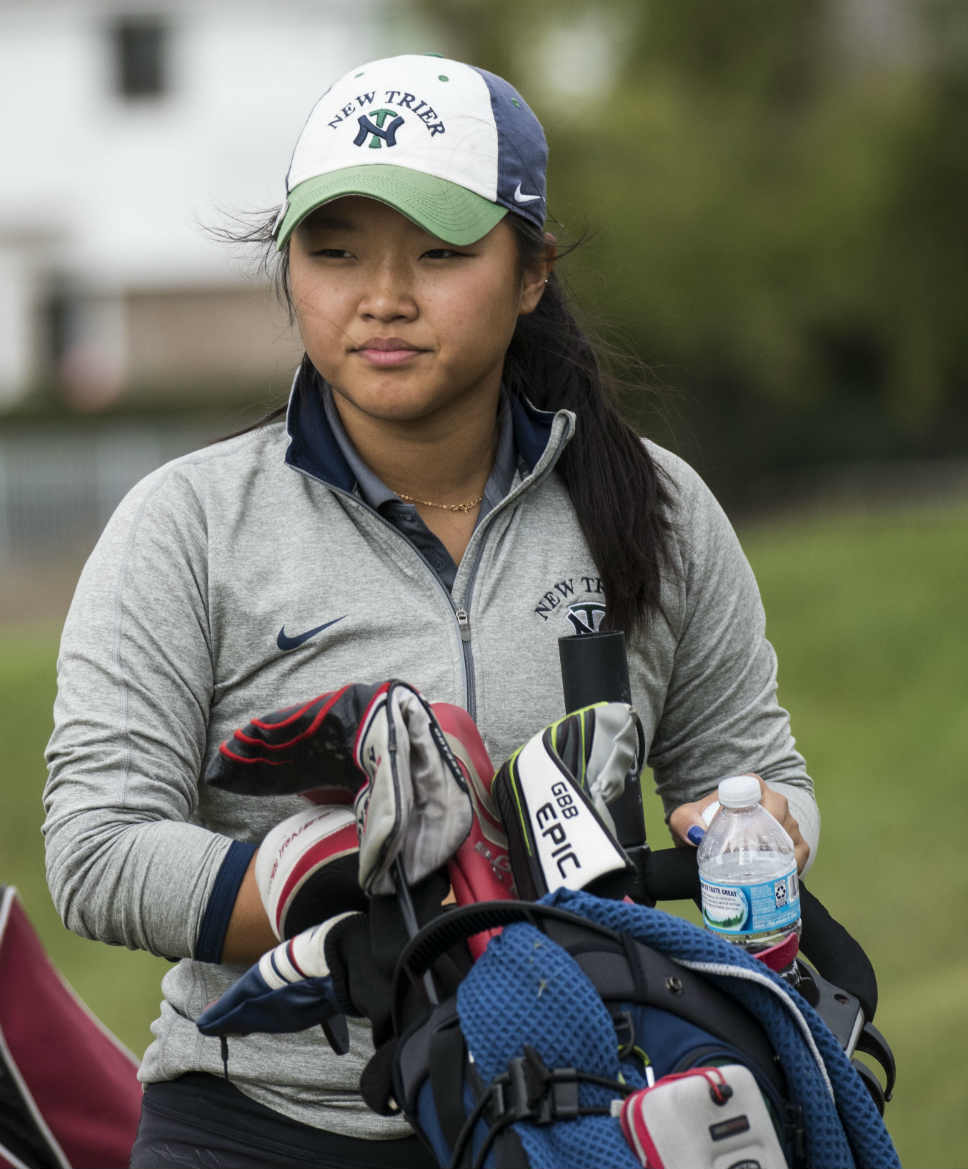 New Trier’s Rachel Rhee takes a break during the regional tournament. She was the medalist. PHOTOGRAPHY BY JOEL LERNER 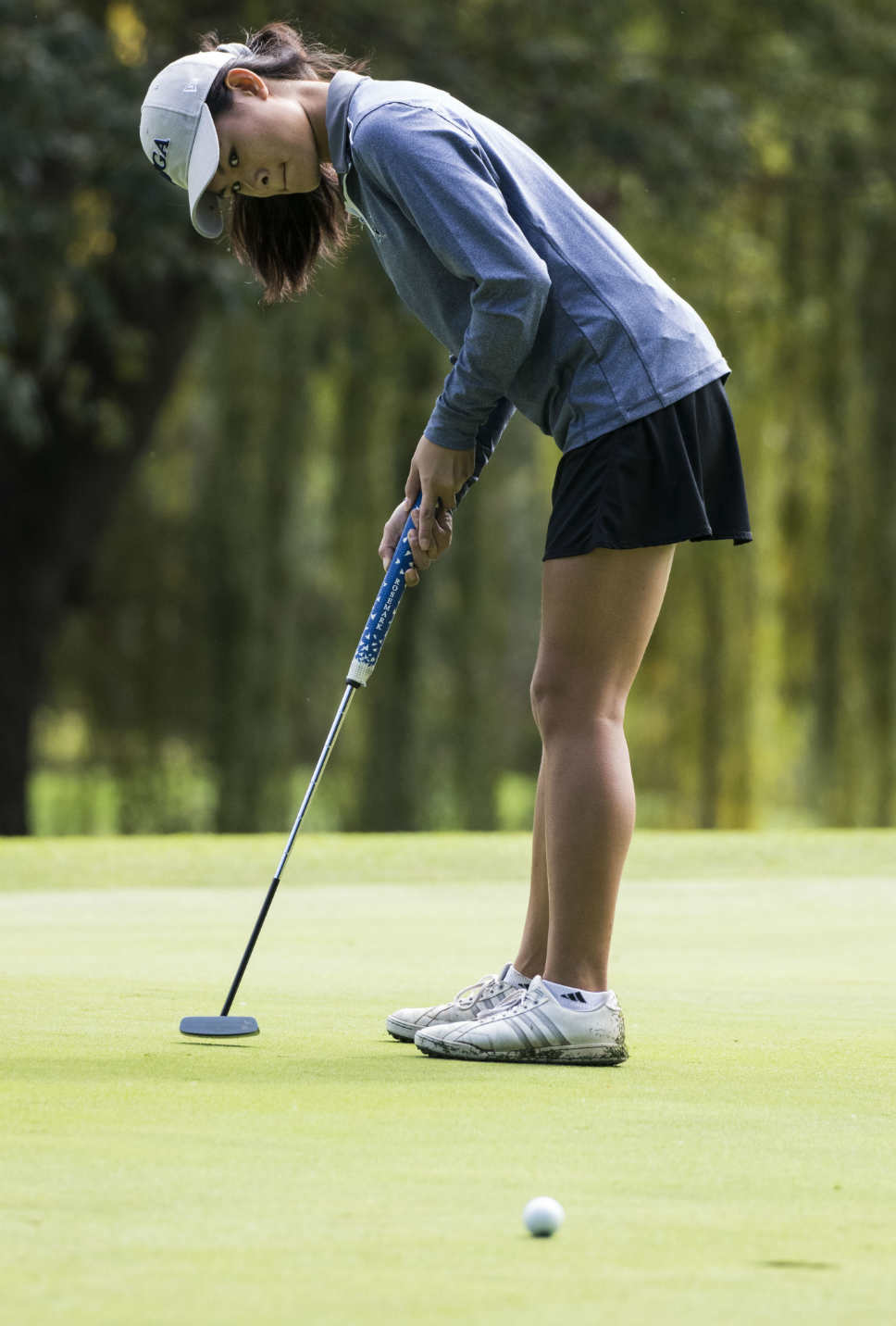 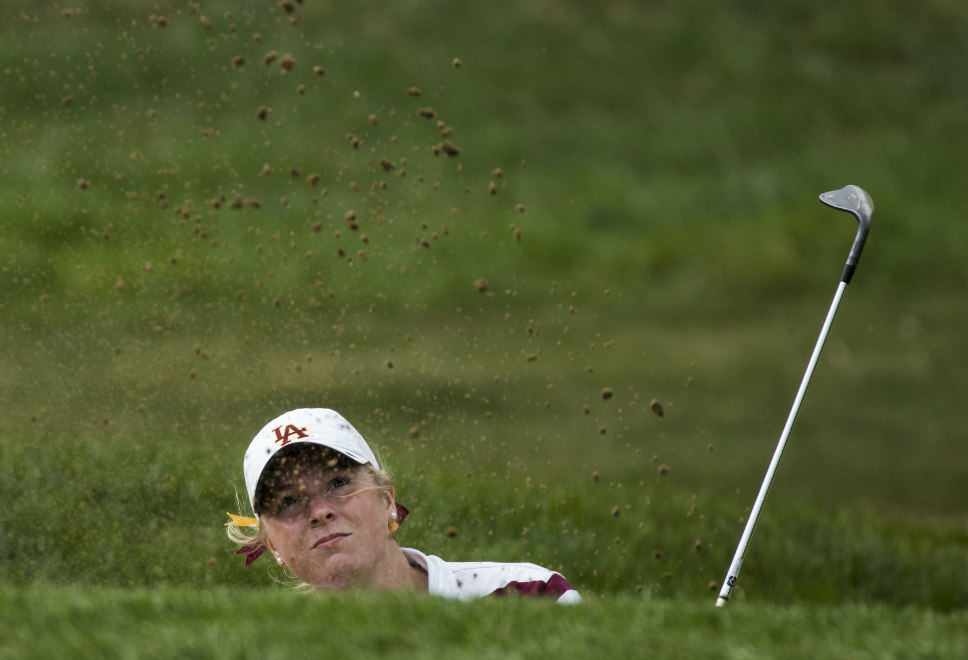 Loyola Academy’s Lilly Gentzkow shoots out of sand trap at the regional. She finished in a tie for third. PHOTOGRAPHY BY JOEL LERNER 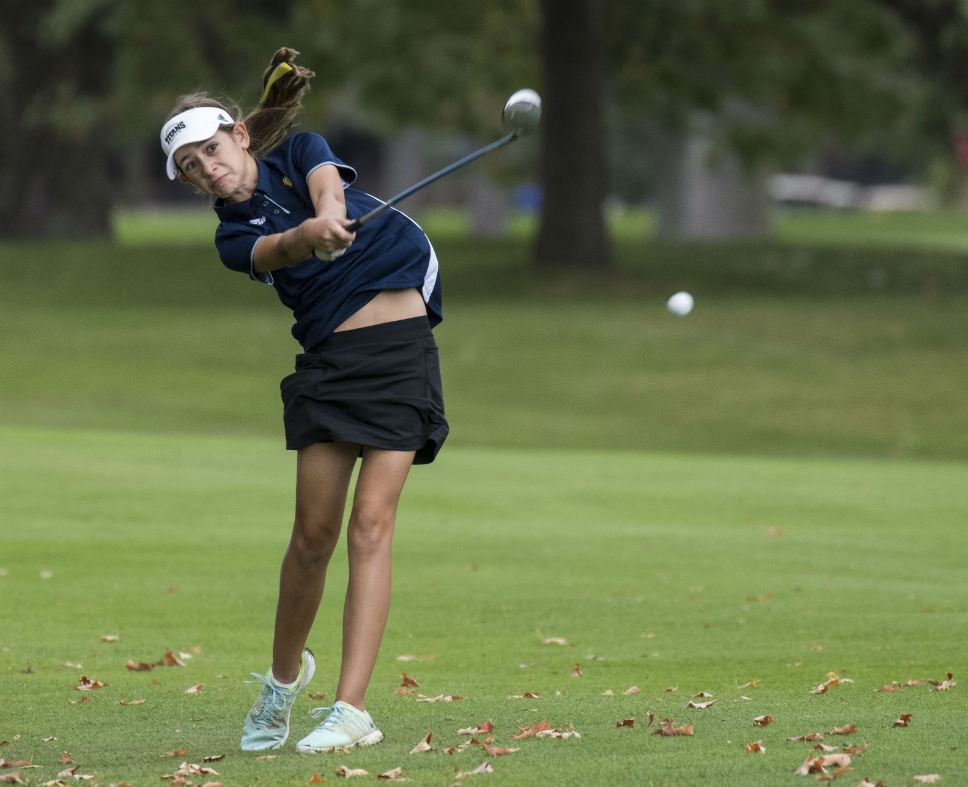 Glenbrook South freshman Maria Perakis swings away at the regional. She shot a 77 to finish in a tie for third. PHOTOGRAPHY BY JOEL LERNER 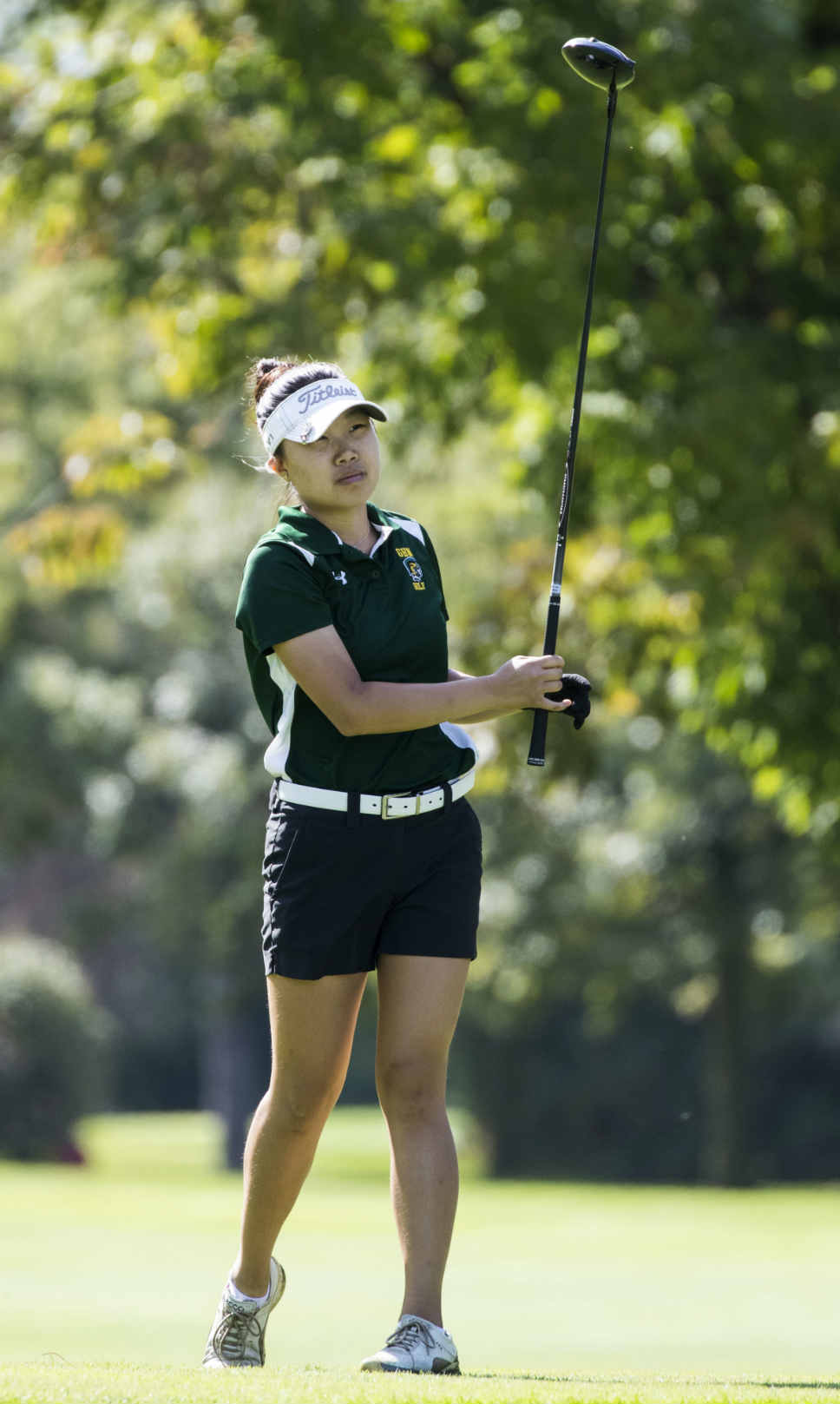 Glenbrook North’s Ashley Choi watches her drive at the regional. She advanced with an 81. PHOTOGRAPHY BY JOEL LERNER

— Rachel Rhee rose to the occasion.

Which is nothing new for the New Trier standout. The senior shot a 71 to earn medalist honors at the Class 2A Glenbrook North Regional at Sportsman’s Golf Club on Oct. 4.

Rhee’s strong outing paved the way for the Trevians, who finished at the top of the leader board with a 301. Loyola Academy (316) and Glenbrook South (326) also qualified to the Wheaton Academy Sectional on Oct. 9. 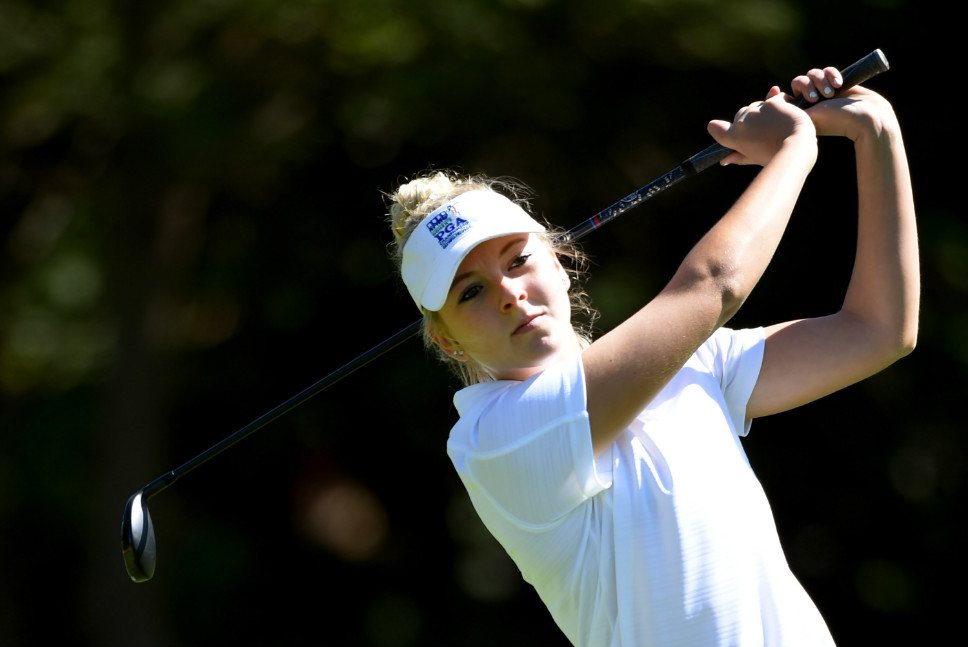 — Nothing bittersweet about this.

Lake Forest came out as one of the advancing teams in the Class 2A Warren Regional on Oct. 4.

The Scouts scored a 377 to take third place behind Carmel Catholic (364) and Vernon Hills (368) at Bittersweet Golf Course in Gurnee.

It was a particularly good outing for junior Erin Shalala. She shot an 89 for fourth place.

The sectional will be held at Makray Memorial Golf Course in Barrington on Oct. 9. 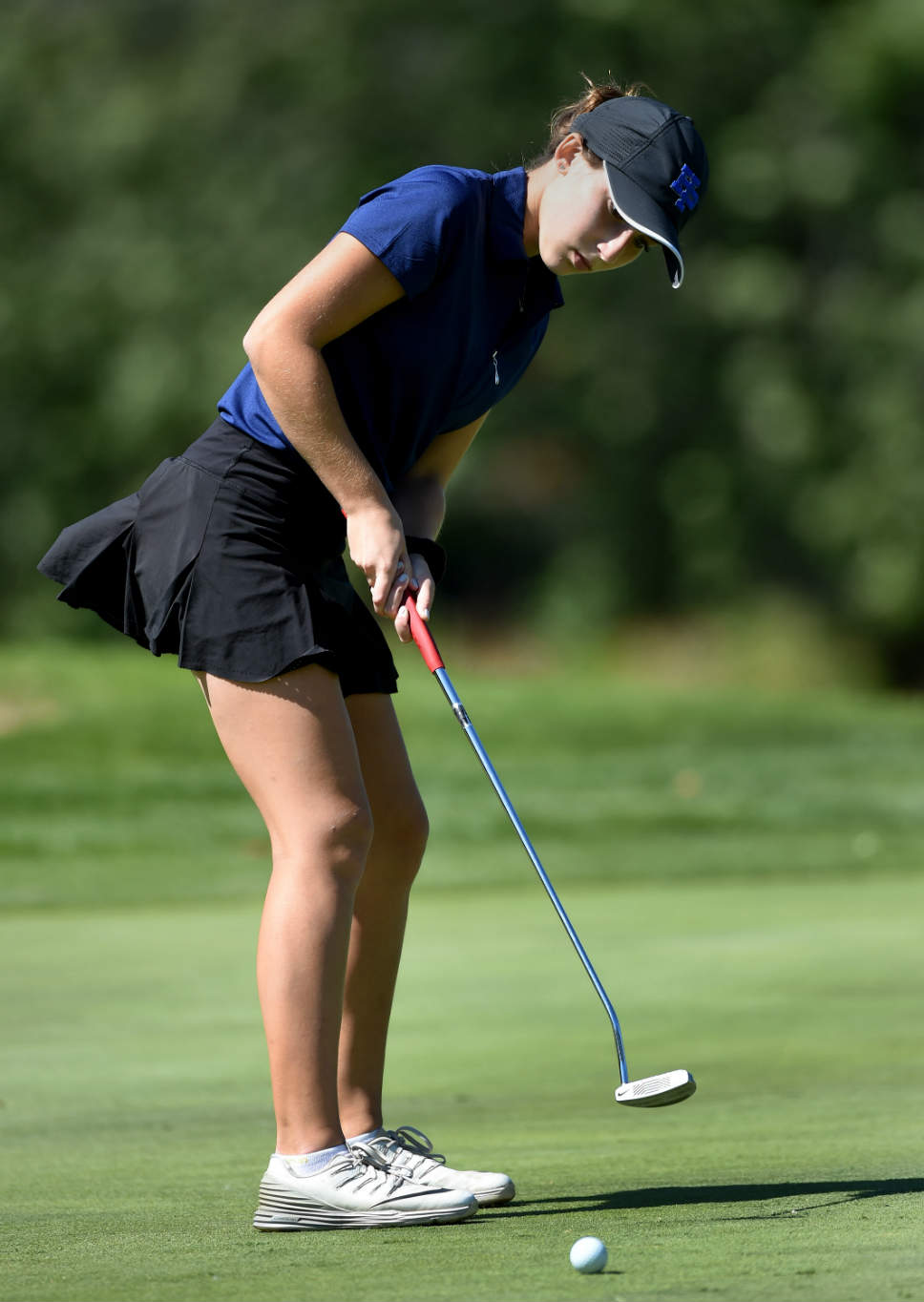 Shafir qualified by shooting an 83 at the Class 2A Palatine Regional at Palatine Hills Golf Course on Oct. 4. Berardi advanced with an 87. 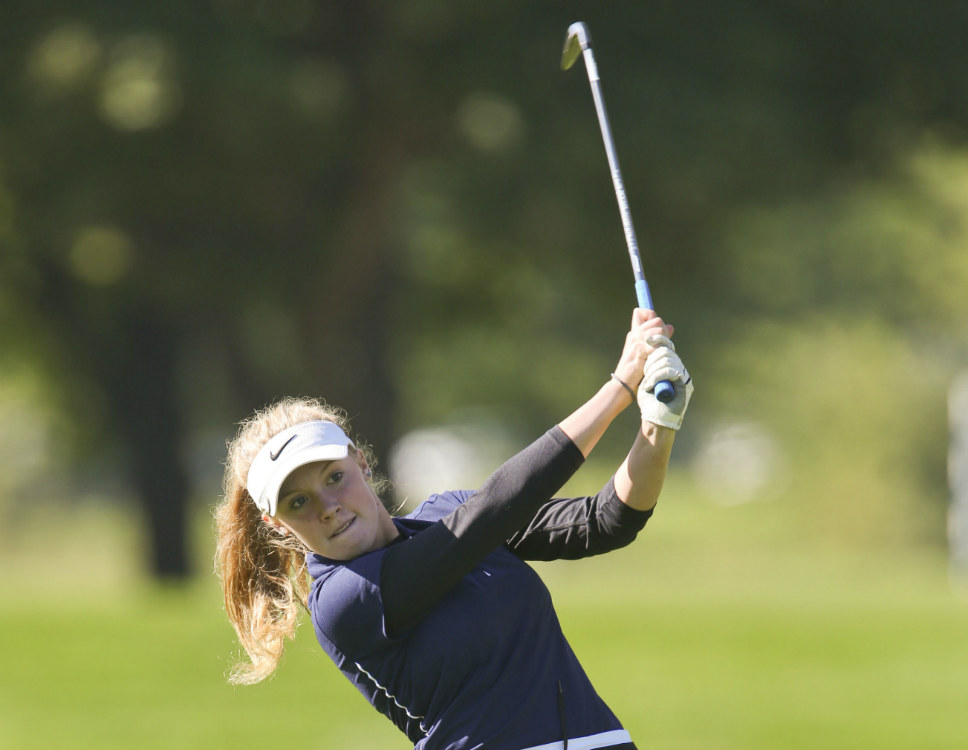 — Penelope Tir tore it up.

The New Trier standout shot a 68 to earn medalist honors at the Central Suburban Conference tournament at Wilmette Golf Club on Sept. 27.

Tir and her teammates ended up winning the team title with a 307.

Rutkowski carded a 35 on the front nine and a 37 on the back nine. Her 72 was backed up nicely by two teammates who finished in the top five: Tatum Koehn (73) and Grace Kryscio (79). Mary Boesen and Shea Graf added 80s. 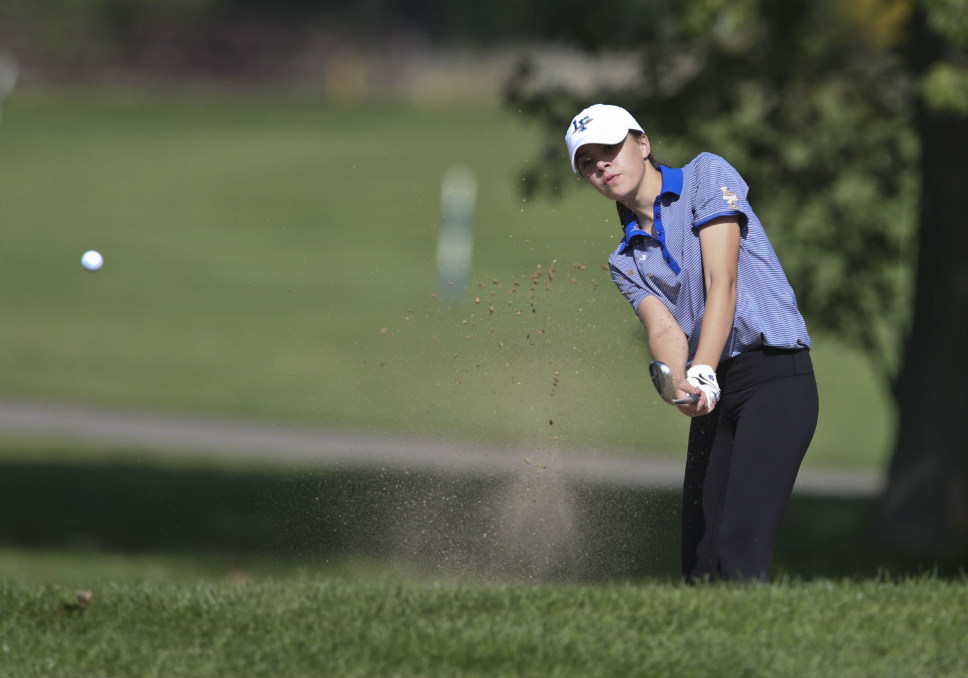 Lake Forest’s Erin Shalala finished in a tie for fourth at the North Suburban Conference tournament. PHOTOGRAPHY BY JOEL LERNER

Shalala carded an 87 on the Bonnie Brook Golf Course on Sept. 27, placing her in tie for fourth with Stevenson’s Katie Hannahs.

As a team, the Scouts finished fifth with a 377. Stevenson cruised to the title with a 326, which was 41 strokes better than runner-up Libertyville. Warren took third (370), while Lake Zurich was fourth (374). 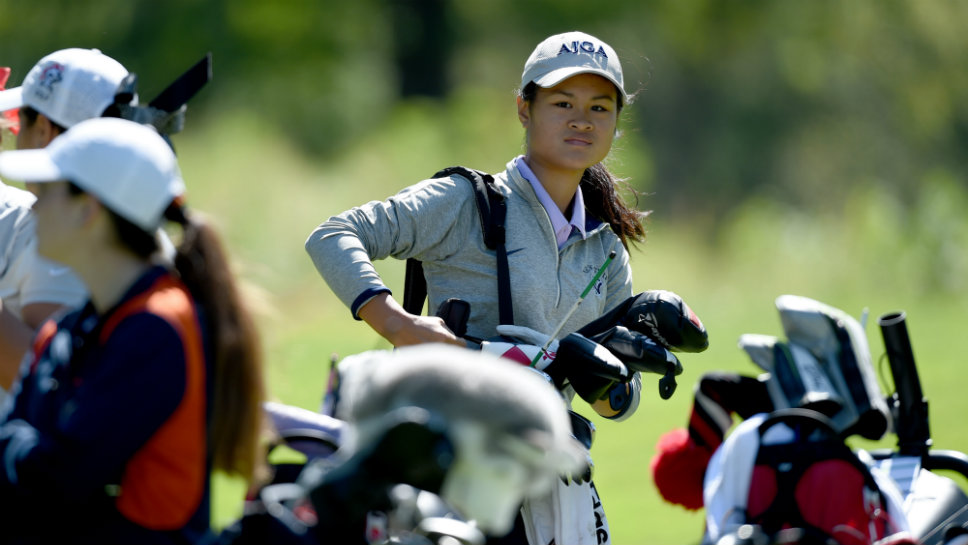 — It’s pretty safe to say that she’s taken a liking to this course.

Tir claimed medalist honors in a tough field at the Decatur Eisenhower Invite on Sept. 16. And she did it in impressive fashion. Her 69 edged Loyola Academy standout Nina Rutkowski by two strokes. Barrington star Nicole Ciskowski was third with a 72, one stroke better than her teammate, Caroline Smith.

Team-wise, things couldn’t have been any closer. The two North Shore schools shot 306s with Loyola winning the tie-breaker. Barrington placed third with a 310.

— Both Highland Park and Lake Forest had a pair of top-10 finishers at the Deerfield Invite on Sept. 16.

Lake Forest, which placed sixth in the eight-team meet with a 374, received strong play from Isabella Martino (83) and Clare Green (83). 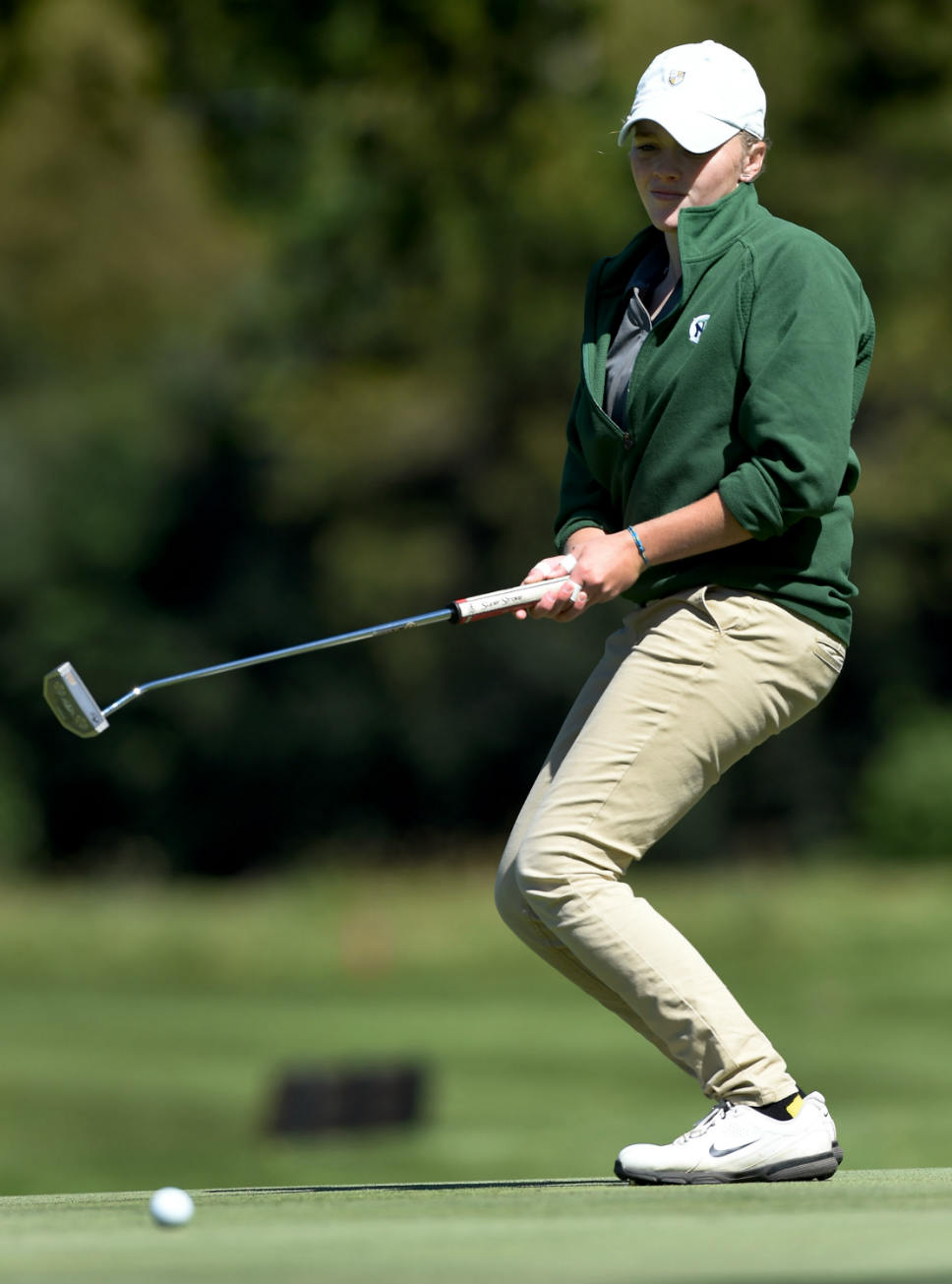 New Trier’s Lizzie Kenter reacts as her first putt on the 15th hole at Bonnie Brook comes up short. PHOTOGRAPHY BY ROB DICKER 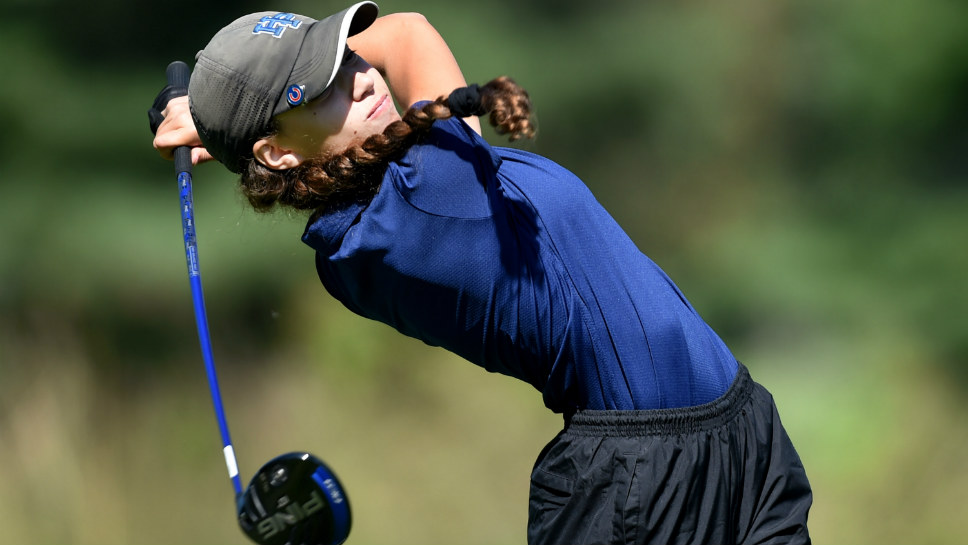 Highland Park’s Jennifer Berardi tees off during play in the Waukegan Invite. She shot an 81 for 13th place. PHOTOGRAPHY BY ROB DICKER 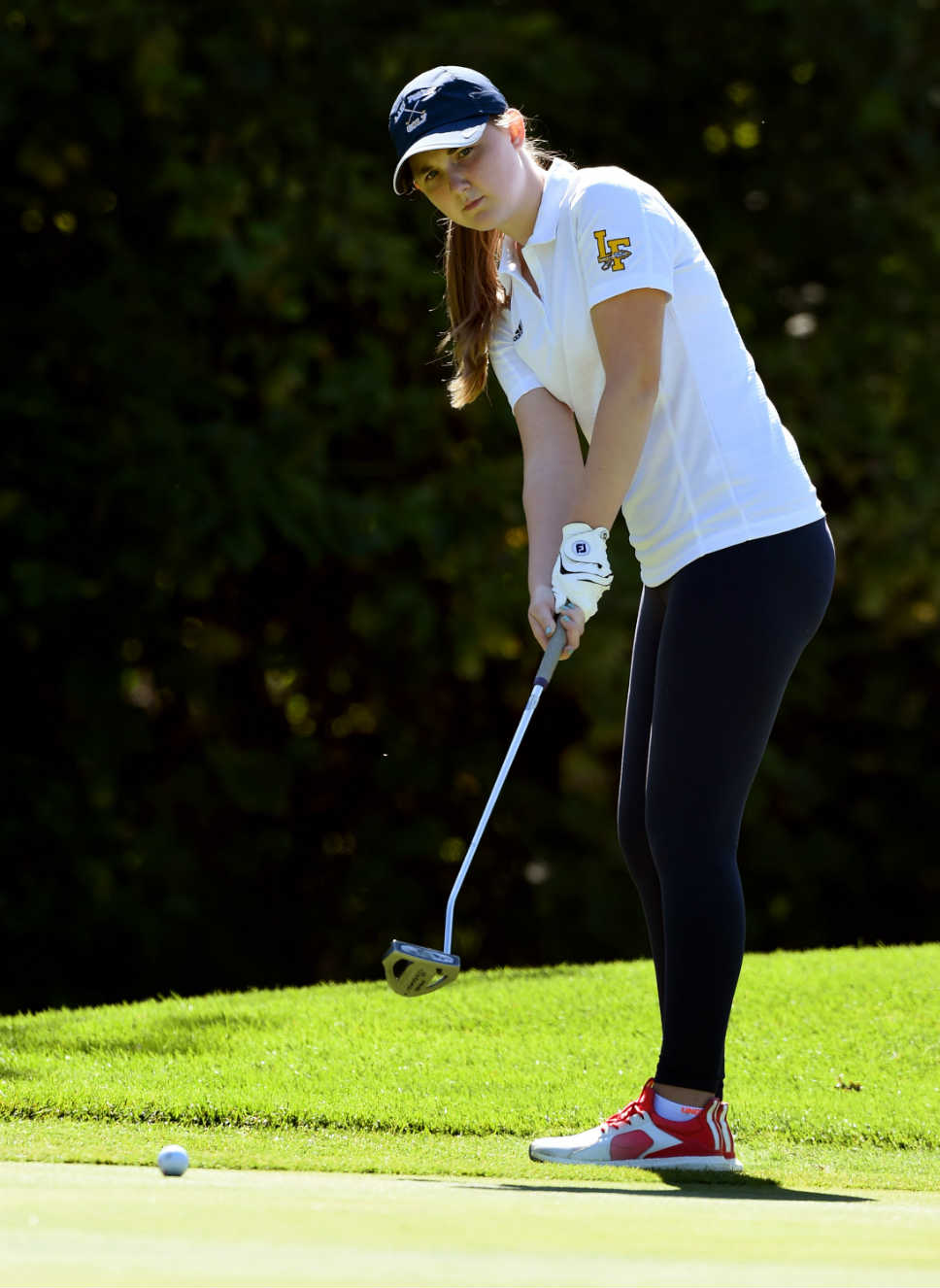 Clare Green of Lake Forest follows through on her putt on 12th hole at Bonnie Brook. PHOTOGRAPHY BY ROB DICKER

— This kind of shooting wins a lot of invites.

But not this one.

New Trier had six players record 84 or better at the Waukegan Invite at Bonnie Brook on Sept. 9 and wound up in a tie for third (323) with Naperville North. Barrington shot a sizzling 311 to finish atop the leader board, five strokes better than runner-up Lincoln-Way Central.

HP’s other scorers were Samantha Fahn (90) and Emilia Schwenk (96).

Clare Green and Erin Shalala shared the same score (96) for the Scouts.

Both golfers shot 78s to finish in a tie for seventh place. Their efforts helped the Giants to a third-place team finish (322) behind Deerfield (316) and Stevenson (317). Barrington settled for fourth (337), while Lake Forest came in fifth (347).

Two of the state top placers — Deerfield’s Elyse Emerzian and Barrington’s Nicole Ciskowski — battled it for medalist honors. Emerzian wound up the winner (72) by one stroke.

The junior shot a hole-in-one to help her team take third place (379) at the Libertyville Invite at Pine Meadow on Aug. 17.

Highlighted by Elyse Emerzian (74), Deerfield topped the leader board with a 359. Lake Forest came in second (371).

Rutkowski shot a 72, while teammate Lilly Gentzkow finished fifth with an 80.

— Led by Maria Perakis, Hanna Tanaka and Sophia Lau, Glenbrook South turned in an impressive performance at the Hersey Invite at Arlington Lakes on Aug. 19.

The team’s other scorer was Ysablla Arrojo (85).

— New Trier’s girls golf team is off to a terrific start. The Trevians have opened the 2017 campaign with back-to-back team championships.

Standouts Penelope Tir and Rachel Rhee led the way on Aug. 17, when NT took first place in the Barrington Classic at Lake Barrington Shores. The Trevians claimed the title with 298, seven strokes better than the host Fillies.

Tir, a junior, beat par with a 70, sharing the top spot with Barrington’s Nicole Ciskowski.

Rhee carded a 73, which placed her in a tie for fourth with Barrington’s Caroline Smith.

Loyola Academy senior Nina Rutkowski shot a 72 for third place. The Ramblers placed third in the team standings with a 323.

Glenbrook North finished in a tie for fourth place (373) with Wheaton Warrenville South. Libertyville was sixth (404).

Meanwhile, the Trevians shot a 316 to win the season-opening Prospect Invite on Aug. 11. St. Charles North was the runner-up (326).

Rhee paced NT with a third-place score of 75 (36-39). Audrey Tir took ninth with a 79. Penelope Tir did not play, while Kaestle and Gabor recorded 81s.

Rachel Rhee paced NT with a third-place score of 75 (36-39). Audrey Tir took ninth with a 79. Penelope Tir did not play, while Kaestle and Gabor recorded 81s.

— Highland Park opened the season with a fifth-place finish at the Barrington Invite on Aug. 10.

Glenbrook South finished in a tie for sixth (348) with Lake Zurich, while Lake Forest came in eighth (353). The host Fillies took first with a 295.